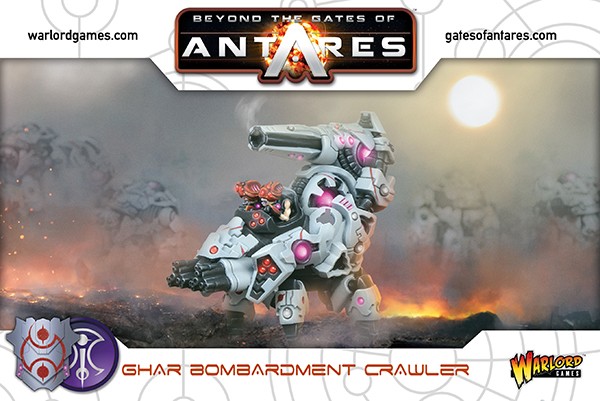 Not even the heaviest cover will save your enemy from this heavy war machine!

Packing the heavy disruptor Bomber plus x2 Scourer Cannon, any shot from this walker can guarantee no one walks away unscathed. Using their standard crawler design the Ghar have created a variant of crawler that rains heavy shells down onto their adversary.

Disruptors are all bomb­like shells, which release a powerful quantum gravity blast when they explode. This tears apart physical matter, wreaking havoc with sophisticated nano­based technologies, and creating residual spacial distortion that can often render battleﬁelds uninhabitable for years. Only the Ghar are reckless or ignorant enough to tamper with the physical cohesiveness of the universe in this way.

Using such experimental weaponry has its risks, but the Ghar do what they need to ensure victory. At 256 + points and having such a powerful weapon you’ll want to ensure that you can fire nearly every round; With its extreme range you can set it up anywhere knowing it will still be able to reach out and touch its target from turn 1. Being mounted on the standard crawler also means it has MOD 2 ie 2 activation dice = move then fire or stand and fire twice in a turn! Combine this with a RES 13 it can withstand a large amount of punishment. This will force your opponent to either sent a decent size force to destroy it or let your bombardment crawler continue shelling their lines…