BoLS wraps up our Codex Traitor Legions coverage today with a look at the Nurgle’s own – the Death Guard’s rules!

The Traitor Legions are upon us! Fourteen years after 2002’s release of the beloved CSM 3.5 codex full rules for all nine traitor legions are here! These are each a unique army that will open up the game to dedicated CSM players who find the default codex a little plain.  Every one of the nine gets some serious love.

GW has pulled off giving each Legion a distinct feel via 9 sets of Legion restrictions and special rules, warlord traits, relics (some very very distinctive and fluffy), and of course a detachment.  While I personally think some are more fluffy and cool than others, everyone got some of the GW design studio love.  There are however some standouts that will be altering the meta.  More on those this week.

Now, onto what you came for, let’s crack open the covers and see what makes the Death Guard sick, I mean tick: 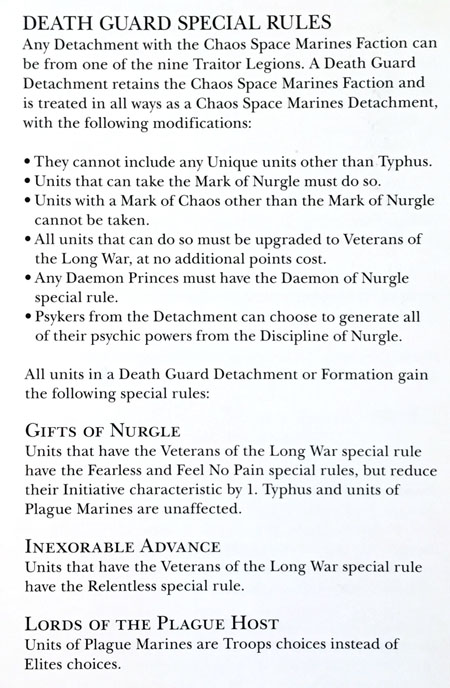 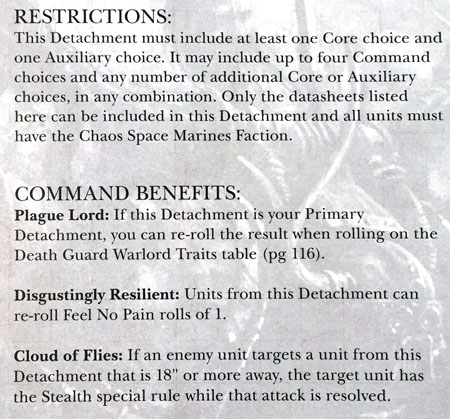 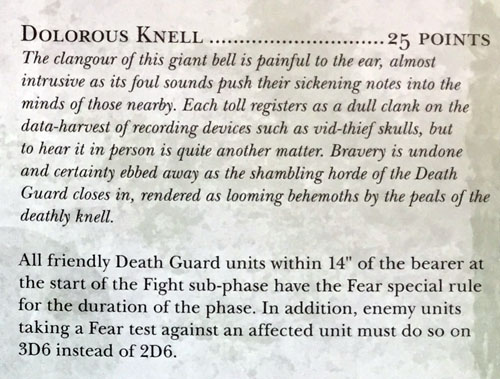 They Will Not Die

The Death Guard are back with a sickly vengeance. The jury is still out on whether they are THE most potent legion in the new Codex, but Grandfather Nurgle has been spreading his warm infectious love upon his favorite children.  They are certainly one of the best in the book.

The Legion special rules are solid and to the point for a Cult Legion. We have only Mark of Nurgle allowed (duh) plus mandatory and free Veterans of the Long War. Typhus is your only named character allowed,  Daemon princes must take Nurgle powers and marks.  In exchange for this, you get Plague Marines moved to TROOPS choices and all your VotLR infantry gain Fearless, Feel No Pain, -1 Initiative (except Typhus and Plague Marines). Most importantly all VotLR gain Relentness!  Ok, now let’s think about this for a second… see it yet… HAVOCS!  Death Guard Armies now will be full of official Plague Marines and a bunch of “Really Sick Marines” who can move and fire heavy weapons.  Remember back in the 3.5 codex when the Death Guard were limited to only using Heavy Bolters… well now they can take anything from the standard CSM codex. Just think of the many uses a squad with relentness: Las-Cannons, Missile Launchers, Autocannons and even Heavy Bolters can find.

Moving onto the potent Vectorium Detachment we get an improvement of Feel No Pain and Stealth of ALL units in the detachment if they are more than 18″ away from the firer. That +1 cover save for your entire army is going to come in very handy, especially on top of all that Feel No Pain with rerolls.

Moving onto our sample Relic, the Dolorous Knell may be the real tabletop Bell of Lost Souls. It’s got a cool Fear radius effect that won’t radically alter the game, but is still very flavorful in a not too pricey relic.  Grandfather Nurgle approves!

~We’ve had a great time bring you peeks and coverage of Codex Traitor Legions and there is SO MUCH MORE in the book. Go pick it up this weekend!