BoLS will be bringing you Codex Traitor Legions coverage all week. Today we look at the 8th Legion, the dread Night Lords’ rules!

The Traitor Legions are upon us! Fourteen years after 2002’s release of the beloved CSM 3.5 codex full rules for all nine traitor legions are here! These are each a unique army that will open up the game to dedicated CSM players who find the default codex a little plain.  Every one of the nine gets some serious love.

GW has pulled off giving each Legion a distinct feel via 9 sets of Legion restrictions and special rules, warlord traits, relics (some very very distinctive and fluffy), and of course a detachment.  While I personally think some are more fluffy and cool than others, everyone got some of the GW design studio love.  There are however some standouts that will be altering the meta.  More on those this week.

Now, onto what you came for, let’s crack open the covers and see what makes the Night Lords tick: 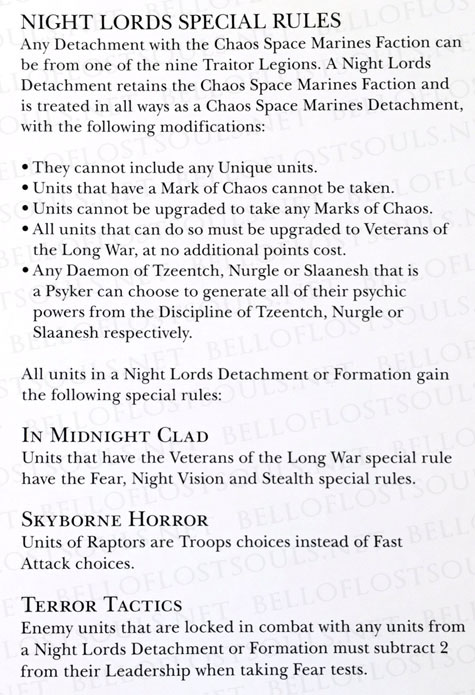 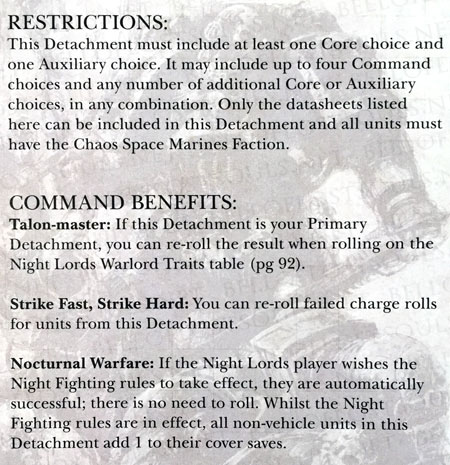 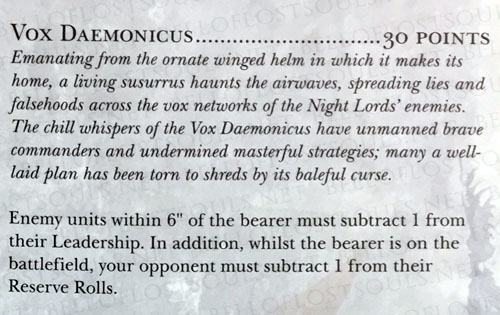 OK, what we have here is an evolution of the Night Lords. Over the editions, (and 30K) the Night Lords have gone back and forth between being “all about” bikers and/or jump pack troops. In their 30K rules, the Night Lords have special rules emphasizing dirty tricks in assault. Fundamentally the Legion has always been about maneuver and assault. This is not a stand back and shoot you off the table army.

Looking at the Legion special rules, we see the hand of GW come down firmly on Raptors (now troops)  and assault. No chaos marks is more than made up for by the mandatory and free Veterans of the Long War.  That should save you a bunch of points.  Now add in the free Stealth, Fear and Night Vision rules to get an idea of how GW is adding flavor and partially balancing out some of the default CSM point cost deficiencies.  For the cherry on top, note the -2 Ld for enemies making those fear tests.  That’s pretty good as all those LD 7-8 units out there will be making tests on a 5-6, which will fail over 50% of the time.

Next look at how the Murder Talon Detachment builds atop this foundation. I think we can safely expect the Night Lords player to make it night every chance they get, so get used to it.  The +1 cover saves, added to the Stealth will frustrate many enemies and the re-rolls on charge distance means the 8th Legion will reach you reliably once they get in close.  It seems likely to expect Night Lords players to go with lots of high speed infantry armed with short range and assault weaponry and to come at you fast while the lights are out.

Finally, savor the sample Relic we are showing off, the Vox Daemonicus.  What I like the most is that is completely fluffy, while having a useful in-game effect. Making enemy reserves unreliable will either splinter armies that try to show up after the fact, or force the majority to the opponent’s force to deploy, giving the Night Lords a known target to fight against.