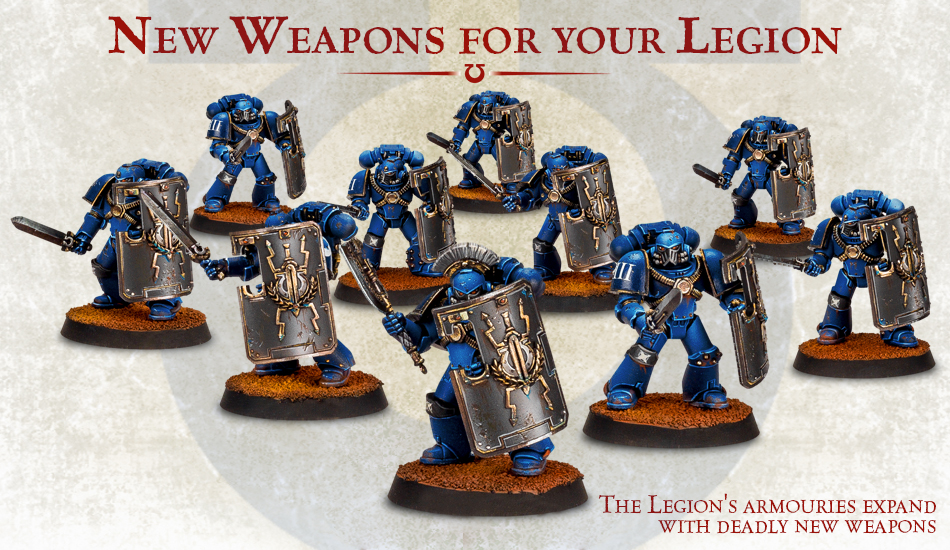 Everyone’s favorite Battletech inspired Dreadnought is getting some new guns along with two new Heresy Era Weapon sets. The Hobbit is getting some new Gunda-Baddies and Blood Bowl’s newest Refs are ready to take the Fantasy Football field! Check out Forge World’s latest below: 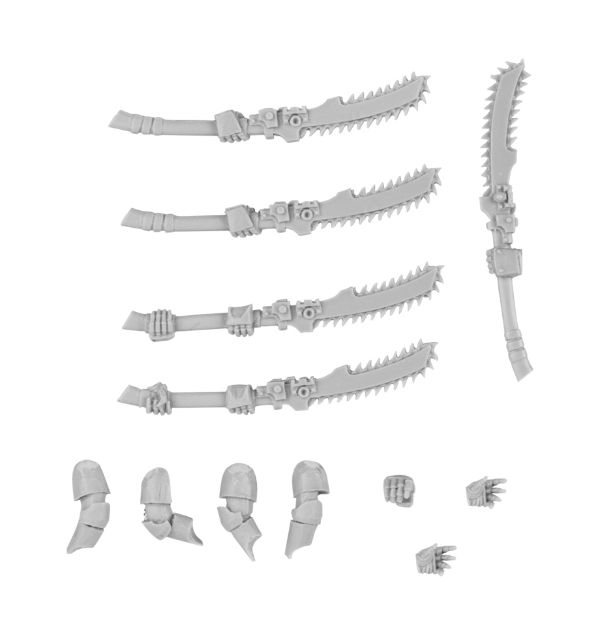 A weapon of terror as much as of physical damage, Nostraman Chainglaives were more powerful than the chainswords commonly wielded in the Legiones Astartes, tearing and shredding through flesh when swung into their wielders foe.  Promising a painful and gruesome death to their victim, the Chainglaive was a weapon of choice among the Commanders and Sergeants of the Legion. 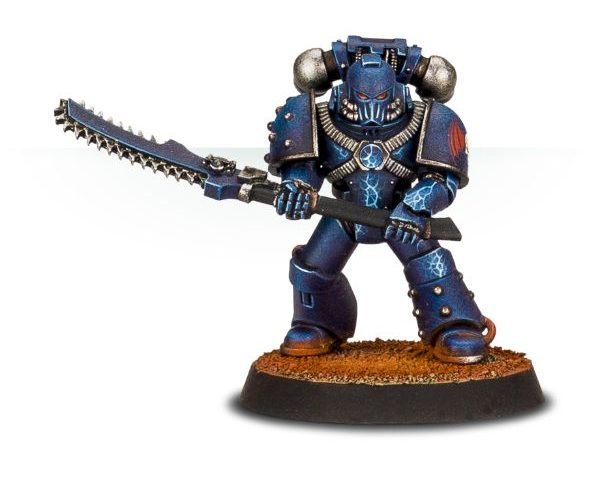 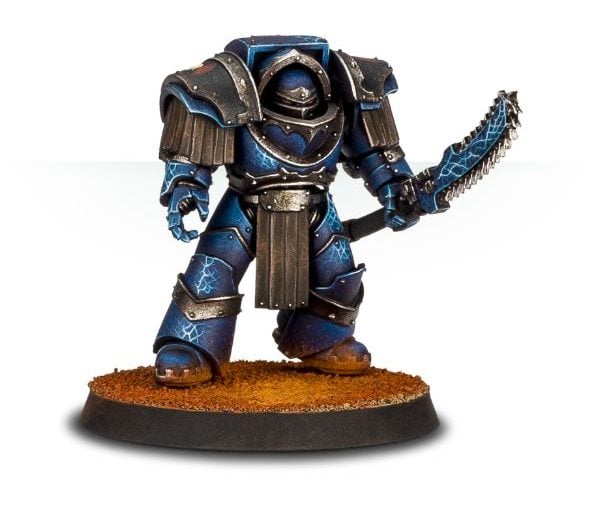 This is a multi-part, resin upgrade set. It can be used with resin and plastic Space Marine kits. 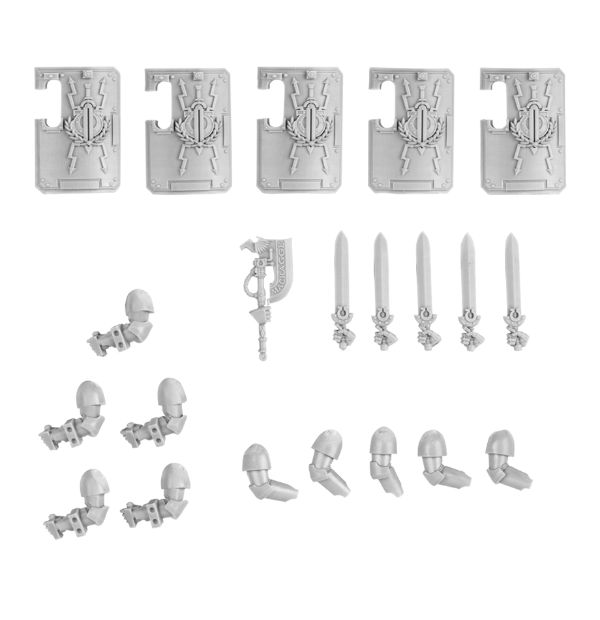 First through the breach in assaulting enemy fortifications or boarding actions, Breacher Siege Squads are equipped with hardened armour and great ablative shields to withstand the enemy’s fiercest attacks and forge a path for the force’s main strength to follow. Breacher Siege Squads of the Ultramarines Legion are often further equipped with power weapons, eschewing the ranged power of the bolter for lethality in close combat. 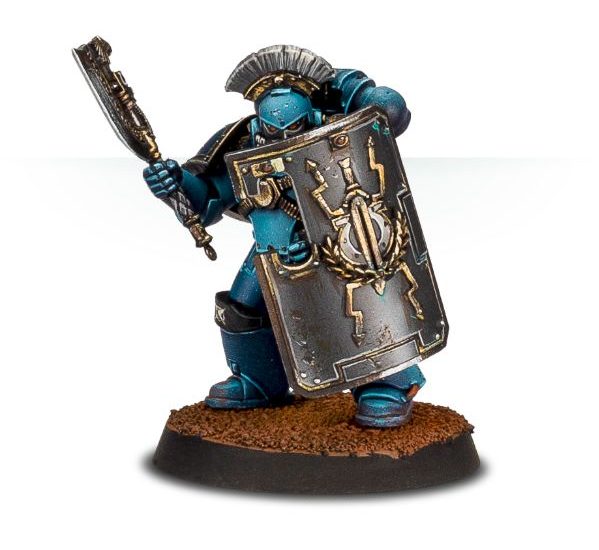 This set includes five ornate Praetorian pattern Breacher Shields, five gladius power swords, five right and five left arms to upgrade five Space Marines to be an Ultramarines Legion Breacher Siege Squad. Also included is a Legatine Axe which can be used to upgrade an Independent Character, or as an ornate power axe for the Breacher Siege Squad Sergeant. 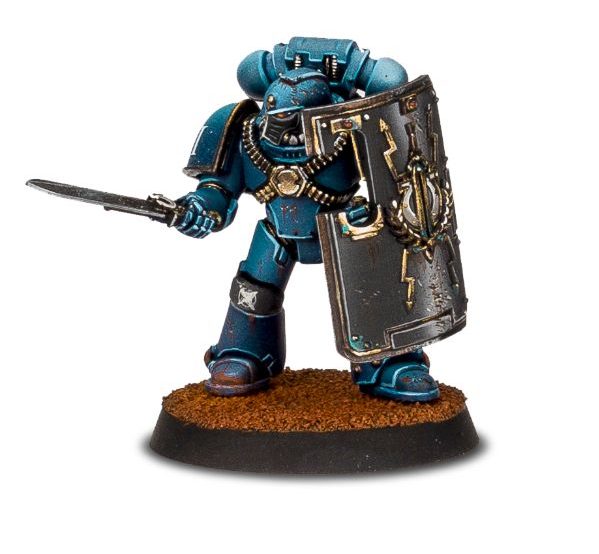 This is a multi-part, resin upgrade set. It can be used with resin and plastic Space Marine kits. Complete models shown were built using Space Marines in Mk IV Power Armour. 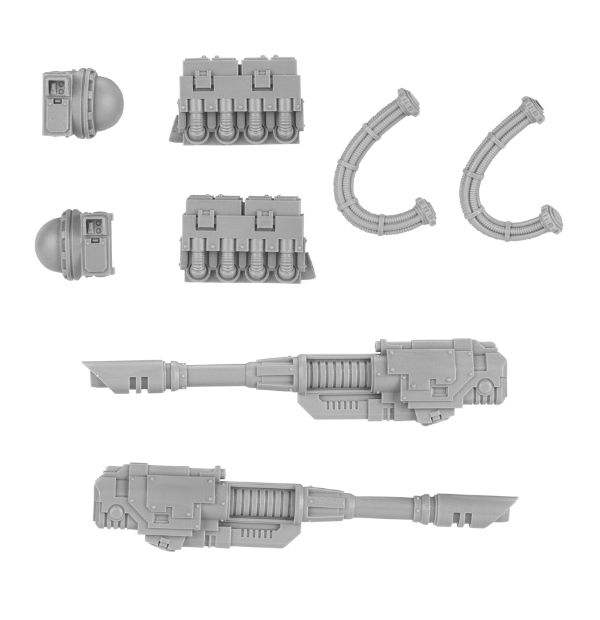 The Deredeo pattern Dreadnought, with its formidable carrying capacity and battlefield stability, was used as a test-bed for a number of advanced weapon systems. Chief amongst its anti-vehicle armaments was the Arachnus Heavy Lascannon Battery. More powerful than any pattern of Lascannon regularly fielded by the Legiones Astartes, the Arachnus could inflict more damage with each hit than standard Las-weaponry. 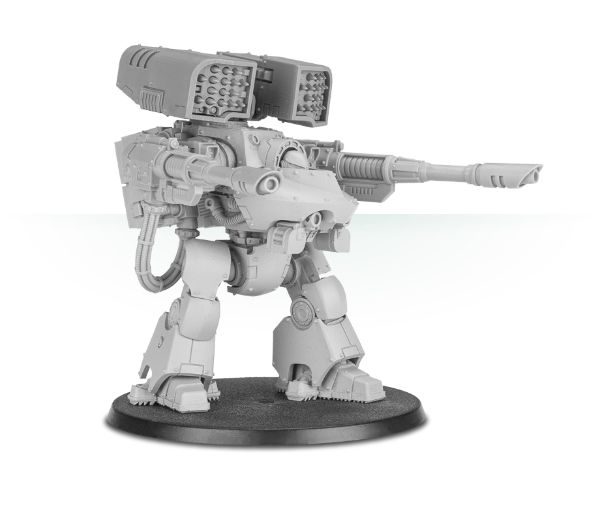 This is a multi-part resin upgrade kit for the Deredeo pattern dreadnought. 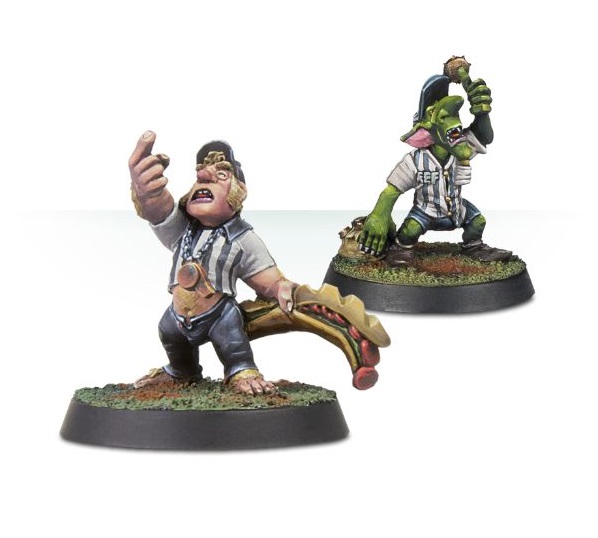 These Blood Bowl Referees are available to order until 26th January 2017. Order yours now!

A surprisingly large number of Blood Bowl referees are Goblins. They’re nimble enough to keep out of the players’ way, beady-eyed enough to spot any misbehaviour, malicious enough to enjoy calling players out and morally flexible enough to always be up for a bribe or two. Of course, it’s never a good idea to get on the wrong side of a Goblin (especially one with authority!), and players who resist being sent off usually find themselves on the wrong side of a surprisingly vicious beating – all officially sanctioned and above board, of course!

Halflings love Blood Bowl as much as anyone, but their slight stature and disinclination towards violence means they don’t make the best players. For those that want to take part, though, there’s always the Official route! Of course, the prospect of telling a nine-foot-tall troll that he’s committed a foul tends to discourage a lot of candidates, so most Halfling referees that make it through training are singularly ill-tempered and unhinged, and generally have a bone to pick with all the bigger sorts who have been pushing them around all their lives.

Now, for a limited time, you can get your own referees to oversee your games of Blood Bowl and make sure that everything is above board… or at least that the appropriate bribes are paid. These referees are wonderful collector’s pieces that can be used to help remind you that the fouling rule is in play, or to call that game changing Illegal Procedure! Additional rules for using these referees in your games can be found in the January issue of White Dwarf. 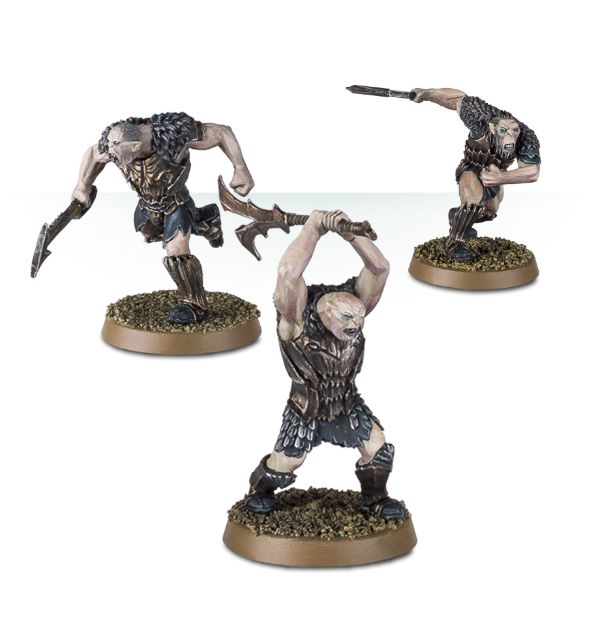 From the great fortress of Gundabad, Bolg leads his army of Orcs and foul creatures towards the Battle of the Five Armies. Sprinting ahead of this mighty throng are the fearsome Gundabad Berserkers, creatures of heaving muscle and snarling malice with a monstrous craving for flesh. It is these hulking beasts that are first to reach Ravenhill and engage Thorin Oakenshield™, Dwalin and Bilbo Baggins™ amid the ruins. The scent of battle drives these Orcs into a frenzy, making them oblivious to all but the most fatal of blows. 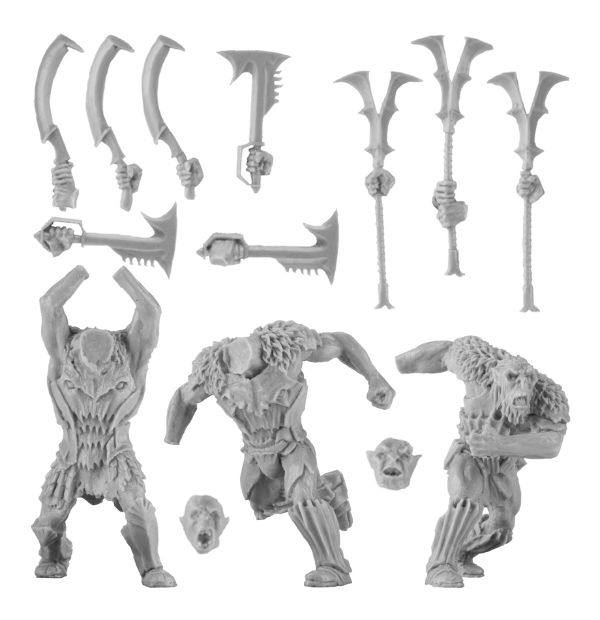 Gundabad Berserkers are an excellent elite unit for an Azog’s Legion army. The combination of their high Strength value, multiple attacks and the ability to take a variety of weapons allows them to butcher their foes with sheer brutality. On top of this, the Gundabad Berserkers are bloodthirsty killers driven into madness by the spilling of blood. Blinded by the frenzy that overtakes them, they are oblivious to the pain that is inflicted by their foes, allowing them to fight on even with debilitating injuries. This kit includes three Gundabad Berserkers and a total of nine weapon options: three swords, three axes and three two-handed picks, allowing you to equip your Berserkers with whichever combination of weapons you wish. 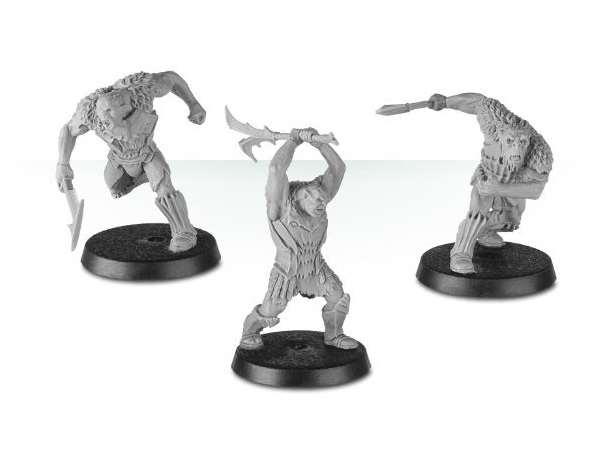 Rules for using Gundabad Berserkers can be found in The Hobbit: Motion Picture Trilogy™ There and Back Again.

This is a multi-part resin kit that includes multiple weapon options and makes three complete miniatures. Three 25mm round bases are included. 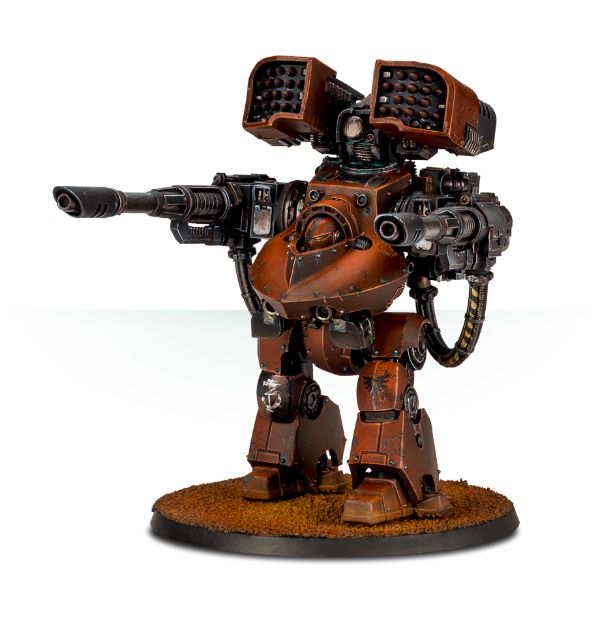 This is multi-part resin kit, it includes optional heavy bolters and heavy flamers to be mounted in the dreadnought’s body. An 80mm plastic base is also included. 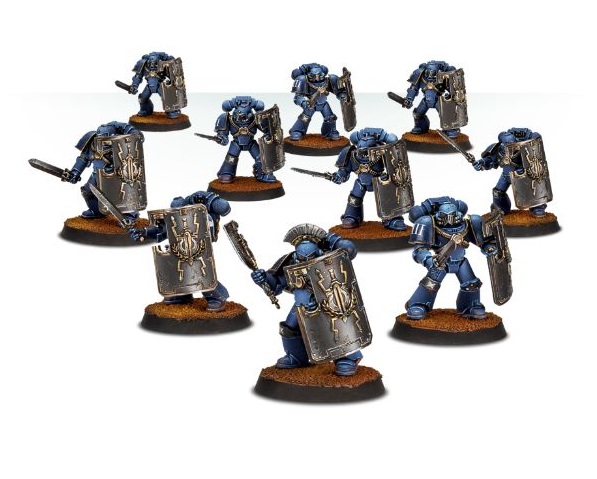