There’s something fishy about the Kuo-Toa. On the surface, they seem like just another amphibious monster, but get close and you’ll see their hidden depths.

It’s time for everyone’s favorite fishmen to get their turn in the spotlight. No, not the Sahuagin. Or the Tritons. Or Merrow. Or Locathag. Or–wow HOW many fishmen are there in D&D? At any rate, this week we’re monitoring the monitors, and putting Kuo-Toa in the spotlight.

Although maybe some things are better left unseen…

Kuo-Toa are a race of fish-like humanoids that lurk beneath the waves in the deep places of the world where they worship strange gods and enslave every non kuo-toan they come across. They are a society of religious fanatics and cruel taskmasters, working in tandem to spread their society across the ocean–and eventually the surface world.

Like the Bulette, the Kuo-Toa are another original creation for D&D–although their origins are not in a bag of plastic toys, but rather the historic town of Innsmouth, which is famous for its fishcakes, cider, and terrible secrets that sleeping lie beneath the boundless depths, dreaming of madness and the hour when the stars are right.

I think their predominant color was a greyish-green, though they had white bellies. They were mostly shiny and slippery, but the ridges of their backs were scaly. Their forms vaguely suggested the anthropoid, while their heads were the heads of fish, with prodigious bulging eyes that never closed. At the sides of their necks were palpitating gills, and their long paws were webbed. They hopped irregularly, sometimes on two legs and sometimes on four. I was somehow glad that they had no more than four limbs. Their croaking, baying voices, clearly used for articulate speech, held all the dark shades of expression which their staring faces lacked … They were the blasphemous fish-frogs of the nameless design – living and horrible.

That passage is taken from the Shadow of Innsmouth, describing perfectly both Deep Ones and kuo-toa. Right down to the worship fo Dagon. Sort of. Through much of early D&D, the kuo-toa worshipped their own deity, Blibdoolpoolp the Sea Mother, a lobster-headed goddess whose shrines litter the deeps. 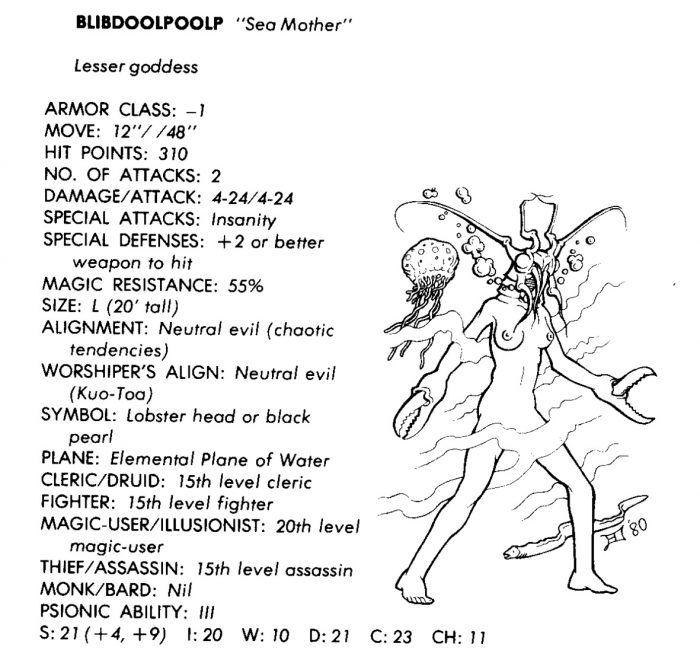 “This better not awaken anything in me.” (Alternate caption: Offerings include lemon butter and corn on the cob)

In fact, the kuo-toa’s first appearance is in module D2: The Shrine of the Kuo-Toa. This module was part of the D series, because D&D also stands for Descent and Depths. The whole adventure series set players deep beneath the world of Greyhawk, pursuing the cunning and powerful Eclavdra, a drow priestess of some renown. Players set out from beneath the halls of King Snurre and had to get past drow, trogoldytes, a lich, purple worms, svirfneblin and other horrible things. And if any of this is giving you flashbacks, then you played Against the Giants.

The first encounter PCs have is with a rogue kuo-toa who agrees to help the PCs get across a dangerous river, leading them further into kuo-toa territory. Although, interestingly enough, players didn’t have to murder-hobo their way through an entire city’s worth of kobolds to achieve their goals. They could avoid the kuo-toa, or, if they were respectful of their traditions/customs (respect is a strong word), could actually learn something from them. (Mostly that the kuo-toa hate the drow).

“Hey, see those guys over there? I helped them!”

Despite being a part of D&D from its early days, Kuo-Toa did not appear in the first edition Monster Manual. It wasn’t until the Fiend Folio came out in 1979 (featuring a number of monsters that were originally published in White Dwarf’s fiend factory column) that kuo-toa got an official entry into D&D at large. And at two and a half pages (including a reference back to D2 for more information on their culture, kuo-toa made a big splash for their debut. 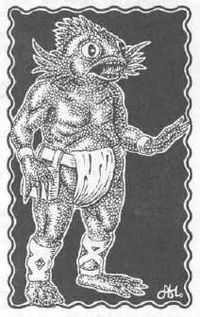 There, they were described as originally being land-dwellers who were driven beneath the sea (this was dropped in later editions) who came complete with special rules for their weapons, and the different kinds of kuo-toa that you can generally encounter. You get the appearance of monitors and whips, and the special powers that each of them gains (extra attacks, or functioning as priests).

Also of note, when two or more kuo-toan priests get together, they can join hands and create a bolt of lightning using the power of friendship.* 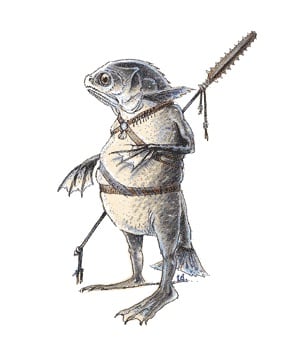 Second edition granted them immunity to poison, and and further detailed their hatred of the surface-dwellers, as well as adding in a little bit about how they just sometimes go a little insane. Other than that, they are largely unchanged in this edition, and their monstrous manual entry remains one of the longest single-creature entries in the book.

I like the slightly more alien look–for the most part, 2nd edition was an art upgrade (although not always) and they seem more like a subterranean creature. You can imagine delving into a deep cavern and finding something like this staring back up at you. Likely as not because the head is based on a real fish-head. 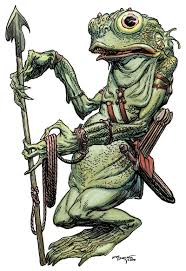 Third edition makes them much more frog-like, which, given the Deep Ones’ description as fish-frogs, is understandable. Here they are at their most Deep One-esque, including the introduction of Dagon worship. Their rules are refined to be much more like characters–owing to the edition’s philosophy that everyone should operate on the same set of rules. Monitors become monks, the pincer staff helps them grapple (instead of the weird, random arm pinning or the like that it did in earlier editions), and in general they are made a little bit more of a threat to players.

Although it does take a little more work to develop the variants of kuo-toa in this edition. Their entry gives a sample kuo-toa and a special ability list and that’s it.

Fourth edition made kuo-toa much more of a threat. In earlier editions they were low hit die monsters, in third edition they were CR 2 (before class levels) but in this edition, they were very much Paragon-tier threats, with the lowest-leveled kuo-toa coming in at 12th level, and going all the way through 16th.

Their societal leanings got some love in this edition as well, with kuo-toa gaining a number of “leader” or controller types who made their enemies suffer, while boosting the capabilities of their allies, or granting them extra actions. Although interestingly, they are moved away from worshipping Blibdoolpoolp or Dagon, and instead worship aboleths as their chosen deities.

Fifth edition sees the humble kuo-toa scaled back again, and gives them a fairly substantial makeover as a species. Here they are depicted as insane, “dwelling in madness and everlasting night.” In their history, the kuo-toa were enslaved by Mind Flayers at the height of their power, and were more than subjugated by the Illithids, they were shattered and broken by them, and when the mind flayers fell/abandoned them, they were driven completely mad and turned them over to their trademark religious fervor.

Although now, owing to their madness, their worship is not directed at an actual god–but rather the collective energy of kuo-toan belief in their insane rantings, is strong enough to cause a deity (or deity-like being) to come into existence. Of particular note: Blibdoolpoolp in this edition is presented as likely the invention of a kuo-toa who “improved on a broken human statue by adding the limbs and head of a crustacean, in sudden awe of his handiwork, he named the creation a god.”

For all that, the kuo-toa retain a number of their core characteristics. So whether you need a bunch of insane priests, or cold-blooded slavers to threaten your party, you can find them all in the Kuo-Toa.

Who would win in a fight, Blibdoolpoolp, Dagon, or an Aboleth in a hat that had secretly tricked a number of kuo-toa into worshipping it’s glorious “true” form? Let us know in the comments below!