AdamHarry takes a break from Space Hulk: Deathwing to share his first impressions!

Hey BoLS Readers, AdamHarry here and I wanted to talk about my initial thoughts about actually getting to play Space Hulk: Deathwing. And just to set the record straight I want to let you know a few things up front:

I took a couple screenshots along the way but once the bullets starting flying…well, sorry. The action got the better of me.

Okay – so with that out of the way let’s get started! 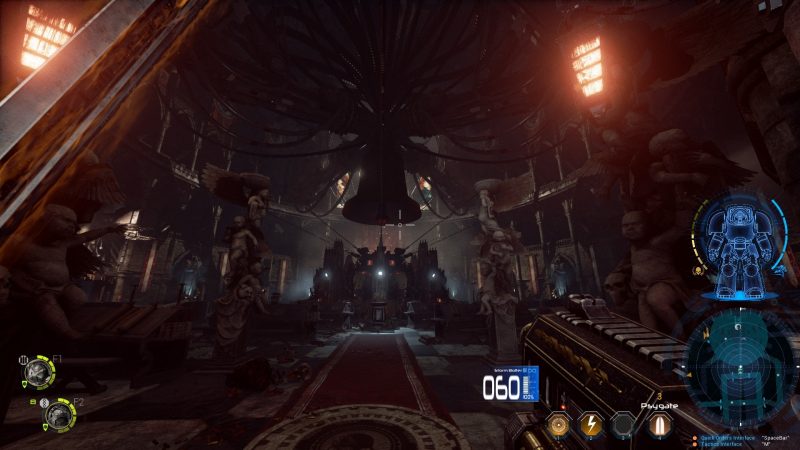 I just want to say that this game looks amazing. I’m super pleased with the visuals so far. This game nails the atmosphere and “Space Gothic” claustrophobia vibe 100%. You take the role of a Librarian of the Dark Angels chapter tasked with scouring a Space Hulk. You have a squad of 2 other Deathwing Terminators with you and you’re all pretty much walking tanks. That doesn’t mean you’re invulnerable (I let myself get killed just to see what would happen – more on that later).

As a walking tank this game really makes you feel the weight and the heft of being in Terminator Armor. You clank around and your up-down pitch is a little limited. However, you can sprint for a short distance and actually plow through targets which is kind of hilarious.

You come equipped with a Storm Bolter and a Force Sword as well as a few psychic powers at your disposal. Your Storm Bolter is pretty great, albeit a tad inaccurate if you really open up on the full auto. Your Force Sword is your go-to when things get up close and personal. With a satisfying *whack* you smite the filthy xenos and it’s a gory spray. Oh and this game is plenty gore-filled, enough to make Khorne proud. I’m pretty sure you can hear the squish sound as you step over the corpses of fallen Genestealers. 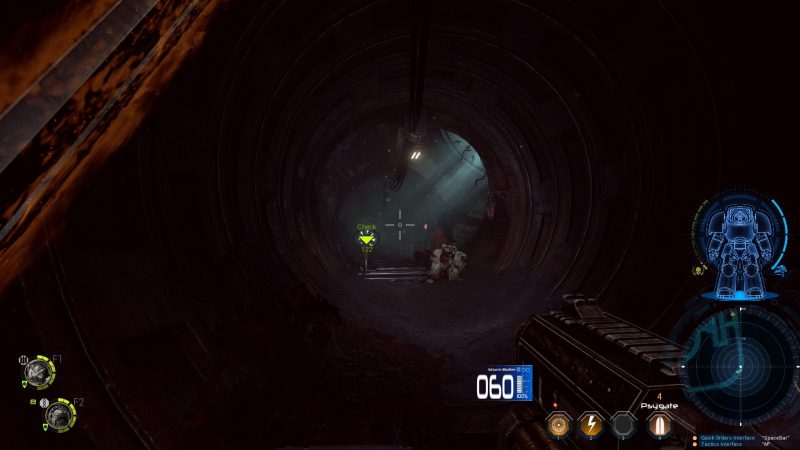 Your first mission is a simple “go find the lost squad, recover some stuff and then return to your entrance point to hold the breach.” For a first mission, it does a great job of setting the tone and the vibe of this game. I mentioned above that it feels claustrophobic and it should. You’re walking through tunnels and hallways with the occasional open set piece.

As your team plods along you hack doors and turrets and eventually you find the squad (they are dead, naturally). You return to the breach and hold down the fort for a few minutes in a very “Starship Troopers” fire fight. If this game gets one thing right it’s the dichotomy of these Elite Terminators in heavy army vs the endless hordes of disposable, yet quick Genestealers. Thankfully, you’re closer to the Terminators you read about in the lore than the tabletop version. 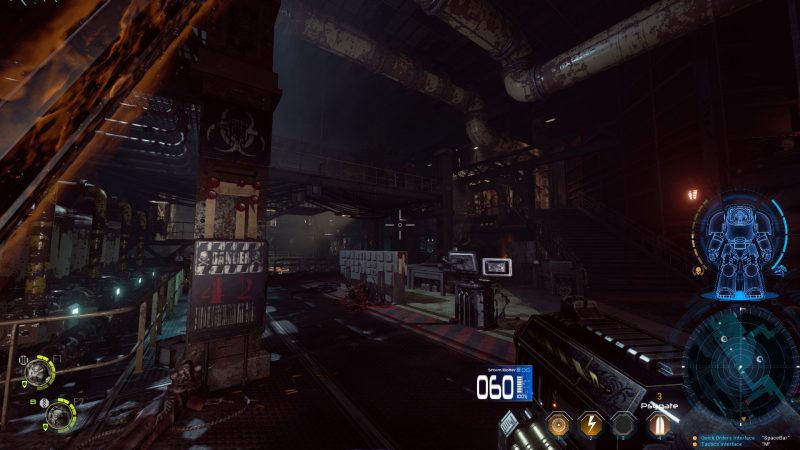 The game is more than just hallways though. As I mentioned there are some open areas and it’s another thing this game absolutely gets correct. The look and feel of the game is spot on and you can tell that they really took their time getting that right.

So far, I’m really liking this game. I did die once just to see how dying worked. Basically you get the option to reload from the last check point or you can start the mission over. I highly recommend just reloading from the check point. Starting the mission over means you have to re-watch any cinematics again. While they do look great, there is no skip button. I’m not sure if that was just something they forgot to add but c’mon folks, it’s almost 2017! You gotta have a skip button for cinematics.

I know a lot of folks were concerned about stability issues from the beta. I skipped the beta so I could go in to this game with fresh eyes. I did have a game crash, but I think that had to do with me unplugging an input(an Xbox One controller) than the game’s stability. I haven’t had any other issues thus far.

I’ll also say that the first mission felt a little slow at first. But I get it – they are trying to draw you in and build the suspense. The first map is pretty big and there are lots of places to explore and relics to find. If you just stick to the script you won’t find them all. I guess it was at some point along the “plot-path” that I kicked the right beehive and holy crap did all hell break loose. It seemed like an un-ending wave of Genestealers came out of the walls (literally at some points) to assail my squad.

Luckily, the Squad AI isn’t terrible and we managed to shoot and scoot pretty effectively. It went from “Oh let’s have a leisurely look around” to “SHOOT-AND-MOVE” pretty quick! Oh and about the Squad – I do wish they had a few more lines of dialogue. Until the Genestealers showed up they didn’t really say much. I would have been nice to have some more Voice Actors say some things about the environment. And when we did get attacked hearing the same few lines repeated was a little disappointing.

Sorry I didn’t take any screenshots of the actual fire fights. Again, I got pretty caught-up in the action and forgot I was going to need some more pictures later. But I suppose that’s a pretty good sign of the gameplay, right? 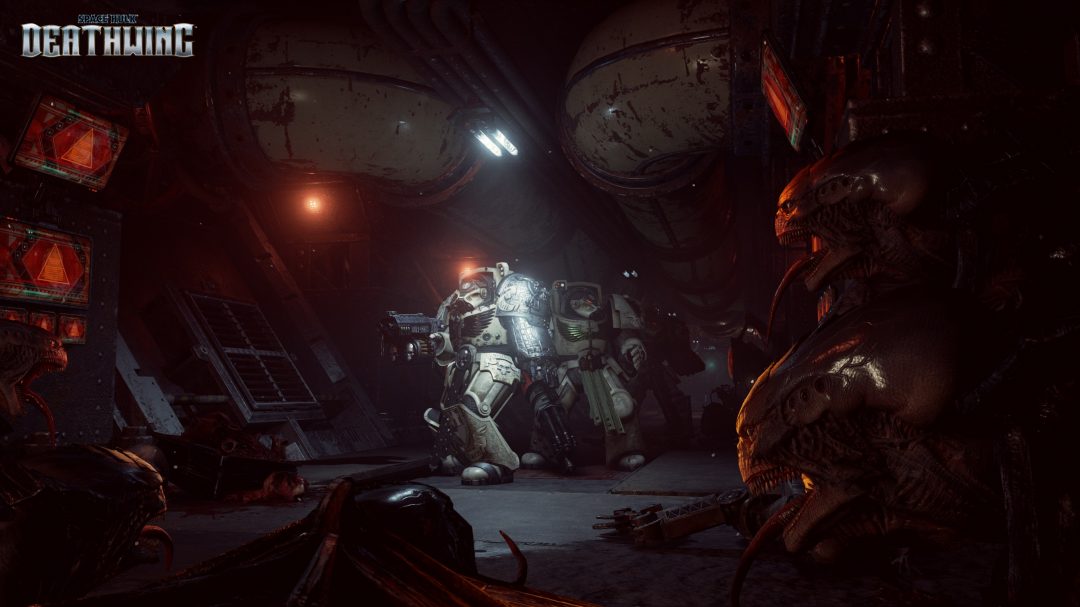 I’m actually wanting to give the Multiplayer a shot once I finish the campaign. At that point I’ll come back and right a full review. But so far, so good! I’m heading back into the Space Hulk – The Emperor Protects!

Did you pick up Space Hulk: Deathwing? what are you thoughts on the game so far?