The Tabletop Spotlight is on New Angeles – a new board game from Fantasy Flight Games!

FFG is back with a brand new board game set in the Android Netrunner universe and our friends at Dragon’s Lair Comics & Fantasy were kind enough to bring over a copy for us to dig through:

I’m a big fan of Netrunner, FFG’s fantastic asymmetrical LCG. We’ve done an Unboxing of that core set before* and the game has been going strong for a long time now. But we’re not here to look at Netrunner (although, we probably need to start again…) we are here to check out New Angeles!

So what the heck is it? Well, it’s a new board game for 4-6 players where each person takes on the role of a Megacorp trying to make piles of money while keeping the occupants of the city from revolting. Each player’s primary goal is to increase profits – plain and simple. You need to earn more capital than the other Megacorps to win. However, if you only focus on your own bottom line, the city around you will go into revolt, the Government will get involved and that’s just bad for business.

Basically – run a good business, out preform your corporate rivals and keep the people happy! Sounds simple right? Well, here’s the rub: Everyone is out to do the same thing! This game has a really slick “co-opetition” vibe to it. You have to co-operate with your rivals to get things done, but ultimately you want them to fail – and they want you to fail also! Bring on the frienemies!

It’s got a neat Offer/Counter-Offer system and the way the “threats” move around is pretty cool too. You really have to work together to keep the peace but you also have to conspire to keep folks in check. Along with the ultimate goal of just earning more than your peers, the game also has “Rival” cards. These secret cards will tell you which corporation you’re aiming for. Each player will get one and these “secret” agendas are one more level to the game. On top of that, one of the cards actually wants the Feds to come in, so you’re not just scheming against against a Megacorp, you’re trying to encourage the city to go to the pits, too!

I haven’t even gotten into how the threats to the city work – but that’s just one more thing folks are going to have to keep track of. I also haven’t mentioned how great all the component quality is – This is an FFG game so you can expect that it’s all top-notch stuff (and lots of tokens & cards).

Overall, I am genuinely excited about this game. I’m putting this on my Holiday Gift List, but not just for my sake – but for my gaming group’s sake! Again, it does require a slightly higher number of players than most board games to get started (4) and it supports up to 6 players. It also runs a little longer than a lot of the board games I’ve seen (it runs in the 2-4 hour range). However, if you’re lucky enough like I am to have a good group of dedicated board gamers and the time to play this game you will be rewarded with a really fun experience. It’s in stores now so go pick it up! 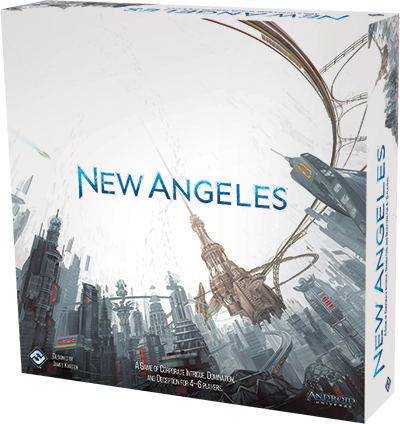 New Angeles is a board game of corporate greed and machinations for four to six players set in the Android universe. You and your friends each gain control of one of the worlds’ most powerful megacorporations. Then you use your wealth and influence to create more wealth and more influence. Make piles of money, outperform the competition, and you’ll be a winner.

To do this, you’ll cut deals and forge temporary alliances. You’ll leverage your credits and maneuver for valuable assets. All the while, you’ll also need to keep an eye toward the masses, striking deals with the other corps as necessary in order to keep a lid on crime, disease, and unrest. If you want to maximize your profit, after all, you need to keep New Angeles open for business!

If you’re a Megacorp, Greed is Good!