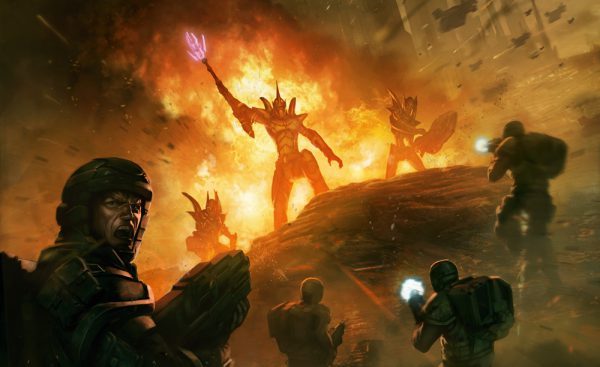 Deadzone Second Edition has been welcomed by players across the globe. The Deadzone Rules Committee is working on making it even better, and they need feedback from playtesters!

When the Warpath Kickstarter unlocked the GCPS Marines sprues, we couldn’t wait to develop the faction for Deadzone. Since the first wave of Warpath shipping will include these models, now seems like the perfect time to release the beta rules for the GCPS Marines in Deadzone.

It’s a Sentient’s Life in the GCPS Marines!

The list is meant to represent any one of a number of armed forces within the GCPS, from a Corporation’s standing security force caught in a Deadzone, a mercenary company of “force application specialists” sent in to retrieve sensitive assets from inside the Containment Protocol, or a pacification force employed to try and contain a situation before the Council of Seven catches wind of what’s going on.

The playtest will run in two waves: this initial release, in which we will ask you to put the list through its paces. Please try your hardest to make terrible, broken, over-powered lists with it; we need to know if there are any combinations of units or items that would make the game un-fun for someone on the other side of the table.

After a week we’ll incorporate any needed changes, then put the second list out for another wave of consultation. Below are some insights into the design behind the list and the questions we would like you to focus your feedback on: With this list, we wanted to create a force that evokes the feeling of modern armed forces, especially as depicted in techno-thrillers of the Tom Clancy/Andy McNab sort. What the GCPS lacks in terms of assault ability, they more than make up for in having the right tools for any combat scenario: Whether you need the mobile precision offered by the Accutek LR-45 DMR (Designated Marksman’s Rifle) or simply need to blow up every alien in the room with the crew-served Missile Launcher, the GCPS have you covered.

Currently, your choice of leaders will be between the Corporation Major-General or the Corporation Sergeant.
The Major-General gives you access to the Drone Strike Army Special, calling in air support from HQ when needed. This is currently set at Indirect (2) – at the moment we want this ability to be more about moving enemy models, and we’re worried that setting it at Indirect (3) will result in players desperately re-rolling their command dice to get 5 free mortar shots a turn.

The Corporation Sergeant brings back a mechanic a lot of players have asked for: Overwatch. This rule is meant to give the basic Trooper an option to respond to melee attacks, granting a Shoot action with a Rapid Fire weapon in exchange for a Command dice.

Most of these are self-explanatory, although there are a few we would like specific feedback on.

Two new items are introduced with this list: Commlinks and Tripmines.Commlinks are intended to let models act as spotters for Indirect or Grenade weapons, letting a player mark a cube and eliminate the risk of the attack scattering off-target, but not to let you target an otherwise invalid target.

Tripmines came about out of a desire to open up more options for Engineers, and to give players an incentive to train a model as an Engineer in campaign play. Leveraging the ‘packed/deployed’ rules for Sentry Guns, Tripmines as written assume that there will be a model to represent them, although they should work using a counter instead. At the same time the rule doesn’t currently give strike teams without an Engineer an option for dealing with them aside from throwing a model at it who will hopefully survive the blast (or is disposable enough that it doesn’t matter if they survive or not). I’m worried that if Tripmines can be shot then they become little more than an annoyance, and not worth taking.

Give the rules a shot then let Warlord know what you think on the Deadzone Fanatics Facebook Group, the Mantic Forum, and by emailing the rules committee.