ChahDresh explores the limits of math in understanding what makes something good.

Every card I reference can be found on Yet Another Squad Builder. If I lapse into jargon and use terms you don’t recognize, let me know in the comments below.

In my last column I wrote on how math can help us understand the game and make more informed decisions. Math, of course, is not the only tool at our disposal. In fact, sometimes we have to do the reverse, and understand the practical factors that make mathematically favorable cards hard to field. 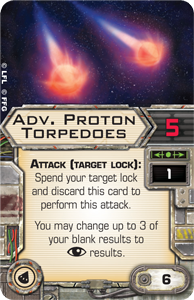 Much like Expose, Advanced Proton Torpedoes is a card that rarely comes up in conversation. When it does, there’s usually a sense that the author is reaching or trying to be overly cute. If we just look at the card’s damage potential, this doesn’t make that much sense:

When fired with a focus token, an APT will result in:

That’s the issue: The non-mathematical factors that keep you from getting off your APT shot are what keep the card off of tables. A few of these will sound familiar, because they can apply to other situations as well:

That’s limiting enough, but let’s be more specific. It’s a range one torpedo attack, which means…

2) Only ships that can equip torpedoes can carry it

This is a big difference from, say, Proton Rockets. PRockets are also a range 1 shot, but the ships that can carry missiles are very different from the ones that can carry torpedoes. The TIE Bomber, X-Wing, Y-Wing, B-Wing, and Firespray are not renowned for their ability to control range. Most of them have limited dials, limited repositioning, or both. (The E-Wing is more capable but has problems of its own, starting with its prohibitive cost.) This is compounded by the fact that your opponent knows which ship has the APT, and will accordingly try not to give you that shot, whether that’s by dodging your arc or blocking you with his chaff. This combination doesn’t just make it hard to get into the right range, it makes it hard to get in the right range when you also have all of the actions set up. Which brings us to the fact that…

The oh-so-important caveat that goes along with the chart, above, is the focus token. You have to have the focus token at the same time you launch the torpedo or it’s not an accurate attack at all. The trouble is that the ships that have torpedo slots generally struggle with their action economy. Their dials generally aren’t good enough to support Push the Limit (another difference from PRockets), which limits you to basically two options.

Don’t you wish your dials were good enough for me?

Option one is to get your lock and your focus token on separate turns– potentially wasteful, since you’re losing action economy on one turn in the hopes of earning it back on a future turn. (Long Range Scanners might help, but that limits the ships we’re talking about even more.) Alternatively, you could have another ship help you out (like Esege Tuketu or Dutch Vander)– but that makes this whole proposition even less efficient. Which brings us to…

Now another kind of math is asserting itself. The APT costs six points– halfway to a whole ‘nother Z-95 or TIE Fighter. Of course, that’s just the cost of the torp itself– it doesn’t count the points that you expend trying to set the shot up. Say you want to solve the action economy problem on a B-Wing with an EPT slot. You could go Deadeye, B1/E2, Recon Specialist. Hooray– you’ve addressed the action economy and timing window problems without relying on another ship for help. But now you’ve spent *eleven* points trying to set up your one moment of glory, not to mention whatever extra points you spent on the ship beyond what you would have. (Going from a Blue Squadron Pilot to the cheapest EPT pilot, Nera Dantels, is another four points.)

There’s another aspect to this inefficiency. As with Expose, we can make the APT workable by adding in dedicated support ships, but that makes the whole combo that much easier to deal with. A good ion, stress, or block effect (or just skilled arc-dodging) can shut down the heavy hitter and its support ship– a tremendous economy gain for your opponent. 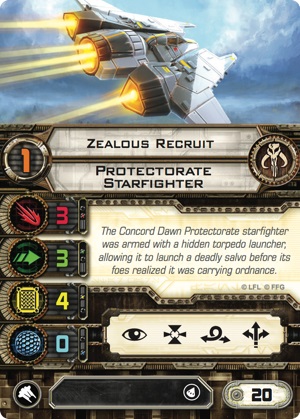 The Protectorate Fighter is the first ship that seems like it could make practical use of the Advanced Proton Torpedo– four full years after the card was introduced. It’s not because the mathematics of the actual attack are bad; they’re terrific. It’s because actually getting the torp out of the tube is so darn hard– and if your ship dies before you get the torp out of the tube, you eat all those points.

None of this, I expect, is controversial. It’s widely known that Expose and APT are bad cards; that’s why they’re so seldom seen. The point of the exercise is to think about why the card is bad, so to help us know how to evaluate cards more broadly. We have to think about the mathematical power of the cards as well as practical, ship-flying factors; dismissing either of those things leads to mistakes.

~Next time we’ll put it all together by attempting to answer a specific question: just how good is Push the Limit?

ChahDresh is an amateur writer and even more amateurish X-Wing player. If you think you know what’s coming next, let him know below.