Come get the latest on what GW and Specialist Games is working on.

Only asked about availability, Tony Cottrel thinks it is on for the Heresy Weekender, the book is at the printers at all being well the boats packed with black books should arrive back in the UK in time for the first week in Feb and the Horus Heresy Weekender. 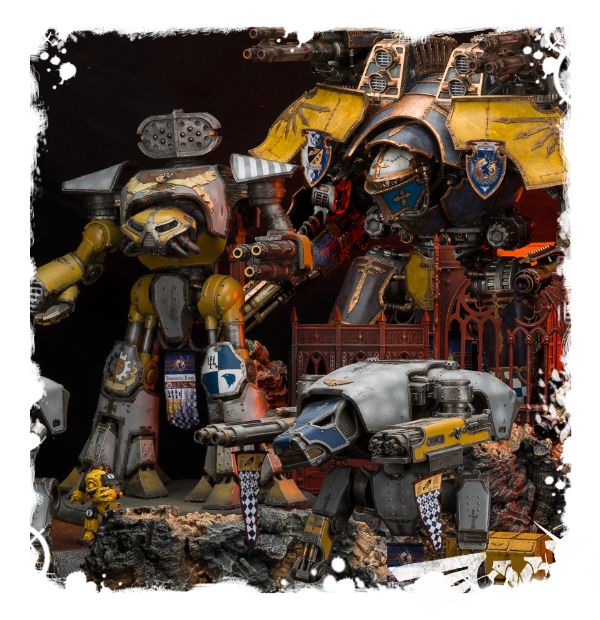 Release has been put back. Mix of reasons including GW releasing this may be a very popular choice (really? Who would have thought?). Gives them more time to work on things and allow a bigger initial release with more models etc.

So far the Warlord, Reaver and Questoris Knights have been 3D modelled for the new game. Warhound is currenty being worked on.

A game is expected to be around five titans of any class. You pick a type of Maniple, such as Scout, Assault or Battle and pick accordingly. This means you could have a game of five Warlords v five Warhounds. You then take the difference in the two sides and the weaker side then gets to spend those points on other things, I can’t remember the name now of them – Stratagems? Something like that.

About nine titans a side is about the limit you would reasonably want, unless you have the time spare.

The emphasis of the game is controlling you titans and making decisions such as power levels, ramping up your generator makes you faster, more powerful weapons and shields but has consequences. Your titan has a personality and may not like what you try and do with it. Basically as you get in the novels the Princeps has to keep control over something which may not want to relinquish control. So if you have a bloodthirsty, hunter type titan trying to back away from a fight might not be the easiest thing to do.

Terrain has been done as have Realm of Battle boards which the buildings can fit onto. These are at the factory already so should be ready to go when the game is released.

There is no great desire to redo Epic. While we may get more games at the same scale – such as a massed tank version there is no desire to see a combined titan/tank/infantry battle. Basically they don’t just want 40k at a smaller scale.

There is a chance, though it may be small, we see some of the models at the Heresy Weekender in a month’s time.

Plastic Ogre player will be out soon. There will also be a plastic Troll. They decided to do these in plastic as they can be taken in so many team.

Elf Union team is being worked on, Nurgle will follow after these hopefully later this year (October?). Also Goblin team in plastic, I think from memory these will come before the Elves. Goblins were a must for plastic as they can be taken on their own as well as being taken as members of other teams.

Expect at least one Star Player to follow with each team, some may get two. The Skaven star player (two heads, four arm guy) will be here soon. Season Two will have a lot of Star Players in there, some known and some who are new.

Neoprene pitches are a go. The human and Orc pitches have been done as the first ones have arrived at GW to look at and test out. Forgot to ask when these are likely to be out.

I think everyone is waiting for the Prospero Book. Nice timing as now with Burnong of Prosero out, there will be plenty of easily accessable minis to go with it for the Space Wolves and Thousand Sons.

Very interesting to hear that GW does not want to remake EPIC as they view it as being competitive with 40K – so titans only, or maybe some select vehicles later on. I consider that a good call as last time around EPIC DID become an alternative to playing 40K for a segment of the customerbase.

On Blood Bowl, the teams keep rolling on, but I have yet to see one that specifically linked to any discontinued races from WFB.