Curse of the Crimson Throne is a classic Adventure Path put out by Paizo back before Pathfinder was Pathfinder. It was innovative with its sweeping narrative of dying kings, plagued cities, crime lords, barbarian guardians, corrupt queens, and dark ascensions. It introduced adventurers to Korvosa, a kingdom that had long suffered under the Curse of the Crimson Throne–so called because not a single ruler has ever died of old age or left an heir.

And now Paizo has collected the six (six!) disparate volumes into one gorgeous new hardcover book. What’s more, they’ve updated and revised it so that now it uses Pathfinder’s rules in their entirety, including new stats for monsters, new maps, and even new adventure content. In honor of its release–and the accompanying audio adventures we’re reviewing the adventure path for you. 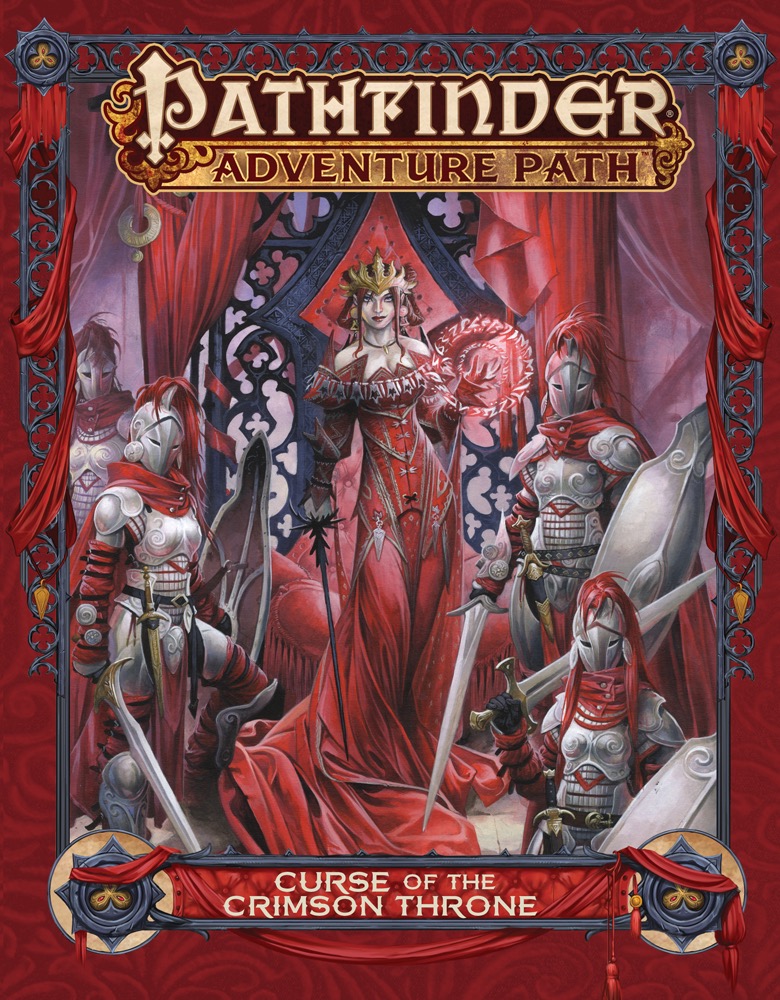 This adventure was first published back in 2008–a full year before Pathfinder was to be officially released. I remember the heady days of the open playtest when 3.5 was coming to an end and both Pathfinder and 4th Edition were on the horizon. Flipping through this adventure path is a little like stepping back in the development cycle a little. You can see some of the ideas that were being developed (both for Pathfinder and for 4th Edition) present in the adventure path–combat feels more action-oriented and dynamic, there are things akin to skill challenges. But how do all those ideas hold up?

Quite well, actually. Let’s dig in.

Curse of the Crimson Throne is considered a classic for a reason. It is definitely worthy of all the hype around it right now–it presents a rich narrative that the PCs can get swept up in. This one stands out a little from the other adventures that are out there–partly I think because of the character of its narrative. This adventure path feels very pulpy. It begins with the PCs tracking down a crime lord, Gaedren Lamm, who makes his lair in an old fishery in the city of Korvosa. 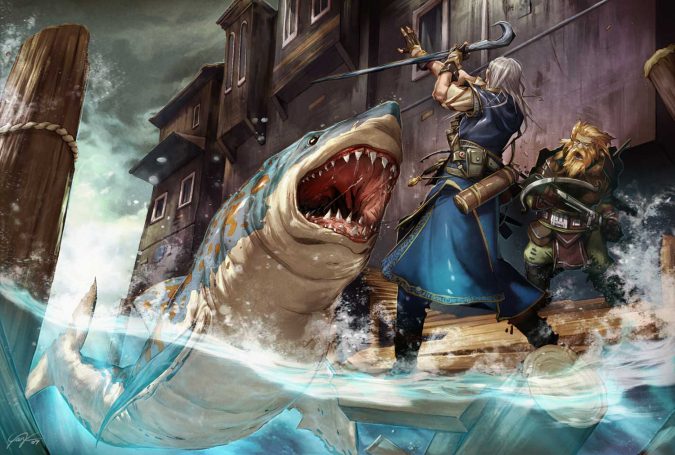 There’s something fishy about this adventure…

From there, the players are swept up in the events that wrack the city of Korvosa as its king dies and a queen ascends the throne. I really dig the structure of the events in this adventure path. They make the world feel like a living place–like things are happening independently of the PCs. It’s very immersive, and when I first played through it, it had a way of drawing you in to a world that seemed to be waiting for you. The PCs are given a chance to get to know the city during their hunt for Lamm–and just to get sidetracked for a moment, I feel it’s worth pointing out that he is everything you’d hope for in a crime lord. He’s vile, commands a gang of thugs, a hungry shark, even a gaggle of orphans (whom the PCs can befriend to great effect).

The whole adventure feels just as detailed. It unfolds in a way that I hadn’t really experienced in a published adventure before. There are proto-skill challenges as the PCs try and navigate the events unfolding in a city gone mad. There are noncombat encounters galore–the entire second part of chapter one doesn’t really have any fighting, just a lot of persuading and characterization of a City Gone Mad. The third part features a store called All the World’s Meat. 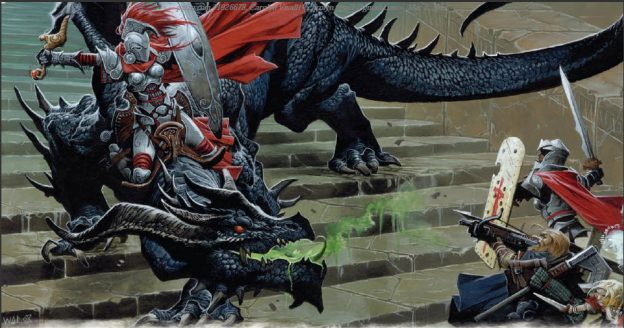 If there’s one thing this adventure path does right, it’s personality. Instead of just having dungeon after dungeon, the game presents a cast of characters that all feel like they’re real enough to have their own wants and needs and goals. This is a testament to the adventure’s writing. It balances the seriousness of the events that unfold–the death of the king, the ascension of the queen, etc. with moments of humor, like tracking down an insane painter, and having to “win” an audience by challenging the Emperor of Old Korvosa (who is a lot like an Emperor Norton gone evil) to a rousing game of Blood Pig!

Playing through the adventure feels a lot like (binge) watching a good serialized TV show. There are main story episodes, but the adventure path isn’t afraid to wander off into side-paths. It handles the side-quests deftly, using them to expand the feel of the world, or to make the adventurers more invested in the things to come. After all, the big premise here is that Korvosa is being threatened by the unrest that follows after the Curse of the Crimson Throne strikes, and the only way that works is if the PCs care about the people or places in the city. Sprinkled in throughout the adventure are little narrative/roleplaying “cutscenes” like the first appearance of a masked vigilante hero, Blackjack, who appears just in the nick of time to interrupt an execution. 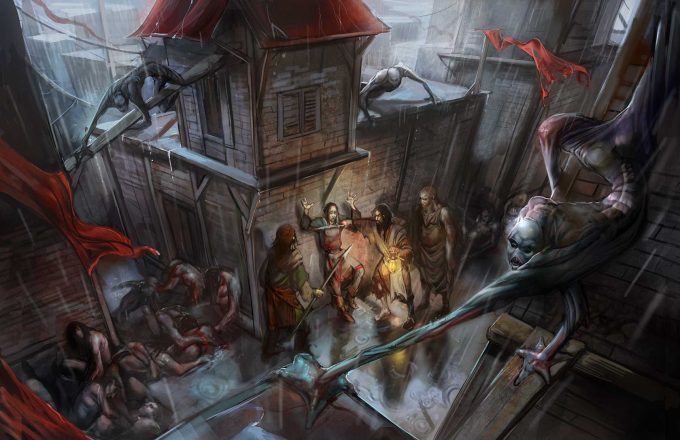 Just not *this* execution…

And that brings up another thing that Curse of the Crimson Throne manages. By creating characters that the PCs care about, you can have story rewards. And I don’t just mean the XP you get for completing certain story events (though this is present as well), no, I mean that as the adventure unfolds, it takes into account player actions, and presents options for ways the story can develop based on what the players are doing.

I really like this. It gives a narrative incentive to get players moving along the adventure, and, as mentioned, that in-world incentive goes a long way towards making this adventure path engaging. But, it doesn’t take itself too seriously as to be “all about our story.” It allows the players room to be adventurers, and all that entails. There are plenty of places for your players to shine–and there’s lots of ways for them to get more entangled in the world that Curse of the Crimson Throne sets up. Your players can get rich, or don the mantle of Blackjack, and chase down Urgathoan cultists… there’s something for everyone in this adventure path. It really captures the heart of Pathfinder.

If that doesn’t convince you, I don’t know what will.

I could spend all day talking about how great the adventure is (very), or how well it holds up (extremely), or how it has a lot of modern RPG design elements to its structure, but was one of the first big adventure paths to do so–and that it helped sow the seeds of rich narrative depth in future adventure paths, but that doesn’t cover all the new stuff in the book. 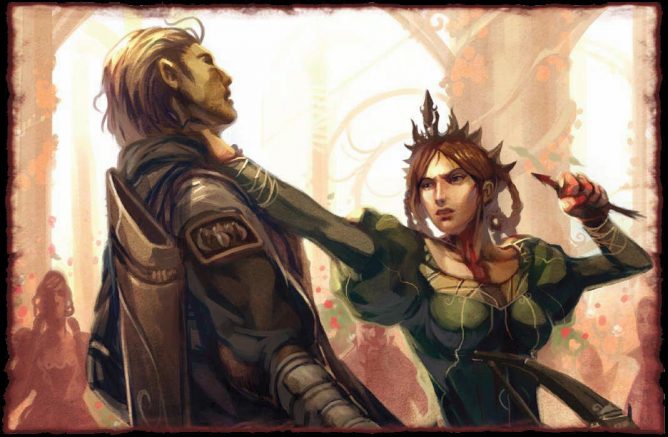 As I mentioned, it’s gorgeous. You can see some of the new art on display here. And they’ve updated the maps as well. The entire book is easy to use–even if you’re not playing through the adventure path, the book makes it very easy to drop existing encounters in to your own game. I think one of the high points of the book is how much stuff there is that is fun even without the context of the ongoing story.

But it’s not just updated stats–though they are quite nice (you only need the adventure path to play the adventure, there are stats for literally everything in the book that needs them). There’s an entire new side adventure in the form of a dungeon run by the Grey Maidens, as well as a bunch of new player options, including spells and magic items. While it doesn’t add as much as, say, an adventure like the Princes of the Apocalypse did–it adds at least as much new content as Storm King’s Thunder.

Also gathered here are a number of appendices which expand on the background information presented about the city of Korvosa and the 12 most important NPCs. Their backstories, motivations, and actions over the course of the adventure are all presented in one place.

So whether you’re looking to run a new campaign, or for something that you can use to spice up your ongoing game, it is definitely worth picking up the new Curse of the Crimson Throne, available now at your local game store. And be sure and stay tuned next week, when we take you through some of the best moments from this adventure!

Author: J.R. Zambrano
Bell of Lost Souls Staff Writer and DM, J.R. covers RPGs of all stripes and on occasion eats sandwiches. You can ask him about either at [email protected]
Advertisement
Paizo Pathfinder Review RPGs
Advertisement