High-powered play. Now there’s a concept that might send many a GM running for the hills–understandably so. After all, once your PCs can start handling Balors (plural) how do you keep them feeling challenged? What do you do when your group decides that they’re tired of chasing down orcs and goblins and want to try their hand at shaking the foundations of the world? Well, here’s a look at five different systems that were meant to handle high-powered characters. 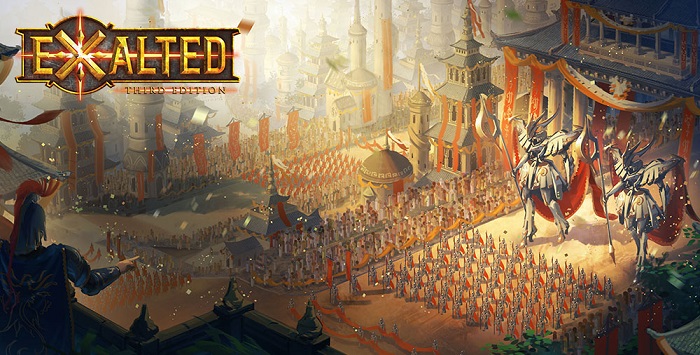 Let’s hit the ground running–actually let’s hit the ground, punch our way through it to the imprisoned demons below, punch them, and then start running. Exalted is a game of epic, high-fantasy. Drawing from disparate sources like anime, video games, and the epic of Gilgamesh (no joke), characters are demigods of one stripe or another, and often wield massive weapons made out of magical materials like Jade, Moonsilver, or Orichalcum. The “vanilla” game details the Solar Exalted, the most powerful of the Exalted–themselves the chosen champions of the gods of the world.

As characters progress through the game, they gain powerful abilities (called Charms) that let them shoot energy from swords, fire arrows with unerring accuracy, punch through or jump over mountains, all of which have names as colorful as the abilities they unleash. Over the course of a game you might fight your way through an army, confront (and punch out) a T. Rex, weave sorcery that reshapes the foundations of the world (at the highest level, spells do things like isolate a region from reality, or cause a character to be the enemy of the world–including plants and animals), defeat gods, demons, and all manner of ancient magically powered robots.

The system is not without its problems, though. Like many games that allow for high-level play, Exalted can be slow at times. There are Charms that let your character attack multiple times, Charms that let you defend and counterattack against attacks (sometimes multiple times) and if you’re doing it right, you’ll be rolling two fistfuls of dice each time you do anything. A single turn of combat can get completely out of hand–but, if you’re willing to roll with it (sorry), the game can be a ton of fun. After all, some days you just want to punch a deity until they cry.

Much like Exalted, Anima, Beyond Fantasy is a high-powered high-fantasy setting with heavy amounts of anime, manga, and anime influence. Created by Edge Entertainment based out of Spain (for a while, you couldn’t get many of the books in English, except as fan translations through google docs), Anima is a game set in a broken world with an epic history to it. Split into three parts by ancient machinery–because Anima is secretly in the far future of our world, and you can find monsters and other enemies that wield cybernetics and magic spells alike–the world of Gaia is plagued by monsters, gods, and demons.

Characters are heroes that might be comparable to 5th-level D&D characters, but over the game’s basic 10 level structure, they grow exponentially in power, gaining powerful abilities in a variety of flavors. You might be a ki-wielding martial artist who can slice through magic spells, fly through the air, and move faster than the eye can follow. Or perhaps you’re a powerful mage, who commands mighty spells (there are 100 “levels” of spells, that range from creating a shield to raising literally all of the dead and creating them into an army that you command) and brings the forces of nature crashing down on your enemies.* 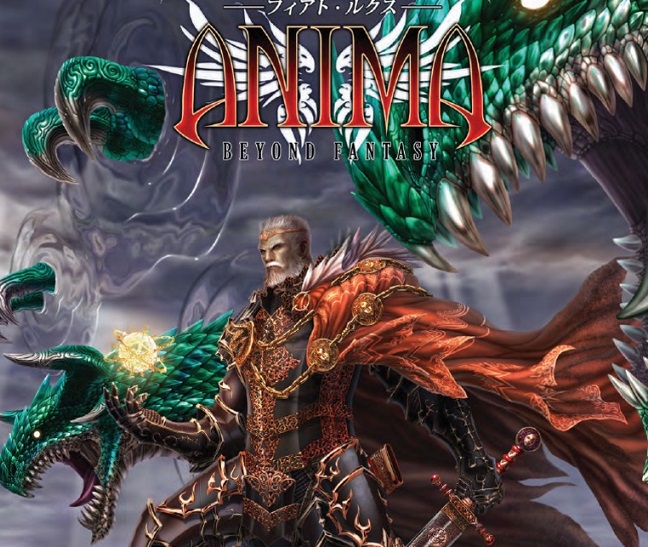 Dragons are a force of nature too.

The high-powered nature of the characters is reflected in the mechanics themselves. There are rules for high level interactions–characters can gain the ability to get inhuman, impossiible, and Zen (the highest) results, which allow them to break the game-imposed maximums on the results you can roll. At certain skill levels, characters are assumed to be decimating the environment as a matter of course. When two high-powered (for Anima) characters clash, weaker characters should flee, or suffer injury themselves.

What I like about this system is that there’s something for just about any flavor of power you might want. Whether it’s magic, ki, crazy special weapons, summoning–whcih can be in the vein of good old summoned monsters, or can take on a more Final Fantasy-esque feeling–you can pretty much find it. But…this again has its own problems. The game is complicated–not so much so as to be unplayable, but it’s a lot more work to figure out what kind of character you’re going to build.

Godbound is “a game of divine heroes in a broken world.” You play as champions who have learned one of the sacred words of the world–effectively wresting divine power from the hands of an absent or fallen (some say broken) heaven. I love this system, and this setting. It feels like the sort of world that needs divine heroes–and it’s up to the player characters to provide them. Without their intervention, the world will fall.

And what a world it is–complete with a khanate full of corrupt monks, mecha-soviets, a bureaucracy bound empire and pockets of reality/heaven that are broken by strange machines. Characters advance by learning divine Words and acquiring Gifts, which are powers that let you do things like:

It is reality-bending, and it is a ton of fun. Also worth noting, the game truly does treat you like a demigod on the cusp of divinity. As you level up, you also advance in terms of a following. You gain your own faction of worshippers whom you can bestow a fraction of your powers upon to go out and do good works in your name. If you ever played ActRaiser, it’s a little like that. But somehow more cool.

What’s more, you can download the free edition RIGHT NOW. What are you waiting for? Do it! 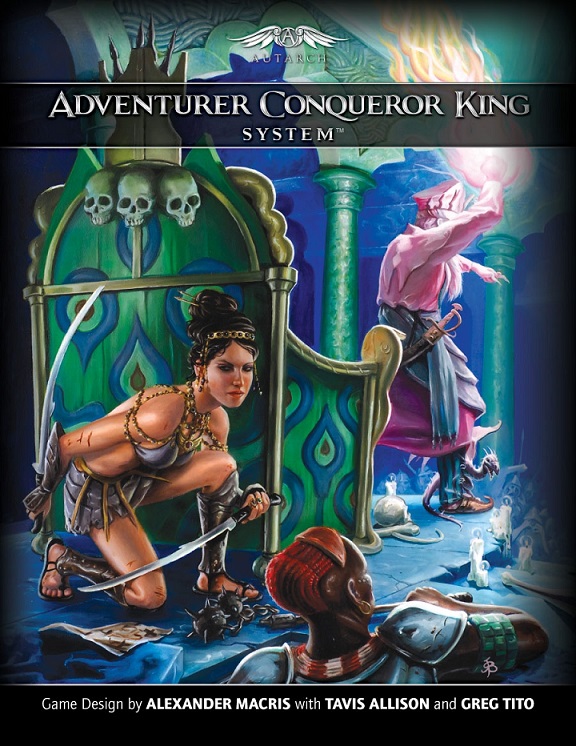 But maybe you don’t necessarily want to play a god. Maybe what you want is to play a lowly adventurer, who, like a certain Cimmerian travels the world, acquires treasures, even a kingdom (only to lose it and have to reconquer it). If so, then you should give the Adventurer Conqueror King System (ACKS) a try. Drawing on old-school design but with modern sensibilities, ACKS is a fantastic way to revisit some of the ideas that have dropped off a little in recent edition. Things like building a castle, or a wizard’s tower and ruling over the surrounding land are handled deftly in this system.

It was built from the ground up to scale from your first swing at a wandering monster to the day you sit atop the throne of a hard-won kingdom, brooding as you are prone to great joys and great melancholies. It reimagines some of the classes–Dwarves and Elves have race-specific classes that really capture that early D&D feel. ACKS is a game of possibilities, and it knows it. It’s built right into the way it presents the world. 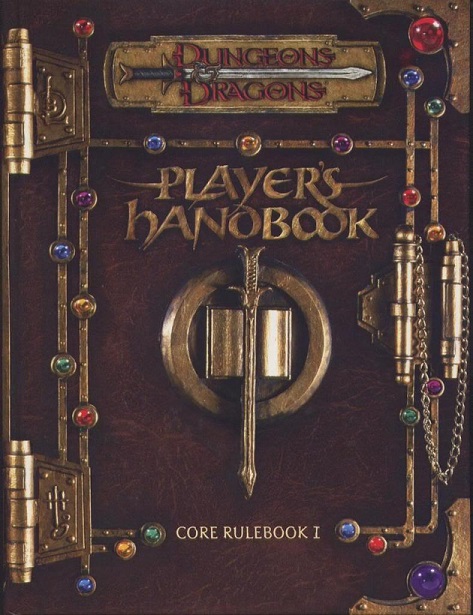 But wait! Before you rush off to the comments to tell me how wrong I am–I am specifically referring to 3rd Edition D&D. Wait! No stay with me–not the kind that needed the potentially broken Epic Level Handbook. I mean the core set of D&D 3rd edition.

Don’t believe me? If you’ve ever played a character past 5th level (in 3rd edition, and, arguably, in the other editions as well), you’ve played high-powered D&D. As Justin Alexander over at The Alexandrian puts it, it’s all a matter of calibrating your expectations. He says it better than I could:

Before we [demonstrate how effective D&D is at modeling the real world is], though, I want to make one disclaimer perfectly clear: D&D is a game. Its systems are abstracted and streamlined in order to keep things simple and, more importantly, fun. So, yes, there are compromises. (You’ll see a graphic example of the types of compromises which are made when we talk about the Jump skill.) The game is not a physics text. Nor is it without flaw.

It’s just really, really good. And part of what makes it really, really good is the fact that it does this simulation casually. It doesn’t make you do the math. It’s worked the math into the system. All you’ve got to do is roll the dice and handle some basic arithmetic.

What he posits is that if you look at the DCs listed for standard and difficult tasks, and compare them to our world, D&D does a fairly good job of modeling the real world–as long as you understand that the people who live in it are, by and large, average–and that they tend to cap out at around 5th level. He puts together a few examples of things like breaking down a simple wooden door (like the interior door of a house) which is DC 13. The average character should succeed about 40% of the time, or about two kicks, which jives pretty well with reality. 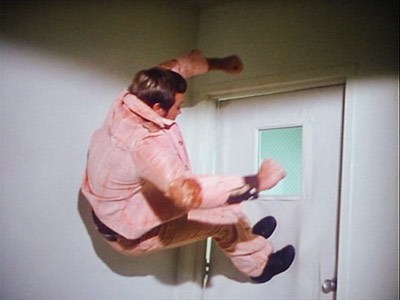 Kicking in doors is also the only way I know how to open them.

Or he takes a look at how Einstein might be represented in D&D:

At 5th level an exceptional specialist like Einstein will have:

In the case of our 5th level Einstein, that gives him a +15 bonus to Knowledge (physics) checks. He can casually answer physics-related questions (by taking 10) with a DC of 25. Such questions, according to the PHB description of the Knowledge skill, are among the hardest physics questions known to man. He’ll know the answers to the very hardest questions (DC 30) about 75% of the time.

He goes on to illustrate how you can get a competent blacksmith out of a first level character who tries to specialize in that–you should really read the  article. It’s fascinating stuff. The gist of it is, though, that once you get past 5th level with any character, you’re crossing the threshold of talented prodigy and into the realm of the superhuman. By the time you get to 10th level, you’re basically already a demigod–you’re capable of hewing through the toughest creatures, of taking blows that would fell even paragon specimens of mortals.

It all comes down to how you look at it, and how you model the world. Eberron did something like this–the highest level creature in the game is an Awakened Tree Druid that’s 20th level, but the next one after is considerably lower. It’s a world of low-level characters soon to be set upon by characters who rapidly become more than human. And it works. I used this article to calibrate the feeling of the world in the campaign I run–my party is 13th level now, and they are some of the most important people in the region. They are the ones that kings seek out when the world itself seems threatened. They simply can do what others can’t.

At any rate, playing a high-powered game isn’t necessarily better than playing standard adventurers. It offers you different ways to interact with the world, and, depending on your group, that might be just what you need.

Ever have a high-level campaign?Have you tried one of these systems, or know one we missed? Let us know in the comments!