GURPS. Now there’s a name I haven’t heard in a very long time. It is still kicking around–as evidenced by the latest release from Steve Jackson games, which we just got our hands on. So without further adieu, here’s our review of The Discworld RPG’s latest and greatest second edition: 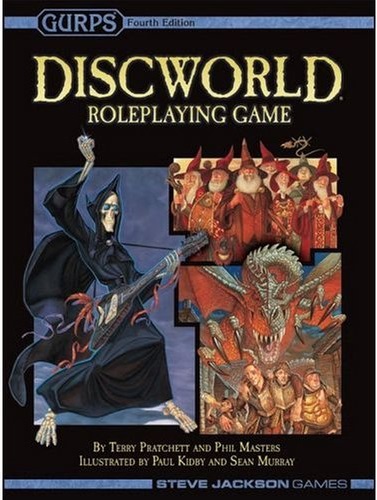 Got another RPG you’d like to see us review? Let us know in the comments!

Oh, hang on, I’m being told that I actually have to explain to people why they’d want to pick up a book about the Discworld, arguably one of the best fantasy settings of all time. Especially since there are many of you out there who’ve never given GURPS a try. And that I should also explain what the book is, and why I like it. So, strap in, because we’re going to go do that.

To begin with GURPS or the Generic Universal Role-Playing System is a venerable name on the gaming frontier. It’s well into its fourth edition (about 13 years now) and is home to all manner of worlds, settings, and genres. In GURPS you can find everything from ancient Roman wizards to futuristic mech pilots and, owing to the compatibility of the rules, wizards who pilot mechs, but that’s another story altogether. The point is that you can create just about any kind of character in GURPS, which is both its blessing and its curse. 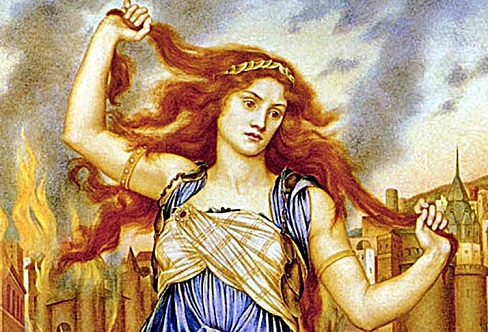 Oh sure, drag me into this.

GURPS as a system is not without its problems. Combat, in particular, is an inelegant throwback to earlier times–there are lots of moving parts that ultimately don’t make much difference in the long run. And given GURPS’ scope there are a number of character options that, similarly, seem cool from a distance but, up close and in practice, are ultimately useless. For instance, you could create a character who is capable of using magic, knows a number of combat tricks–thinking you’re creating a pretty decent gish build, only to find out once combat begins that you know enough of everything to do nothing. It’s very Chekovian, in that regard.

BUT, for all its flaws, GURPS is fantastic at bringing you the feeling of just about anything you try and do with it. Obviously there are exceptions. If you want to do standard fantasy, you’re better off with D&D, Pathfinder, or any of the other systems out there that do that…but for everything else, GURPS is a pretty decent alternative. It handles modern adventures much better than d20 ever did, to say nothing of crazy spy stuff, dystopian cyberscapes, or the aforementioned wizard-mechs.

And roleplaying in the Discworld is anything but standard fantasy.

If you’ve never heard of Discworld, you are in for a treat. Based on the bestselling novels by Sir Terry Pratchett, who is easily one of the greatest writers of all time. His particular blend of humor, wit, philosophy and pragmatic bloodymindedness made a unique world that gave many people (myself included) something to laugh and learn along with. Full of fantastic characters, unrelenting plots, and comedy (with the occasional bit of tragic relief mixed in), stories in the Discworld might resemble stories you know–right up until they are completely unlike them. There’s Cohen the Barbarian, world’s greatest barbarian. 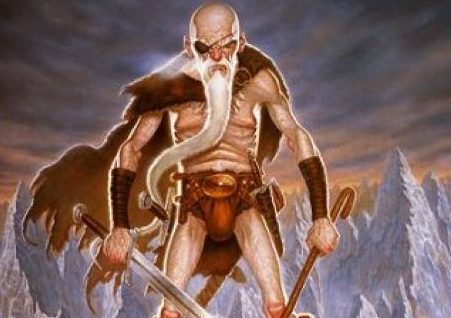 He’s also an octogenarian with diamond-toothed dentures, because he’s been a barbarian for a long time. And he and his golden horde of oldies rampaged around for a while, in search of glory and linniment.

It takes you swiftly through an intro to “what is roleplaying,” and is for all intents and purposes like every other roleplaying game corebook you’ve ever read. It has bits on character creation (which, because this is GURPS, is nearly half the book) and all the assorted skills, combat rules, magic, gear, and setting information you could want.

If there’s one thing that makes the book, actually, it’s the setting information. I don’t mean that it’s the one good part in all the book–I mean, information about the setting suffuses every part of the book. You can’t get away from something that informs on the setting, whether it’s a humorous example in the skill use section, the picture of Rincewind running away right in the middle of the description of phobias, or the Discworld themed flaws/character features. Here’s a look at one:

Troll Brain: You’re a troll or similar, with a silicon brain which operates best in cold conditions. Your purchased IQ represents your intelligence in Chilly or Moderate temperatures. This value falls as ambient temperatures rise. In warm conditions you suffer -1 to IQ. This becomes -2 in a Hot environment, -3 in Very Hot temperatures, and -5 in Severe Heat. […] Balancing all this, you gain some benefits when the temperature is especially cool: Freezing conditions give a temporary +1 to IQ, Extreme Cold gives +2, and Intolerable Cold can grant even more, at the GM’s whim. If you’re locked in a magical freezer, you may gain genius-level insights into your situation — or the nature of the universe.

That last part is a direct reference to an event from one of the novels, Men-at-Arms, when a troll constable of the Night Watch gets locked in a freezer and begins to understand the very meaning of existence.

Things on Discworld get a bit…weird. To say the least. But the book is full of flavor like that. It drips from every chapter. even if all you’re doing is mining the book for information to use for your own campaign, there’s a lot of humor and heart present here. Reading the excerpt fluff feels a lot like reading something from one of the novels. And the rules do a fantastic job of adhering to the humorous tone. They let you know right off the bat, that you’re going to be grimdark if you’re playing this, and the rest of the book reinforces it.

With flaws like Delusion (Spelling My Name Backwards Disguises It Perfectly) available for Vampires, or the ability to play as an arcane automata–the book is no stranger to the levity that characterizes the Discworld. It’s no stranger to pretty much anything that characterizes it. They’ve got rules for pretty much anything you could want to play–whether you’re running a campaign set in Uberwald where the PCs are all members of a Vampire clan obssessed with throwing Masquerades and playing Requiems, or being Guards in the Night’s Watch, or a situational comedy about peasants who populate the Ramtop mountains, or a party of Sapient Pearwood suitcases (gods help us all) this book has got you covered and then some. They have helpfully provide guidelines for running different kinds of campaigns–and I really like them. As a GM I found them helpful. 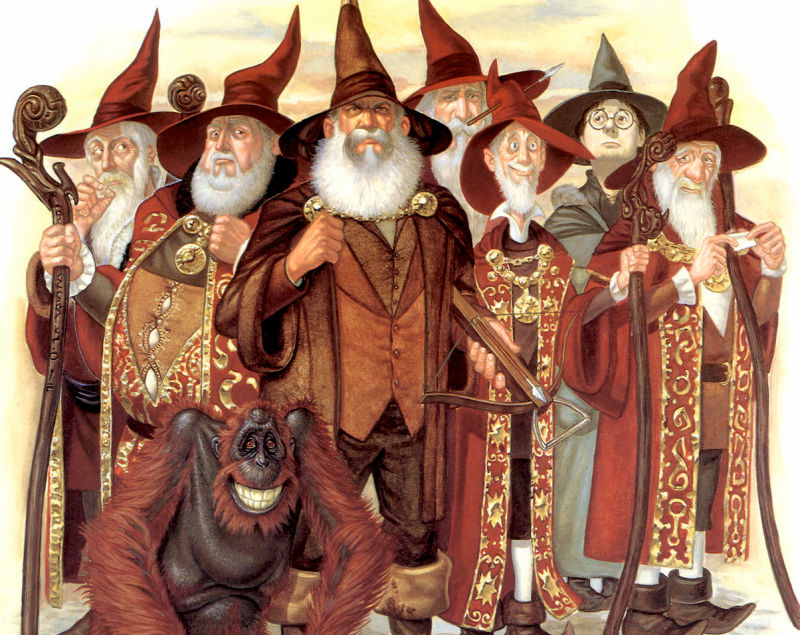 A party of stuffy, argumentative wizards and their mon–er–orangutan Librarian are almost normal in comparison.

I’d say it was excessive if it wasn’t so enthralling. You definitely have to be in the right frame of mind to go all in on this sort of thing–there’s an entry on “interesting occupations” that details things like Mad Doctors and Guerrilla Mimes, and the chapter on Magic and the Unseen University is about what you’d expect. Even the sample character creation, Jemzarkia of Krull is laden down with things like Highheeled Heroine and Reputation (Cool enchantress).

But, if you’re looking to have a campaign set in the Discworld, odds are good you’re looking for an abundance of detail. And as I’ve mentioned, that’s what you’ll find. Especially since this second edition has updated the lore to include all the latest books, including Unseen Academicals, THUD!, Going Postal, and Making Money. GURPS is thorough, if nothing else, and they have rules modeling just about every aspect of the world here–again, it takes a little work, but the book is so delightful to read, I found myself getting caught up in footnotes.

But, full disclosure, I love the Discworld novels. And this was getting a chance to revisit something I love from a different perspective. So, if you can get past the clunky nature of GURPS, especially if you love humor, this book is well worth the investment.

Eh what? Another outro? But we’ve already had one–fine! Have you tried this out? Got DW Feels? Let us know in the comments!

Author: J.R. Zambrano
Bell of Lost Souls Staff Writer and DM, J.R. covers RPGs of all stripes and on occasion eats sandwiches. You can ask him about either at [email protected]
Advertisement
Review RPGs Rules Steve Jackson Games
Advertisement