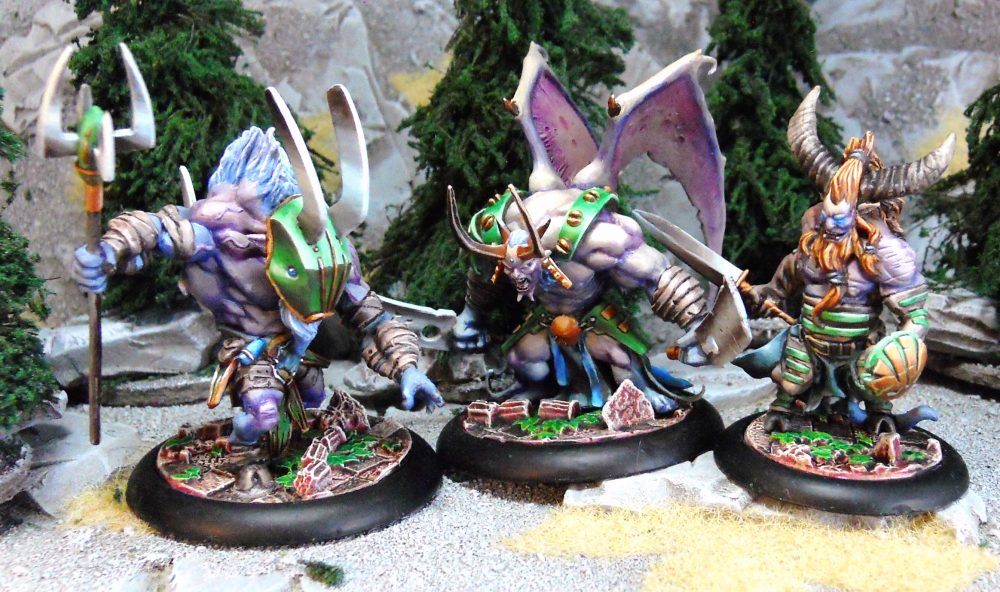 It’s time for another Wrath of Kings painting article. 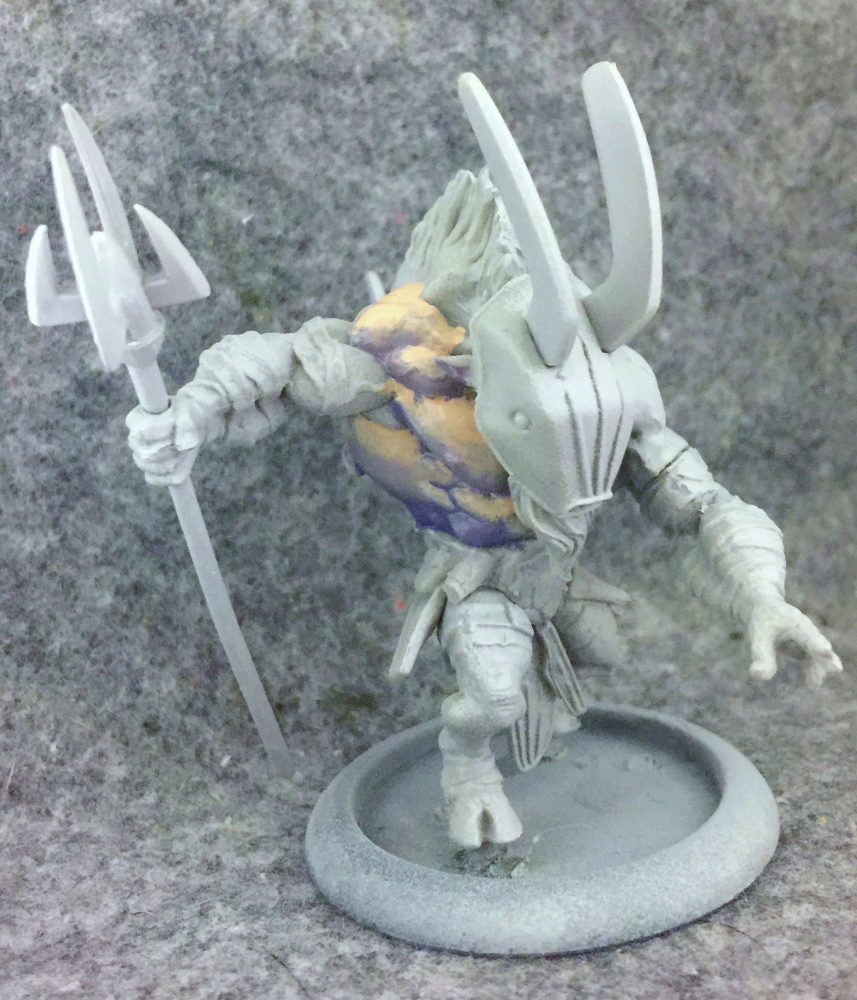 This thing is called a Rathor. It sounds like a character name, but you can take a bunch of these guys. Like 12 in a large enough game, but that would be silly. There are lots of specialists to choose from in Wrath of Kings – in Nasier and every other faction. I’ll be bouncing between three of them in this article in fact.

I wanted a weird unnatural skin tone for this guy, so I started with a Rucksack Tan basecoat shaded with a custom purple mixed from Exile Blue and Beaten Purple. I keep a pot of this purple pre-mixed for when I need a purple that isn’t as warm as Beaten Purple. The Rucksack Tan is highlighted with Menoth White Highlight. 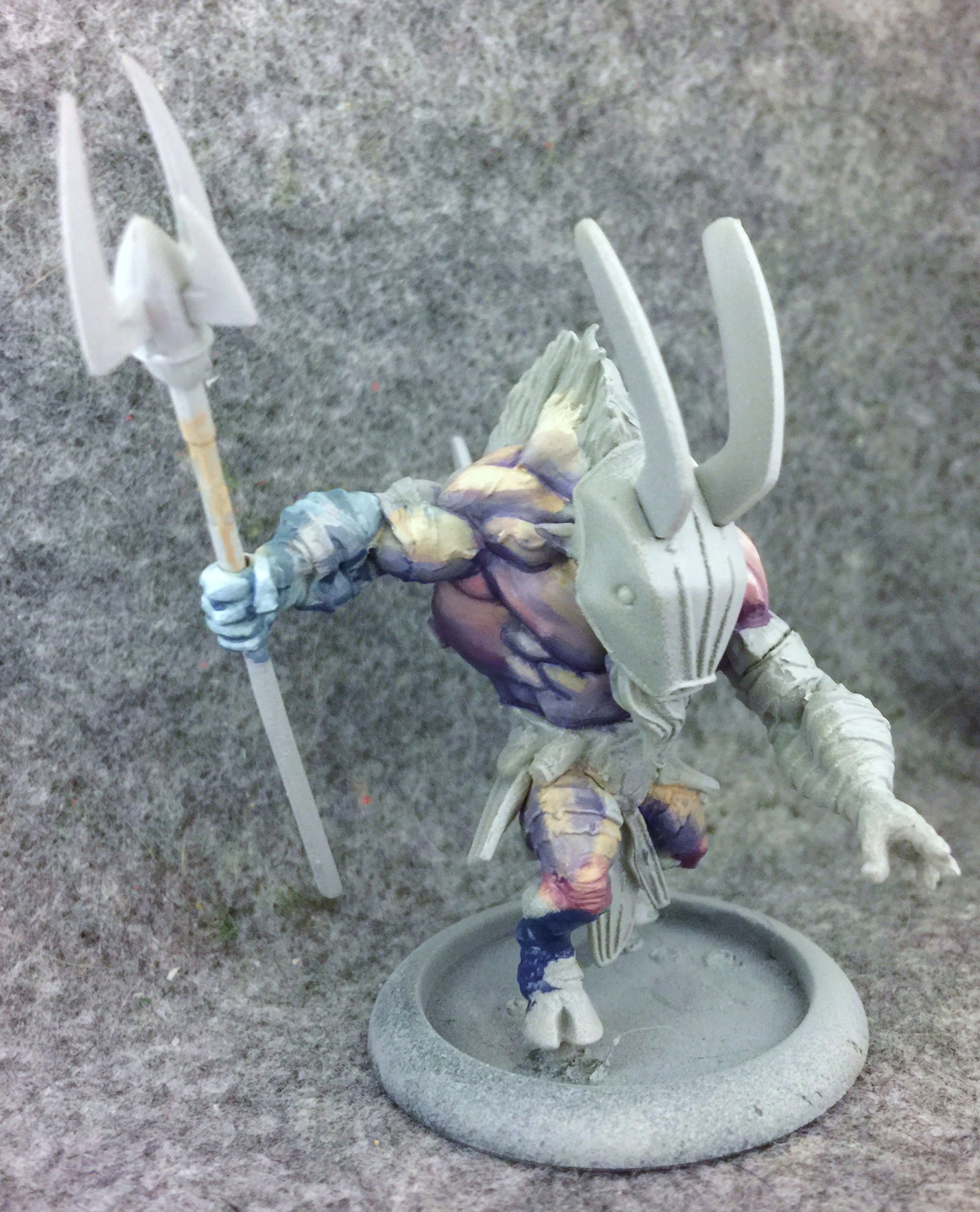 In the end I decide to work a little more warmth into the skin, blending in some pure Beaten Purple and even a little Magenta into the mix. As I get closer to the hands, I start using pure Exile Blue for shading. There’s a lot of exposed skin on this model so I find varying the tone can have great effect. 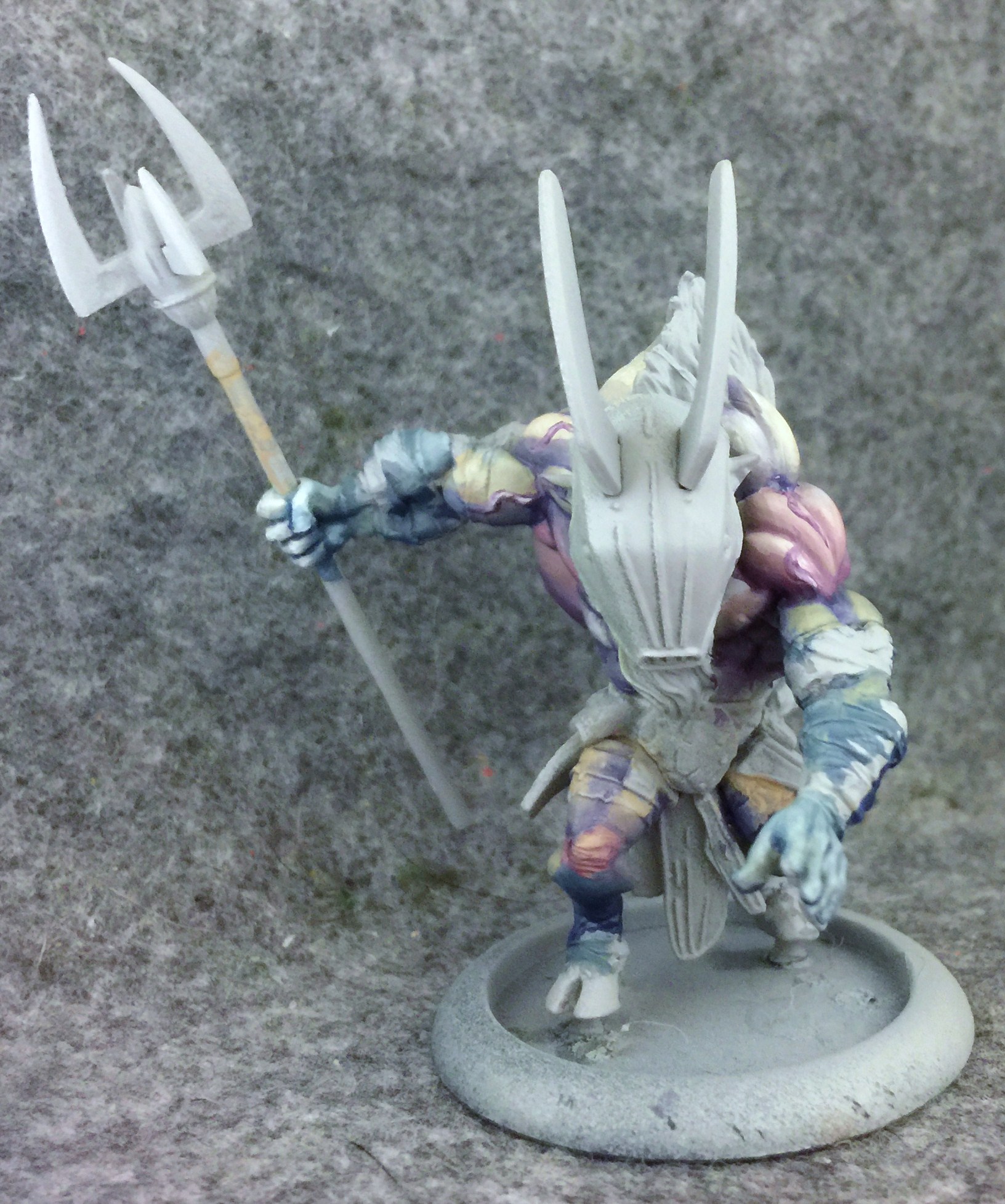 Here he is from a different angle as I try to resolve all the little details like the knees and veins. 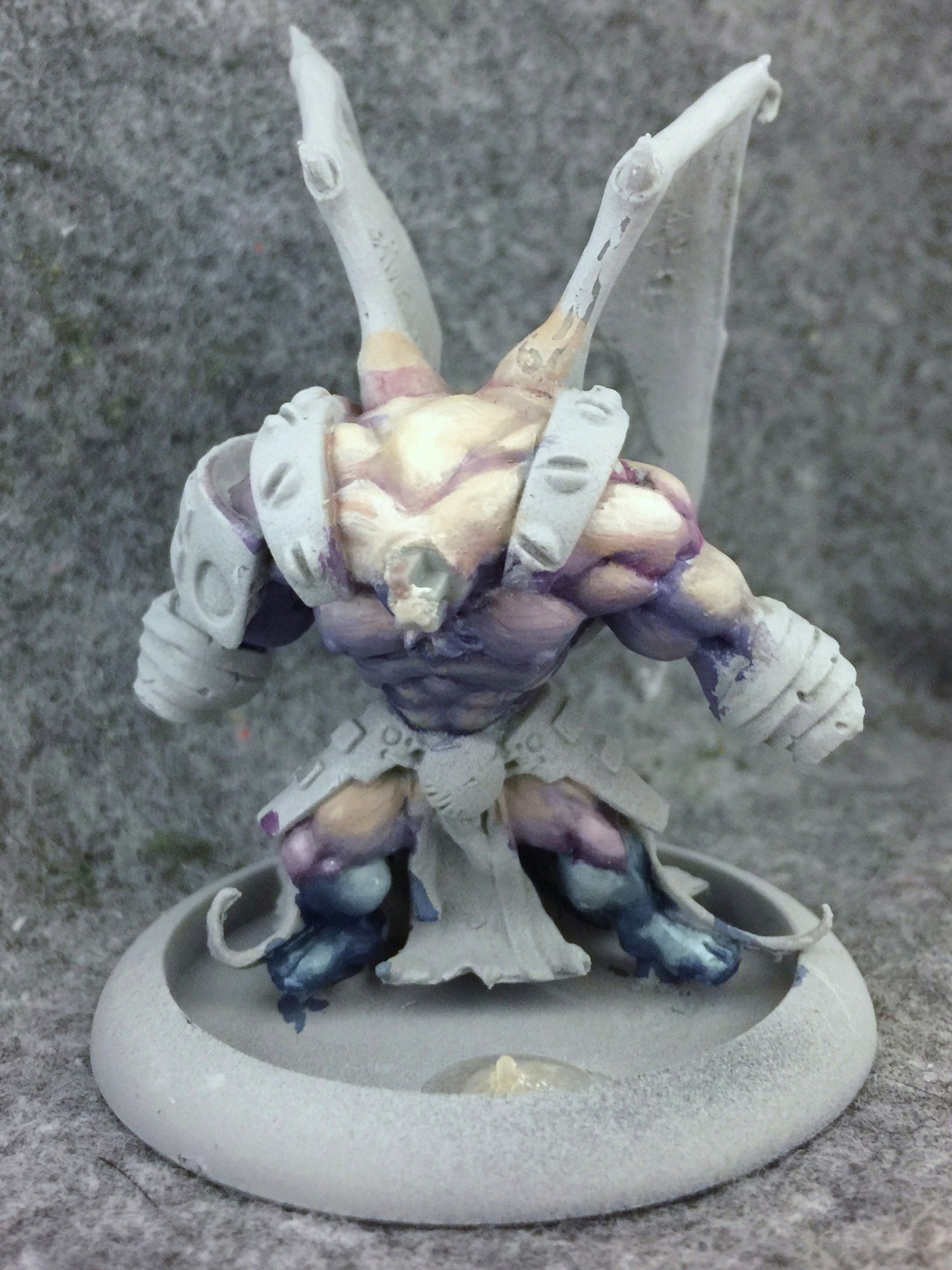 Quick look at a different specialist, the Greatwing. I’ve used less of the warm magenta tones with more of the darker blues to give this guy a more rugged feel. He’s a close quarters fighter, unlike the sorcerous Rathor. 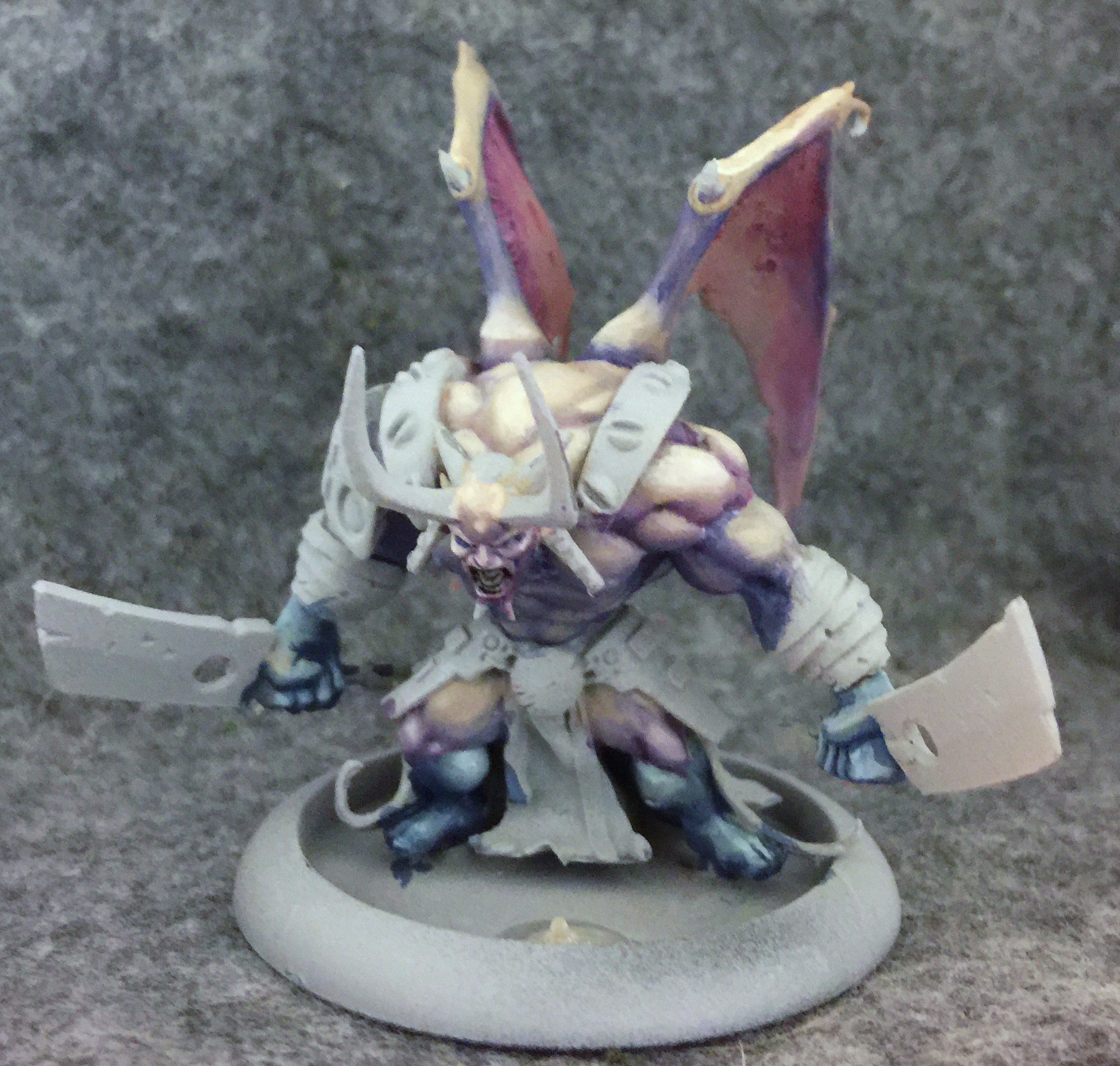 I do add some Magenta to the wings to add some army unity, and because I think it looks cool. 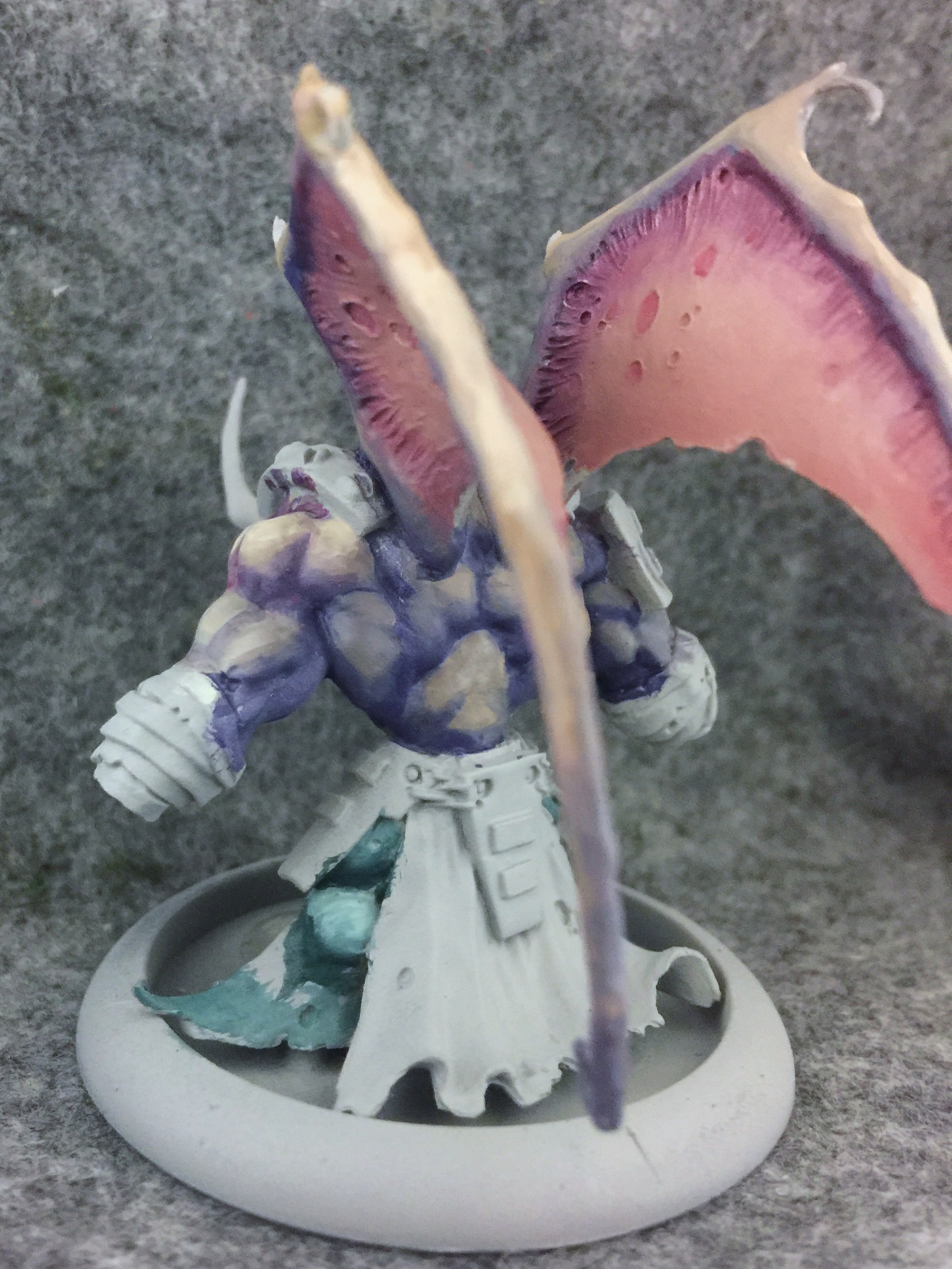 We’re focusing on the back now not to look at the skin more but to focus on that sliver of dark blue skirt down there. If you read my Ashmen painting article you’ll recall that dark robes are a prominent theme. These are painted the same way. The base coat is P3 Coal Black which is highlighted with Underbelly Blue. The “third” color is the deeper shade tone: Thamar Black toned with P3 Red Ink and some Bloodstone. I think the adding some warmth to the black adds a nice contrast to the bluish Coal Black. 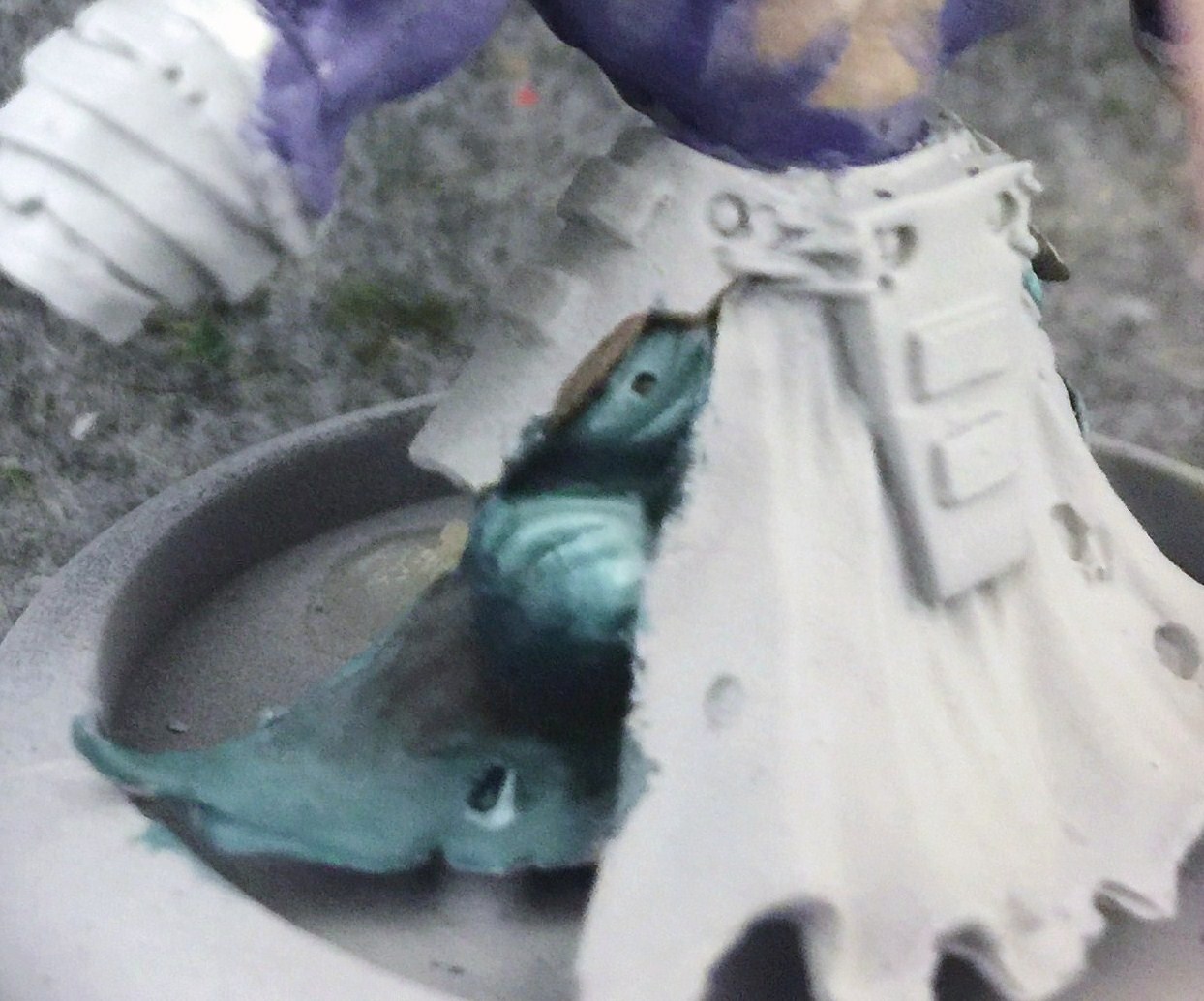 Here it is cleaned up a little more. 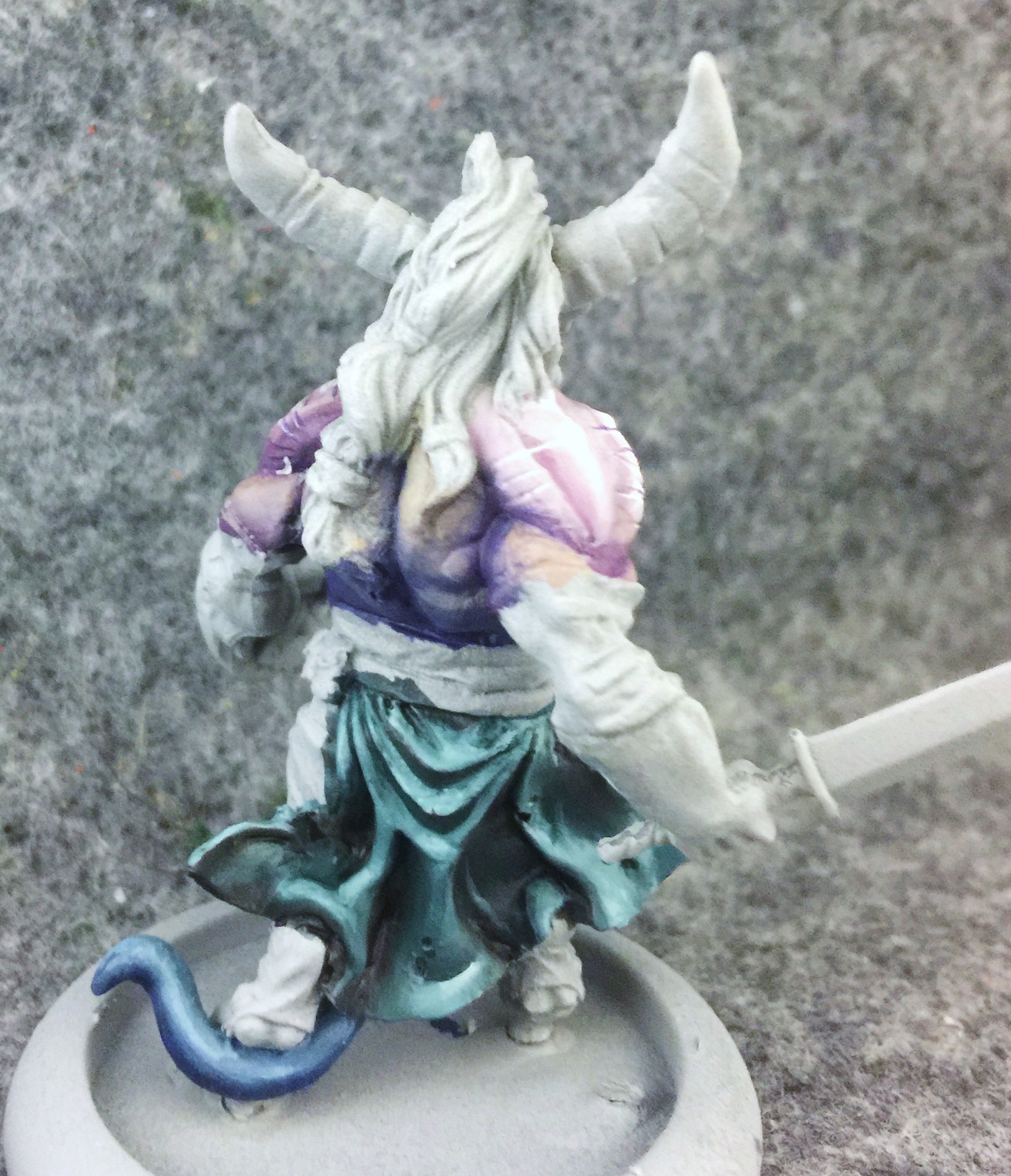 I really should have used this Longhorn for the WiP of the dark robes though, though given how much more detail there is. 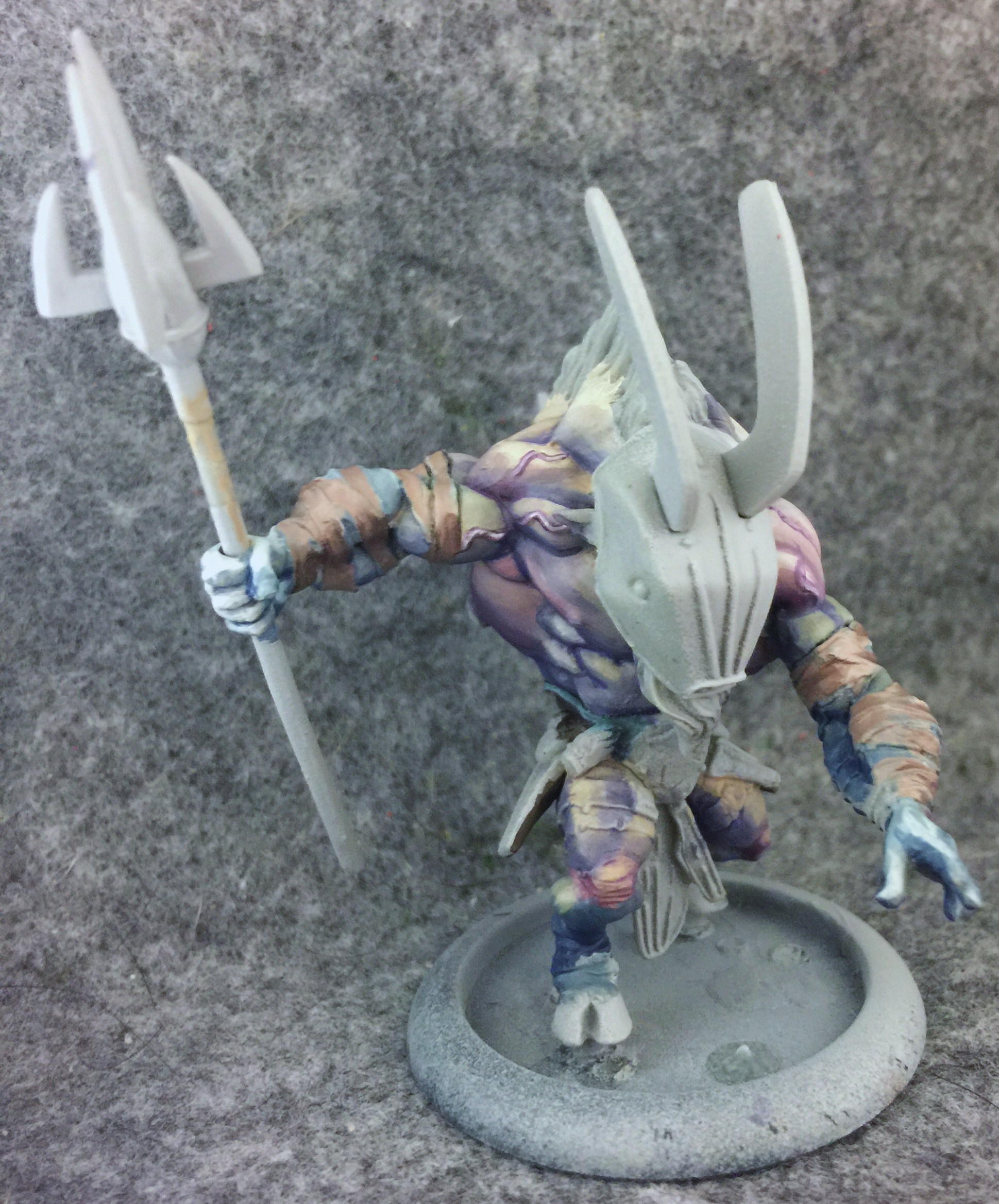 Back to this Rathor for the next step. I’m working on the brown leather now. He’s covered in these bindings. I was tempted to make them the same blue/black as I showed in the last step, but I decided in favor of the warm browns. I start off by defining all the straps with a mix of  Umbral Umber and Ryn Flesh. 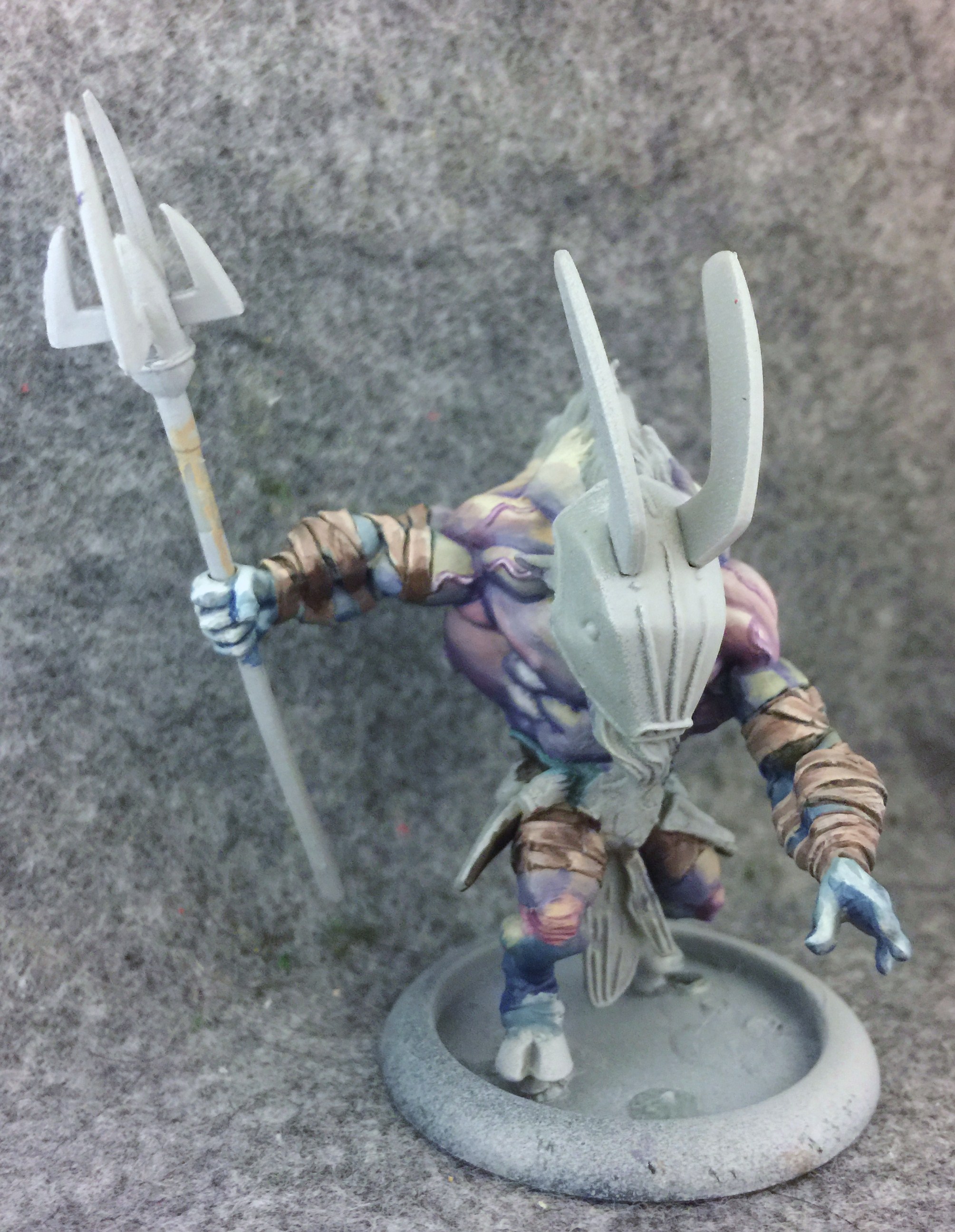 I add more shading with pure Umbral Umber and increase the amount of Ryn Flesh in the mix for stronger highlights. For the shadows, I use Thamar Black with some P3 Green Ink and Ordic Olive added. The idea is that this added bit of cool tone will make the warm highlights in the Ryn Flesh pop even more. 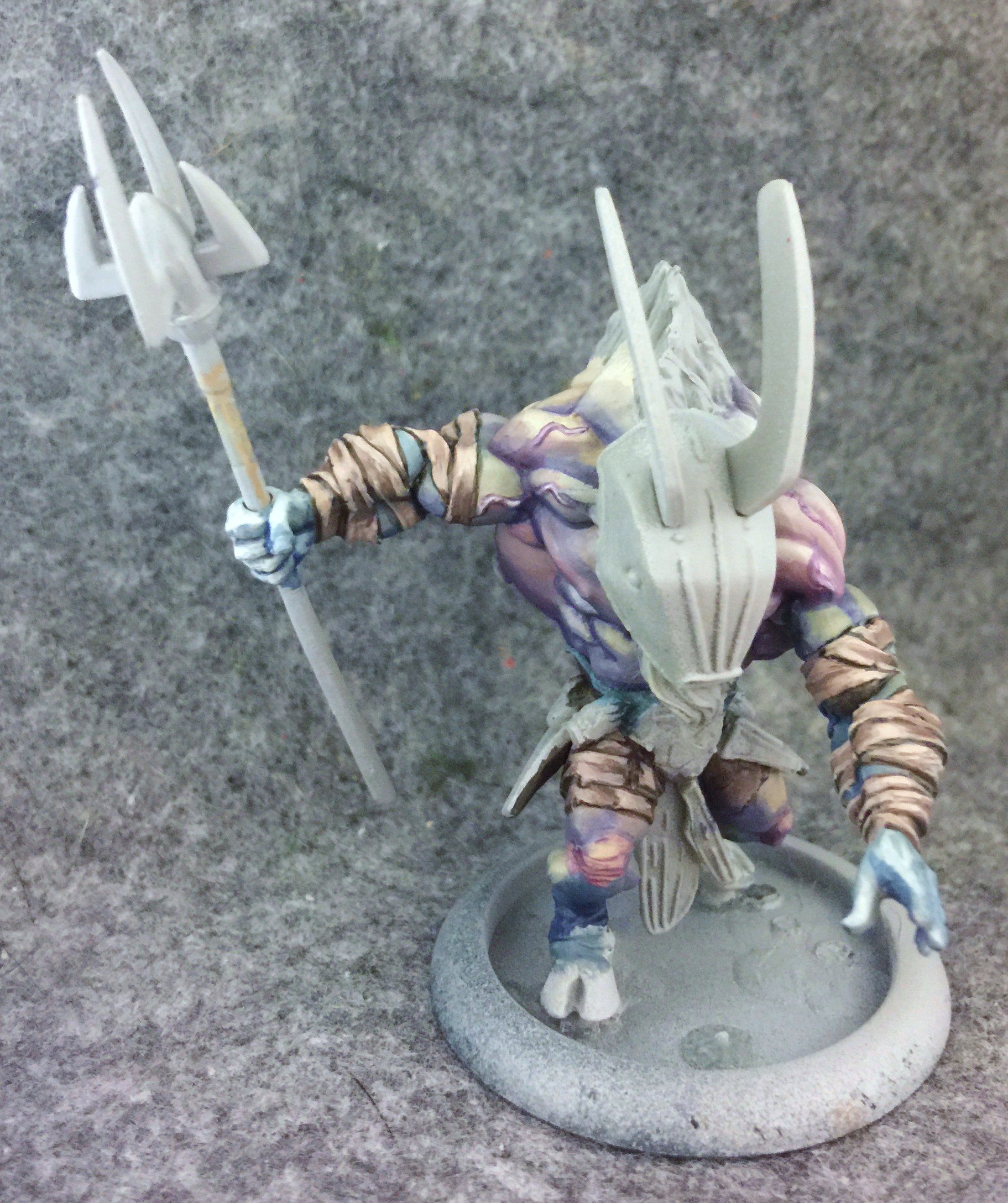 Here, I’ve finalized the leather straps, hopefully balancing out the highlights and shadows for the best effect. It was a bit tricky to make the straps contrast well with the skin, which has similar warm and pinkish hues. Fortunately the blue I used on those parts of the skin helped a lot with that endeavor. Fwiw I did a practice model before this one to see how the colors would work out. 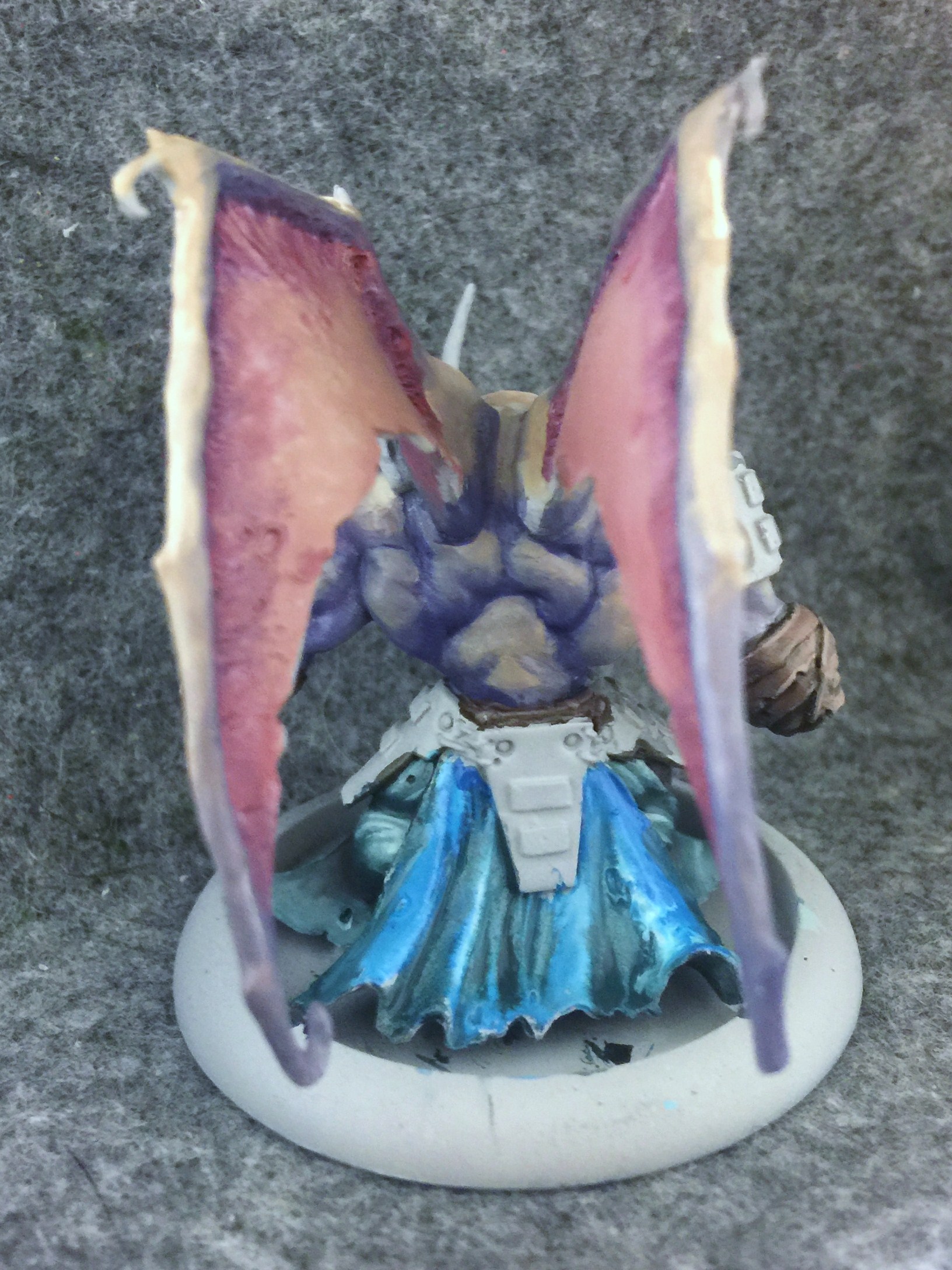 We’re moving back to the Greatwing for this next step, since there’s very little of this blue in the Rathor. I start it off with a basecoat of Cygnar Blue Highlight with the same warm black I used with our previous blue for shading. Hghlights are added a little bit of Menoth White Highlight. 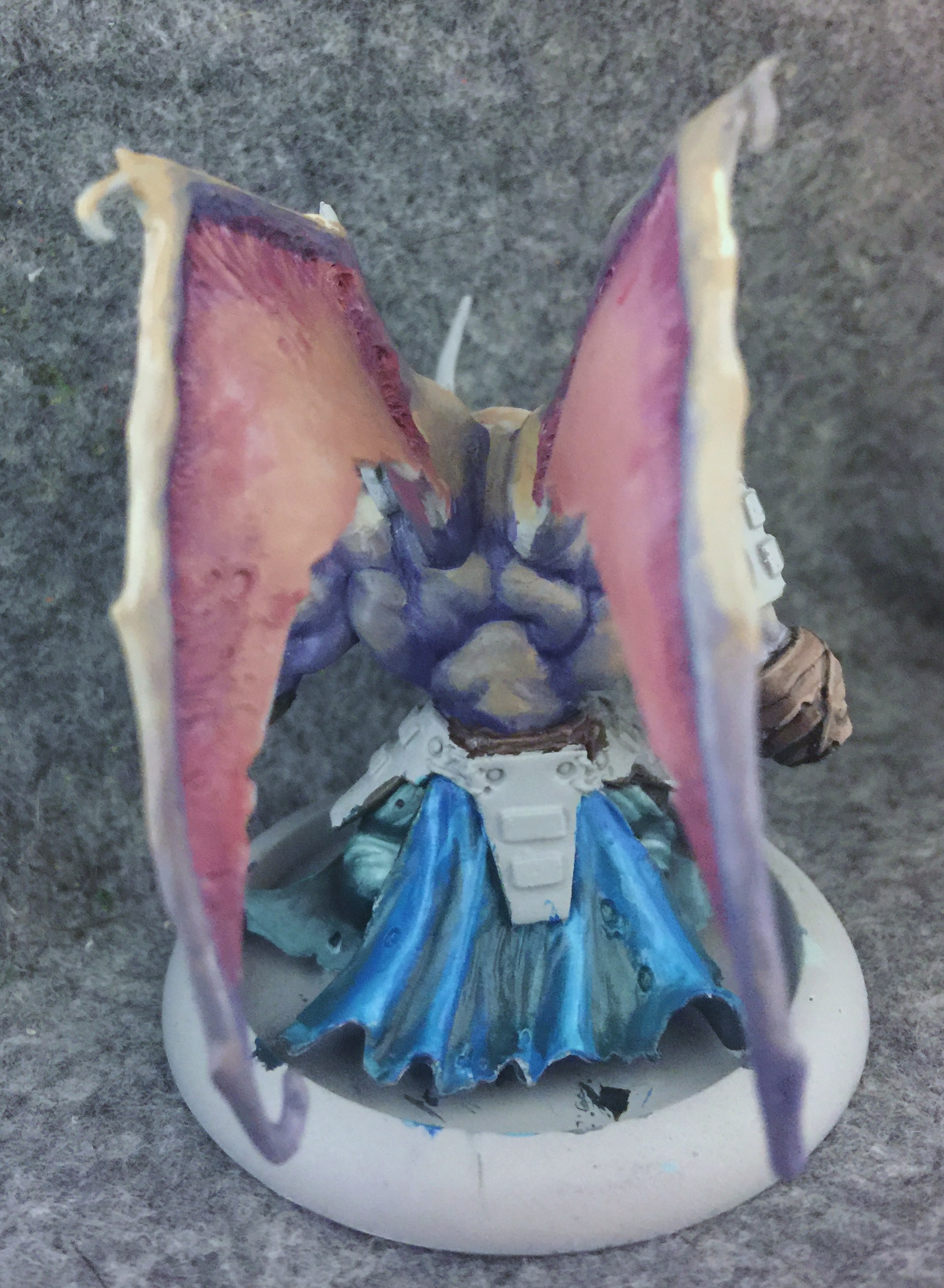 All the same colors are used here but I’ve just cleaned up the blending a bit. If it looks a bit odd it’s because these colors are pretty glossy and they’re reflecting a lot of light. 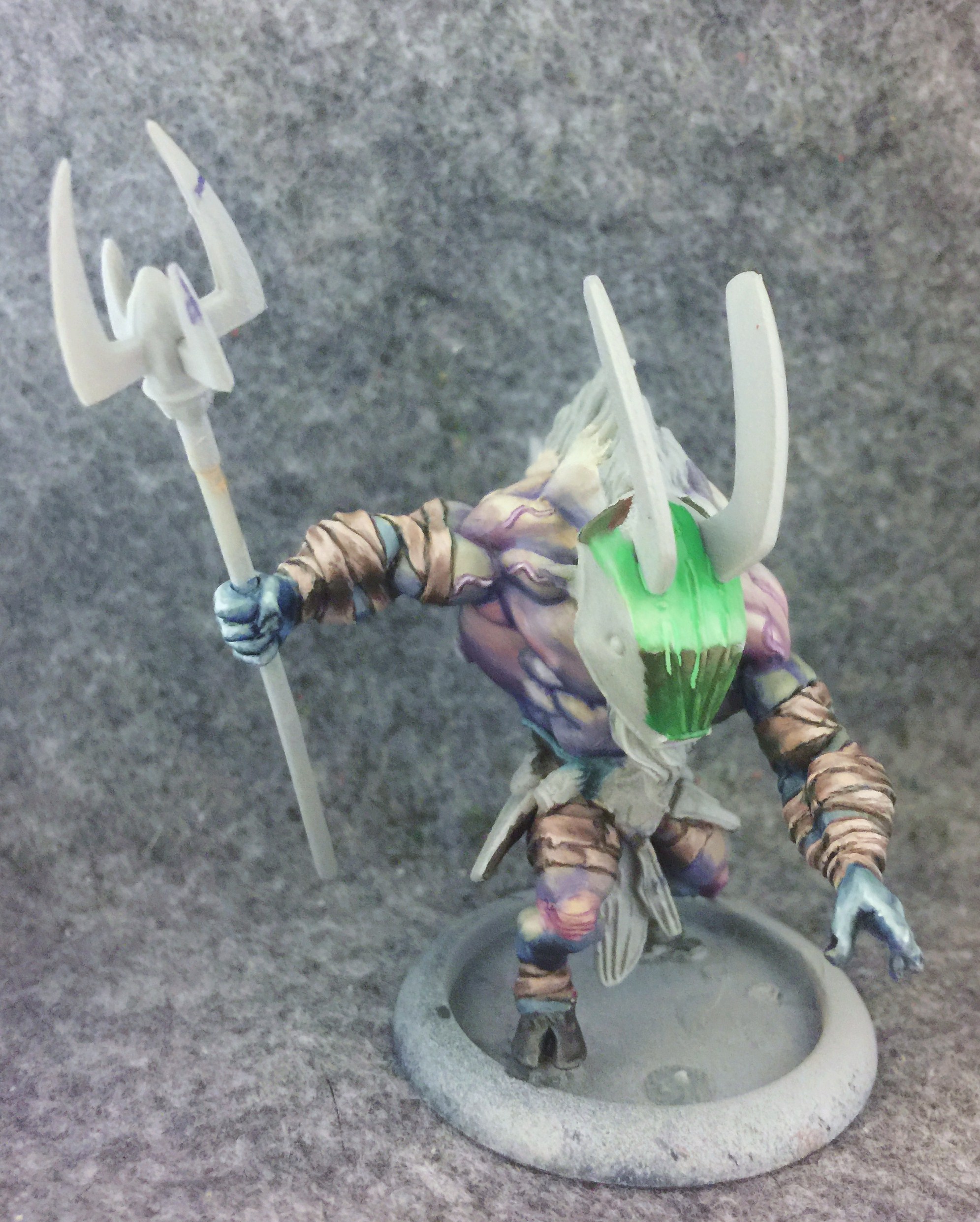 We have a lot out of the way now so I’m moving on to the laquered armor. I’m beginning to rough it out using Iosan Green and Umbral Umber. Menoth White Highlight is used again to lighten it further in certain areas. 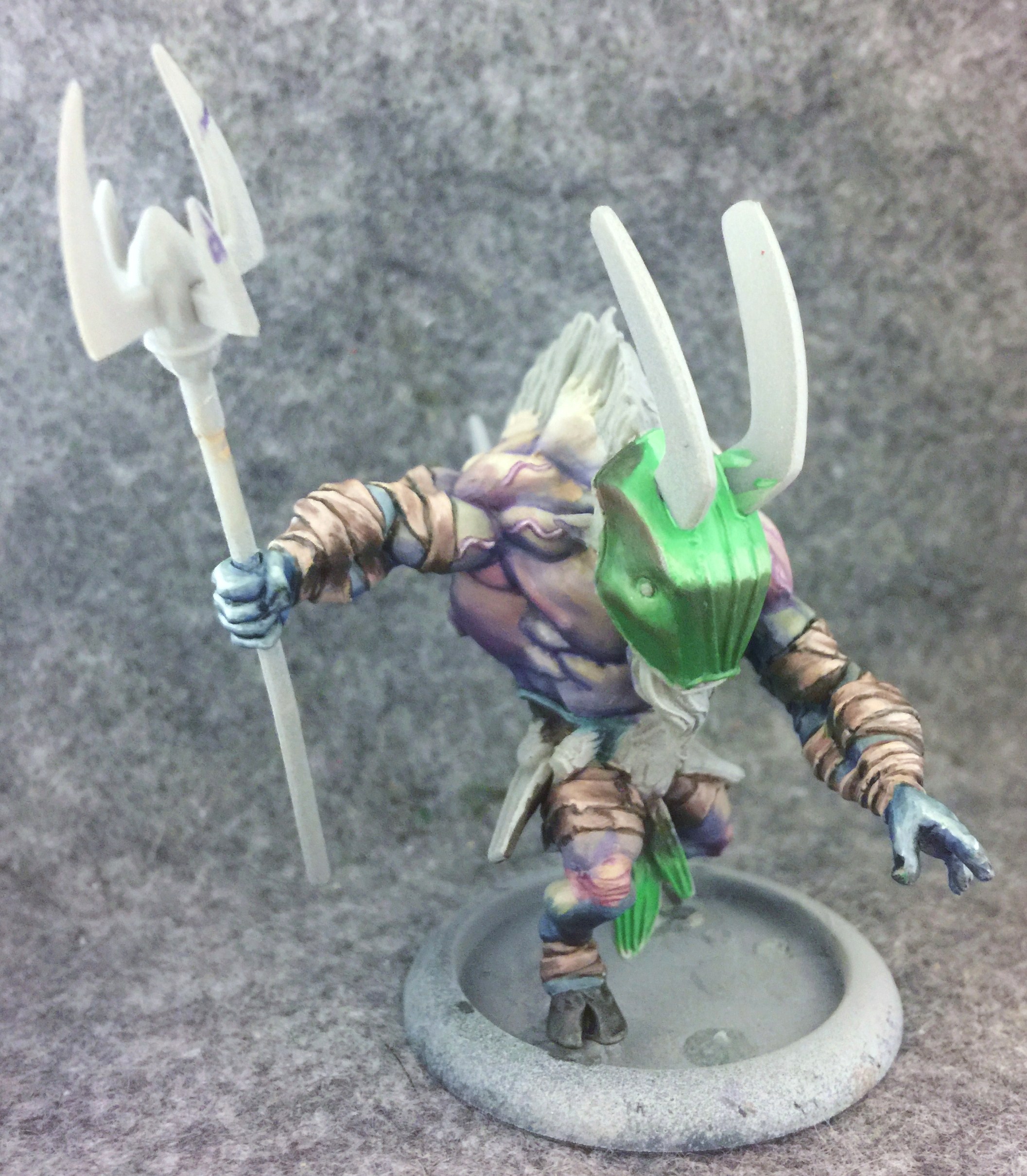 Here I’ve developed the helmet a bit more and done some work on the other plates in various areas around the body. 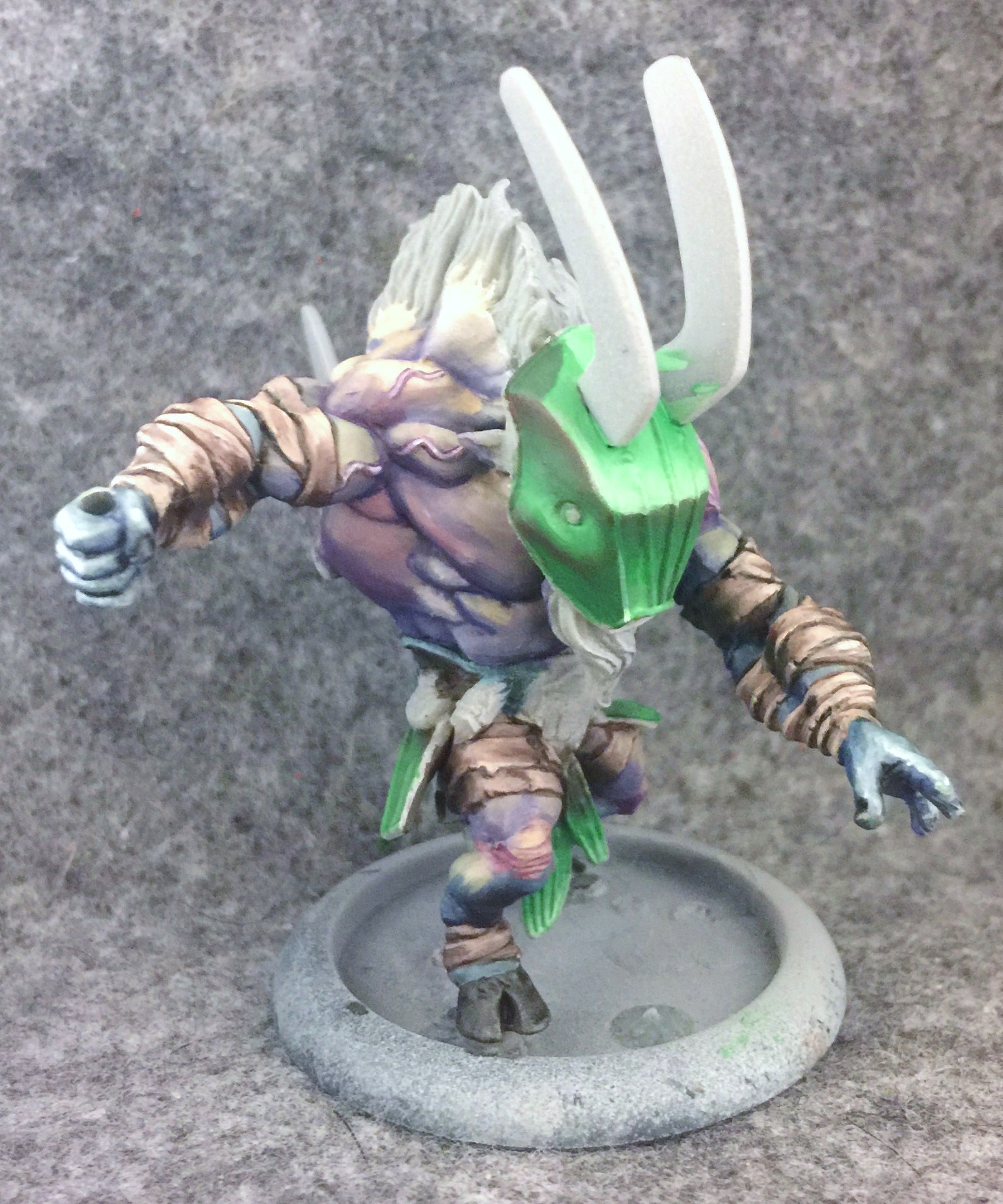 Here I’ve smoothed everything out even more and I’m ready to move to the next step. 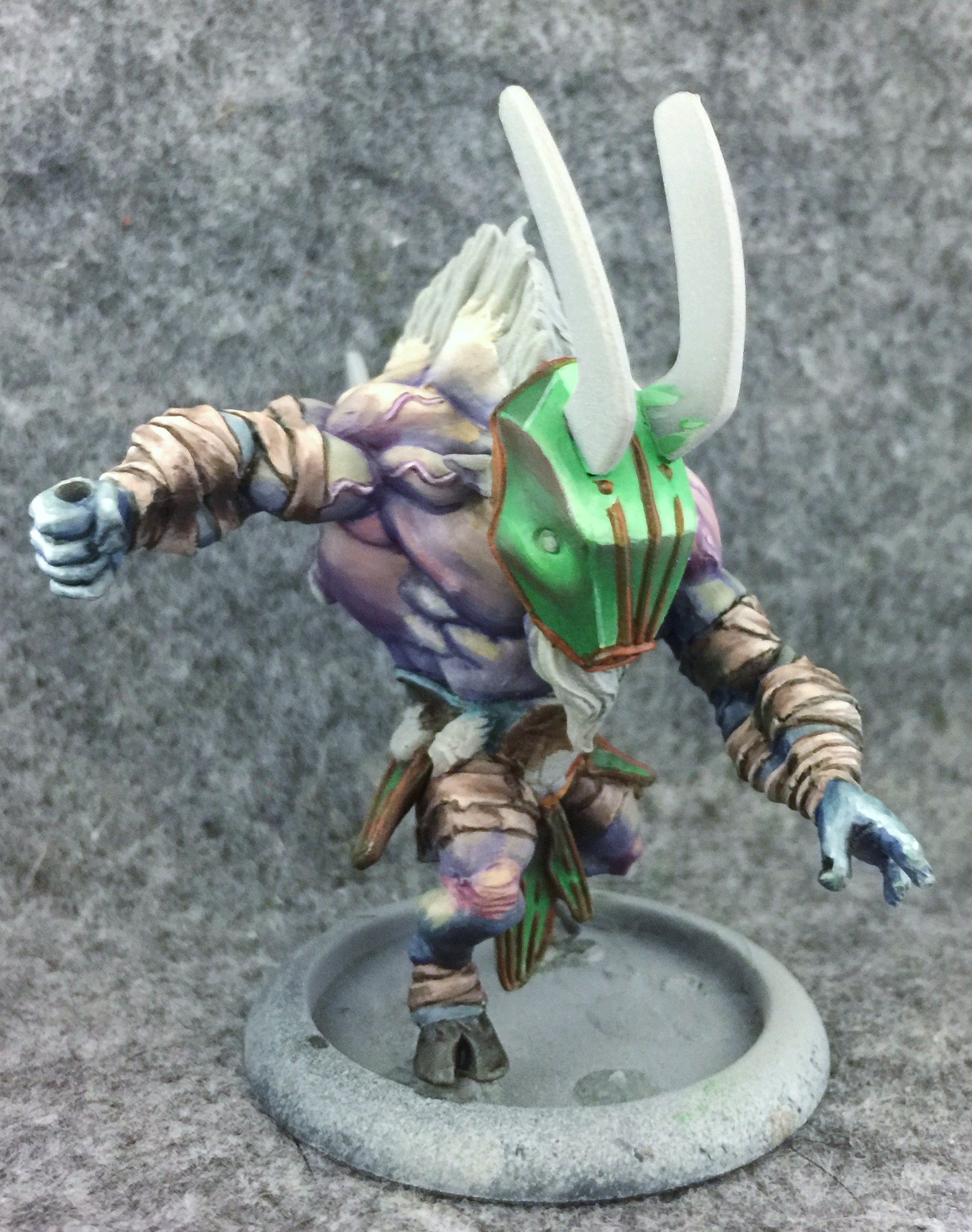 Now it’s time for the gold accents. I start by blocking out all these tiny details with a basecoat of Bloodstone with a little of that warm black mixed in. 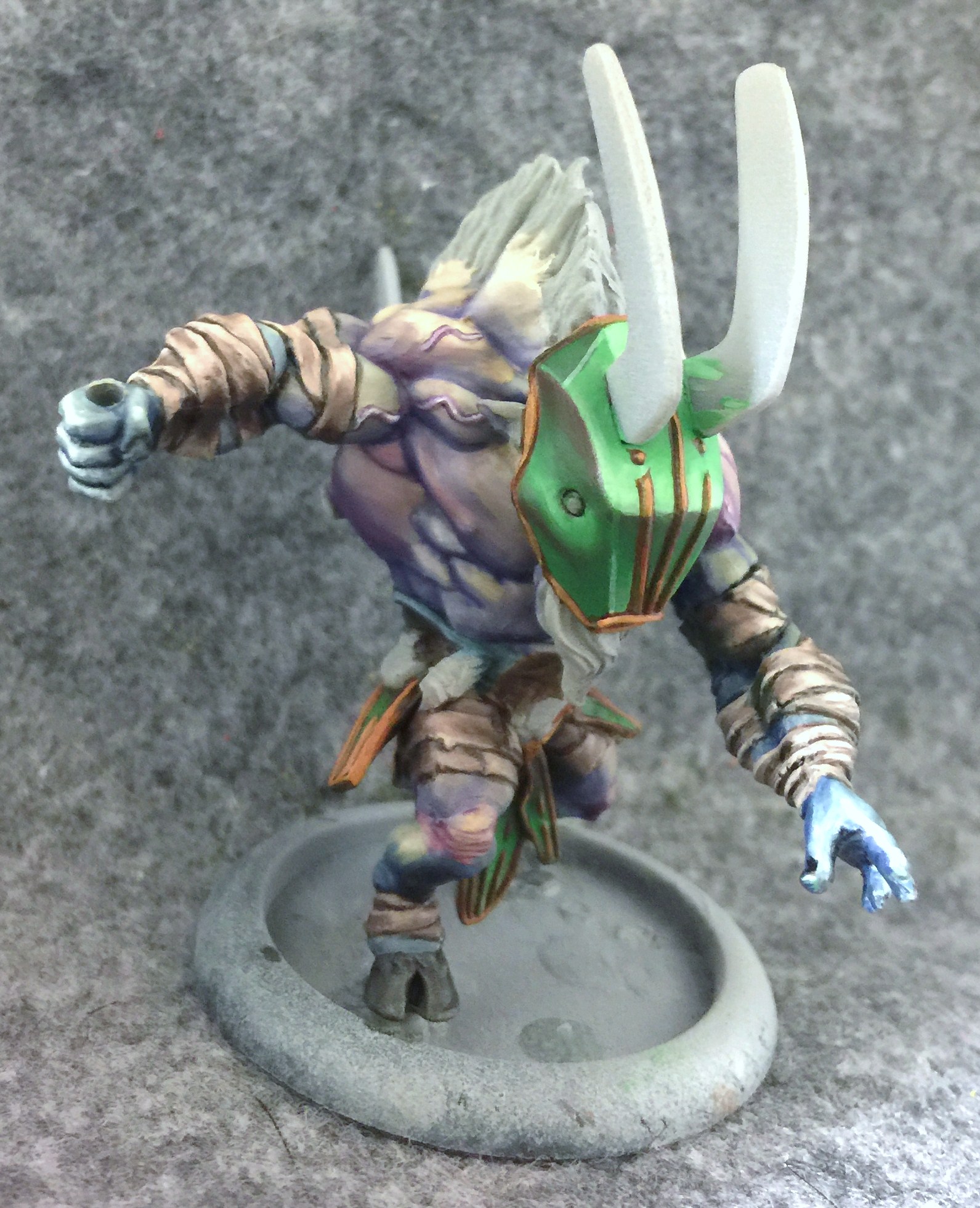 I add more Bloodstone on top of my dark basecoat. In some areas I start adding highlights by blending in some Sulfuric Yellow. 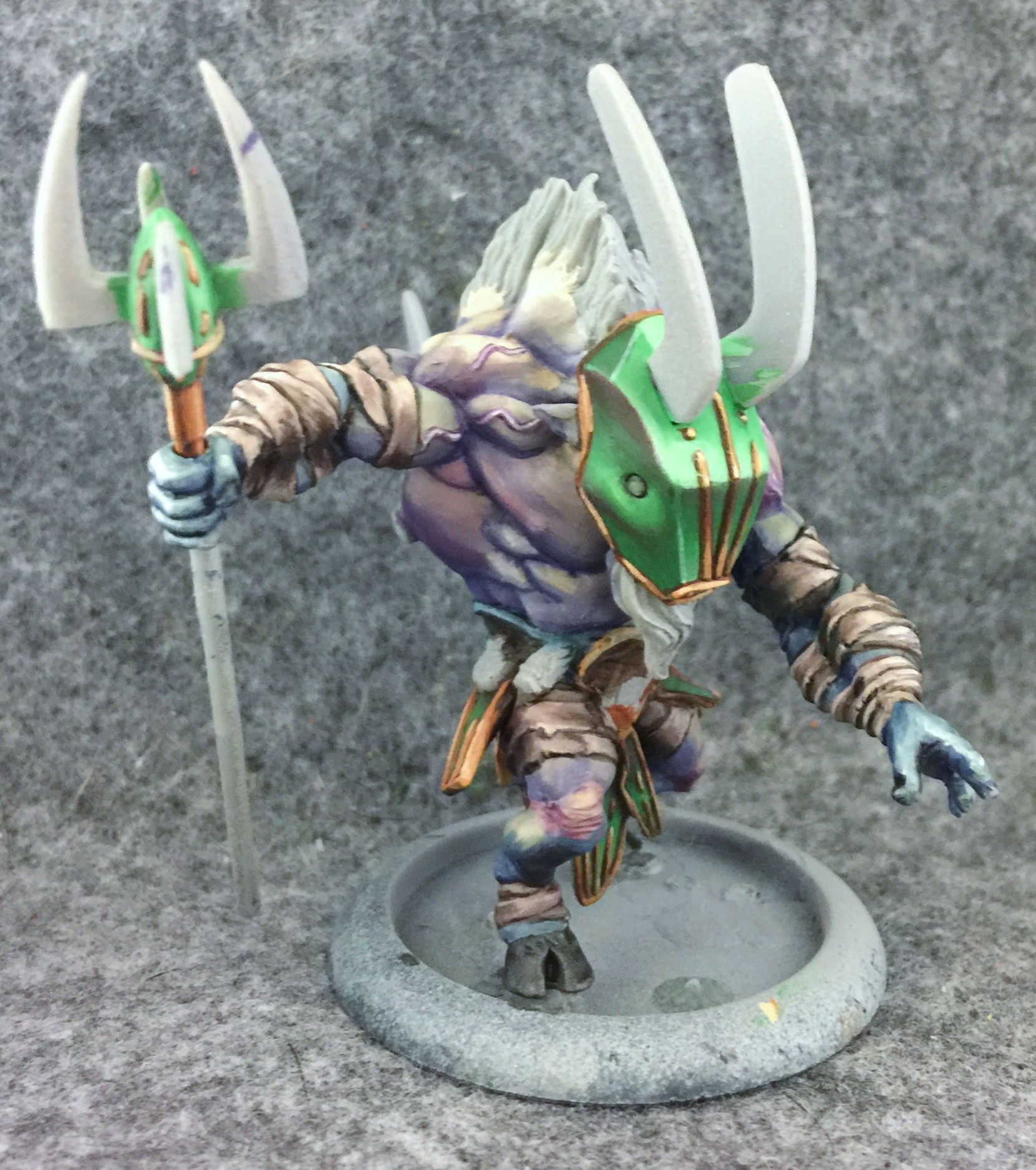 To finish it off, I create a highlight tone by mixing Menoth White Highlight with some Sulfuric Yellow and Bloodstone. 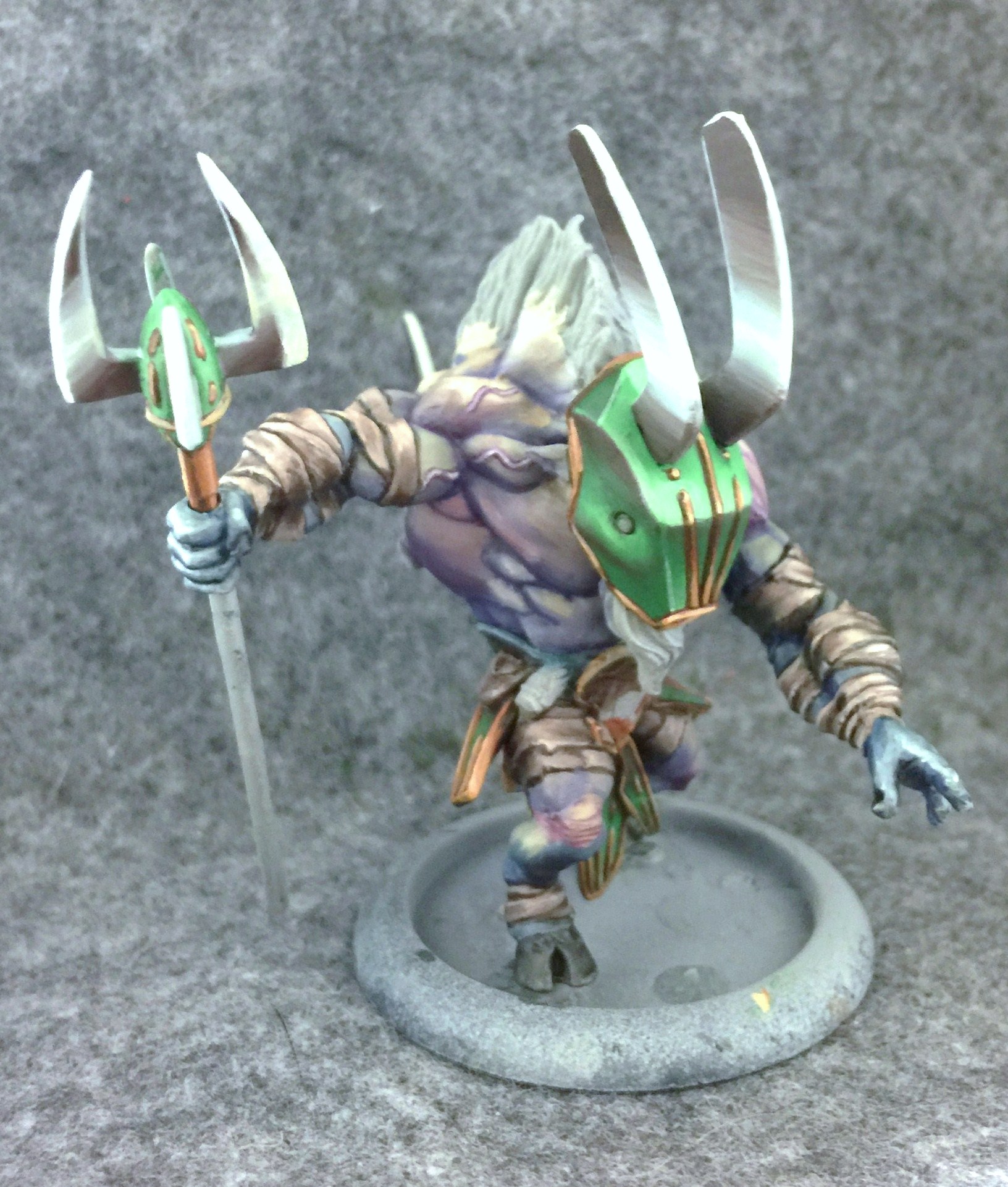 The blades are yet another three part process. The central highlight is Menoth White Highlight which is blended into Underbelly Blue then into my warm black mix. Once the central gradient on each blade is complete, I add a line of Underbelly Blue down each edge, which helps complete the metal illusion. The other WiPs of this step had such bad glare for some reason that they were unusable. The Ashmen painting article has slightly better pictures of the process. 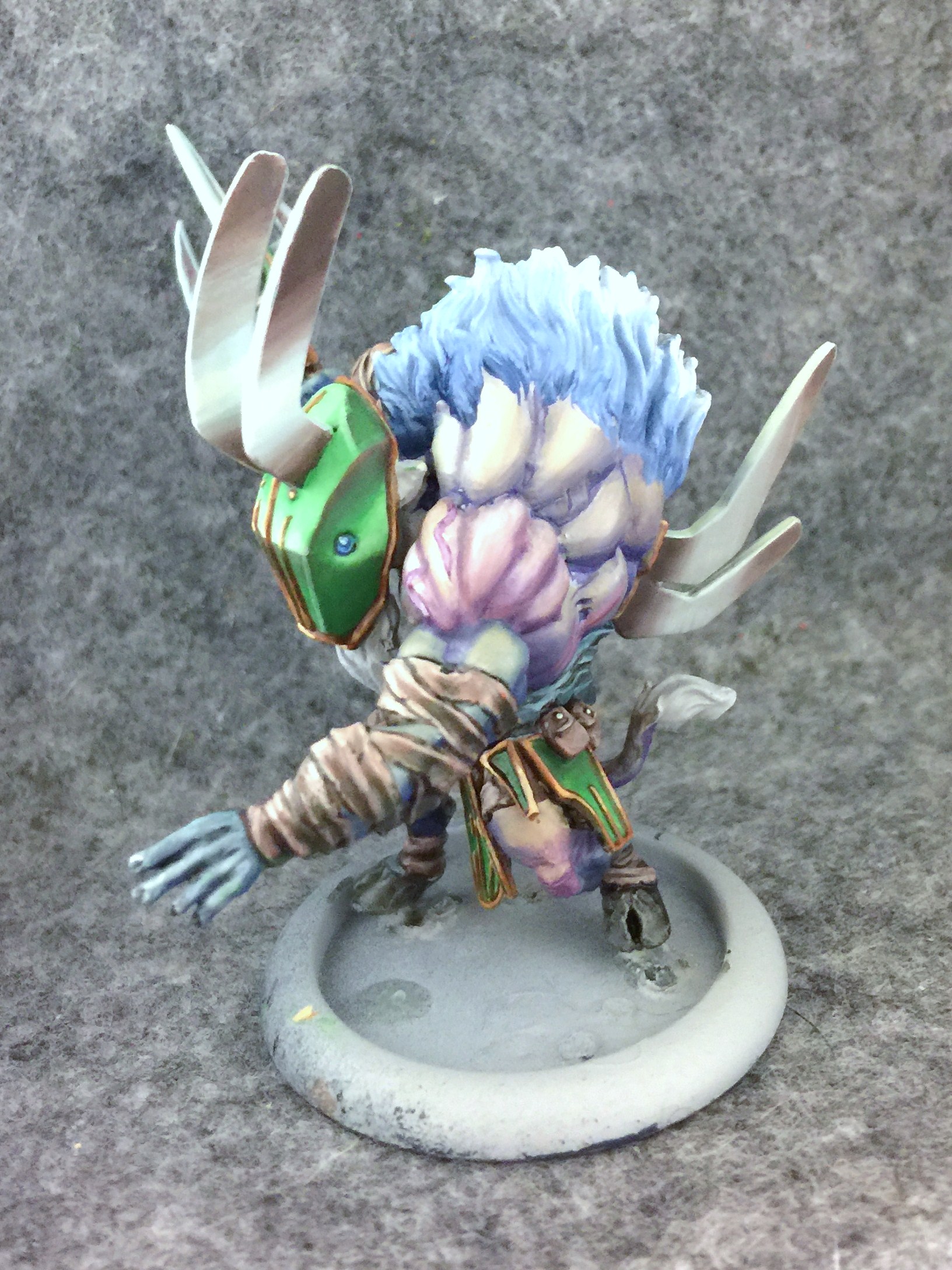 We’re getting close to the end. The next step is the ridge of fur down his back. I started off wet blending a three part gradient of Exile Blue, blended into Frostbite, blended into pure Morrow White. 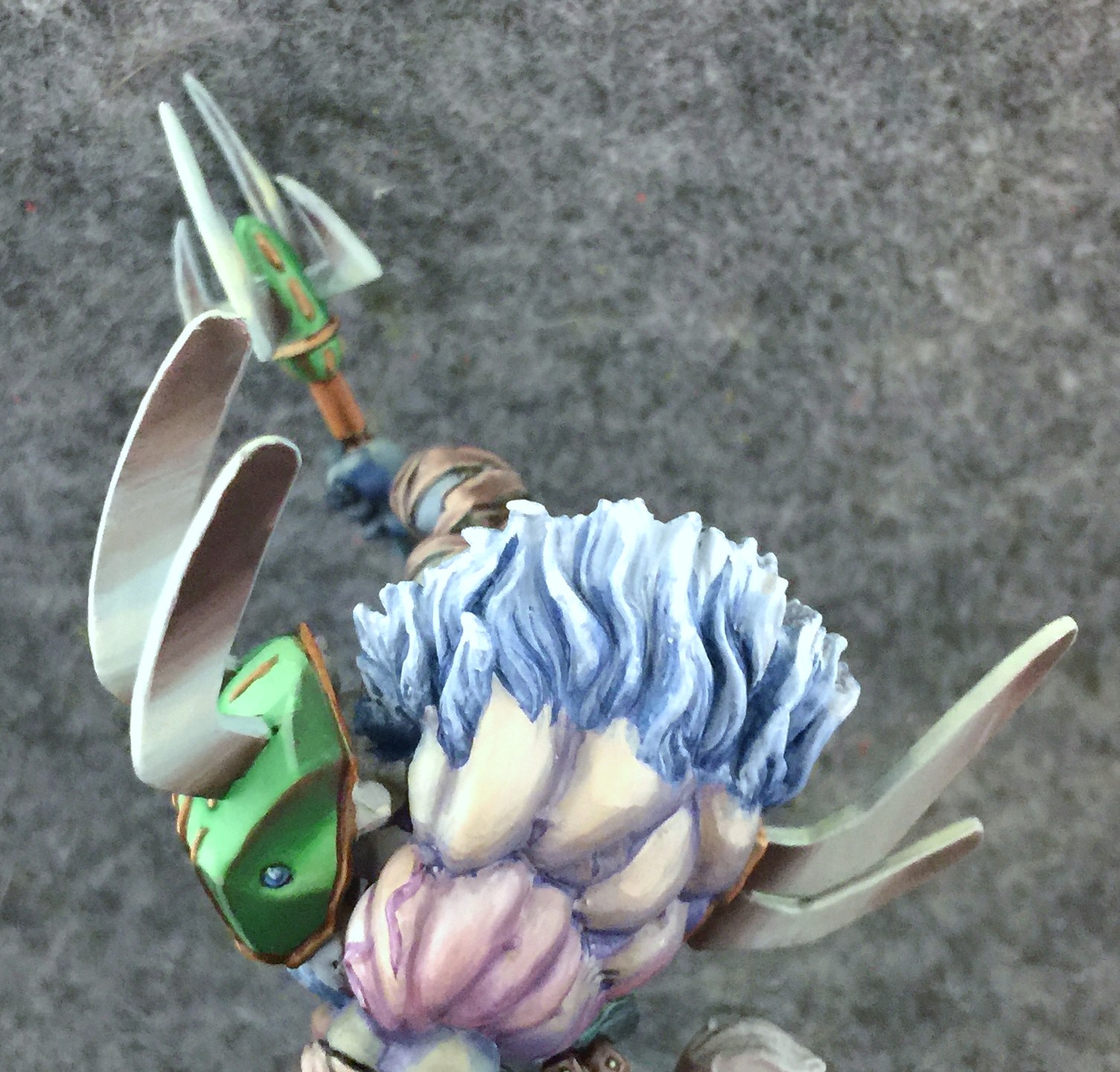 Then I carefully shaded the individual clumps of hair with Exile Blue. 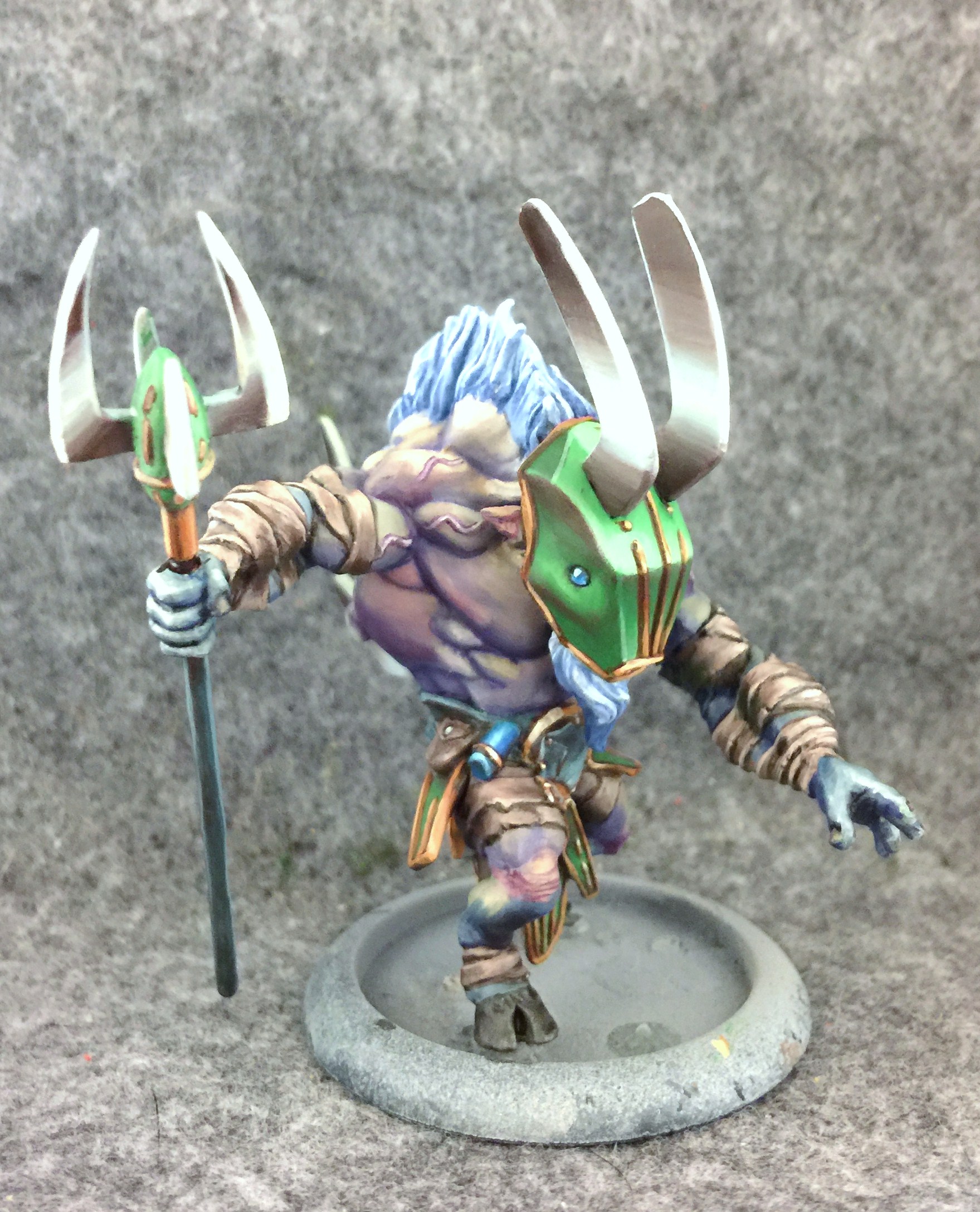 Here’s one last shot of the Rathor. The only place I ended up using the Cygnar Blue was the peculiar round object hanging at his belt. 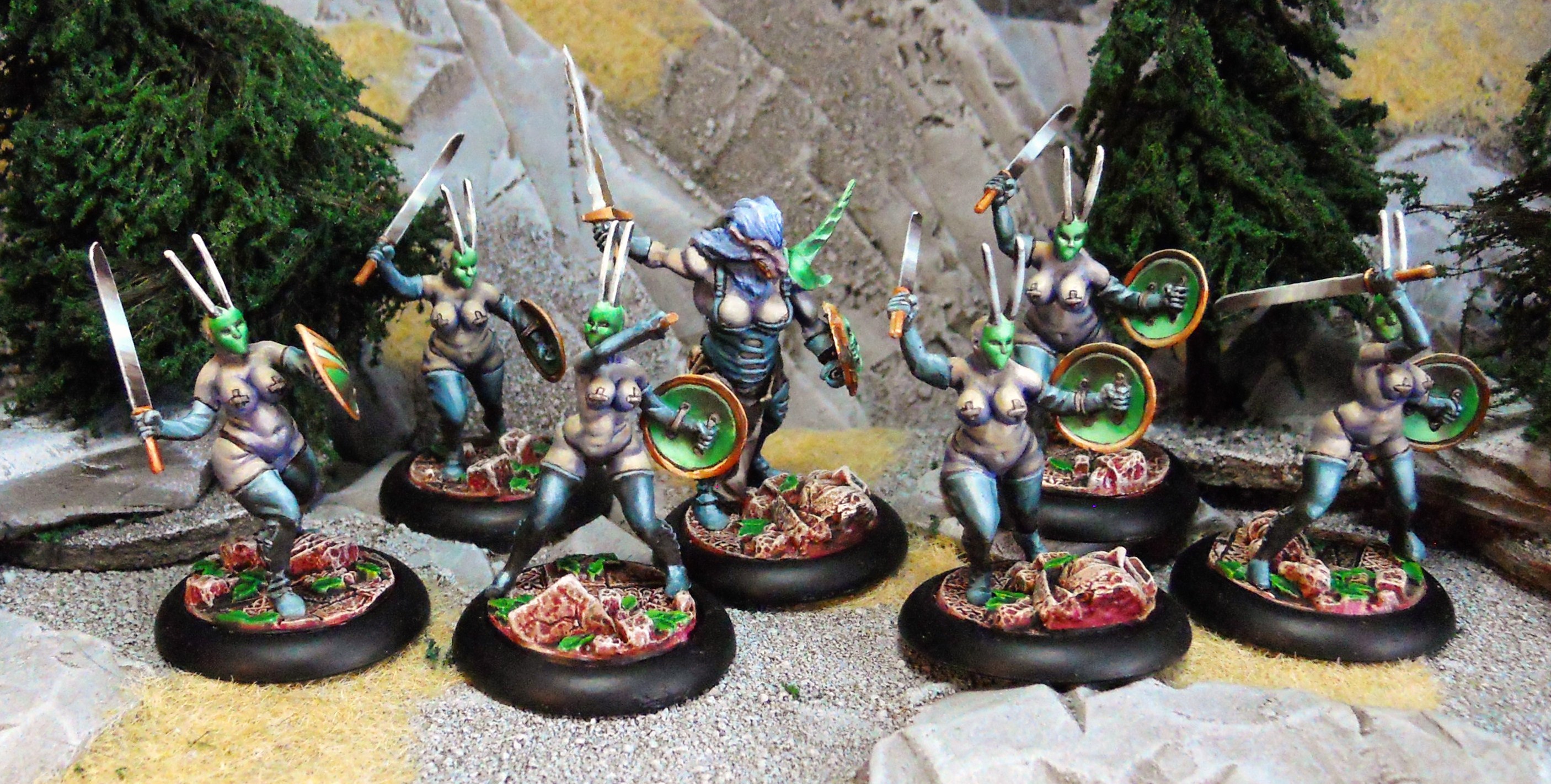 Here’s another shot at the bunch. If you hadn’t figured it out, I had planned on doing a painting article for each type of specialist, but in the end it seemed a bit redundant. If you aren’t interested in Wrath of Kings, you might find that these techniques work well on other models. In particular I think some of the new Tzeentch models could work well with this scheme. 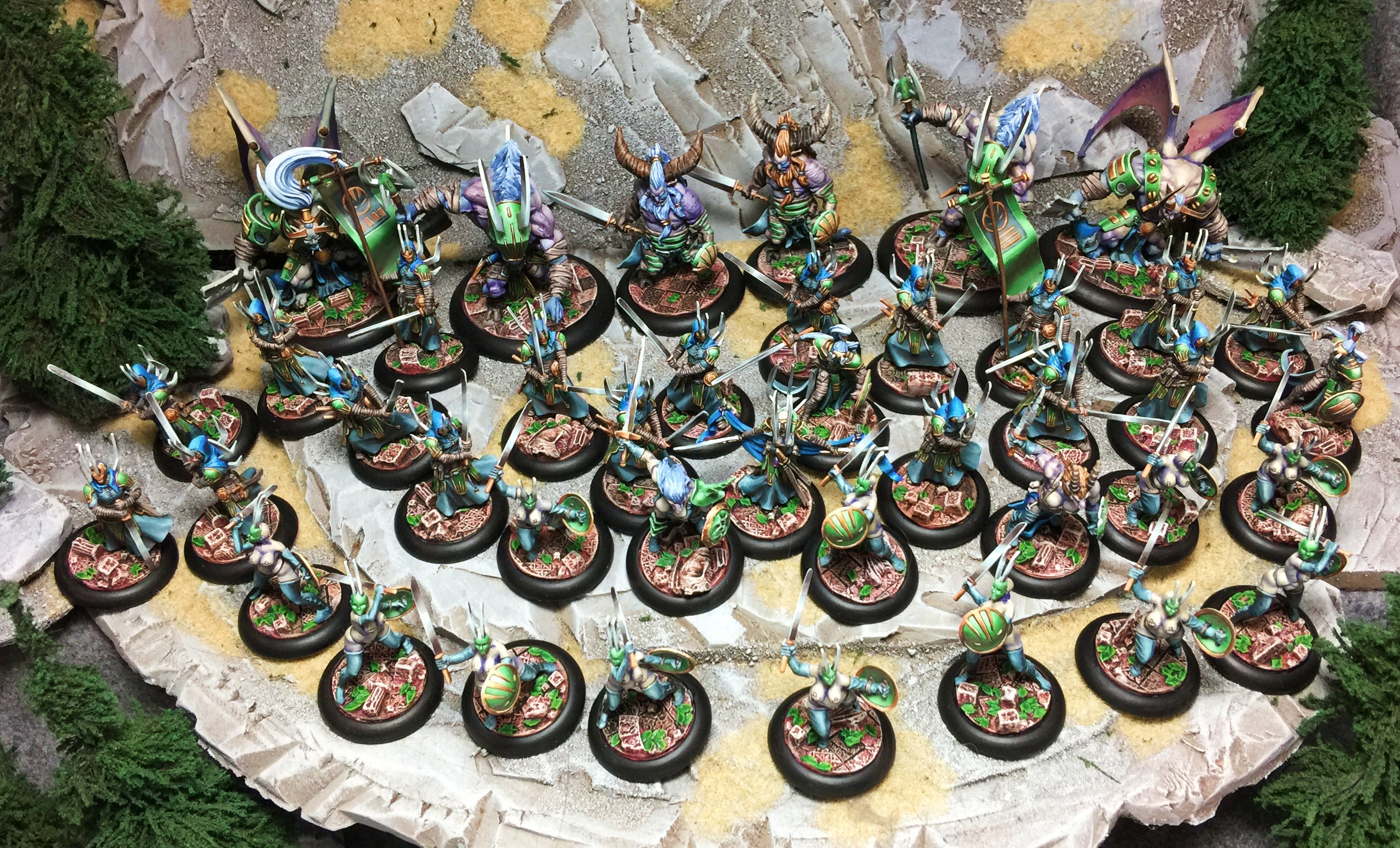 Here’s my whole Nasier force. The angle is a bit odd but it was the best I could take that showed each individual model.

~Hope you enjoyed the article. If you wanted to use this paint scheme on another line of models, which would it be? Tzeentch? Genestealer Cult? Skorne?

Author: Ben Williams
Ben Willimans is a Professional Painter and Columnist at Bell of Lost Souls. He has been involved in the hobby and art side of miniatures and the tabletop gaming industry for over 20 years. He has won multiple national painting awards.
Advertisement
CoolMiniOrNot Game Tutorial Hobby Painting Wrath of Kings
Advertisement 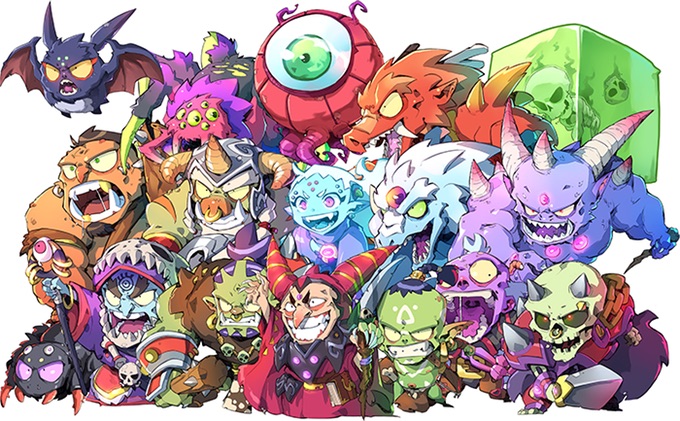