We’ve already covered the first two parts of the heralds of Ynnead. Now, Games Workshop pulls the covers off the final video for the Aeldari’s Triumvirate and it’s all about the new Avatar of Ynnead!

Also Spoiler Alert – this video talks about events that we know are coming but aren’t available yet. If you want to save the surprise for when you get the book in your hands come back later.

Here is our third and final spotlight video focusing on the new heroes of the Eldar, in which we explore the background and rules of the Yncarne, Avatar of Ynnead the newborn god of the dead.

Looking at the Yncarne model, it’s clear that this is a powerful character – a daemonic entity wrapped in a swirling vortex of soul-power – this thing looks ready to take on the mightiest foes that the 41st Millennium can throw at it.

The Avatar of Ynnead is the leader of the reborn Aeldari forces. As Phil Kelly says, “…it’s summoned by death, it is of death” and its a force to be reckoned with! Ruleswise, it’s got some pretty funky abilities. First off, it doesn’t deploy normally – when something dies (I’m guessing an entire unit) you can “summon” the Avatar via deepstrike. And it can apparently do that multiple times! It can also heal over the course of the game as well – just like the other two members of the Triumvirate of Ynnead.

There are lots more tidbits of info about how all three of them (Yvraine, The Visarch and The Yncarne) work together to boost themselves and their army. You can hear it direct from Phil Kelly starting at 2:27. 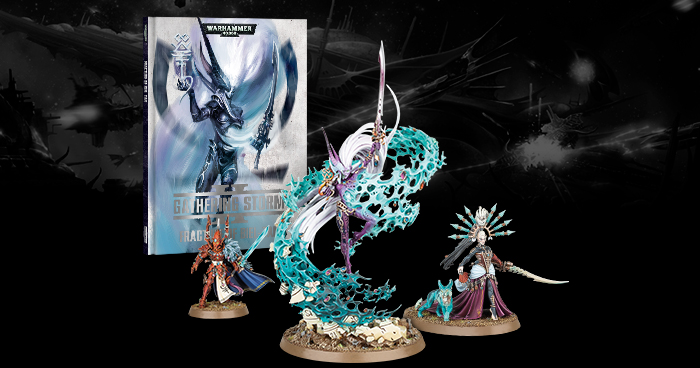 Are you ready…for DEATH!?

Author: Adam Harrison
Writer, Editor, Texas Native, and Austinite for 15+ years, Adam covers all things Tabletop Gaming. Which includes Warhammer 40,000, Age of Sigmar, D&D, Board Games and everything else that involves dice, boards, cards and a table. A hobbyist, player, and collector of miniatures and games, Adam's current obsession are his Death Armies for Age of Sigmar, his Blood Angels and Tyranids for 40k, and his ever growing Arkham Horror: The Card Game Collection.
Advertisement
Eldar Games Workshop Rules Tabletop News Videos Warhammer 40k Warhammer TV
Advertisement