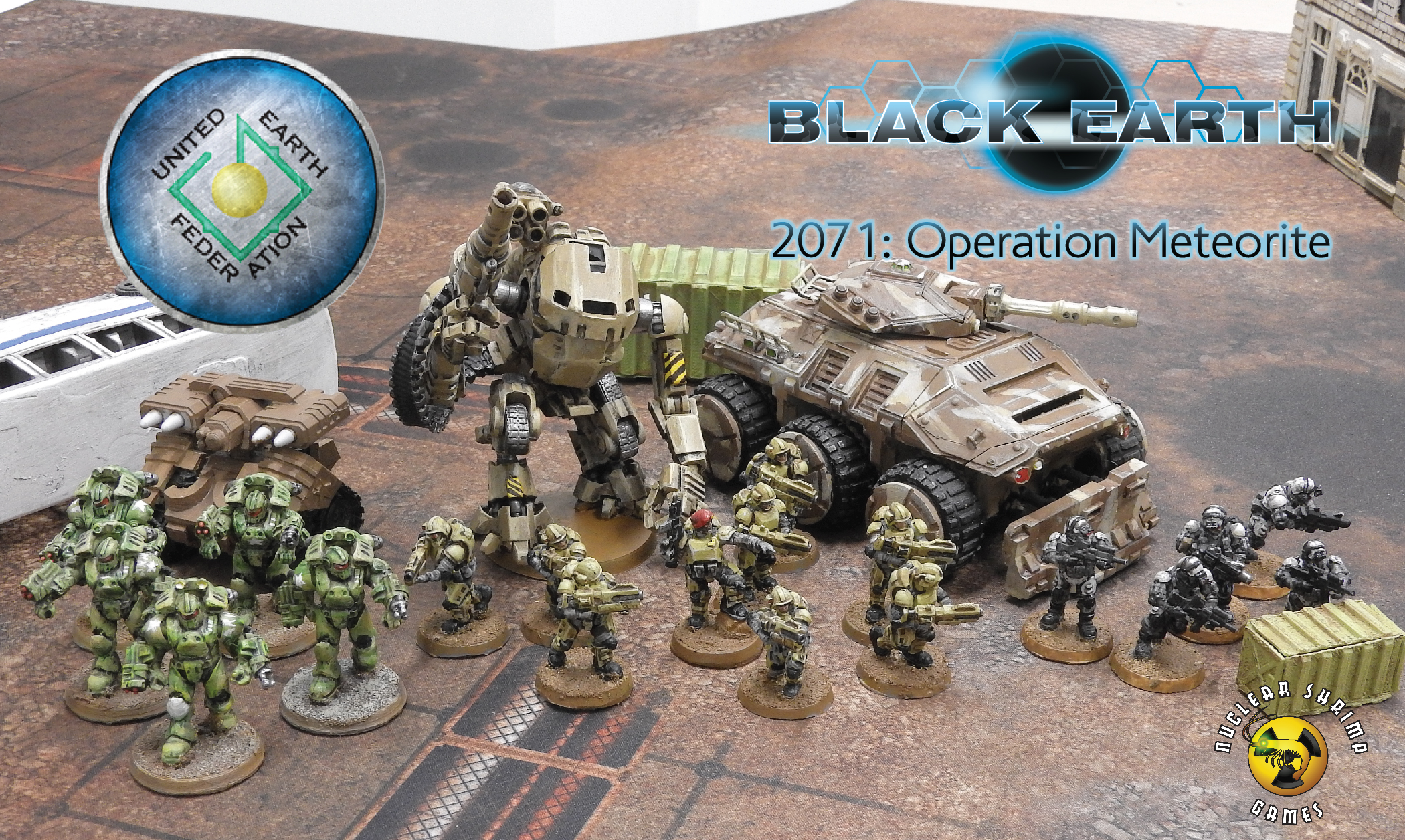 A new tactical wargame from Nuclear Shrimp Games is coming to IndieGoGo!

Coming next month to IndieGoGo from Nuclear Shrimp Games…

– Black Earth is a fast paced squad based tactical miniature wargame. The game introduces a revolutionary rules system which attempts to simulate real time in an abstract manner and brings a level of realism never before seen in a turn based strategy game.

“Instituted in 2035 after a series of economic meltdowns, the United Earth Federation consists almost of the entirety of the nations on earth. The few nations that do not take part in the UEF were either cut off because they did not fulfill the minimum standards of the federation or because they themselves stoically refused to take part in what seemed to some as the dreaded ‘New World Order’. The UEF is in essence a supernation living under a democratic free market economy which maintains a professional army with a presence all across the globe.” “This new species of the Homo genus first made its appearance in the early 2060’s. The Homo Inhumanum are a savage, aggressive and incredibly strong race of hominids that sprawled out of the irradiated old cities. The Brutes, as they have come to be called, seem to only be interested in violence and for the few years they have been active they have caused enough problems worldwide that the UEF was forced to mobilize troops for a bold campaign to erradicate them. The Homo Inhumanum have been hypothesized to be a product of a combination of reproductive issolation and rapid mutation all thanks to the thousands of nuclear warheads that decimated the largest cities in the world in 2045.” “The Tecton Order is led by a group of 12 people who have come to be known as the ’12 Unmasked’. The group’s existence was first made public in 2049 and it consists of the richest and most powerful people on the planet. The group’s agenda is to act as the benevolent and all knowing despot of mankind. When the Tecton Order first made its appearance relations with the UEF quickly broke down and escalated into a short but bloody military conflict. The Tecton Order maintains superior technology but most importantly has a pragmatic and cynical approach which allows them to have no qualms in using bioengineering on its agents that would be unthinkable in the context of a parliamentary government. ” The game rules will be available for free online soon, and there will even be printouts and ready 3d printable scenery to allow players to easily get into the game.

More info on the World of Black Earth Here

Author: Mars Garrett
Pop culture staff writer that has been on the BoLS team since 2010. Contributor on the One of Us podcast. Marvel, Vertigo, and dystopian sci-fi fan. Enjoys bad movies, amazing stunt performances, and the internet. Hates rom-coms. (she/they)
Advertisement
Kickstarter Miniatures Sci-fi
Advertisement

Wyrd: The Other Side Kickstarter Concludes