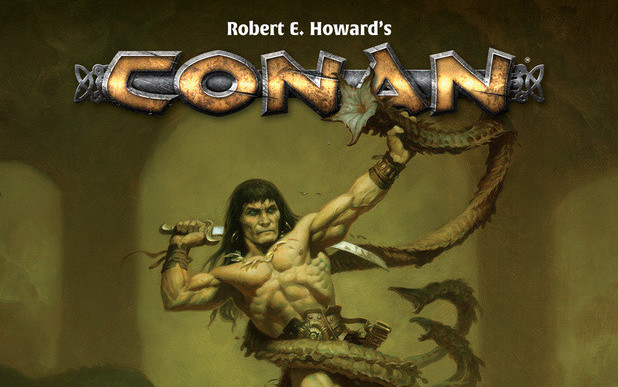 There’s a new Conan RPG available, by Crom. Conan, Adventures in an Age Undreamed Of launches today. Gird your loins (and little else).

Now you can take your adventures to a time between the years when the oceans drank Atlantis and the gleaming cities, and the years of the rise of the sons of Aryas, because Conan, Adventures in an Age Undreamed Of is available now from Modiphius Entertainment.

“Robert E. Howard’s Conan: Adventures in an Age Undreamed Of takes you into the world of Conan the Barbarian, where heroes raise blood-spattered swords against dire sorcery, exotic lands beckon to the daring, danger and treasure lurks in forgotten ruins, and where loathsome creatures haunt the spaces beneath the earth… as well as in the throne-rooms of mighty kingdoms!

Seek your fortune in forbidden tombs or upon blood-soaked battlefields. Cast dark and terrible spells of unimaginable power, at the price of your soul. Sail upon untamed seas to lands where no human in living memory has walked. Fight for the fate of civilization — or barbarism — on a savage frontier!” 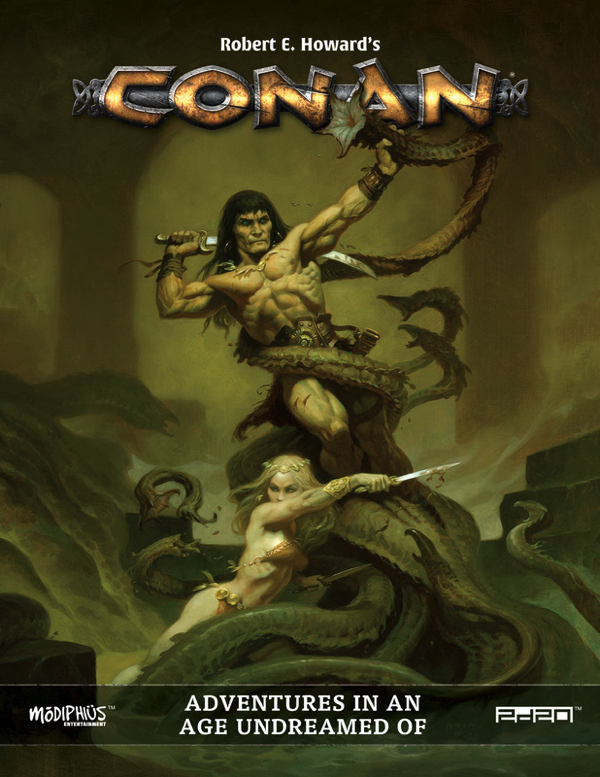 There are currently two options up for purchase, the core book and a book of pregenerated adventures entitled Jeweled Thrones of the Earth. Both are available as only .pdfs for now, but it’s worth noting that over at Modiphius’ Conan page, they’ve still got some of the big Kickstarter pledges up for grabs (I think), and a print edition due out later this Spring (at least for their backers).

Like most of Modiphius’ products, Conan, Adventures in an Age Undreamed Of uses the 2d20 system. The basic mechanic is roll 2d20, looking to roll under a target number on one or more of the dice you’re using. Your target number is set by your attribute plus skill rating, and rolling lower than your skill rating nets you an extra success.

There are various ways to modify the number of dice you roll, adding when you’re gaining a boon of some kind, subtracting as your life gets harder. Why would you want more dice, you might be wondering, having recently been hit on the head–generating more successes than you need builds momentum, which in turn lets you add additional effects to your action, whether in the form of extra damage, or a called shot or the like.

All in all, it’s a fairly crunchy system. Player characters largely distinguish themselves with traits, talents, and skills. The system can be fairly flexible, so whether your character is a thief, a reaver, or a slayer (leaving aside the size of your mirth and melancholies) you can definitely develop your character in that direction. But sometimes these details add a buffer between characters and the game.. Armor helps reduce the damage of an attack, not make it harder to hit. Weapons have a penetration value, and there are tons of little details to try and keep track of as you go.

Some of those details manifest themselves in the combat engine, which tries to build an ebb and flow of heroism and conflict with a fate-esque pool of points available to the GM to cause additional havoc in the game. These points are generated anytime you add extra dice, or achieve a critical failure (defined here as a natural 20, which, it just feels wrong to penalize rolling a natural 20), ensuring that, as players exert themselves more and more, the tides threaten to turn against them. 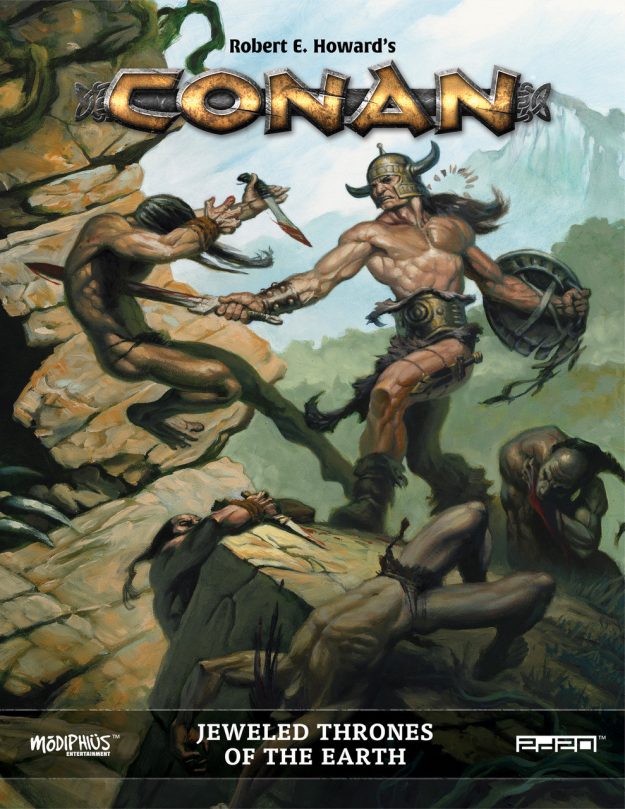 But what good are dice, compared to the hand that rolls them? Is a game not more than its core mechanic? The game promises “suitably Howardian adventures” and presumably they mean less that these adventures will have a strong undercurrent of racism, and more that the game will have savage, pulpy combat where black-haired, sullen-eyed, heroes take up swords against evil wizards, ancient gods, and myriad other foes. I’m given to assume the latter, given that they’ve got guidelines for adventures in the Hyborian Age, and have a bestiary section full of bandits, sorcerers, giant serpents, forest devils, and of course, named characters like Conan or Thoth-Amon.

They appear to have done their research though, consulting “Conan scholars” to make sure that their game really captures the world of Conan. I’ve looked over a few of their pregenerated adventures, and they definitely sound like the sorts of things you’d read in a Conan anthology:

All that’s missing is some narration about gleaming spires of alabaster, standing out bone-white against the dark sands, and you’re there, in all the leather and blood and oil of a Conan story. But, for all that, it comes down to how the fighting is going to feel. Combat can get a little clunky in 2d20–especially when players are rolling lots of dice, as the action around the table halts a little to tally up Doom Points and extra effects–but, if you can keep that dynamic bookkeeping under control, then it might be worth checking the game out. I’m especially curious to see how their magic system works itself out–but a true hero will have no need of it. After all, Conan never needed magic (except for all those times he did).

Anyway, with the release of Conan, Adventures in an Age Undreamed Of, now you and your group have something else to consider on the Tree of Woe.

Check out Conan Adventures in an Age Undreamed Of – £20.

Modiphius tried doing a supplement on how snake cults have changed through the years, but found they were Set in their ways.