The Golden Warriors of Sigmar have a new Battletome – it’s your one-stop shop for all things Stormcast Eternals!

Our friends at Dragon’s Lair Comics & Fantasy brought over the new Stormcast Eternals Battletome for this Tabletop Spotlight and it’s exactly what the doctor ordered:

This hopefully isn’t a shock to anyone but this new Battletome has everything you need for playing Stormcast Eternals. They had gotten a lot of attention spread through out the first year or so of the release of Age of Sigmar. That means they had rules for their units and battalions scattered throughout many supplements. Personally, I found this to be a bit of a headache to sort through and even though I do have access to all of the materials, it didn’t make it the best experience.

Now, with this book we’re getting a consolidated single source for ALL of the rules, warscrolls, battalions, AND points for the Stormcasts! On top of that, it’s got all the new rules for units, relics, prayers, command abilities and pretty much everything else you need. This Battletome is very much in the same vein as the Disciples of Tzeentch release as well. It’s laid out in a similar easy-to-navigate format. It’s also got a ton of extras for the different chambers of Stormcasts as well.

Overall, I think that if you’re playing a Stormcast Eternals’ force you’re going to want to pick this one up because of all the new stuff in the book. If you’re looking at starting a new force of Stormcasts then this book is the perfect launching point. I won’t even get into all the other great stuff that catches everyone up on the lore-side of things either – there is a lot…Order Battletome Stormcast Eternals is out and available right now – so what are you waiting for!? 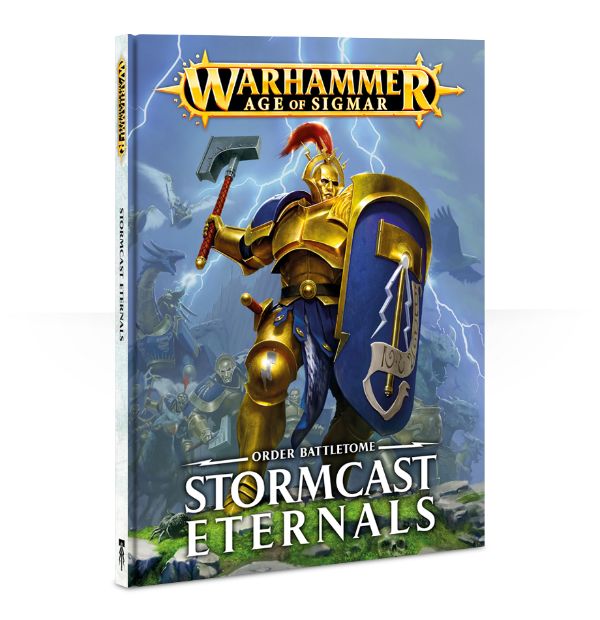 A glorious vision of golden celestial light, a living embodiment of the God-King’s might, the Stormcast Eternals are messengers of vengeance armed with the might of stars. Once-mortal champions of Order forged by Sigmar into an astonishing fighting force, hurled down from the heavens to meet the forces of Chaos head-on, they wreak bloody revenge on the Dark Gods, the corruptors of the realms. Following the brutal battles of the All-gates, the Stormcast Eternals lead the forces of Order in reclaiming the lands of the Mortal Realms, leveraging the power of the heavens to smite the corruptions of Chaos that plague these territories.

Author: Adam Harrison
Writer, Editor, Texas Native, and Austinite for 15+ years, Adam covers all things Tabletop Gaming. Which includes Warhammer 40,000, Age of Sigmar, D&D, Board Games and everything else that involves dice, boards, cards and a table. A hobbyist, player, and collector of miniatures and games, Adam's current obsession are his Death Armies for Age of Sigmar, his Blood Angels and Tyranids for 40k, and his ever growing Arkham Horror: The Card Game Collection.
Advertisement
Age of Sigmar Games Workshop Rules Tabletop Spotlight Videos
Advertisement