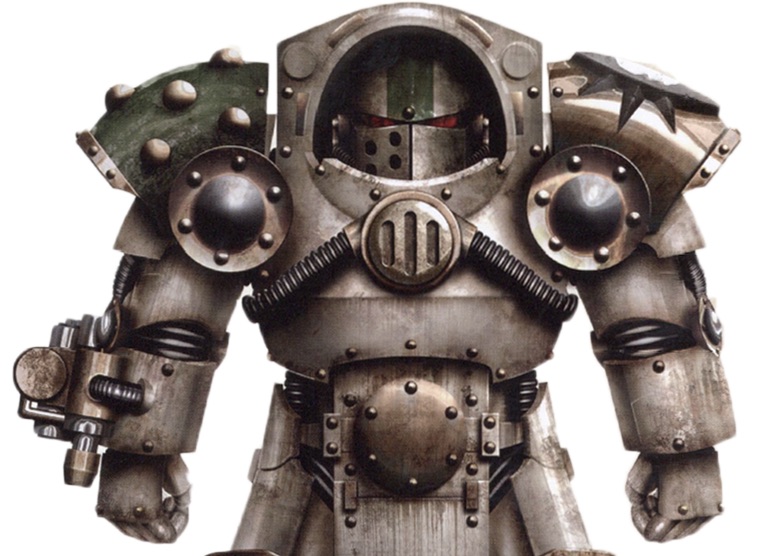 The Death Guard are a heretical chapter who may be rearing their ugly heads soon. Be ready, Loremasters… 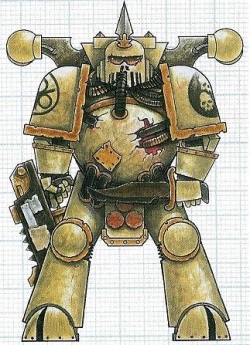 The Death Guard, formerly known as the Dusk Raiders, were the XIV Legion of the original twenty Space Marine Legions. Their Primarch is Mortarion, who relocated their base to his homeworld of Barbarus after his discovery by the Emperor. During the Horus Heresy, Mortarion and the majority of the Legion swore allegiance to Horus, becoming one of the nine Traitor Legions who betrayed the Emperor. After Barbarus was destroyed during the Heresy, they relocated to the Plague Planet inside the Eye of Terror.

Because of Barbarus’s toxic environment, the Death Guard took great pride in their resistance to poisons, disease, and mortality in general. This fascination led them to worship the Chaos GodNurgle and in return he infests their armour with pestilence and disease, and elevated Mortarion to a Daemon Prince.

The base gene-seed stock of the Dusk Raiders, originally known as the XIVth Legion, came from Terra or more specifically the warlike and tough clans of Albia. In the Unification Wars the XIVth Legion quickly developed the use of tactics and methods of warfare that their ironside fore-bearers would have found familiar. Operating in the role of heavy infantry, they were experts at survival, endurance, and stubborn defense. Their grey Power Armour began to carry battle decorations as well as the modified imagery of Albia. As the Unification Wars came to an end and the Great Crusade began, the Emperor gave them the title of the Dusk Raiders, a nod to their use of the ancient Albian tactic of conducting major ground attacks at twilight when the shift of light confused an enemy’s watch and gathering shadow would advance across open ground.

During the Great Crusade

When Mortarion was found by the Emperor upon the troubled world of Barbarus, he was swiftly given control of his Legion. Upon first seeing them he told them, “You are my unbroken blades. You are the Death Guard.” The Legion’s name was then changed in accordance with this decree, and Mortarion’s words engraved above the airlock door of the Battle Barge Reaper’s Scythe in honour of the moment. Mortarion based the new Death Guard on his armored toxin-resistant fighters of the same name that had fought beside him on Barbarus. Their armour’s colour was changed, and whilst their main armour remained unpainted, the trim colour became dark green. Mortarion’s veterans of Barbarus formed the core of his new Legion. 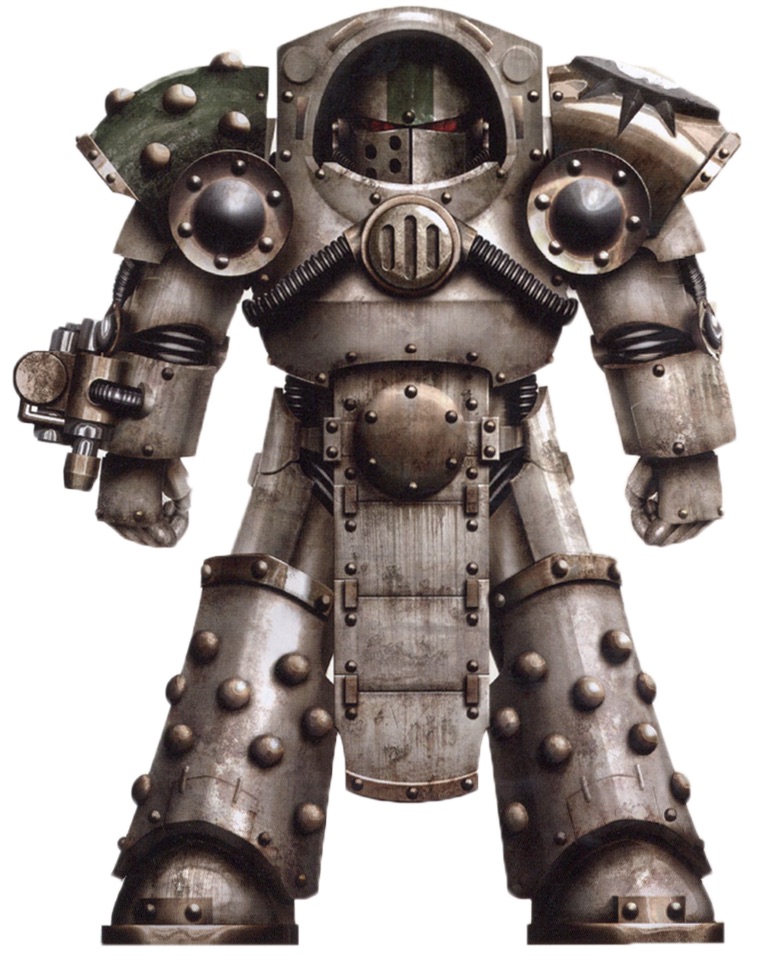 The Death Guard tended to be organised into units of foot-slogging infantry, rather than mechanised squads. Mortarion ensured that his men were well-equipped and highly-trained. He also ensured that they could fight in almost any kind of atmosphere, and placed little emphasis on specialised units using jump packs or bikes. The Death Guard did not have dedicated Assault and Tactical Squads. Every Marine was equipped with a bolter, bolt pistol and close combat weapon and told to fight with whatever weapon circumstance dictated. The Legion was also well known for its use of Terminator Armour. Possibly as a result of this, the Death Guard were highly successful at high-risk boarding and close-quarter operations such as space hulk clearance.

At the beginning of the Horus Heresy, many Death Guard who remained loyal to the Emperor were massacred on Isstvan III by their fellow Space Marines, including Captain Ullis Temeter. Roughly a third of the Legion was still loyal to the Emperor. Shortly after, they battled Imperial forces in the Drop Site Massacre.

During the Horus Heresy, the Death Guard joined Warmaster Horus in many battles and raids on the Imperium. The Lord of Death split his fleet, commanding one himself and Calas Typhon the other. Mortarion’s smaller fleet led a failed attempt on Prospero to convince Jaghatai Khan and the White Scars to join with them, and the Mortarion found himself in combat with the Great Khan. After the White Scars managed to abandon the Death Guard fleet, Mortarion had his Legion embark on a spiteful purge of the Prospero System. Mortarion then fought alongside Horus in the Battle of Dwell and Battle of Molech before rejoining Typhon’s main fleet, which had been waging a campaign of misdirection and misery against the Dark Angels since the Battle of Perditus. Later, Horus himself tasked Mortarion with finding and destroying the White Scars. Eager to settle the score with the Great Khan, the Death Guard and Emperor’s Children allies under Eidolon cornered the Scars at the Dark Glass, but failed to destroy them in the Battle of Catallus. Angered, Mortarion realized that his divided legion was hampering his war effort and ordered Eidolon to find Typhon and his splinter fleet. 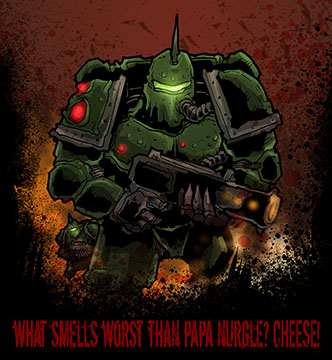 When the Death Guard’s fleet embarked for Terra Typhon killed the Navigators, whom he alleged remained loyal to the Emperor, and assured his Primarch that he could lead the fleet to Terra without their help. Instead, he led them into a trap – becalming the Death Guard fleet in the warp, adrift, helpless and at the mercy of Chaos. Then came the Destroyer Plagueand the Death Guard were struck down, but Typhon received his reward from “Grandfather Nurgle” and he absorbed the full power of the plague. His body became home to the flies of Nurgle, his armour a hive of pestilence. He then became Typhus, Herald of Nurgle and the Host of the Destroyer Hive.

After Horus’ defeat, Mortarion led his Death Guard in a campaign of destruction over a score of planets, until finally retreating into the Eye of Terror. Here he received Nurgle’s ultimate reward and became a full-fledged Daemon Prince, ruling over one of Nurgle’s greatest Plague Worlds in the Eye of Terror. Mortarion sends out fleets of Plague Ships into the Warp to carry their contagions throughout the galaxy. Concerned himself with matters of the Warp more and more, Mortarion has periodically returned to lead his Legion but in his absence it has largely splintered into many smaller warbands

During the Great Crusade-era after the discovery of Mortarion, the Death Guard Legion was based on their Primarch‘s army of the same name on Barbarus. The Legion was divided into seven Great Company’s, each of which consisted of smaller Companies. Each of the Companies had its own honorific titles based on the Barbaran tradition. The commander of the 1st Company. The captain of the 2nd Company was known as “Commander” while the leader of the 7th was known as “Battle-Captain”. 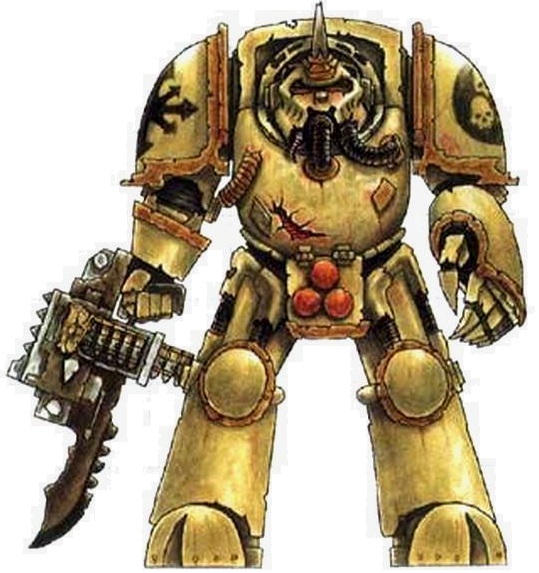 A modern Death Guard force is largely made up of Plague Marines, and still follows the doctrines that their Primarch Mortarion taught them. Their tactics are based on the use of foot-slogging infantry, and the hardy use of their Bolters. Any vehicles that were in possession of the Death Guard at the time of the Horus Heresy have since fallen into disrepair, or have been commandeered by cheeky Nurglings. The Death Guard make full use of Nurgle’s gifts, spreading turmoil, advancing solidly amidst a mist of choking disease, surrounded by Nurglings at their feet and summoning horrific Plaguebearers from the Warp. In larger battles where the outcome is of dire importance, a decaying Daemon Prince may take the reigns of the army, or a Great Unclean One may posses a Champion.

The Death Guard often organizes squads by multiples of seven, based on the sacred number of Nurgle.

Long have these marines been a plague on the Imperium. Be wary, Loremasters, be wary. 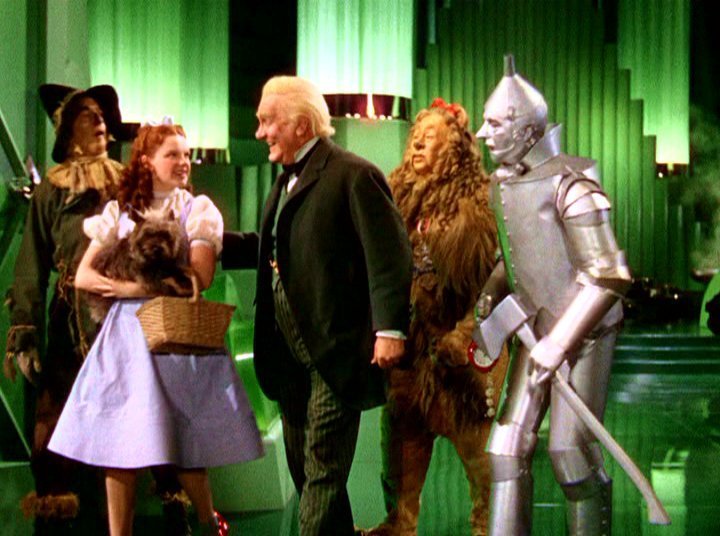