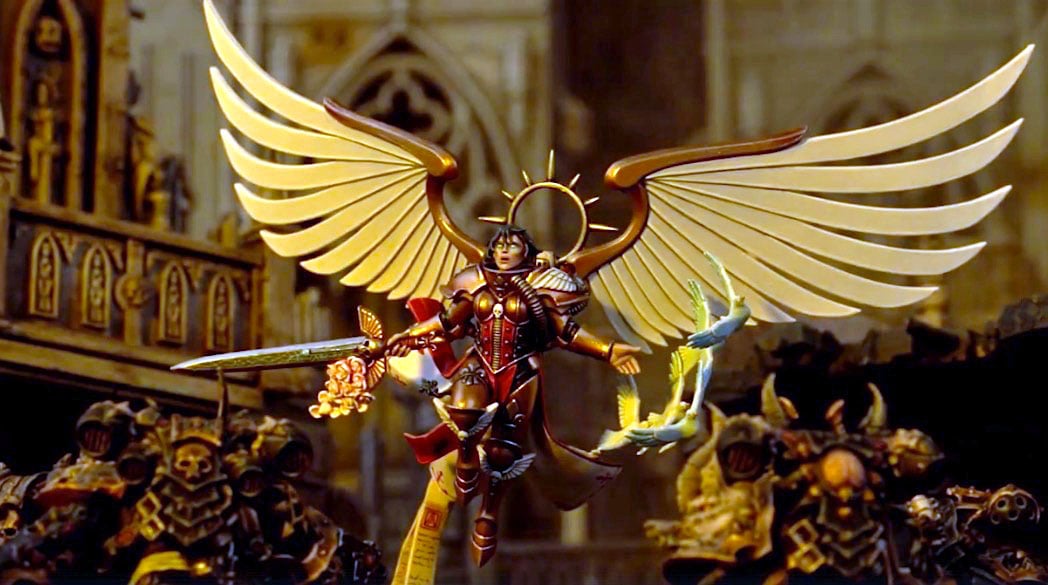 Hi everyone, Michael Corr here with a review of the new Relics available from the Fall of Cadia book.

The new Gathering Storm: Fall of Cadia book has brought some great new formations and special characters to the tabletop for Imperium players. In addition, two brand new sets of Relics have been detailed for inclusion in Armies of the Imperium that can add a lot to your army lists.

These new Relics are available to any character/model that can normally take a Relic from their respective codices if the character is taken as part of one of the new formations detailed in Fall of Cadia. Alternatively, any army that includes Belisarius Cawl can take Relics from the Arcana Mechanicum, orany army that includes Saint Celestine can take Relics from the Eccleshiarchy  Relics. Given how good these formations and characters are, this is not much of a tax to pay to gain access to these new Relics.

Numinasta’s Casket of Electromancy– This is an assault weapon that hits all units (including flying models) within 2D6″ with a S3 AP- haywire attack. At 30 pts, I think this is too expensive for a one use only weapon with the profile that it his. I think that this is intended to primarily target vehicles, as a S3 hit with no AP value is not going to worry most units in the game. Even against vehicles, most of the time you will be doing a single glancing hit. Nice to finish off a damage vehicle, but unlikely to destroy one or cause serious harm most of the time. The random range does not help as well. I would probably give this one a miss in most lists.

Quantum Annihilator– An 18″ Strength 2D6 AP2 Assault D3 gun that is instant death on an 11 or 12 (or causes an automatic penetrating hit). This is pretty decent for your character, but I think I would rather take three Meltaguns (the same cost) for the guaranteed 3 shots and reasonable strength, though you don’t get the range. Could be useful, as on average, you are looking at S7 and AP2. A good Marine killer, but there are more cost effective options available to many Imperial armies.

Sacrifactum Autorepulsor– Any unit attempting to charge the bearer and his unit suffer -2 to charge roll. At only 15 points, this is a bargain of a Relic and one of the best on the list. The penalty stacks with other charge penalites, so stick this in a unit in cover and that is -4 to charge for most units in the game. At any sort of reasonable charge distance, -4 to your roll is a significant penalty and will result in a lot of failed charges. This gets even better when you factor in Mysterious Objectives. Given that the Mechanicus have wargear/rules allowing them to choose the option for Mysterious Objectives, it will be easy for them to get a Grav Wave Generator. If holding an objective in cover, that will be -6 to the enemy charge. That means that an enemy unit right on top of you (1″ away) will still fail their charge 50% of the time. This is a great Relic for a gunline army or a backfield unit holding an objective in cover. Even if you put it in a mobile unit, it increases the odds of an opponent failing a charge, which is a nice result anyway.

Memento-Morispex– This allows you to grant a unit the Bearer is in a selected special rule each of your turns; Tank Hunter, Monster Hunter, Skyfire, Cognis Weapons (fire overwatch at BS2, Wall of Death weapons get automatic 3 shots in overwatch). This could be a potent Relic given the right weapons in a unit. Skyfire is nice, allowing you the chance to take on enemy flyers if your list is particularly vulnerable to these types of unit. Tank Hunter and Monster Hunter are great for taking on their respective targets, and ensuring that you don’t fluff your Meltagun/Multi-melta shots. Cognis Weapons could also be a nice bonus in certain situations if your unit is armed with Flamer Weapons (or pretty potent when combined with Deathwatch Frag Cannons).

Omnissiah’s Grace– Provides the Bearer with a 6+ invulnerable save or +1 to their invulnerable save (up to 3+, thankfully). For only 10 pts, this is a great Relic to add to a character with a 4+ invulnerable save if you don’t want to take a Storm Shield and prefer to arm them with 2 combat weapons for the additional attack. I am glad this is capped at 3+, or else there would be a ton of 2+ invulnerable tanking characters running around in Deathstars at tournaments.

Saint Curia’s Autopurger– Enemy models charging the bearer don’t receive their bonus attack for charging. In addition, all models locked in combat with the bearer must take a toughness test at the initiative 10 step. The unit takes a wound for each model that fails its test (saves allowed). This is a pretty awesome Relic too. Against horde units or armies (such as Guard, Orks, Renegades or certain Daemons), this has the potential to cause a lot of damage in combat. You may even get lucky and take out a few MEQs before they get the chance to attack.

Some very nice Relics in the Arcana Mechanicum. For me, the Sactrifactum Autorepulsor is the winner of the bunch. The ability to severely hinder enemy charges is a great bonus to many armies of the Imperium.

Skull of Petronella the Pious– Gives the Bearer and all models in their unit a 6+ invulnerable save. At 30 pts, I think this is too expensive for what it does. Could be useful in a large blob of Guardsmen, but otherwise I would tend to give it a miss. Pity it does not stack with other invulnerable saves, though that would perhaps be a little too powerful.

Blade of the Worthy– A melee weapon with two different profiles. If you pass a Ld test, it is +2S and AP2. If you fail, it is S User and AP3. For twice the price of a standard Power Weapon, I think that this is great. Odds are you will be putting it on a Ld 9 or 10 character, so the odds of passing the Ld test are quite good. On a standard character, you will be striking at strength 6 and AP2 at initiative. This is going to make a mess of Marine equivalents and a lot of units in the game.

Castigator– This is essentially an AP2 Bolt Pistol that does not allow invulnerable saves to be taken against it. This could have its uses in a number of situations.; taking wounds off of characters before you charge them or killing Terminators. It could be useful against Daemons in the open, but it is still only one shot, so is going to take a while to go through a unit.

The Font of Fury– This is a one use only, assault 1, Large Blast weapon that is poisoned 4+. It goes up to poisoned 2+ against units from the Chaos Codices (Daemons, Space Marines and KDK). Could be useful for causing massed wounds on a unit, but the lack of an AP is a problem, as is the short range (8″), more risk of scattering back on your own unit. Not bad for only 10 pts, but not great either.

Shroud of the Anti-Martyr– Gives the bearer Eternal Warrior. This is a decent Relic if you don’t wish to (or can’t) take the Shield Eternal. Will be useful for your Warlord to help keep them alive and make them harder to kill. I can see a lot of uses for this in an Imperial army and it is not too expensive to be worth taking.

Wow. For only 35 pts, this is amazing! This has the potential to completely shut down certain alpha-strike army builds, ensuring that the enemy units will have a hard time getting into Melta or rapid fire range. The fact that they automatically mishap if they come close is awesome. You have a 1 in 6 chance of destroying an enemy unit and a 1 in 3 chance of putting them in a terrible position. Even just delaying a unit for another turn can be game winning in certain situatiosn. Imagine, getting to place the enemy Drop Pod in the corner of the table, far away from the objective and well out of meltagun range or grav cannon range. This could be a game winning Relic against a number of armies.

I can see this being used in combination with a couple of Landspeeder Storms. Set the Landspeeders up 12″ away from the Relic bearer on each side. That generates a 4 foot line where Deep striking units either cannot attempt to deep strike or scatter 4D6″ when they do scatter. That is going to create some deployment nightmares for a Drop Pod army. On top of that, you get the bonus of a 4+ invulnerable save, so the Relic is not a complete waste if the enemy army has no deep striking units. Could be useful for characters that cannot access an invulnerable, such as Space Marine Librarians on a Bike or on foot.

I think the Holy Circle is the clear winner in the Eccleshiarchy  Relics, at least for me. The Blade of the Worthy is a close second. Striking at increased strength with AP2 at initiative in combat is brilliant, something that very few characters in the game can achieve.

~So over to you. Which Relic(s) stand out to you as the best options. Are there any tactics that you are formulating using them at the moment?

Author: Pablo Martinez
Warhammer 40k analyst, tournament reporter and Ultramarines enthusiast, I'm the man behind the 40K podcast: Signals From the Frontline. I seek to gather more knowledge about the Warhammer 40k and share it to unite both hobbyists and gamers. I began writing for BoLS in 2016.
Advertisement
Adeptus Mechanicus Rules Sisters of Battle - Adepta Sororitas Tactics Warhammer 40k
Advertisement