Check out two classic monsters, now updated to 5th Edition rules, in another preview from the upcoming Tales from the Yawning Portal…

Wizards has just previewed two of the monsters you’ll face in the adventures featured in Tales from the Yawning Portal: Kalka-Kylla, a conversational crustacean from The Hidden Shrine of Tamoachan, and the Kelpie, a sinister seaweed siren, situated in White Plume Mountain’s underground water-dungeons. A disproportionately high number of aquatic K-monsters in Yawning Portal, it seems.

At any rate, let’s take a look at each of them, compared with their 1st Edition counterparts!

Pronounced Kal’-ka key’-ya, this is a massive hermit crab that inhabits one of the first rooms in the halls of the Hidden Shrine of Tamoachan. When first encountered by adventurers, Kalka Kylla is asleep in a room guarded by a crayfish:

This room is constructed of large stone blocks, buttressed in the corners. The Walls are wet and slimy and mud covers most of the floor in a thin coating. In the center of the chamber there sits a large polished boulder amid a pile of smaller rounded rocks. The boulder is 5′ tall and colored brown with dark streaks and spots. Leaning against it is what appears to be a bamboo staff. When the room is entered, another door may be discerned in the shadow of the boulder across the apartment. In the mud around the base of the boulder may be seen a small moving shape, a crayfish.

The boulder is actually Kalka Kylla’s shell, and the bamboo staff one of its legs. It is asleep and won’t respond unless awakened or attacked. The crayfish will admonish the party as they approach–and if they ignore its warnings, the crayfish will wake up the hermit crab and I’m not making any of this up.

Here’s a look at Kalka Kylla as appearing in the original module, where he is described as a wily opponent who drags his shell around for protection and to try and pin opponents:

Kalk Kylla can also pin opponents against the wall by by getting its shell on the other side of an opponent within 5′ of a wall and making an attack roll which would then pin a character to the wall, leaving them unable to move or attack until the crab quit pushing.

Kalka Kylla could also use his legs to trip opponets or pull them to his mouth to be bitten, but this came at the cost of not moving.

Now here’s what they have to say about Kalka Kylla in the preview section from Tales from the Yawning Portal:

Adventurers who get inside the halls of the Hidden Shrine of Tamoachan are likely to nd a unique oppor- tunity—the chance to communicate with a crustacean that can speak. If Kalka-Kylla is coaxed out of its hiding place and not attacked, it might provide visitors with a bit or two of possibly useful information.

Interesting, because in the original adventure, Kalka Kylla denies having any knowledge of the shrine, having been brought there when he was young. Though, if you take a look at his updated stats, you’ll note that he has a 15 intelligence, which is a nice nod to the original description of Kalka Kylla being “highly intelligent in order to better serve its master, Camazotz or Zotzilaha, the vampire god to whom the shrine was originally dedicated.” 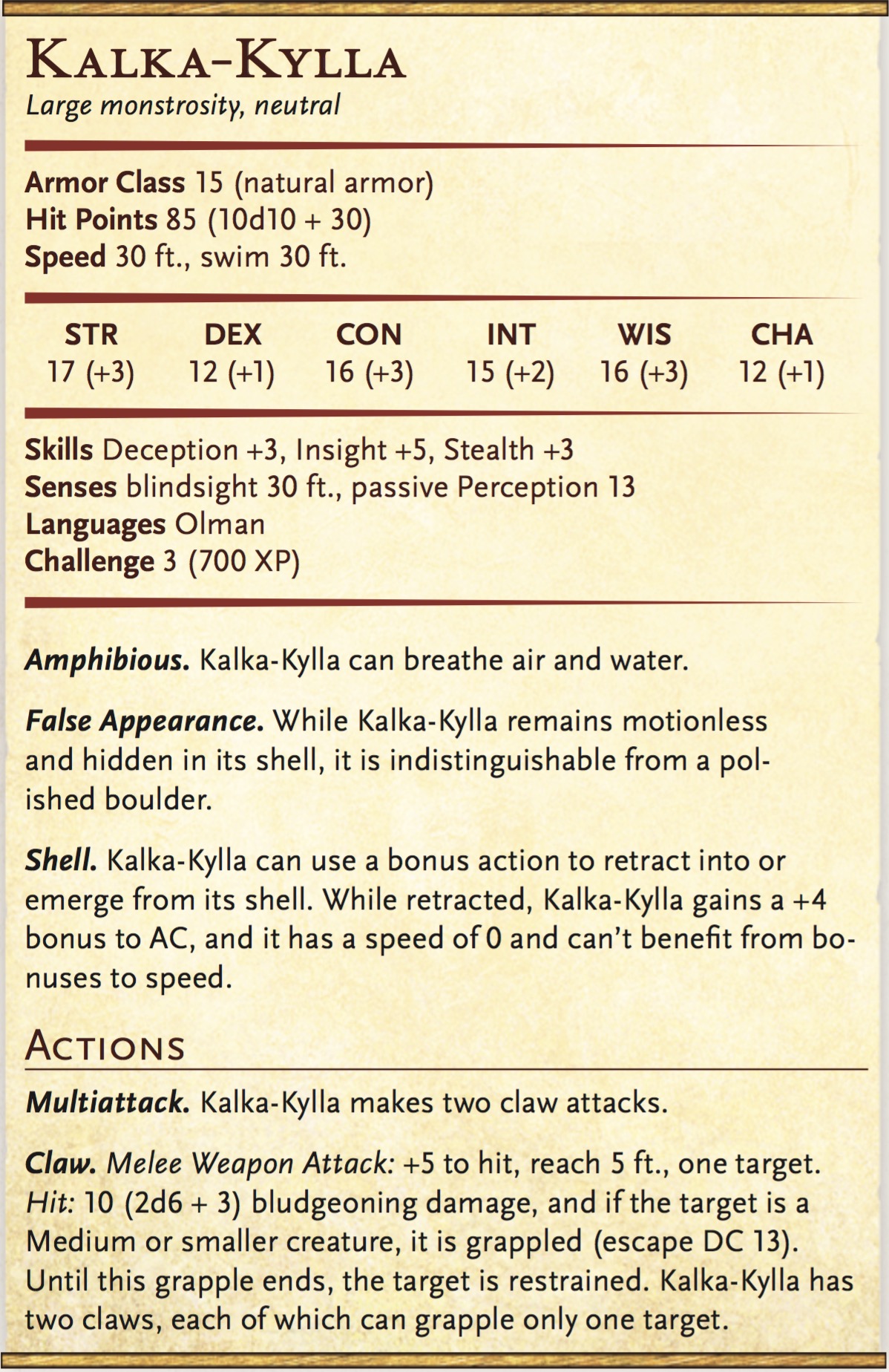 As you can see, they’ve kept the core of the monster pretty intact. We talked about the intelligence above, but the False Appearance and the higher AC of its shell are a really neat reimagining of those original rules. They even kept the “pinning” idea, though it’s not with the shell, but rather its pincers.

Even though the abilities are different, this still feels like the original Kalka Kylla, which I think is very important. This doesn’t feel like a bad console port of a video game, but rather like someone’s taken the time to really figure out what’s going on and translate it as best as possible–which makes me very hopeful to see how they handle the module itself.

The Kelpie is an evil plant that resembles a pile of wet seaweed but that, when active, can shape its body into any form it chooses. 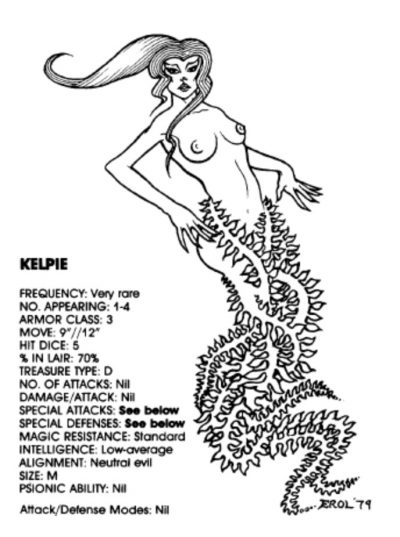 So of course it uses this ability to appear like a beautiful humanoid and try to lure other people to their doom. What did you expect, this is D&D after all. What strikes me as hilarious though, is that though it can change its shape, it can’t really change its substance:

Though the form may be changed, the substance still resembles green seaweed, and the effect is somewhat grotesque. To counter this, the Kelpie can throw on powerful charm spell per day.

And if the target didn’t save, they would willingly hurl themselves into the Kelpies gross, sea-weedy arms–which just think about what it feels like if you’ve ever been swimming and gotten the really slimy seaweed (or algae) on you, now imagine that but all over your body. You’re welcome. And once ensnared, the Kelpie drags their hapless victim to a drowning doom made easier by the fact that the victim would try to breathe water (because of the charm? I guess?) which meant taking 2d10 points of damage per round until they either found air or died.

In the original adventure there were a pair of Kelpies lurked in a pool in a moist, muck-covered room that may well be the first room you came to in the dungeon, depending on if you went left, right, or straight. So just a nice, slimy way to introduce the dungeon. On the plus side, they guarded a suit of +3 Chainmail.

Anyway, let’s take a look at how their modern counterparts:

I have to say–this is another faithful adaptation of the original. They kept all the classic stuff: resistance to fire, body made of seaweed, drowning hypnosis that makes you actively try to kill yourself if you are underwater (and, it’s worth noting, attacks by the Kelpie don’t grant you a saving throw from the Kelpie’s attacks–you’re delighted to be in its embrace)–and then they go a little further. The Kelpie is resistant to bludgeoning and piercing damage and now has a codified false appearance, and in many ways appears pretty nasty. That drowning hypnosis is mean, especially if there are other enemies in the room with it–hypnotized targets don’t avoid damaging terrain or opportunity attacks.

Wizards is really on fire here guys (and only taking half damage). These monsters really capture the feel of the classics without being slaves to them. Their hit points and stuff have been adjusted to fit, and the rules are way more in line with 5th’s edition narrative mechanics style of getting things done. I like it. I’m curious to see how 5th Edition’s narrative philosophy applies to the dungeons themselves. Both for the older ones, but also for the 3.x edition adventures as well, because that’s when they started moving in that direction, and it feels like they’ve come a long way since the Sunless Citadel.

At any rate, be sure to stay tuned for more Yawning Portal coverage. We’ll be running through the classic modules as well, in the meantime.