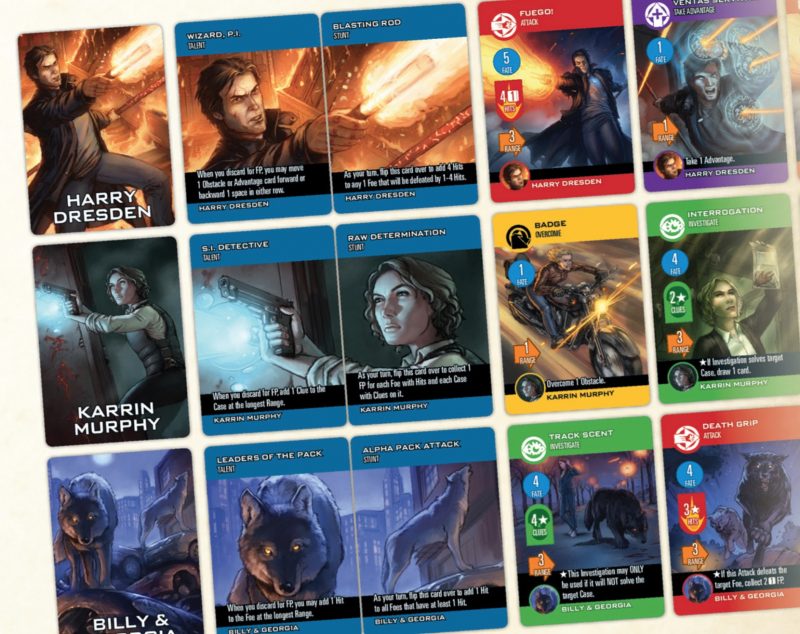 The Dresden Files is getting a new Cooperative Card Game – come take a look at it under the Tabletop Spotlight!

Our friends at Dragon’s Lair Comics & Fantasy brought over The Dresden Files Cooperative Card Game – another Kickstarter success story. It’s being shipped out to stores all over right now and if your FLGS got in on it, then they should be getting their order soon. For now, let’s look in the box:

This game is based on a pretty fun concept – it’s a “what if” scenario. As in “What if Harry had to go through the first five novels, but this time he had the help of some extra allies.” Having read all the books in the series, it was really hard for me not to nerd out a bit when I found out about this game. The good news is that this game didn’t just nail the concept and the winks to the fans, they also made the game accessible to folks who have never heard of Harry Dresden.

Another good thing about this game is that the game play is pretty easy to pick-up on. We touch on the rules in the video but if you’re curious you can read the full rules HERE. It’s got an interesting Fate Pool mechanic that you can spend to use cards or you can refill it by discarding cards. You’re also trying to solve cases and overcome obstacles. Some of these are physical challenges, other just require you to generate enough investigation tokens to defeat the challenge. It feels like a good “game play” loop – and you can adjust the difficulty up or down by tweaking your starting Fate Points.

This is a Cooperative Card Game, so players are trying to work together to complete these challenges – but that doesn’t mean you’re sharing your hand with everyone. Ideally, you’re supposed to role play your character a bit. Saying “I have 2 attack cards in my hands” is frowned upon vs “I think I can do some damage to this guy.” But ultimately, you’re the one playing the game so you can do what you like.

There are two types game play as well: Campaign and Random Scenario. The Campaign takes you and your friends through the first 5 novels in a fairly linear fashion. You can try to defeat the challenge the same way Harry does, or you can try something new with different allies. The Random Scenario generator is called “Side Jobs” which is a nod to the books. It’s a fun way to mix-up elements of the Dresdenverse and come up with unique stories to tell.

The artwork in The Dresden Files Cooperative Card Game looks great – it’s got a combination of the same style as the book covers and a “comic” look. The cards are also printed on good quality materials as well. Overall, I was pleasantly surprised with this one. The folks at Evil Hat are also setup to create even more expansions of this game. With more books to draw from and allies to add this game looks like it might have some legs on it. So if you’re looking for a new card game to play with your friends then check out The Dresden Files Cooperative Card Game! 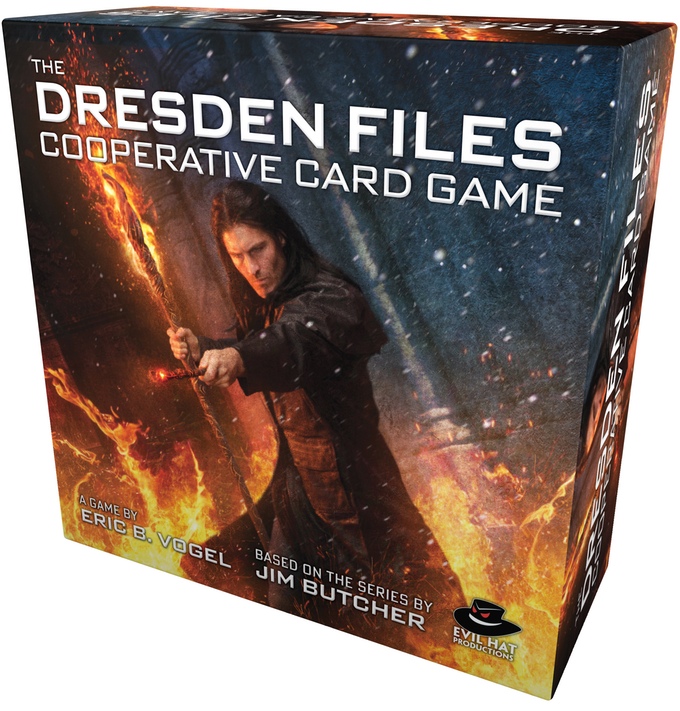 Play Harry Dresden and his friends as they take on the cases from the bestselling Dresden Files novels in the ultimate what-if scenario—what if Harry was on the scene with allies who weren’t there in the original story? The core game includes Harry, Murphy, Susan, Michael, and the Alphas and plays through the first five novels as well as Side Jobs, a random scenario generator based on the short story collection of the same name. Designs are already well underway for expansions featuring more series characters and more novels.

The Game officially starts shipping in June – but if your FLGS backed it on Kickstarter the may have it in stock so be sure to check!