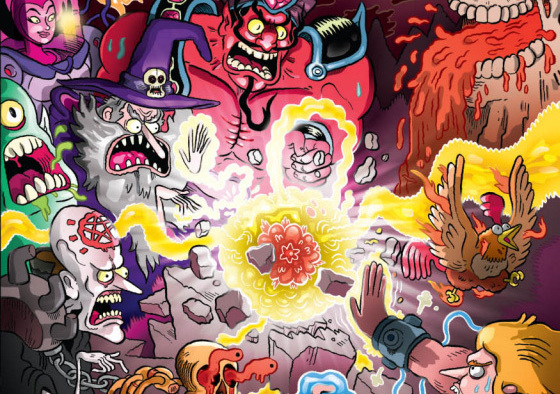 EPIC SPELL WARS OF THE BATTLE WIZARDS: DUEL AT MT. SKULLZFYRE – with a title that long this game better be good!

Every now and then our friends at Dragon’s Lair Comics & Fantasy bring over a “new classic” – Epic Spell Wars of the Battle Wizards: Duel at Mt. Skullzfyre is one of those games:

Epic Spell Wars is not a new game – but it’s back in print and available in stores again. The basics are simple – you’re one of the wizards at Mt. Skullzfyre and you’re here to battle for glory and to become the new top-wizard of all time. Unfortunately there are others there who wish to challenge you’re awesomeness. You all have concluded the only way to decide who is the best is to battle it out in an epic spell war! There is a catch – this isn’t a single winner-take-all duel…you’ve got to be the last wizard standing TWICE before you can claim victory.

Mechanically, this game is pretty simple. Each spell consists of 1 to 3 cards: The Source, the Quality and the Delivery. You can cast a single card spell, a double card spell or a triple card spell – however, you cannot double-up on the same type of card. That means no “Source-Source”, shenanigans. 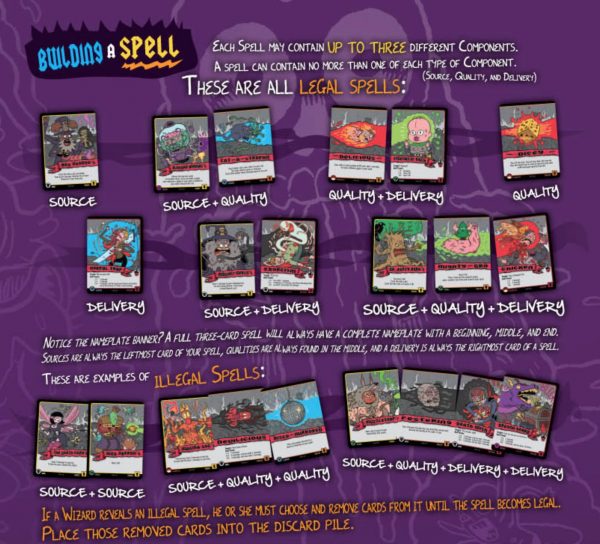 After all the wizards assemble a spell based on their cards, you each reveal them based on the initiative. Then you resolve the crazy spell effects you’ve just created. There are thousands of possible spell combinations and they are pretty much all crazy. The art style is really what drew me to this game in the first place. It’s like Adventure Time meets Super Jail. It’s not exactly kid-friendly but it’s also just over-the-top cartoony. You be the judge!

While the art is cartoony and twisted what really makes this game stand out (aside from the rock-solid gameplay) is that it encourages you to read the name of the spell you’ve created in a suitable wizard voice – preferably of the wizard you are playing as. And there are MANY wizards to choose from, each with a fairly twisted look to match. Creating a spell, reading it in a silly voice and melting the entire table is what this game is all about.

And if you lose, don’t worry because you’ll get a slight boost for the following round to help even the score. And if you keep dying you’ll keep getting loot to help out. Games can take a bit of time to get the hang of, especially once loots start popping-up, but it’s a ton of fun in the process. Epic Spell Wars is back in stores so stop reading and go check it out! 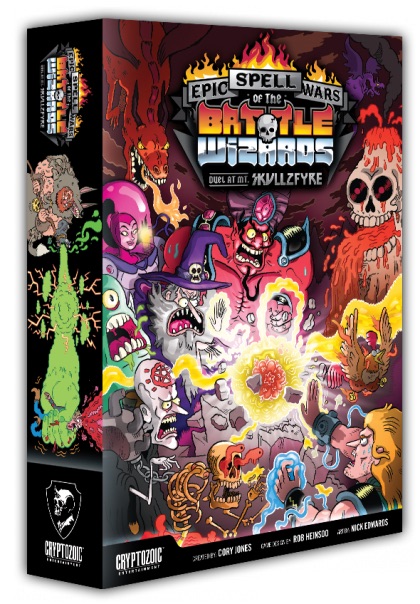 “Did you know that magical wizards are battling to the death … and beyond … right now!? “Why battle?” you might ask. “What have I got to prove, magic man?” Only who’s the most awesomely powerful battle wizard in the entire realm, that’s what! As a Battle Wizard, you’ll put together up to three spell components to craft millions* of spell combos. Your spells might kick ass, or they could totally blow — it’s up to you to master the magic. You will unleash massive damage on the faces of your wizard rivals in a no-holds-barred, all-out burn-down to be the last Battle Wizard standing. And it doesn’t stop there! Powerful magic items bring on a whole new level of bloody carnage as you and your mighty wizard opponents tear each other limb from limb in an orgy of killing! Do you have what it takes to use epic spells in a war at Mt. Skullzfyre? Will YOU be the Ultimate Battle Wizard!?!

*Not actually millions of combos … but like thousands or more, maybe.”