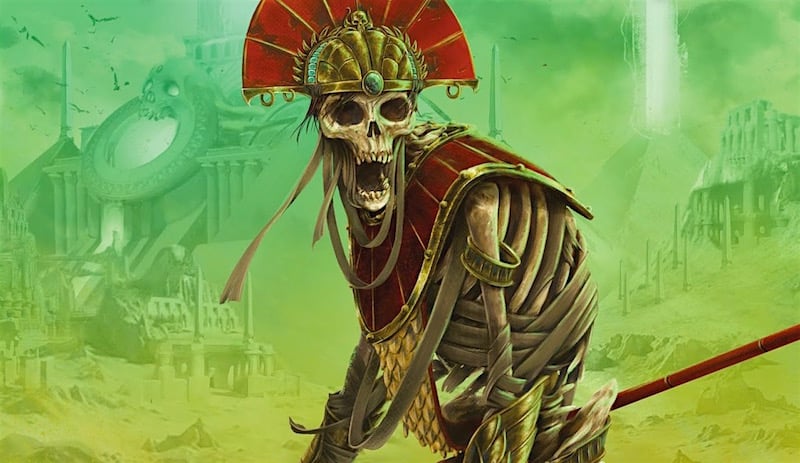 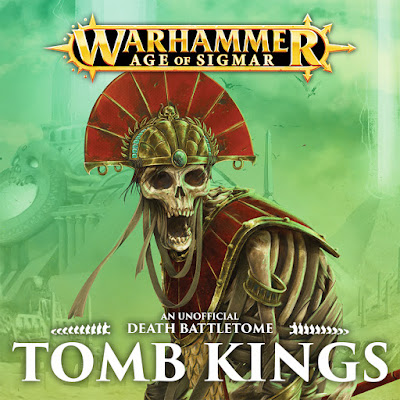 This is something that myself and a small team have been working on for over a year now and it’s finally done! The Unofficial Tomb Kings Battletome is ready to be used by all the prospective Tomb Kings and Queens out there. So what is this all about you may be asking? 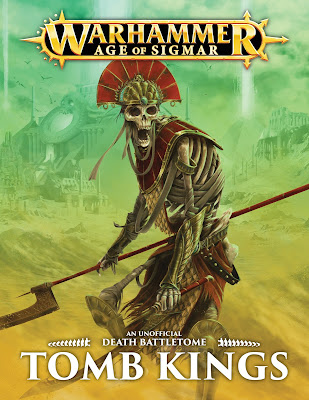 So let me start out with the obvious, this is a completely unofficial Battletome. It’s 100% fan made, 100% free to download and not associated with Games Workshop in anyway. If you want to just download the Unofficial Battletome without reading all of my thoughts on it just skip to the bottom of the article. 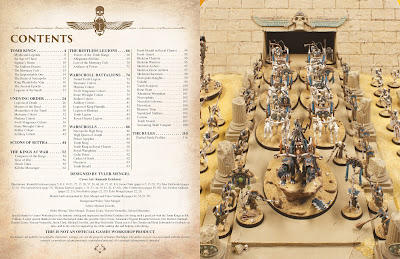 I have always liked the Tomb Kings from when I first saw them during their 6th edition launch. It wasn’t until the 8th edition launch of their new models that I jumped into collecting them. When AoS came out I was excited to see where they would go storyline wise within the Mortal Realms. When they were dropped from the line with the Grand Alliance Death book release I was understandably a little disappointed. I had already been working on a few little rules projects here and there that tied into my Tomb Kings before this, such as the Time of War rules and a Battleplan, both of which have found their way into this book. With Games Workshop discontinuing the product line and relegating the rules to Compendium status I decided to take this as an opportunity instead of a loss. 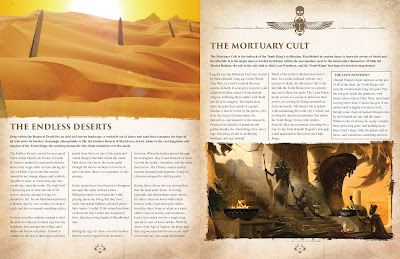 I love everything that’s going on in AoS right now, including all of the GW releases and their main storyline. I have a pure Nighthaunts army I have built and painted in the last few months, as well as a Stormcast army I have been working on since the game came out. I even just finished putting together a bunch of models for a Tzeentch Arcanites force and am excited about the Kharadron Overlords coming out shortly (pun intended?), but I still really like my Tomb Kings and wanted to keep them. I knew what I wanted to see as a Tomb King player and figured, well, why don’t I just take the reins and make what I would like to see myself? 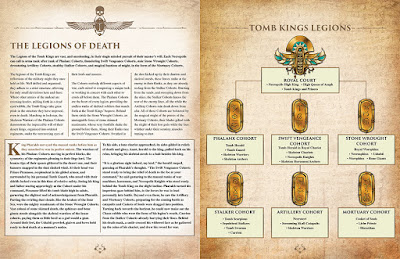 The Mortal Realms are pretty much infinite, and as such, they give you, the player, a ton of room to do your own thing, craft your own stories, and create your own kingdoms. With that idea that Endless Deserts of Shyish were born, the sandy domain of the many Tomb Kings empires. I wanted to take the Tomb Kings and root them firmly in the Mortal Realms, but at the same time I wanted to keep that connection to the world-that-was like many of the surviving undead characters had. I also didn’t want to change a whole bunch about them. I wanted them to be familiar, but new at the same time. 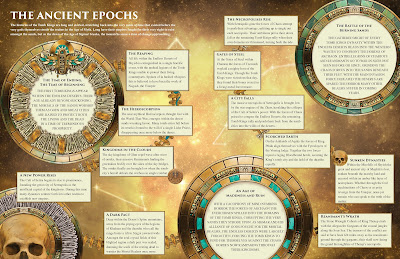 The lore section of this Battletome deals with that history of the Tomb Kings within the Mortal Realms. From their earliest beginnings in the Age of Myth, through the tumult of the Age of Chaos, and into the current Age of Sigmar and beyond. I made sure to encompass as much as I could. While the Endless Deserts are the largest domain of the Tomb Kings, it is by no means the only. I wrote about empires in other corners of Shyish, and even amongst the jungles of Gyhran and the ashlands of Aqshy. There are no restrictions in AoS and I made sure to carry that through into this book. There are plenty of exciting and pivotal moments in here including the rise and fall of the Cult of Settra, The Battle of the Burning Sands, the first Stormcast incursion into the Endless Deserts, and many more! I don’t want to spoil anything from the Battletome, but I hope you will be satisfied with what I did with the Tomb Kings and feel inspired to use it as the backdrop for your own undead empire, or even as a springboard to craft your own lore. 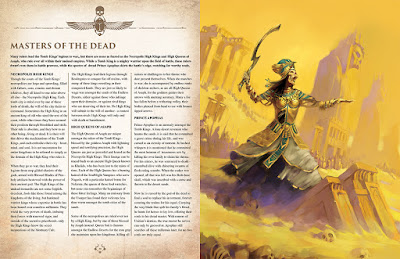 There is a bunch of awesome artwork in this Battletome, all of it original. Some was made specifically for this project, while others were graciously leant to the book by artists who had already made Tomb King fan art of their own. I think you’ll agree with me that the quality of this art is outstanding and I can’t thank the artists who leant all of their time and talent to the project enough. From the moody Adrian Smith-esque art from Max Fitzgerald, the fantastic landscape pieces from Jason Clark, and the mind bogglingly good cover art from Kenneth Erickson, everything in here is more then I could have hoped for. I listed all of the artists in the contents page of the book with what page numbers their art appears on, so if you see something you really like and want to know who to follow on Twitter or Instagram, just flip back to the front of the book to find out. 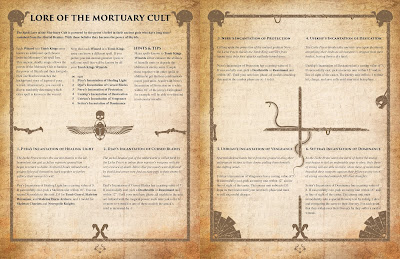 It’s not all just background lore and artwork though, as much as I would have liked to pack more in here. There are rules too! I have included all of the existing Warscrolls and Warscroll Battalions for the Tomb Kings in here along with their points (the updated ones from SCGT), but alongside all of that are some new rules. Some of you may have already seen the Allegiance Abilities I released over the summer. Those are included in here with some tweaks to bring them more in line with the rest of the book. If you take a pure Tomb Kings army now you can use the Tomb Kings Allegiance Abilities, giving you access to things like a Hierophant and Command Traits. There is also a new spell lore with six new spells for your Liche Priests to use, and twelve new artifacts, six regular, and six arcane for your wizards to use. You may notice a few fan favorites from past editions make a return here including the Destroyer of Eternities and a nod here and there to past named characters like Khatep’s Liche Staff. My main goal here was to make the Tomb Kings army feel just as up to date as the other AoS armies and give your army a little bit of flavor. It wasn’t just myself writing these new rules, but a small team including Vince and Tom from Warhammer Weekly. We made sure these were fair and balanced and not overpowered compared to what other armies had. 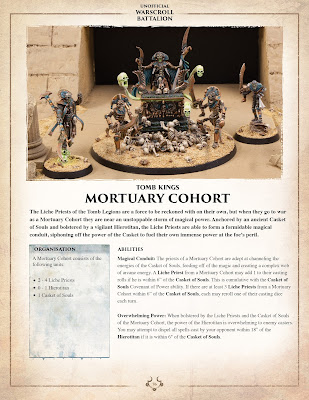 There are also nine new Warscroll Battalions. Where the Bonesplitterz had Rukks that made up their armies, the Tomb Kings have Cohorts which make up their Grand Legions. You can take the Phalanx Cohort, the heart of the legion, which consists of Skeleton Warriors, Archers, Tomb Guard and a hero, or go a little more hardcore with a Stone Wrought Cohort, made up of all the stompy statues of the Tomb Kings. 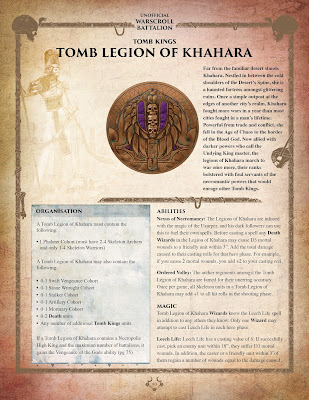 I also included rules for two different Legions just like how the Stormcast have Stormhost rules. You can collect a Legion of King Pharakh, or a Legion of Khahara, each having a different flavor to their unique rules. I would love to expand this more in the future with even more Legions of note. The Legion of Khahara for example is the army of Alexander Nygard who helped me with feedback during the creation of this book. 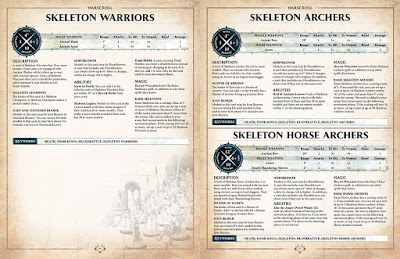 We even introduced four “new” Warscrolls to the unit section, although they may not be new to veterans of the Tomb Kings. I wanted to bring back units from 8th edition that never got rules in AoS because they didn’t have models. I know there are a bunch of people out there who converted these models in 8th and I wanted to let them play these models with proper rules in AoS, so we brought back the Herald in a Chariot, the Necrolith Colossus, the Hierotitan, and the monstrous Khemric Titan. All of these new units and battalions have points in the Pitched Battle Profiles section at the end of the book, and they are all marked as unofficial so you can tell which one’s are from GW and which are not. The only other change to the rules was to make Settra and Khalida generic characters, the Necropolis High King and High Queen of Asaph respectively. They are exactly the same, but no longer Settra and Khalida. This was done for a narrative purpose since I figured those two are such big names that if they were still around there was no way Settra would have put up with Nagash for instance. I wanted to make sure everything I did clashed with the official storyline as little as possible. I also added the Tomb King keyword to everything for Allegiance purposes. 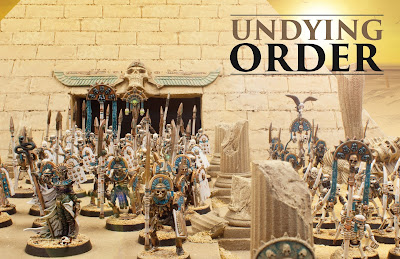 I have been working on this in some way or another for over a year and I am really proud of the final product. There is no way I could have completed this without the help of my small team of contributors who volunteered to help. So a big thanks to Steve Foote, Alexander Nygard, Kenneth Erickson, Eric Herkert-Oakland, Thomas Lyons, Vincent Venturella, Jason Clark, Michael Zorzella, and Max FitzGerald, and the contributing artists Thomas Karlson, Ollie Cuthbertson, and Jarrod Owen! I learned a lot about book design over the course of this and also had a ton of fun writing everything and taking pictures of my models. I think that may be my second passion after painting my models; taking cool photos of them and photoshopping them a little bit to amplify the effect.

Please feel free to give me and and all feedback on this. I plan on taking on all rules feedback and releasing an even more refined version 2.0 at some point in the future. I would love to see this used at events as well so please let me know if you are allowing it.

Let me know what you think of this in the comments below and/or you can send all feedback to [email protected]. 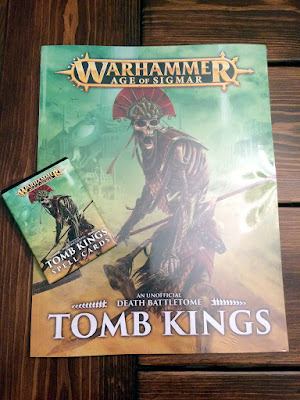 While the PDF is free for everyone I also printed up a copy for myself and I have one to give away as well! These won’t ever be fore sale, for obvious reasons, but I will be running a competition to give one of these printed Battletomes away for free. Are those Spell Cards I see next to it as well?? Check back on Monday to find out more about this contest and how you can win!