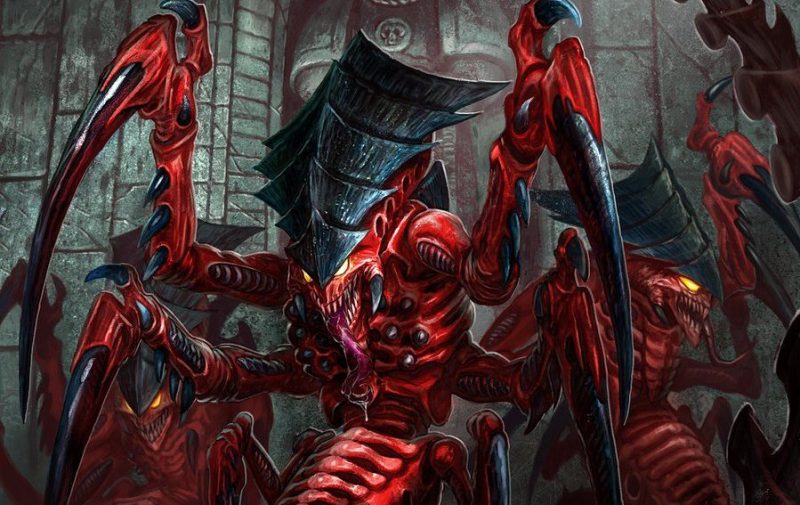 Today, we look at the long forgotten 40K beastie that has a bit of new life in Shadow War: Armageddon, the Ravener Brood!

Hello everyone, Danny from TFG Radio here to continue our trek through the Fast Attack slots of the Tyranid codex, and today, we look at the long forgotten beastie that has a bit of new life in Shadow War: Armageddon, the Ravener Brood! As always, go check out Frontline’s Tactics Corner like all the cool kids.

The Ravener is a fast, flanking melee beastie that is all about backfield disruption with the potential for a bit of shooting surprises as well. 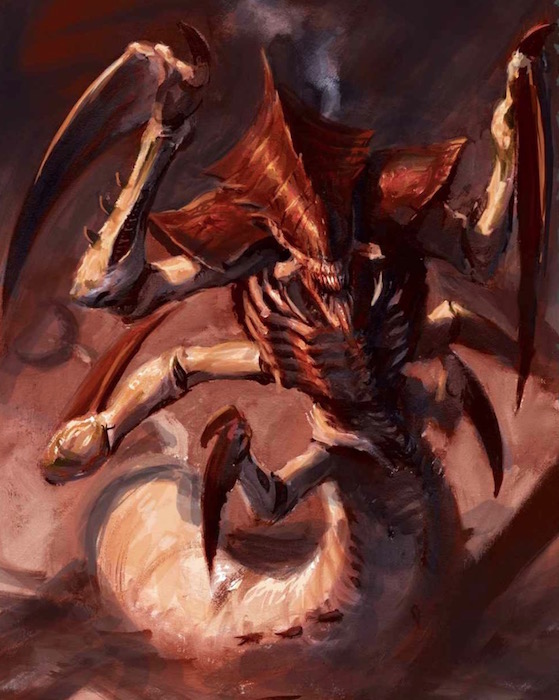 May exchange one set of talons for Rending Claws – AP5 Rending CC weapon.

You may also add The Red Terror to one Brood.

Ok, so the Raveners have a fair bit of customization as is fitting Tyranids although they don’t get access to any biomorphs.  The big thing here is that you get essentially two paths: you can load up for melee by taking rending claws, which is very worth it as suddenly each Ravener pumps out 5 WS5 S4 Rending attacks, which isn’t too shabby at all, or you can also take a ranged weapon, which is cool since it doesn’t override one of their melee weapons, so you can actually load up with rending claws and a gun.  The guns themselves get pricy quickly, especially the one that you want to take, which is the Deathspitter.  S5 shooting, especially on a unit that can pop up anywhere, is pretty good.  Granted, at BS3, you aren’t going to be hitting that much.

Finally, you can actually go to a full 10 bug strong unit by taking The Red Terror, who does not replace a Ravener but is simply added to the unit.  The Red Terror brings a new bug that is essentially an upgraded Ravener that is +1 WS/S/T/A/Sv and with +2 Leadership.   The Red Terror also comes with a Prehensile Pincer for an extra S6 AP5 attack in melee.  It has some extra tech from an additional special rule, but overall, it gives you a little bit more beef to the unit. 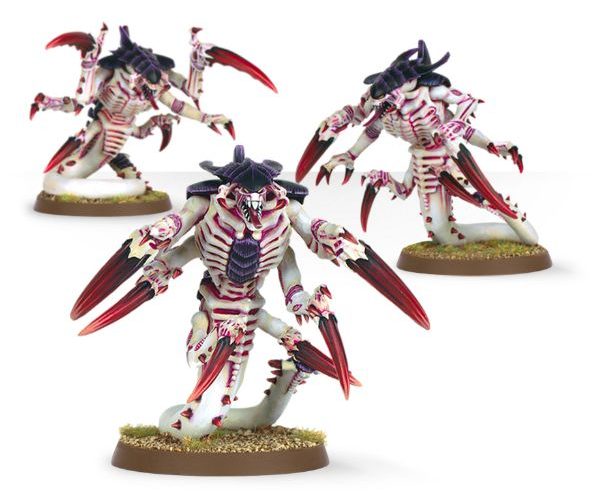 Deep Strike: We all know what this does, so yay for backfield shenanigans.

Instinctive Behavior (Feed): If they fail an LD 6 check when out of synapse, on a 1-3, they start to eat themselves, 4-5 they must charge and cannot shoot, and a 6, same as 4-5 but with Rage.

Very Bulky: If somehow being transported, it counts as 3 models.

Red-Terror Special Rule – Swallow Whole: If the Red Terror hits with 4 or more of its melee attacks  (not including Pincer),  you nominate a single enemy infantry/jump infantry/jetpack infantry model in Base-to-Base with the Red Terror. If you do, no wound rolls are made at all (except for the Pincer), and the nominated model must pass an invulnerable save (if it has one) or it is removed from play.  Models with Very or Extremely Bulky are not valid targets for this attack.

Ok, so there are a few things to note here.  The biggest is that Raveners have Deep Strike native, meaning they make great backfield disrupters because they can show up wherever the enemy is weakest.  Coupled with their ranged weaponry, this can make them surprisingly effective in the right situations.   They do have the worst IB, but as multi-wound models with typically low unit size, they don’t suffer as much as say Hormagants.  The Red-Terror specific rule of Swallow Whole seems cool in theory, and it can be great in sniping out foot-slogging characters if you are canny with your positioning, but it is very situational, and very prone to bad dice.  Hitting 4 attacks out of 6 if charging is statistically likely, but then isolated rolls like that are prone to wild swings. 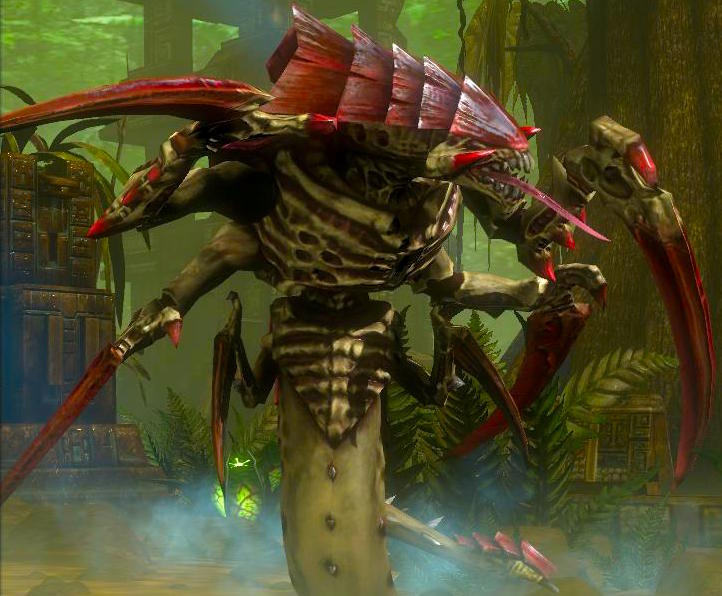 Ok, so what do we do with these bugs that have not seen play in a long time? Well, they are actually quite good at disrupting an opponent’s backfield.  At S/T 4 and 3W each, they are relatively beefy, and especially with Rending Claws, they can threaten a whole lot of backfield units in melee.  Coupled with deep strike, you can get them to where they want to be without suffering several turns of shooting.   I like them a lot as an MSU style disruption force that only takes 3 with Rending Claws. This is barely over a hundred points, and these three are quite capable of taking out most backfield camper units in melee, and as they are Beasts, they can recover from bad scatters much easier.   Several of these units popping up, especially if built around a list that has  a lot of deep strike, can give your opponent serious threat overload and let these little Raveners get to where they want to be.

You can also play with this idea by giving them guns.  Pumping out anywhere from 9-27 S5 shots can be scary for any AV10 Rear vehicle, and even infantry can start to sweat if you put this heat on them just by forcing saves.   A 3 bug unit is probably not enough shots though to really guarantee much, so you’d likely want this loadout if taking 5 or more in a single brood.   You can also go super wacky by taking a full unit and deepstriking them as 9 Raveners is a legit threat, especially with Rending Claws.  Anything not T8/AV14 or higher can die pretty quick to 45 WS5 Rending attacks at I5, especially if you can get lucky and spike those 6s to wound.   As these guys deepstrike, they do love Lictors, and as Fast Attack choices, you don’t have to worry so much about running out of slots for the Lictors.

So why are these bugs so forgotten and alone? Well, they have some typical Tyranid problems that really shut them down.   First and foremost, they have no defensive capabilities.  At T4 and 3Ws, that sounds good until you remember that they have a 5+ armor save, so bolters ignore them, and they have no invulnerable save.  Yes, they can hug cover, but then so many armies ignore that now, and the other Tyranid problem is that they don’t have assault grenades, so chances are, their I5 is wasted as they swing last for charging through cover. Against 5 scouts or 3 jetbikes, they will win, but then as they cannot charge out of deepstrike, they are going to eat shots first, and even 10 bolter shots is going to lay some hurt on them.  They are super prone to instant death just like Warriors as S8 is super common now, especially in melee where powerfists or even power staves with blessings up can ruin their day.

The other big issue is that they are expensive.  If you want a big, beefy unit that can absorb some firepower, you are spending a lot of points.  This is even more true if you want them to shoot as they need bodies for their volume of fire to matter, and well, you start spending 200+ points on a unit that dies to any real attention.  The Red Terror itself almost doubles the cost of a minimum unit, and well, it is cool and all, but its special attack will likely never work out well.  Sure, it can be cool to eat a powerfist, but that relies on your opponent making some poor model placement decisions.  The Red Terror also doesn’t have Rending, which really is how Raveners kill things.

Are Raveners competitive? No, not really.  Theoretically, they could work in a very outside of the box army that eschews Flyrants for a null-deploy style army, but they are just too squishy for the points, and without assault grenades, they can’t do too much unless you invest a lot of points for not a lot of gain.  If you want to have some cool models that can be quite fluffy, go for it, and in Shadow War Armageddon, at least one is a good idea to have as a specialist, but well, that’s about it unless you are building a narrative game (which is a great time anyway. It’s not like you can only play 40K competitively).  Thanks as always for reading, and be sure to check out TFG Radio.

When’s the last time you saw a Ravener on the tabletop?