The Forces of Chaos might of had a relatively short FAQ – but some of the tweaks are a pretty good sign of things to come!

The Warhammer 40,000 FAQ’s dropped earlier this week and we’ve been showcasing some of the big changes in each one. We started with the Rulebook FAQ and have also looked at some of the big ones for the Imperium. Today we’re taking a quick look at Chaos FAQ. 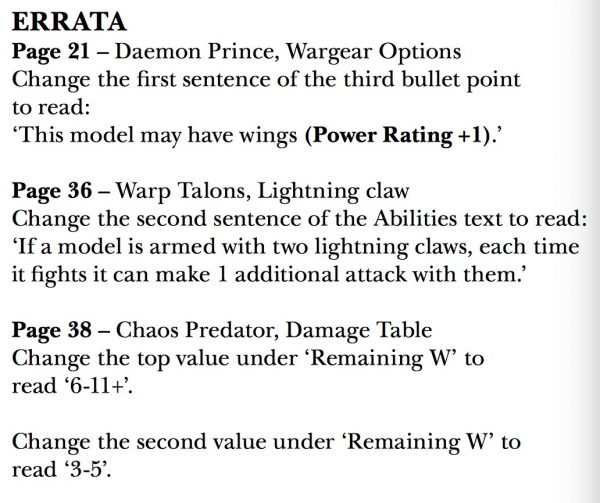 Most of the FAQ was an errata to the rules – this is just a short list of things that were either overlooked and weren’t caught until the book had already been printed. Interestingly enough, it’s a mix of adjustments that helps some units and hurts others. For example, in the snippet above you can see the change to Daemon Prince on page 21 is just an increase in Power Rating. Then we have an actual rules adjustment for the Warp Talons. Then we have a tweak to wounds for another unit.

As we were going though the Errata these types of changes were common. The only other type of change were points adjustments. What this tells me is that GW is at least acknowledging there were errors in the book (probably due to multiple versions/drafts of things getting worked on simultaneously) and some of those errors made it to final print. But at least they have taken steps to actively correct those and get the word out. As I wrote in previous articles, that process would have taken MONTHS to complete in the past. Now, GW is pro-actively correcting things much quicker.

On To The FAQs 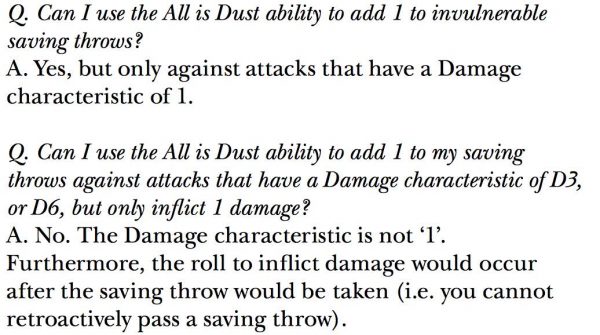 The clarifications on the “All is Dust” ability are really good. I didn’t think of it working on Invulnerable Saves, but it makes sense – an Invulnerable Save is still a save after all. That also makes Rubric Marines really great against things with rending attacks (like my Genestealers…)

I also appreciate their rules writers addressing the order of operations and preventing “retroactive” saves. If you follow the steps correctly this should have been an issue to begin with! But hey, examples are great for folks who learn better by seeing how rules interact (like me).

I’ve chosen to include this as a it calls out some of the truly funky and fun things that can happen in 40k 8th. Yes, you can just create an ever expanding Pox Walker army when they fight Necrons. Did the game just break? Maybe just a tad… but that’s what happens when you have all those rules interactions. Sometimes you get really awkward results. I say when things like that happen you just have to laugh and keep playing. Welcome to 8th! 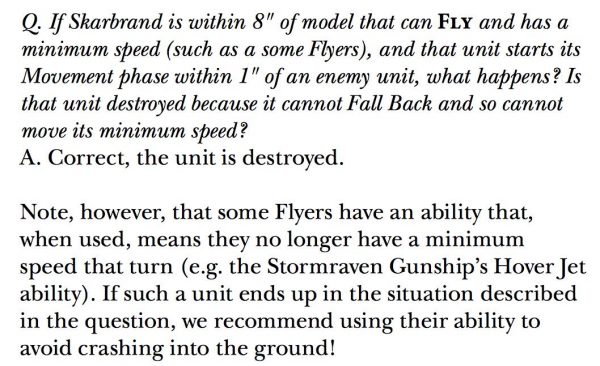 I’m including Skarbrand’s abilities below just to show how awesome this rules interaction actually is:

As I wrote above – sometimes you get really awkward results when all these rules collide. This is another one of those times. Personally, I find this to be quite hilarious! I also have been trying to come up with a situation where this might actually be an issue. Then again, if I were playing against an opponent who was able to generate this very specific scenario I would just tip my hat to them and laugh as my flyers were destroyed. Well played, sir. Well played!

I wanted to Include this ruling because it references a situation specific to a matched play game. This shows that GW is embracing the three ways to play and acknowledging there are differences between the types and that also includes how “strict” those rules are. In this case, psychic powers are being held to a strict interpretation for matched play – and I’m perfectly fine with this. Matched play is supposed to be the rule set used for tournaments and games that are trying to be held to a stricter rules standard. If you’re playing narrative or open play it’s okay to have a bit more freedom with powers and abilities. All three are valid ways to enjoy the game – but they are different and this FAQ highlights those differences.

I used to be a necron in my past life…but then I reanimated and now I have a twin!

When taken as a whole, there might not have been a lot to say as far as changes in the Chaos FAQ. At the same time, these adjustments are saying a lot about how GW is approaching 8th edition. Rapid release points tweaks, acknowledging and fixing rule wording, and highlighting some of the more “awkward-yet-functioning” rules interactions are all things I’m glad to see in an FAQ. Keep it up GW – this is all good stuff!

What do you think of the pace GW has been keeping with the FAQ release? Are you liking the rulings or do you disagree with how they are doing things?

40K Tactics: Burning Flyers Out of the Skies