The Fate of the Konor System is in your hands as the Warhammer 40,000 Summer Campaign officially kicks off this week!

You’ve had over a month to muster your forces and ready for battle. Now – It has BEGUN! Games Workshop has hit the opening bell of the Fate of Konor Summer Campaign. The enemy has been sighted and the first shots are being fired as week one kicks off with the battle for Astaramis.

Ultramar burns. The putrid warbands of the Death Guard, led by the Daemon Primarch Mortarion, have launched a furious assault upon the Ultramarines’ stellar empire. This eruption of all-out war threatens to drown the stars themselves in bloodshed and terror. Legions of Heretic Astartes and Chaos-spawned monstrosities have already rampaged across world after world, spreading the malignant corruption of the Dark Gods in their wake. Yet all hope is not lost. The return of the Primarch Roboute Guilliman has stalled the seemingly unstoppable momentum of the Chaos advance. In a series of bloody battles, the armies of the Imperium – reinforced with mighty Primaris Space Marines – have reclaimed many worlds thought lost, forcing their hated foes to retreat and regroup.

A vast segment of the Chaos armada descends upon Astaramis, the most populous planet in the system. With its teeming cities arranged in vast concentric rings, the well governed and prosperous hive world exemplifies the grand dream that is Ultramar. However, even Astaramis’ formidable orbital defence platforms and veteran garrison are not enough to hold back the oncoming tide. The Chaos armada launches waves of magmatic torpedoes, and macro-cannons obliterate planetary fortifications and engulf entire regiments of defenders in searing firestorms. Heretic Astartes and their allies slam to earth in blistering drop pod assaults, blasting apart anything that moves even as they march implacably onwards towards targets of strategic value.

We’ve already gone over the first week’s mission but here are a couple of key things: 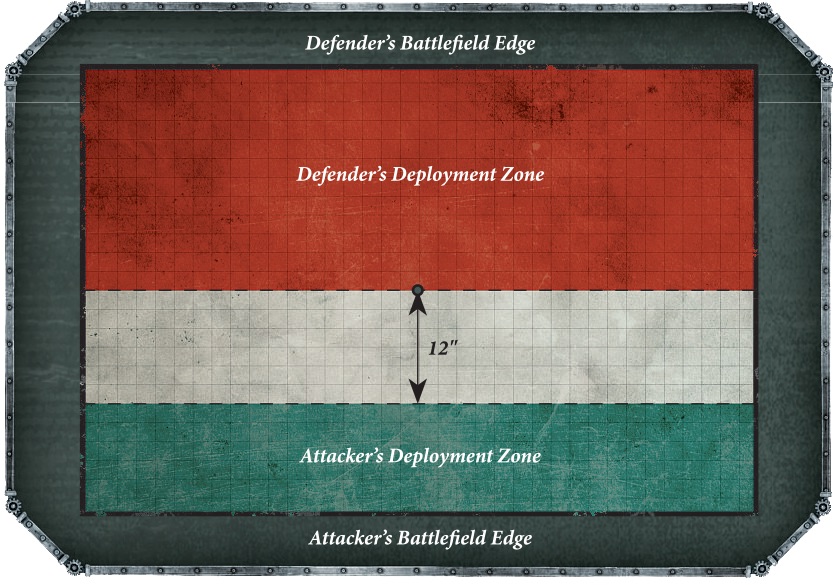 This is important so here’s a direct quote on how Reserves are DIFFERENT:

When a unit arrives, set it up anywhere within 6″ of the controlling player’s battlefield edge that is not within 9″ of any enemy models

The battle is a Victory Point Game – the player with the most wins and in the case of a tie it’s a draw…with some slight changes:

For the full rules check out the mission parameters HERE.

Also, the Fate of Konor Website’s planetary map section is pretty cool. It has a three different versions depending on your browser. If you’ve got the bandwidth, I suggest taking a crack at the 3D interactive version. There are real-time battle updates on the sidebar which is pretty cool! Even the data-capped mobile version is well done and easy to navigate. You can move the planet around and take a look at all the different locations. Games Workshop put some time in on this one! 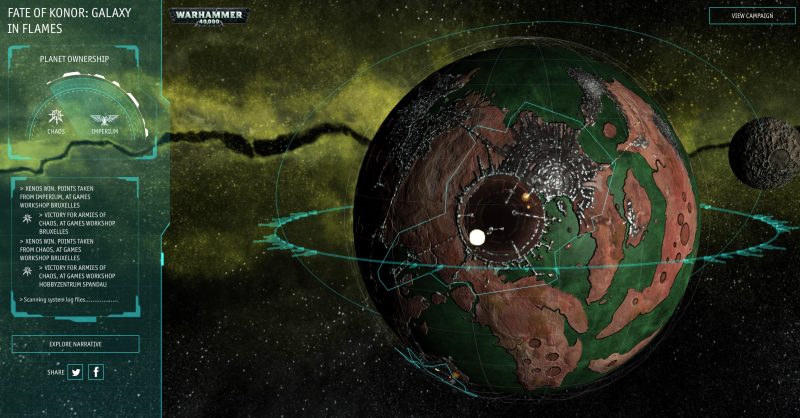 On top of that each region has their one tally-tracker to see who’s in the lead. The Imperium is off to a strong start but that’s probably because they had the home field advantage.

You can also hit up the Vox Chatter Page to catch-up on any events you may have missed. It’s still the first week but I’m sure we’ll be seeing more from that as the battle progresses.

If you want to get involved all you have to do is check with your FLGS or local GW store to see how you can participate! Every player – Imperial, Chaos, Xenos, Narrative Gamer, Hardcore Tourney Ringer, or Expert Hobbyist –  can make an impact on the campaign. So what are you waiting for? The Fate of Konor is in your hands!

As a Xenos Player, I’ll be taking bribes to see which side will curry favor with the Hive Mind…