Time to bust out those Primaris Pokeballs, two new boxes have appeared.

Spotted in the wilds of the Internet, amidst an argument about whether or not it makes sense for Guilliman to “throw out his codex a few years after writing it” (from his perspective, assuming that he hasn’t spent millennia trapped in a nightmarish awareness in stasis)–images of the boxed sets for the new Reivers and Aggressors. 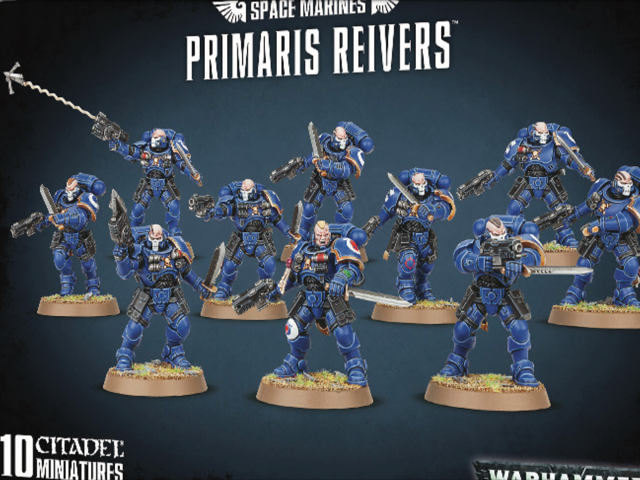 So, if any of you were freaking out that Reivers come in packages of 3, but Reiver squads come in 5-10, you’ve got an answer to that dilemma, leaving only the hot dog/bun conundrum to be solved. Also those grappling hooks look radical–though I have to assume the launched one is there more for dioramas and sweet displays, because there’s no way that’s making it through more than like two games before snapping. Still, it looks like another tool in their kit. I wonder if it’s a weapon they can use to increase charge range?

Something like: models equipped with grappling hooks add an extra die to their charge–or maybe they just shoot and auto-charge, though, that seems more like an Ork use of the gun. I could see it maybe affecting deployment–maybe letting them infiltrate or have an extra move before the game begins.

So, these guys look incredible. I love that heavy armor–it’s very terminator-y. Those missile racks look like they’ll be able to have some long range firepower. But look at those gauntlets. Remind you of anyone? Looks like those gauntlet gatling guns are back because a certain someone is impressed with a certain Chapter Master. Yes, that’s right,  it looks like maybe Marneus Calgar finally made dad proud. He must be tearing up a little bit–and if you listen closely, you can hear Cat’s in the Cradle playing over by Ultramar right now. Roboute and Marneus are finally gonna have that game of catch.

Excuse me, I’ve just got something in my eye. I’m gonna go call my dad.