D&D Beyond Begins Phase 2 and 3 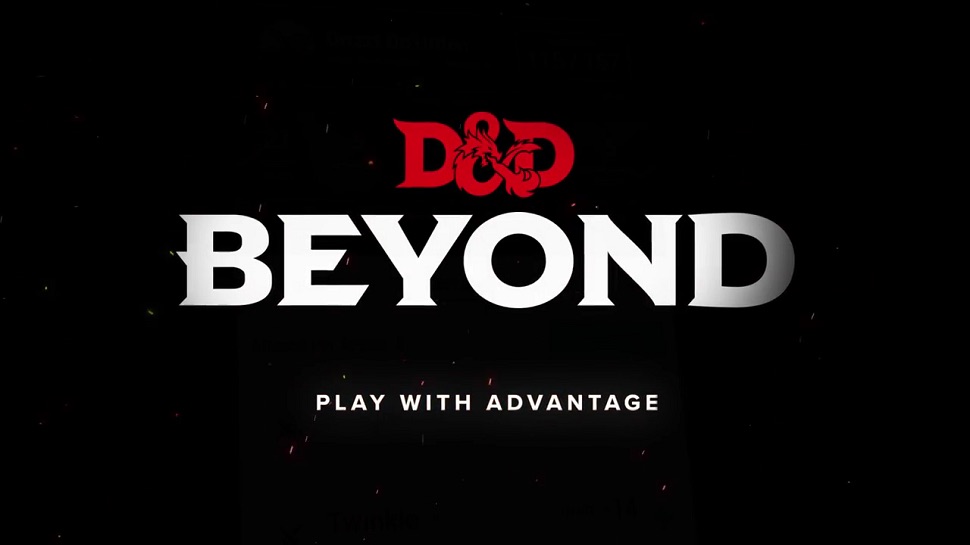 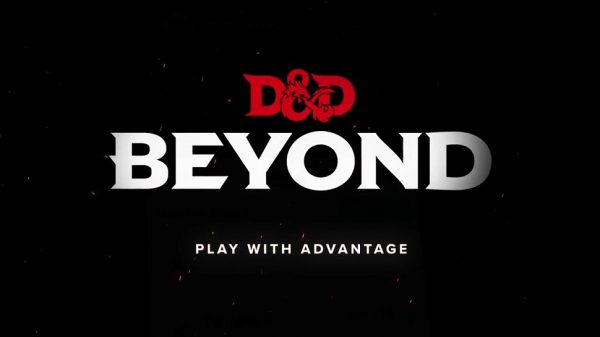 D&D Beyond has opened up phase 2 and 3 of its beta test to the public. Take a look.

That’s right, D&D Beyond has extended the beta to include the both phase 2 and phase 3 at the same time! This is good, because otherwise all you had as an app-ified SRD, which wasn’t really all that useful. There are plenty of other rules compendium apps out there, but if you’re going to index that all and let players manage characters (phase 2) and track campaigns and add their own homebrew content (phase 3) then we’re talking. 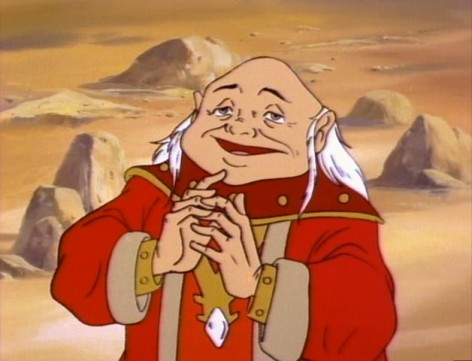 Tell me more about your world.

So that’s what D&D Beyond promises. They opened up their beta last Thursday, and we’ve been messing around with it since then. It seems pretty cool, though it is not without its problems. Thankfully they’re still in beta, so now is definitely the time to get in there and really put the system through its paces.

So far we’ve taken the character creator and campaign tracker out for a spin. Today we look at Characters. Tomorrow we’ll go over Campaigns.

This is the meat and potatoes of the app, the use-case for the biggest chunk of users. Above all else D&D Beyond is an app that’s meant to aid the game–and while being able to look up rules is nice, character creation/management is the function that players will need the most, and in a typical D&D game, players will outnumber the GM.

So this is where the rubber meets the road in this app. And having spent a little time with it, it’s working out pretty decently so far. Character creation is thorough, they’ve included all of the steps, including a randomizer for characters, which is a great tool for DMs and Players alike. Can’t think of what to play? Hit random. Need an NPC in a jiffy? Randomize it! 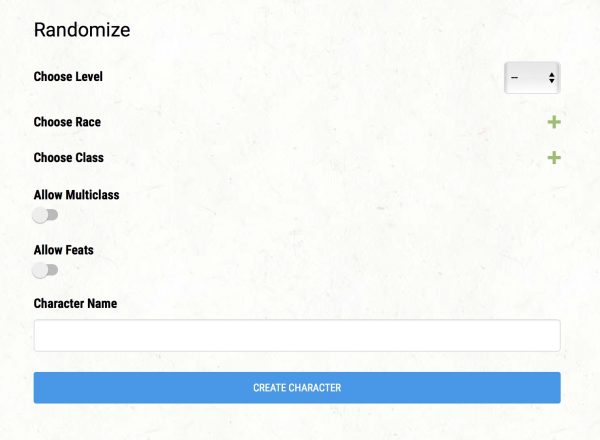 The possibilities are limitless. Especially if you flip those two forbidden switches. Do it…allow multiclass…

This can lead to some hilarious combinations–while testing it out, I randomly generated an Earth Genasi Rogue who was optimized just terribly enough to be entertaining to play. I really like that character idea. It’s an extra bonus to help mine for unexpected character combinations, and a nice creative refresher. Here are another couple that came up: 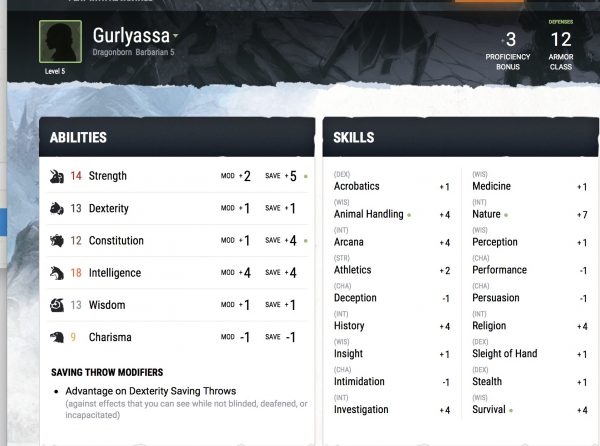 The Smartest Barbarian. Not pictured: the Scholar Background. I can’t make this up. 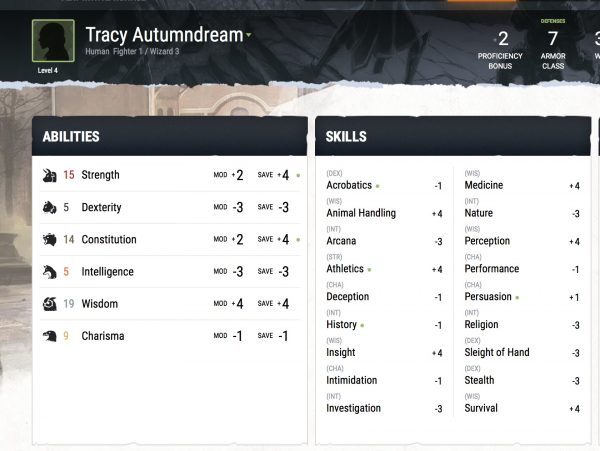 I’m pretty sure this character is straight out of a Dragonlance novel.

But leaving aside the fun of a Random Number Generator, they’ve got character creation boiled down to a few easy steps. You pick your race, your class, set your level, and you’re off to the races. The app allows for point buy, standard array, or random stats–though curiously enough, it doesn’t randomize the stats for you. It just lets you enter them manually, so you’ll still need actual dice (or an app) if you want to generate those stats. Otherwise the random stats seem to be based off of a random point-buy sorting.

At any rate, character creation is for the most part pretty seamless. You’re presented with all the relevant data and can select your abilities and character archetype. At present there’s only one archetype available for each class, though there are plans to introduce more in the full version. Levelling up your character is a breeze too. You just adjust your level and it tracks what you gain and when. It takes a huge load off of the player’s minds. And there’s a ton to work with. So far I’ve made a few characters to put this through the paces and I’ve been enjoying it. Let me show you a picture from the birth of my favorite son, Samply the Warlock. 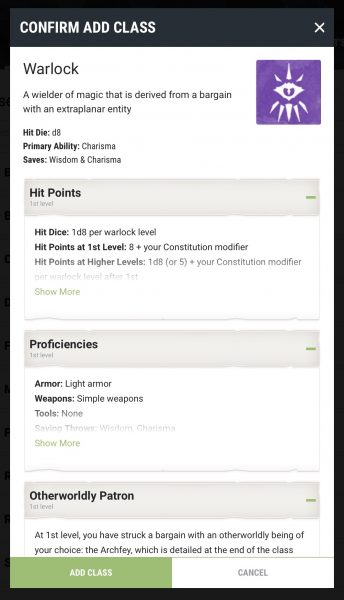 There’s a variety of races to choose from, including the Aarakocra, Genasi, and Goliath from the Elemental Evil Player’s Companion. None of the Volo’s Guide races as of yet, but again this is still in the beta. Each of the racial traits gets added to your character sheet kind of modularly so you can change them as you go. It’s the same with picking the classes–though I have noticed that as you level up your character, if you make a mistake (say you meant to add a level of rogue and you clicked ranger) at present there’s no way to undo a decision you’ve made. You just have to start your character over from scratch. Not too inconvenient if you were multiclassing at level 1, but the further on down the road you go (and especially once we get to things like campaign details) it becomes almost untenable.

Being able to edit that seems like an addition they’ll absolutely need to make.

Once you’ve created a character, the D&D Beyond App really shines. It’s a fantastic character tracker, enabling you to modify your hit points, track hit dice spent, as well as limited use abilities (got something you can use once per rest or the like, you’ll find it conveniently located). There’s a lot that goes into any character and the app does a great job of aggregating it all.

Getting all that information in place can be a little frustrating though. For instance–if you want to equip your character with a short sword, first you’ll have to navigate to the gear section under manage equipment, then you’ll need to find and add a short sword to your inventory, then you’ll need to equip it. This doesn’t seem like much, but when I tried to add leather armor to my Warlock, Samply (a proud Tiefling name), I went through three different iterations of search terms before I unlocked the right keyword. 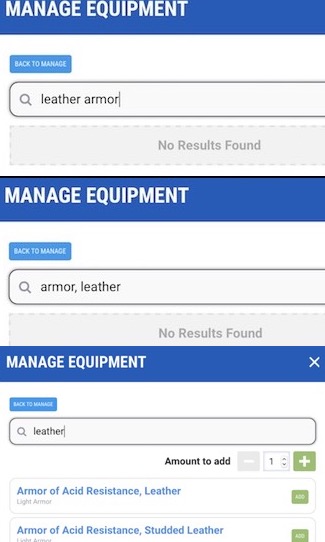 Apparently the right word was leather.

But as you can see there’s another little quirk here. When you’re adding anything, be it equipment, spells, feats, or the like–all you can do is scroll through a list. If you want to actually see what it is you’re choosing, you need to go search it out separately. This seems like an extra hassle, especially since we’ve seen the opposite already modeled whenever you select a race. When you choose a race, you get a little mini-window that has all the pertinent info, and from there you can make the final decision. 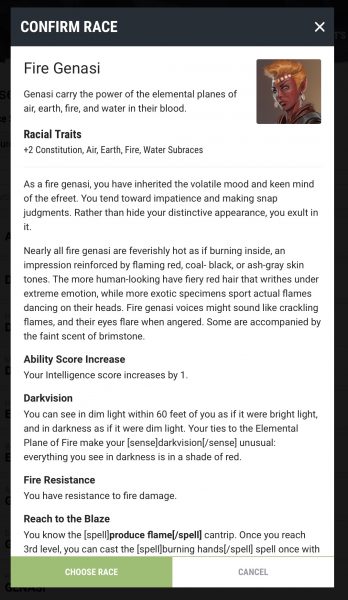 You can scroll all the way down to see what each of the abilities gives you, it’s super sleek and incredibly classy and picking out a class and race made me feel like I was somehow involved in disrupting the Character Creation industry. That’s how easy it was. So to see the parts that you’d need to use the most frequently so clunky in comparison is very jarring. But again, this is the beta, and I’m holding out hope they’ll implement something as dynamic as they have for race/class selection for the other stuff.

In particular for spells. I don’t know why they seem to get the short end of the stick here, but they do. When picking spells, you can’t look up what an individual spell does as you select it, and where the sheet does this lovely job of auto-calculating things like to hit/damage for weapons and presenting them to you with pertinent information ready to go–when it comes to spells, it wants you to read and keep track of modifiers yourself like some kind of caveman. 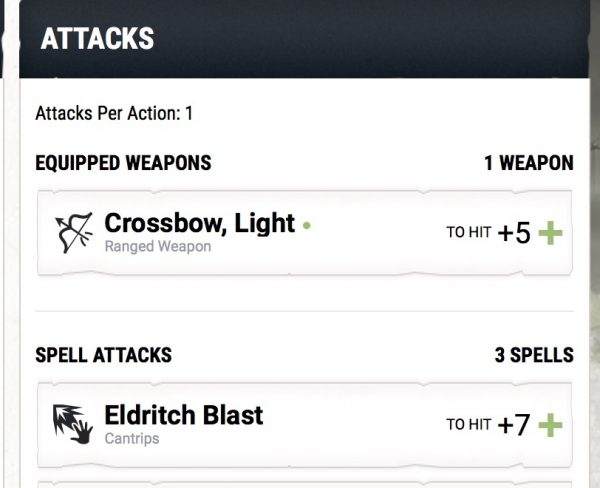 Now this is great. I love this part of the character sheet. I know I’m pointing out one of the clunkier things, but I cannot stress enough how much thought has gone into things and how well it works out so far. Both of these have their respective to hit rolls calculated out. If you have spells that require saves, they’ll list the stat and the save DC together for quick and easy reference and it’s perfect. But if we expand this– 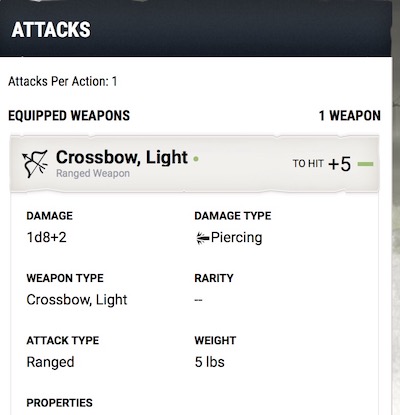 The Crossbow guy is great. Everything you need right there. But then look at the spell… 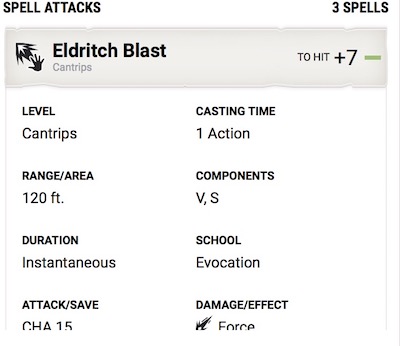 You get a whole bunch of stuff you don’t need. Range is great–but knowing damage would be so much better. And again, you can scroll down on that tab and see the full info, but it only gives the general spell entry, which is 1d10 and then you get extra blasts every few levels. But it seems like it would be easy to say “it does this much damage based on your level.”

This might be super nitpicky, but they’ve done such a phenomenal job of making the sheet feel like your character. It just feels odd not to see your spells which in all other ways are mapped to your character not level up along with you. Otherwise the app is fantastic. It keeps track of all the little fiddly details, you can choose to use as many hit dice as you like. You can take a short rest, take a long rest–the system on display is amazing. I highly recommend it–check it out for yourself see what works and what doesn’t. And be sure and let them know. Now, more than ever, our feedback is helping to make the game we love better. So get out there and game, friends.

Let me leave you with a look at the character sheet–it’s robust and it’s just wonderful. So here, my favored son, Samply the Warlock in all his glory: 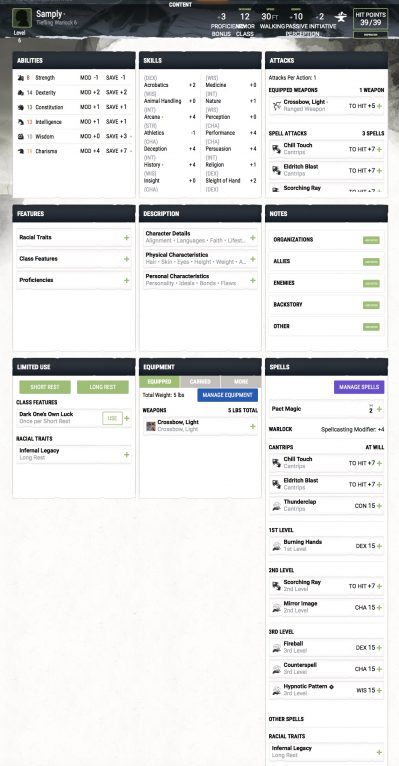 The Notes section is my favorite. You can write your own backstory, track allies and enemies as you run into them–and according to D&D Beyond’s grand scheme, you’ll be able to share this easily with other peopl ein your campaign, so your GM can keep track of all this from a single central hub. That idea is really cool, I can’t tell you how helpful it will be to have my players keep their own dossiers for me.

Have you tried out D&D Beyond? What are your thoughts?