There’s a new Sourcebook coming this year for FFG’s Star Wars RPG featuring all your favorites from Rebels and Rogue One.

Newly announced from Fantasy Flight Games, Dawn of Rebellion–a sourcebook that details life in the era preceding the Battle of Yavin. Specifically calling out recent favorites Star Wars Rebels and Rogue One, the Dawn of Rebellion book is meant to be used with each of the different flavors of FFG’s Star Wars RP: Edge of Empire, Age of Rebellion, or Force and Destiny–or all three at once.

Dawn of Rebellion is set to bring a world where the tyranny of the Empire is at its most oppressive, where people struggle under the might of a crushing, Galactic Empire.

Where scoundrels, smugglers, and thieves work at the edges of society taking what they can. A world where hope is a distant dream, and the Dark Side feels ascendant. And yet, amid all that, rebellion dawns. It’s a great setting–and one we’ve recently seen explored, honestly Rebels is one of the best examples of it.

And you’ll see the stats for all your favorite things appear in this new source book. Want to lead a gang of soldiers in a desperate, almost hopeless mission? You’ve come to the right place. Want to struggle to maintain the Light? Same deal. There’s all kinds of stories waiting to be told on this Era (and the fact that it’s an “Era Sourcebook” makes me wonder if we won’t see other Eras down the line). 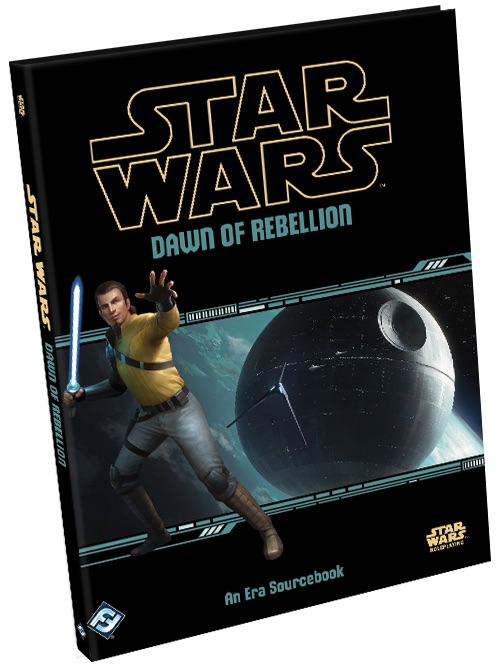 What I really like is that there’s an option for how to use this setting through the lens of each/all three of the core books. It changes them, not just by tweaking the song, but by introducing new character options, etc.

Further details will be forthcoming, but the book itself is out in Q4 of this year, so we have a while to wait.

For now, all we have is the announcement news, but there’s hope that a preview won’t be far, far away.