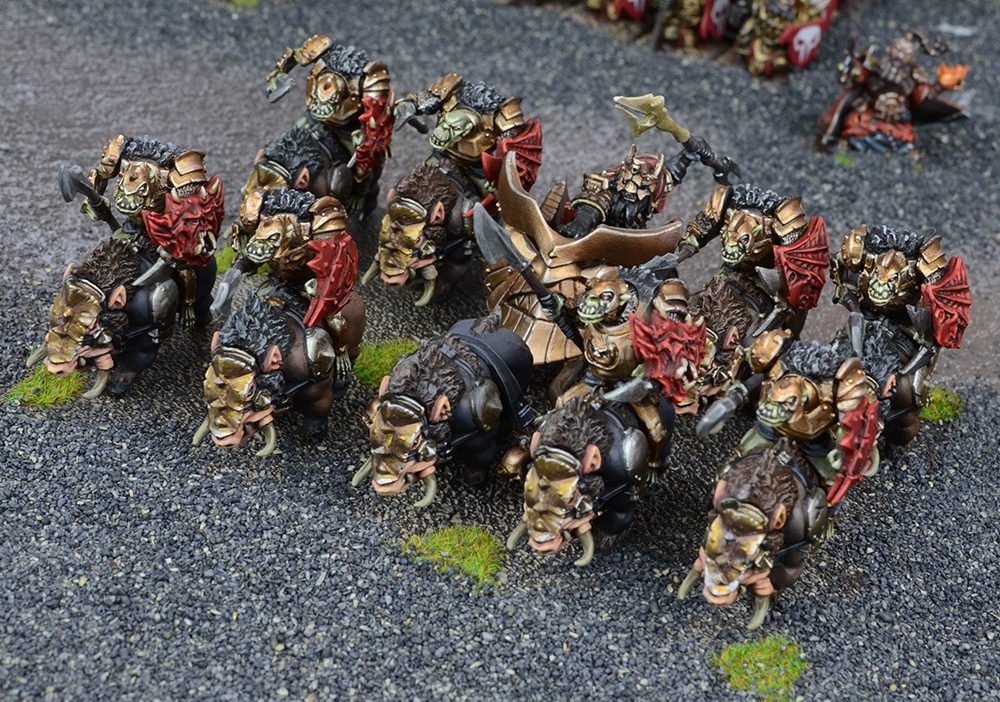 Tainted by the foul magic of the Wicked Ones the Abyssal Dwarves go to war for their own greedy plans. And greed is good…

Introduction to the Abyssal Dwarves

In our continuing series, Hunter Bulkeley introduces you to the Kings of War factions taking part in the Edge of the Abyss summer campaign. Today, he focuses on the vicious Abyssal Dwarfs.

Who are the Abyssal Dwarfs?

In a similar way to how the Celestians split into two aspects, one its virtues taken to the extreme, the other its vices, the Dwarfs are divided between the Imperial or Free Dwarfs and the Abyssal Dwarfs. When Domivar split the world, forming the Abyss and sealing away the twenty-seven Wicked Ones, some Dwarfen holds dwelt in the area. In their greedy pursuit of wealth, these Dwarfs dug too deep, their mines brushing up against that twisted prison. The tainted magic of the Wicked Ones warped these dwarfs, emphasising their worst vices. Where once they had been a loyal and honest people, they became deceitful, stabbing each other in the back in their pursuit of power and wealth. Where once the dwarfs had pursued gold out of a desire to create beauty, they now seek it purely out of greed. The Abyssal Dwarfs still dwell in the lands that first corrupted their people, now known as Tragar. While there are many holds scattered within this blighted land, most rise and fall quickly as their rulers’ fortunes change. Only Deiw and Zarak remain as the other holds pass, their names the dwarfen words for power and pain. They stand at either end of the Abyss, pillars of internal politicking and traitorous plots.

Lazy, corpulent creatures, the Abyssal Dwarfs rely on slaves to preform menial tasks in their holds. The Ratkin hordes came from Bharzak the Grim’s laboratory in Zarak, the race’s prodigious breeding rate intended to keep the Abyssal Dwarfs supplied with slaves. That experiment ended with half the Zarak dead and one crazed iron-caster sharing the body of a golem. The Abyssal Dwarfs have since returned to their usual slaves of orcs and goblins, at least till another mad sorcerer decides to “fix” the supply problem. Despite their corruption, the Abyssal Dwarfs have lost none of their southern kin’s ingenuity or need to invent. Infernal warmachines, capable of terrifying devastation are often fielded against their foes. Since they are either slow to reproduce or do not reproduce at all (scholarship is divided on the subject) their armies field magical abominations to supplement their few numbers. Mad Iron-Casters have given life to obsidian golems that tower over even the tallest Ogre. Black sorcery mixed with less than enthusiastic test subjects gave birth to Abyssal Halfbreeds, creatures with the body of a dwarf, but lower half of a quadrupedal abomination.

Creatures of hatred and greed, the Abyssal Dwarfs match their Abercarri cousins with a desire to conquer all. This similarity is not lost on the Freehold Dwarfs who dwell in the Halpi Mountains between the Abyss and Abercarr. Thankfully, their constant infighting, backstabbing, and complete and total lack of trust of each other prevents them from ever focusing their attention outward. Should a leader ever arise that can unite the Abyssal Dwarfs as a people, the world will tremble under the march of black iron boots and arcane abominations. The Abyssal Dwarfs are the wicked and malevolent take on their dwarf cousins. The core units are comparable with the dwarfs and are as slow moving, but players have access to the winged nuisances that are gargoyles and also fast moving cavalry in the form of Abyssal Halfbreeds (part dwarf, part…thing). The army has a different take on black-powder weaponry, favouring mortars and blast weaponry over more direct cannon fire. The impressive golems can form an implacable line to provide solidity and stopping power. Blacksouls, Immortal Guard and Decimators shape the army core and make for a typically stubborn dwarvern battle line. The Decimators are deadly at short range with their Thunderpipes if they can get into position. Abyssal Berserkers and Slave Orc units are slightly faster units that can be a first wave or counter attacking element. Lesser Obsidian Golems, Gargoyles and Abyssal Halfbreeds give the player options on how the army should behave and be themed and the army general is spoilt for choice with three different types of mortar and a flame-thrower to choose from. Heroes are pretty decent with some good hitting power, flying options and magic too – Iron-casters are more than capable of acting as lynchpin to your forces.

If you want to enslave Mantica for your own wealth and gain, you can use the code ABYSSALDWARF10 to receive 10% off the Abyssal Dwarf Army and Mega Army on the Mantic website. Next time, Hunter will be introducing the inventive Goblins.