Retribution: Lord Ghyrrshyld, The Forgiven Under the Microscope 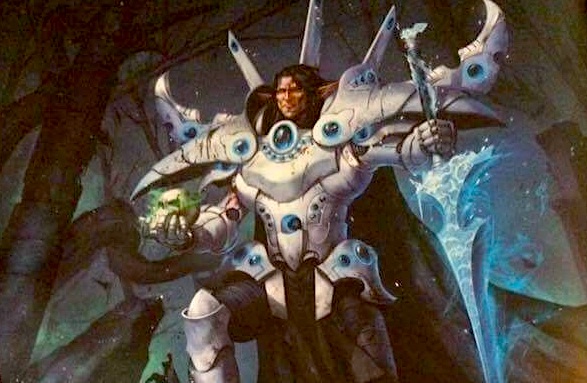 It has been a long time since I have personally been this excited about a war caster. The story of Ghyrrshyd facing down the council and going to extreme lengths to “save” Ios from itself has always left me yearning for the possibility of his goals aligning with the Retribution of Syrah or him coming back into the fold. I cannot wait to read the lore. 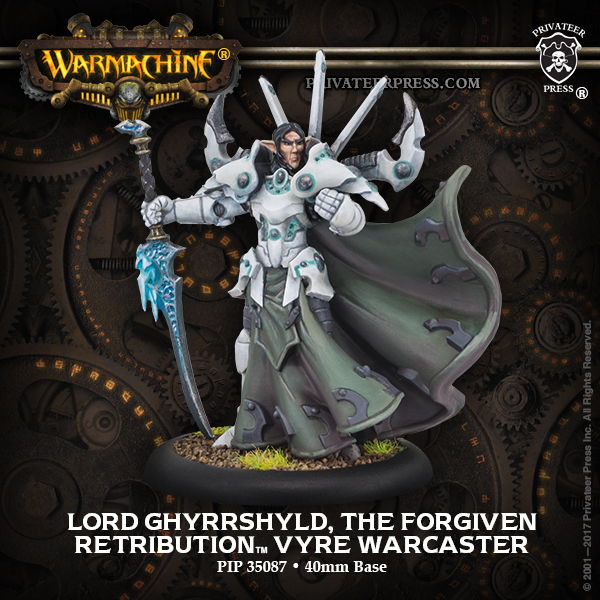 Abilities for Lord Ghyrrshyld, The Forgiven

Immunity Cold: Becoming more and more relevant as more abilities and feats target only models without immunity to cold.
Arcane Vortex: A smart player can keep their warcaster immune to spell assassination just by camping a few focus. A class A ability on any caster and no different here with Ghyrrshyld.
Field Marshal [Arcane Vortex]: Great field marshal ability and fits the retribution anti magic fluff. With the new arrivals of the Shyeel Arcanists powering up your jacks and having a large arc of no magic zones will be very easy to accomplish with out much resource drain from Ghyrrshyld himself.
Reversal: at defense 16 your opponents can miss and that stalker that just charged in and whiffed is now smack on his butt wondering what went wrong.
Snap Strike: Double the attacks for the focus.
Voass: Freeze. Do not underestimate his own personal assassination potential holding a MAT 7 POW 15 blade that causes stationary on first hit equates to if he can get there you probably will no live unless you are a Khador caster.

Gjyrrshyld is probably not going to kill you with Hex blasts alone but his bag of tricks plays very well in to the already tricksy elves.

Backlash: The large beasts have no fear making this favorable in niche situations but when they occur or if you build around this spell you can have a very safe assassination attempt or get the last few damage you need on a previously failed assassination run.
Frost Field: Arguably the best spell on his list, Retribution is not lacking for strong infantry options to apply this to. Although immunity cold does seem to be growing some it is still not common enough to be across from you in every match up. Lowering the defense of models with Retribution’s already elite infantry and strong jack stable will be devastating to opponents.
Ghost Walk: With 2017 Steamroller right around the corner and the direction terrain is playing in the game, the ability to ignore it is becoming more and more valuable. This is a solid spell to add to his already solid list.
Hex Blast: With our character arc-node Hemera this spell can be devastating. She allows you to reduce this to a two focus spell that strips upkeeps and can start striping the armor of the target.
Mage Sight: Steamroller 2017 best spell? With a center line of sight blocking terrain piece, the ability to completely ignore it is incredible. The ability to ignore stealth in Retribution’s gun heavy line up also is extremely powerful and will turn the tides on many of our more challenging match ups.
Revive: Strong spell and with our strong targets such as the new character unit Spears of Scyrah, it allows him to revive a shield guard or two every turn or bring back a pesky sentinel. 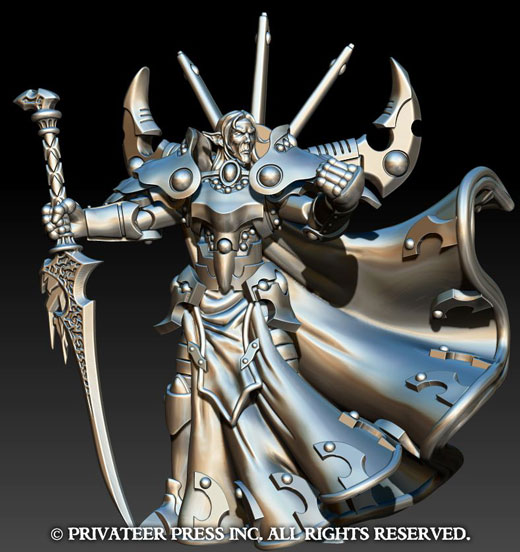 Hand of Winter: Immunity cold , concealment, and Freezer (Enemy models w/o Immunity cold become Stationary.). Solid weak feat, Immunity cold is becoming more relevant as more and more feats and abilities are triggered only if they don’t have it. The high starting defense of all of Retribution benefits greatly from concealment so no qualms there. Freezer with the new UA for the Ellowuyr swordsmen is a fun and potentially brutal combo coming in getting hit and then frozen if you don’t manage to kill them is very strong.

~What do you think of Ret’s newest caster?