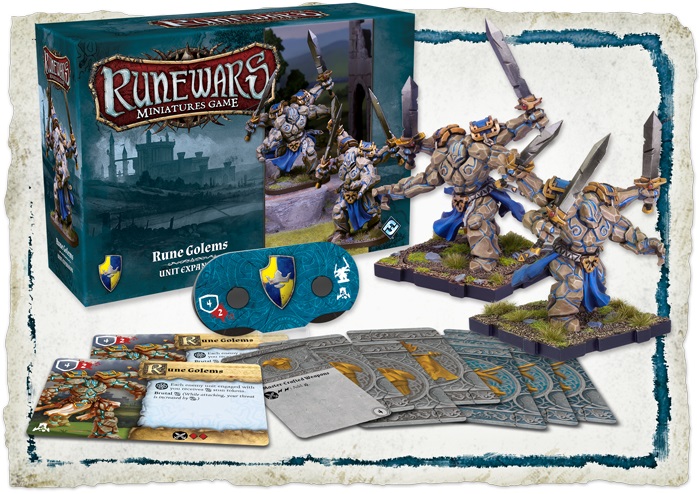 Come join the BoLS Crew as we take a look at the Rune Golems for Rune Wars.

Today’s video is a little rocky, but I think it turned out okay. Nothing? Just going to reply to that with stony silence? Well that’s fair. But, today we’ve got an unboxing of the Rune Golems Unit Expansion for the Rune Wars miniatures game. These guys are really cool looking–and they’re also an amazing unit.

These are my favorite model in the game right now. Between their abilities, stat lines, and aesthetic, they’ve got everything you’d want. I know that Rune Wars isn’t taking off quite as well as, say, X-Wing or Armada did, but they’re still growing. For my part, I think it’s models like this–things with unique sculpts that play up the high fantasy aspect of the world–that are where the game really shines through.

And with FFG’s “lock and key” or whatever it’s called construction system, these models are super easy to build. I want to see more of this–whoever their sculptors/designers are, they’ve got some real creativity going in models like these and the Carrion Lancers. They’re not the normal ‘standard fantasy fare’ but they’re still very much in tune with the world FFG’s building. Your mileage may very, but I think we’ve all seen elves and dwarves and stuff, give me crazy rock golems and giant-worm riding undead soldiers and I dunno, guys made out of fire or something!

Anyway, these are a great unit to include in any Daqan Lords list–they can hold down a flank on their own, or can be a wedge around which the rest of your forces can push through the enemy lines.

Deep within the ancient fortresses of Terrinoth stand ancient stone guardians, ever vigilant. Only awakened by Lords and Wizards who know the secrets that can imbue the golems with life when the need is dire. The strength and ferocity of these golems knows no equal, scything their massive blades through infantry and cavalry with ease.  Rune Golems will stop at nothing to destroy the enemies of the Daqan, and then return to their hidden slumber until called upon again.

Of course, you gotta watch out if someone tries to change the runes written on their forehead.