The Goblin Horde Swarms the Kings of War 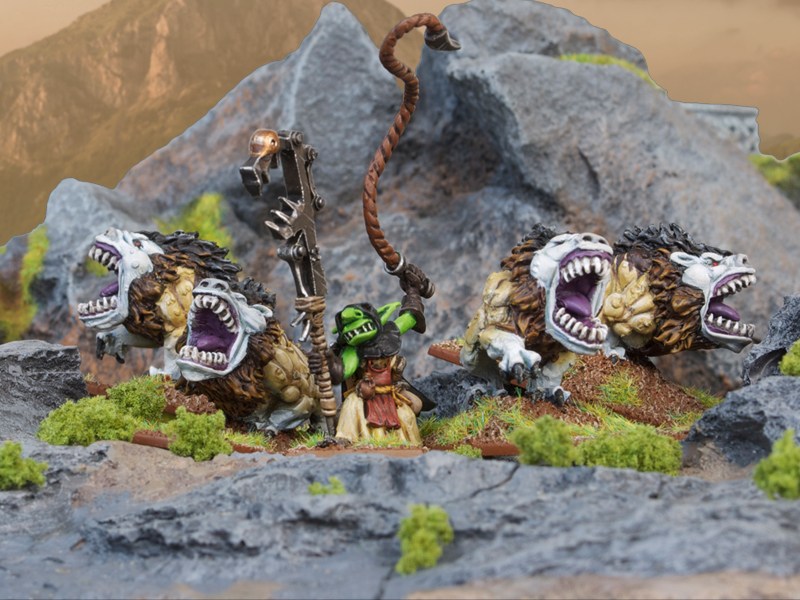 The Goblins are a numberless horde of rampaging leftovers, and now they’re swarming the world of Mantica.

Who are the Goblins? Though no one knows quite where the Goblins came from, it is believed to be from Garkan the Black not knowing what to do with the scraps left over from creating the Orcs. Their appearance as slaves in Orc armies and skill at crafting deadly weapons out of scraps seem to support this theory. Whatever their origin, Goblins are tenacious little creatures with snot green skin and snickering smiles as if the whole world were a practical joke.

By and large, the Goblin races are found in slave pits. The Orcs drive them before their armies as cannon fodder. The Abyssal Dwarfs use them to grease the wheels of their terrible forges. Humans mostly round them up and chop of their heads, “cleansing the country side” as they call it. Some Goblins, however, manage to escape the fate of their brethren. Many tunnel beneath the earth, building whole kingdoms and societies within the dark places of the world. As long as they are careful not to dig too close to Tragar or the Dwarfen mountains, they can survive mostly undiscovered.

In these Goblin bastions, the truth strength of this vile race comes to the fore, their insidious engineering skill. Goblins do not craft pristine well-oiled machines like the Dwarfs. They lack the focus to truly turn their ideas into reality and have no patience for prototyping or safety regulations. Instead, an idea will seize hold of a Goblin tinkerer. They will grab at whatever is nearby, shoving pieces together in strange and unnatural ways in a mad creative burst. The end result is either the would be inventor’s untimely death or a weapon that makes armies flee in terror. When driven to war as an army of their own, not as slaves in another, Goblins march as a single seething horde with little order to it. This horde is the only way they can overcome their inbred cowardice. As long as each Goblin has two dozen of his kin around him, he has a statistically better chance of surviving while they all die. Unfortunately, as they die, his chance of death rises as well and if the enemy does not die quickly, he will run.

If a goblin army does not have overwhelming numbers, nine times out of ten it will retreat. The only time they will actually fight in such a situation is if they have both an incredibly charismatic commander and nice lots of pointy armoured bits. The extra amour, shields, and preferably ranged weapons or terrifying pets can trick the Goblins into thinking they are invulnerable, though it takes little to disabuse them of this notion.

For whether in a horde or armed to the teeth, Goblins die quickly. Their only saving grace is that they breed faster than rabbits. Hordes will teem out of their caverns and villages. No one knows quite how many Goblins plague the world, but some sages believe that if the population is left unchecked the world could face another great flood. This time, however, it will be a flood of shrieking green Goblins. Goblins are the eponymous and classic horde army. “The goblin horde” can refer to the entire army and also the typical unit size players will field. What goblins lack in strength and bravery, they more than make up for in sheer numbers. That’s not to say they do not lack a bite however. Giants and trolls are often lured into joining the tide of goblin warriors while fleabags and mawbeasts are goaded into fighting or being ridden into battle. A goblin player is expecting numbers to win them the day (with the odd rock chucked in from a safe distance for good measure). The usual goblin rabble armed with a variety of pointy weapons form the heart of any army in large blocks of sneaky, skittish warriors. Ponderous but solid trolls and giants make their way between the ranks (probably unaware of what they trample underfoot) while down the flanks, the lightning fast fleabag riders and mawbeast packs rush forwards to harass the enemy and throw them off balance. The goblins have access to some crafty war engines like the short range war-trombone and the aptly named Mincer. Goblins don’t have too many hero options(possibly reflecting the fact that not many are brave enough to be considered heroes!) but they are a cheap and useful presence in the army.

If you want to enslave Mantica for your own wealth and gain, you can use the code GOBLIN10 to receive 10% off the Goblin Army, Mega Army and Raiding Party on the Mantic website.

Down down to Goblin Town you go my lad! Ho ho my lad!