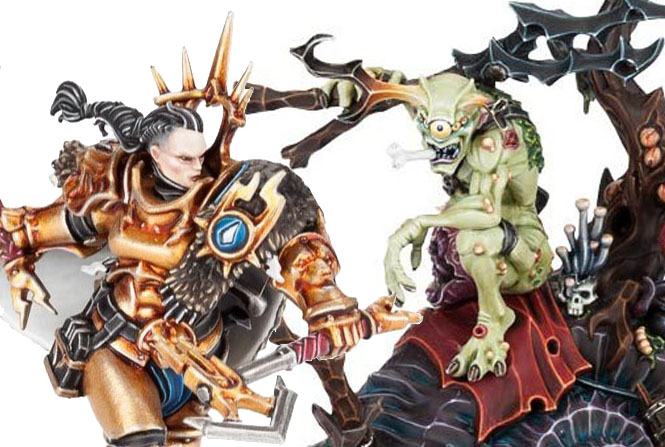 Today, we shall take a detailed look at two of the craziest minis GW has produced of late – the stars of Blightwar.

Everyone says GW makes some of the best minis around. Today I want to take a look at two of the newest and see what makes them tick. 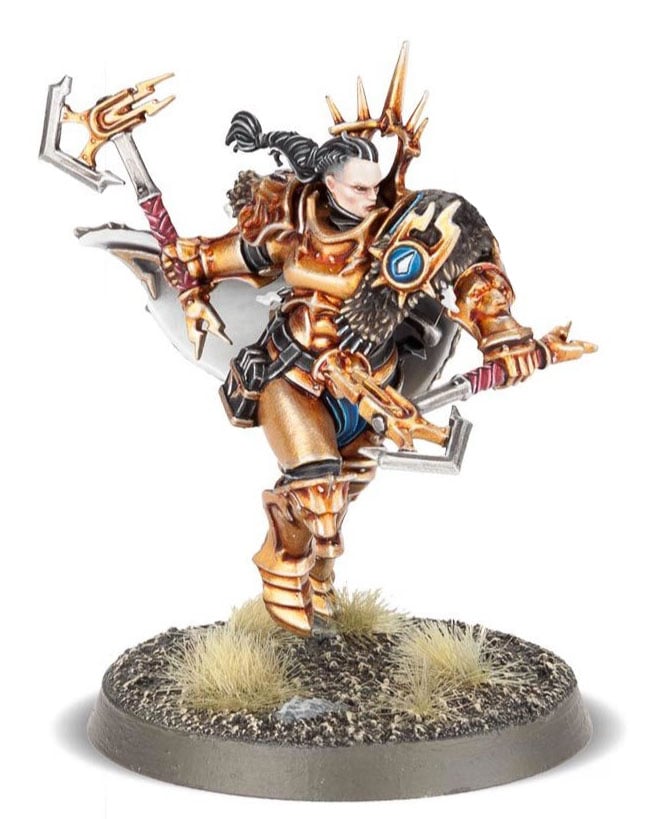 Neave Blacktalon – from the Knights-Zephyros. She is armed with Whirlwind Axes, and a Boltstorm Pistol. While the Stormcast look is now quite expected, here we see GW pushing it in a new direction. A female direction.  We’ve already seen another female Stormcast mini, Angharad Brightshield from Shadespire who is incidentally armed completely differently as a Liberator.  We see the same Stormcast themes of large curving armor shapes, lightning and animal motifs, and weapon designs taken from other minis. The mini has a fast action packed pose, and in a rarity, a helmetless option. Looking over the contents of the Stormcast Eternals battletome – there is no mention of any “Knight Zephyros” order or unit. However Neave is armed and equiped quite closely to the Vanguard Hunters. What I most like about Neave is the no-nonsense vibe the model gives off. She’s there to do a job and she’s gonna get it done. There’s no cheesecake, uber-boobs, string bikini nonsense or knock-knee posing.  I like what I see and hope GW gives us not a cliche all-female unit, but instead just add a female model here and there to all future Stormcast units. An integrated Stormcast Eternal force with both genders mixed in makes a greater reflection of mankind’s eternal champions, than having the ladies off the side on a pedestal.

Welcome to the insane Garden of Nurgle. I’ve seen a lot of funky Nurgle minis over the years from the Beasts of Nurgle to the awesomely odd Glottkin, but this guy here is the cutest.  Just look at some of these details:

He’s chewing on a bone

He’s got a little metal kettle with a “Feed me Seymour” plant in it.

He’s riding a Garden Snail of Nurgle (kind of)

He’s using it to pull a plow.

He’s got a skull growing a bunch of mushrooms back there.

He’s got a giant pair of garden clippers.

He steers the snail with a dangling Nurgling who seems kind of cool with it.

Heck, the snail seems kind of cool with the whole thing too.

This miniature is just utter hilarious insanity.  I love that you can get variety in tone from the “ultra serious scary” Skarbrand all the way over to this guy.  It shows not only the breadth of what Chaos can be, but a confident GW design department who can put out something like this.  Nurgle from his earliest days has always had a contradictory circus ringleader-crazy family-grandfatherly love and affection vibe totally at odds with the corruption and grossness. It’s one of that aspects that makes the entire Nurgle concept and visual range so fun.

I was really hoping to get a massive Nurgle Siege Tower and instead I got a daemonic gardener riding a snail.  Yet somehow I’m even happier.

~What do you think of the mini designs and where GW is going?