Build Rome (or France, or the Byzantine Empire, or whatever) in a day. Take a look at the upcoming new Civilization board game from FFG.

Get ready to learn the true terror of the phrase “just one more turn.” It is an inescapable indicator that you have crossed the event horizon of a game that grabs hold of you and refuses to let go, pulling until the weight of gravity is such that your body is pulled and stretched into a thin strip of matter, inexorably falling towards an all-consuming void.

Also there’s a new Civilization Game that will be out soon from FFG.

Based on the hit video game Sid Meier’s Civilization, Civilization A New Dawn brings the classic experience to the tabletop. Now, astute observers will note that this isn’t the first time we’ve seen a Civilization board game, nor even one from FFG–but this one draws on the latest iteration of the game and offers up a much more expansive experience. 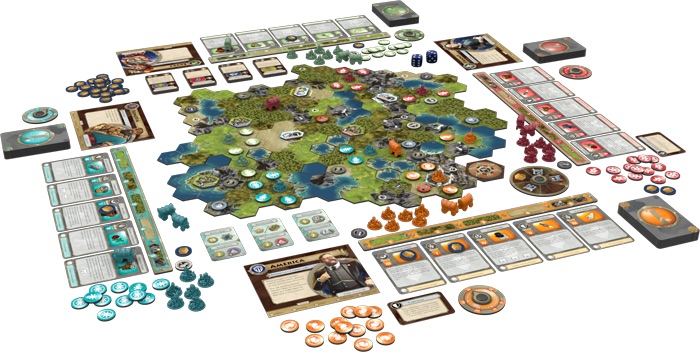 As you can see, the game returns to form with Hex-Based Map Tiles, which we all know are the sexiest of all tiles to be on a map. Players will collectively build the map, populating it with barbarians, resources, and all the other incentives for exploring the world map that you’ve come to expect from a Civilization type game. Periodically barbarians will spawn and maraud across the map, so players will have to be prepared to deal with them–as well as each other.

Speaking of the other players–as you might be able to see from the big cards lining the side of the board there, each player will take on the role of a great world leader at the head of a Civilization, like Theodore Roosevelt (America) or Emperor Trajan (Romans). Each civilization gets its own card that defines its priorities, goals, and special ability.

Lined up across the bottom of each card are a few goals, and slots that represent more time being invested in various projects. These five are the first few set up according to the different factions, but the cards will shift around over the course of the game. 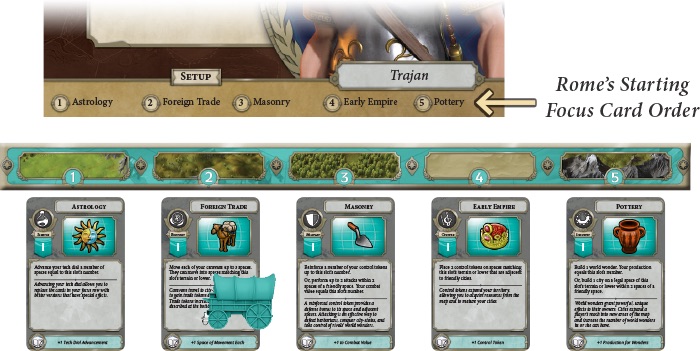 Cards will have more of an impact depending on which slot they’re resolved in. And as you might expect, there are different ways to win the game. At the setup of each game, you’ll have different victory cards that rely on players accomplishing various items on that card. And of course, it wouldn’t be civilization if you couldn’t build and upgrade units to achieve success–and there are plenty of opportunities to do that as well. 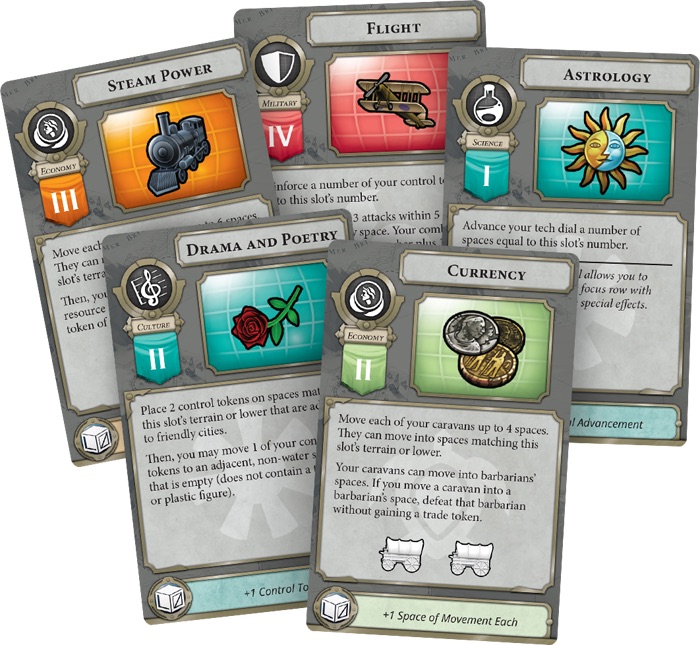 FFG has said that they want this game to have Civilizations interwoven with one another. You won’t be able to play the game without interacting with other players, things like trade and economy, and cultural development will play a huge role in the success, and players will quickly find that being insular will severely hamstring a civilization’s ability to seize victory. Kind of like in real life civilizations. At any rate, this game looks incredible. Contending with players, barbarians, and all kinds of other in-game events should be fun. But it’s the kind of fun that if not careful can lead to just one more turn. And then just one more game. And then, as we cautioned, spaghettification.

It seems they wisely left Ghandi off the roster…nobody needs to have that many nukes.