A little bit of fighting, a little bit of heroics. One thing’s for sure, it never goes smooth in GF9’s new Firefly Game: Brigands and Browncoats.

There’s a new Firefly game coming from Gale Force 9. Set in the Eavesdown Docks on Persephone, Brigands and Browncoats is a skirmish game where players take on the role of some of the crew of the most (in)famous Firefly-class transport in the ‘verse, the Serenity. Dress up Vera and take her someplace nice. Watch Kaylee work her magic on machines and flirt almost hopelessly with Simon. Though, from what I’ve seen of the minis, it looks like neither the Tams, nor the other erstwhile passengers of Serenity (Shepherd Book and Inara Serra) have representation here–yet.

The mechanics of the game look like they get pretty intricate. You’ll face off against thugs and cowboys as you just try and get the job done so you can get paid. There’s a cool mechanic where your crew members can Act Casual or Heroic and it influences how the game reacts to your characters. It looks like there’s a time-based mechanic, so it’ll take your whole crew acting in concert to get the job done. The game is for 1-5 players (for now), but there’s nothing stopping you from acting out what’s going on with the other characters in a delicious B-Story arc. At any rate, this game is set to be out in Mid October of this year, so get ready.

Firefly Adventures: Brigands and Browncoats is a cooperative, mission based, skirmish-level game where the players use the different skills and abilities of Malcolm, Zoë, Jayne, Kaylee and Wash to succeed. The game contains two distinct miniature game pieces for each crew member, one in Casual relaxed pose, the other in a Heroic action pose. Crew may choose to Act Casual or Act Heroic and each pose has a unique set of actions that the Crew can perform on their turn, but be warned – while no one’s gonna pay much mind to someone with a casual demeanor, acting all heroic is sure to attract unwanted attention.

When you and the Crew get to work, a Job Briefing will tell you all you need to know; what your Crew needs to accomplish, how they might succeed and how long they have to get it done. Some Jobs are easier and faster, some are longer and more involved. What type of Job you want to tackle is up to you. You can work a single Job, or a series of Jobs, using the Credits you earn from one Job to equip the Crew for the next Job.

Working a Job is never easy, there’s always some manner of malcontents standing in your way. You and the Crew are sure to run afoul of hired Goons, whether it’s a posse of unruly Cowboys or a gang of Eavesdown Docks Thugs. Depending on the circumstances, you may be able to talk your way out of trouble or distract them with some technical know-what. If not, then the situation may require a bit of violence! Brigands & Browncoats includes ten unique detailed Goon game pieces; five Cowboys and five Thugs.

The setting for Brigands & Browncoats is the rough-and-tumble Eavesdown Docks on Persephone. The game includes unique double-side map tiles and a collection of 3D buildings to create the world for your games. Take cover around the corner of a container building to avoid a hail of incoming fire or squeeze down a narrow alleyway to avoid wary Goons. Will the Crew be able to break into the secure building and get out with the loot in time? 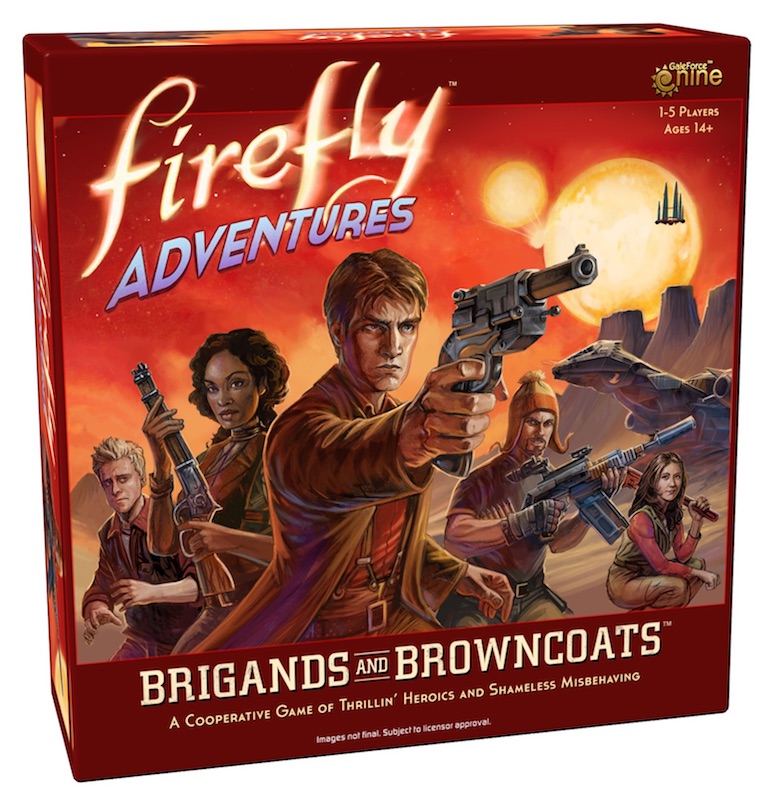 Firefly Adventures: Brigands and Browncoats contains everything you need to play, 20 unique miniatures, equipment cards, hero cards, goon cards, skill test cards, map tiles, 3D building terrain and dice. In the future, the ‘Verse will continue to grow expanding your Crew with some notable passengers and persons while facing off against new opponents standing between you and your

Also included with the box: a chain of command for helping to settle rules debates.