Today we are thrilled to announce that the new HeroClix rules have been made available to players on HeroClix.com. This includes:

Why are the New Rules Important?

The new rules make it easier for new players to learn how to play HeroClix!

This is great for new player acquisition…  The new rules have also been streamlined for existing players, bringing about change that veteran players have been longing for.

What Does this Mean for Previously Released Figures?

Please note that all previous figures are compatible with the new, modern rules.

In addition to the new rules postings today, we also made the 2017 Powers and Abilities Card (PAC) available online as well! Curious about what the key changes are with the new PAC? The fine folks at Tabletop Teacher have made a thorough video outlining these changes. 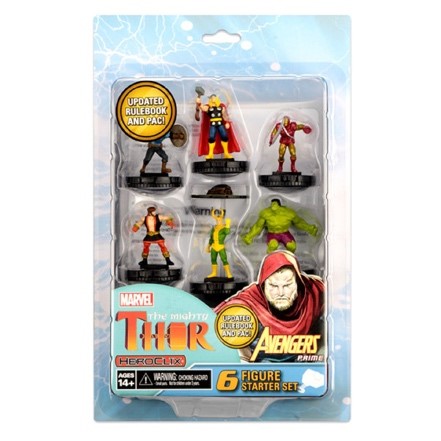 Physical Products that Include Copies of the Rules

The Marvel HeroClix: The Mighty Thor Starter Set (SKU: 72683) is the first-ever starter product to include the all-new 2017 HeroClix Rulebook, which features updated and streamlined rules for HeroClix play. This new starter set comes with everything new and established Heroclix players need to play, including six all-new HeroClix figures, one double-sided map, the 2017 HeroClix Rulebook, a Powers and Abilities Card (PAC), Object and Terrain tokens, Dice, and Character cards.

Other Resources Stores Can Use to Help New Players

~So how many of you play or got into minis with HEROClix?

Author: Larry Vela
Dad, Gamer, Publisher, Pilot, Texan. All games all the time since junior-high. I started BoLS Interactive in 2006. I’m a lifelong tabletop & RPG gaming enthusiast, and internet publisher working to entertain and inform my readers every day. I've been playing RPGs and Tabletop Games since the 1970s. I'm been playing and covering Warhammer and Warhammer 40K for over 35 years.
Advertisement
HEROCLIX Rules Tabletop News
Advertisement