Take a look at the leaders of the Adeptus Mechanicus.

When you think HQ choices for the Adeptus Mechanicus, you’ve got three options. First up, the big star of the bunch, everyone’s favorite blend of Blondie and Genetic Experimentation for 10,000 years. Primarily known for the Primaris and Primarch, we’ve got the one, the only, Bellisarius Cawl (me, on the line). 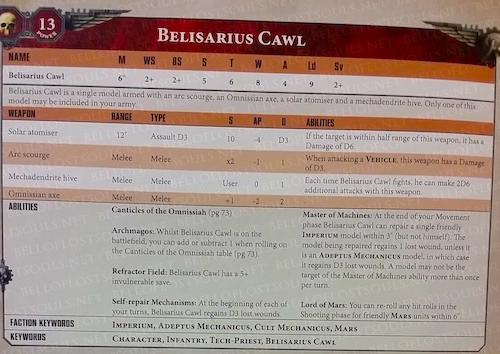 Belisarius Cawl has been working for 10,000 years to change the Imperium. He’s sort of at the center of the maelstrom when it comes down to the events going on in the Imperium. And though he hasn’t really changed from his incarnation in the Imperial Index, we would be remiss not to include him. He combos fairly well with most units–accompanying them and repairing them to ensure that whatever big heavy thing is up there is at full strength. Of particular interest is units that really benefit from the Canticles of the Omnissiah. Cawl’s ability to manipulate the roll for the Canticles coupled with Mars’ ability to roll twice when choosing the Canticles randomly means you are that much likelier to always have the ability you need to. So whether it’s making sure you are rerolling 1s or always being in Cover, Cawl has got your back.

And probably replaced it with some kind of duranium core.

The other big option available to the Mechanicus is the Tech Priest Dominus. 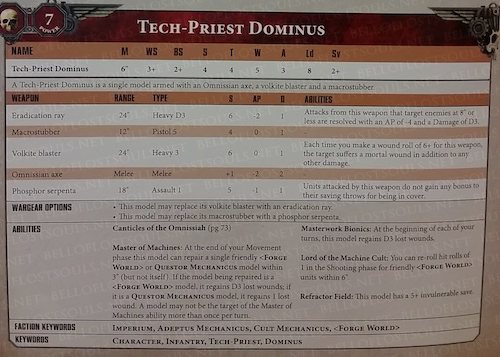 A slightly longer ranged HQ, the Dominus is always going to hit pretty hard with whatever weapons he’s firing. He buffs units around him and functions much like a shootier Cawl. The Dominus lets you get flexible though. So you can sort of sculpt your Warlord to fit whatever you need. Whether that means taking one of the Forge World specific traits–like the one that lets your units fall back and still shoot, or the one that increases your Invulnerable saves.

You can get a lot of mileage out of your Dominus when picking Warlord traits that play well with your chosen Forge World dogma. I know some people like the close combat Dominus, loaded down with relic weaponry, but I tend to prefer giving them Necromechanic, which lets you repair a friendly model for d3+1 wounds–combo that with some Dunecrawlers to keep those Eradication Beamers firing at full accuracy as long as you can.

Finally though, we have the new kid on the block. Sort of. The Tech Priest Enginseer gets an upgrade, so that now even the Ad-Mech have a discount warlord available to them. 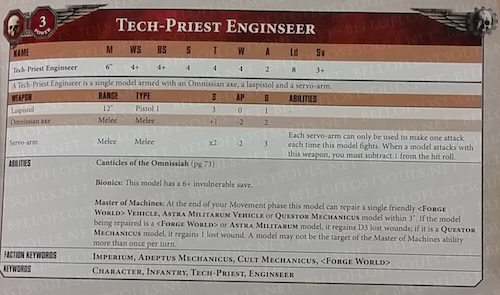 The Enginseer is also largely unchanged from the Index. The difference is that he’s now an HQ choice and only costs 3 power rating or 52 points, wargear included. And again, you can still give them Warlord traits–so load ’em up with a support ability and you’d be surprised at how much more effective your important stuff will be. It’s tricky getting them where they need to be–there aren’t any good transport options native to the codex, but that’s what the Imperium Keyword is for.

Anyway, just a quick overview of the HQ of the Ad-Mech to kick off your weekend.

HOBBY: The Bigboss' Week of Blogging #140 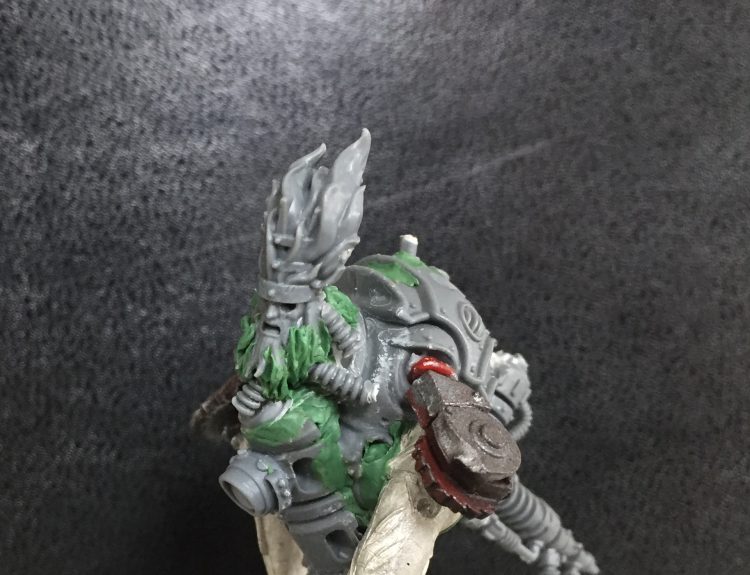