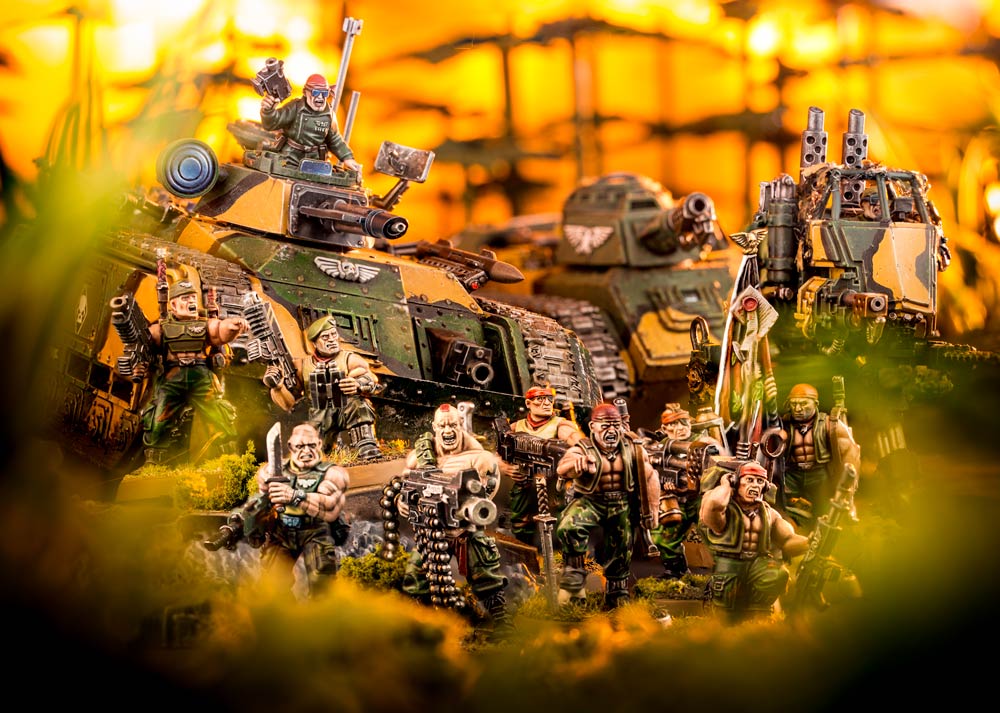 Welcome to the Jungle! Games Workshop takes a closer look at the regiment of 80’s action starts known as the Catachans!

The jungle fighters of Catachan are getting their own Regimental Rules in the upcoming Codex: Astra Militarum. Along with 7 other regiments (for a total of 8), the Catachans are going to have their own unique Regimental Doctrine which will functions similarly to Chapter Tactics, Legion Traits, and Forge World Dogmas. Today, Games Workshop is showing off what the Catachan Jungle Fighters can do: 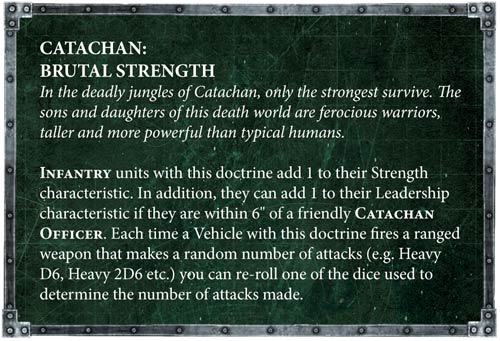 First off, +1 Strength for all Infantry units…I mean, have you SEEN a Catachan!? All we can say is that it’s about time. Those guys are RIPPED. They also get +1 Leadership when they are with 6″ of a Catachan Officer. That also makes sense – you gotta show off when the boss man is around. However, the real kicker here is the Catachan’s Vehicle boost:

Okay – that just made Catachan Leman Russ Battle Cannons a LOT more reliable! Don’t forget the plethora of weapons in the AM motor pool that use “random number” type weapons…Even the BIG ones like a Baneblane or Shadowsword!

Games Workshop, like a good sommelier, has a couple suggestions for pairings with the Catachans. The Deathstrike Missile comes to mind.

Note: These are the rules for the Deathstrike from Index: Imperium II and may or may not be the same in Codex: Astra Militarum

We can see how the interaction is going to function between the Brutal Strength re-roll and the Heavy 3D6 shots. You can also spend a Command Point to re-roll a second dice if you need to. Each hit causes a Mortal Wound so you’re going to want to get as many possible hits in as you can. Again, like a good sommelier, GW also has yet another reason these two great tastes go great together: Vortex Missile. 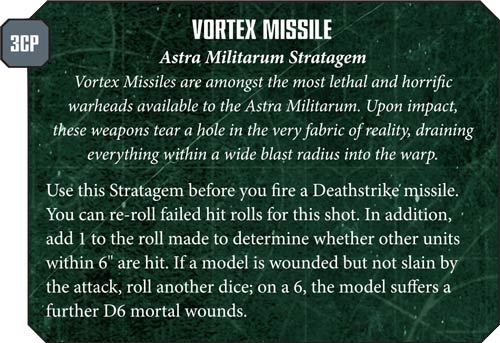 Were you worried about whiffing with your Deathstrike Missile? Did you have the perfect target lined up and wanted to ensure maximum carnage? Make sure you save the 3 CP to use Vortex Missiles then! This one allows you to re-roll failed hit rolls for your one-shot Deathstrike Missile. You also get to add +1 to the roll to see if other units within 6″ are also impacted (changing it to a +3). And just for kicks, if the target somehow survived, roll another d6 – if it’s a 6, then the models suffers an additional D6 Mortal Wounds!

Games Workshop also mentions using Command Squads in their full round-up – it makes sense as it spreads that leadership bonus around. Plus you can load them up with 4 flamers and a heavy flamer so you can go around burninating the enemy. That’s a pretty mean unit to try to charge as well. And lets just say you DO charge them – the Catachans are known as Jungle Fighters for a reason! They fight dirty and use the terrain to their advantage with Vicious Traps! 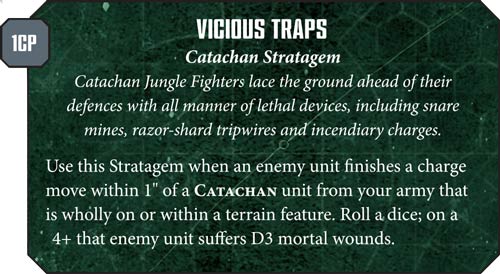 Now, this one is pretty situational: The entire squad has to be in a terrain feature, it costs a CP, and it only triggers on a +4. But it’s D3 Mortal Wounds and if you get lucky, that’s going to weaken a squad just enough to tip the odds in your Str 4 favor!

That’s all for the Catachan Regimental Focus, but we do want to call out a few other things in the article worth noting:

Every Regimental Doctrine applies to both your infantry and vehicles, meaning whether you’re marching with the Mordians or claiming victory for the Valhallans you’ll be able to do so with the army you want to build.

Mordian Iron Guard, a regiment designed to excel at defensive order – and equipped with a unique order that’ll spell doom for any enemy looking to exploit the seeming safety of characters.

That leaves a few things we can infer/speculate on:

We’re going to see more and more as the week goes on! Get ready for the Astra Militarum to rumble to a tabletop near you!