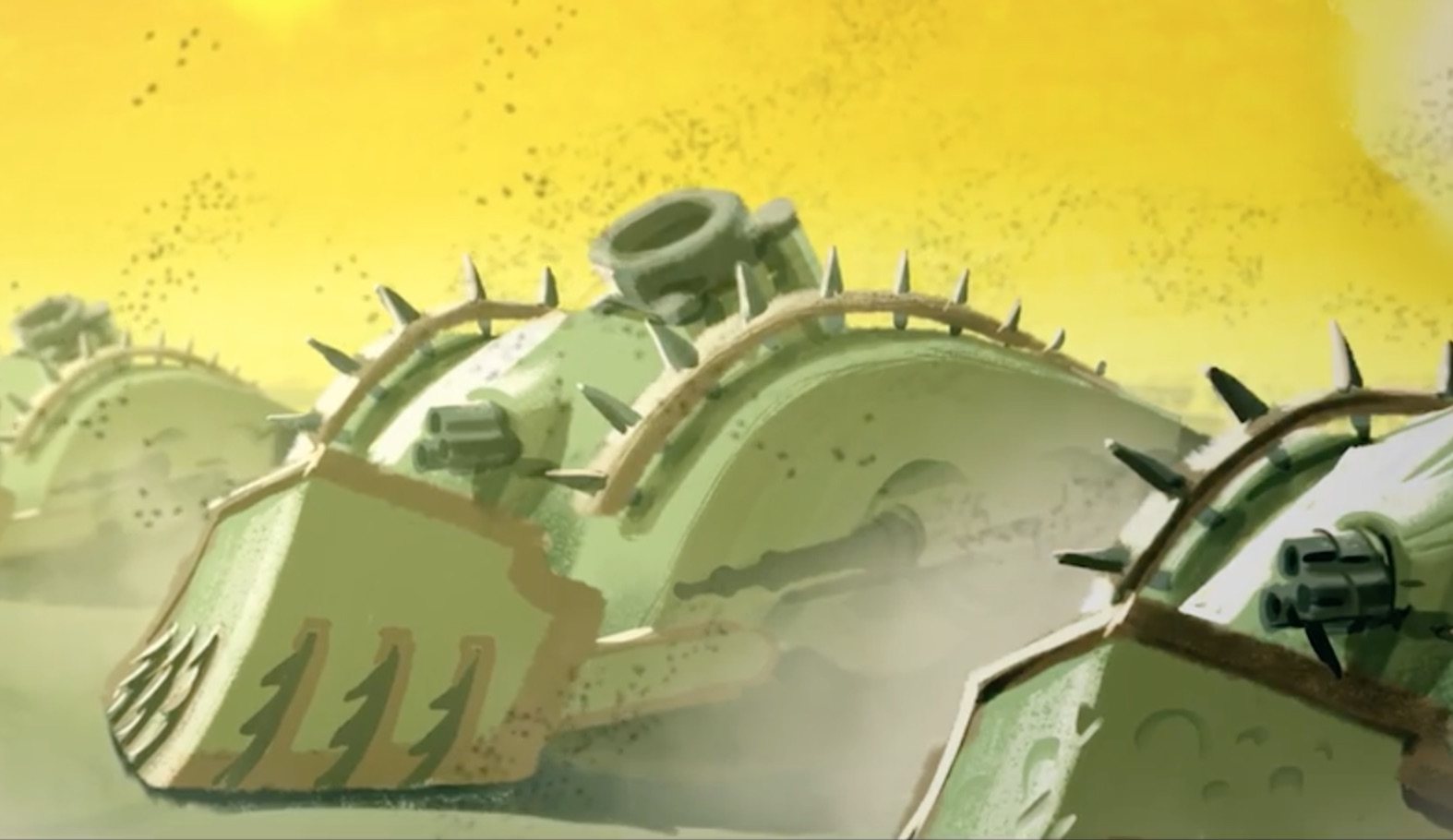 What if a Nurgle took the DNA from a Basilisk, a Predator, and a Vindicator and added some snot – I think we’d have a Plagueburst Crawler…

When pictures of the Plagueburst Crawler rumbled on the scene Death Guard players around the web let out a collective squee (or was it another bodily function…) because they were pretty excited to get a new toy to play with. This new “tank” was much different than previous vehicles and very different from the Foetid Bloat-Drone teaser as well. 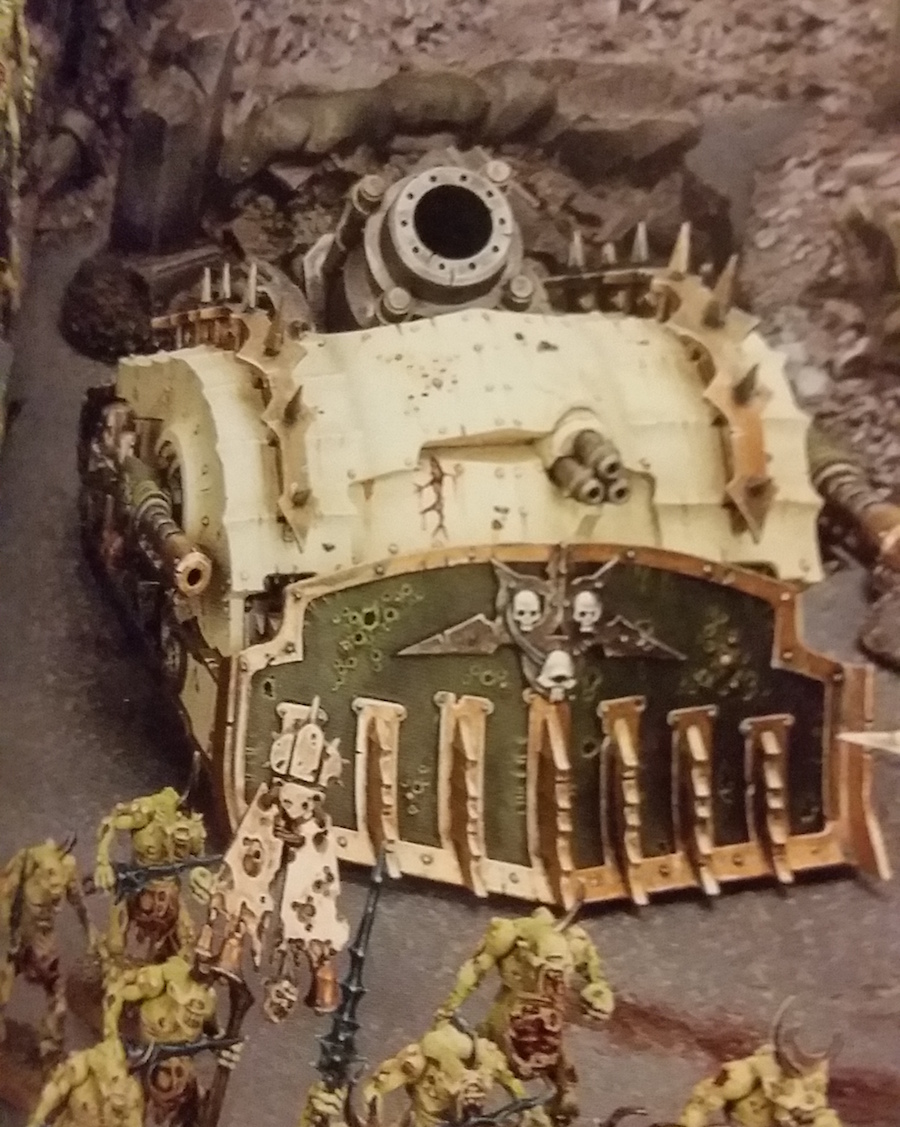 The Plagueburst Crawler has launched a thousand nightmares already – and it’s not even out yet! Today, I wanted to take a closer look at this vehicle and see if we can’t figure out some more info about this new “Beast” of Nurgle’s crew. 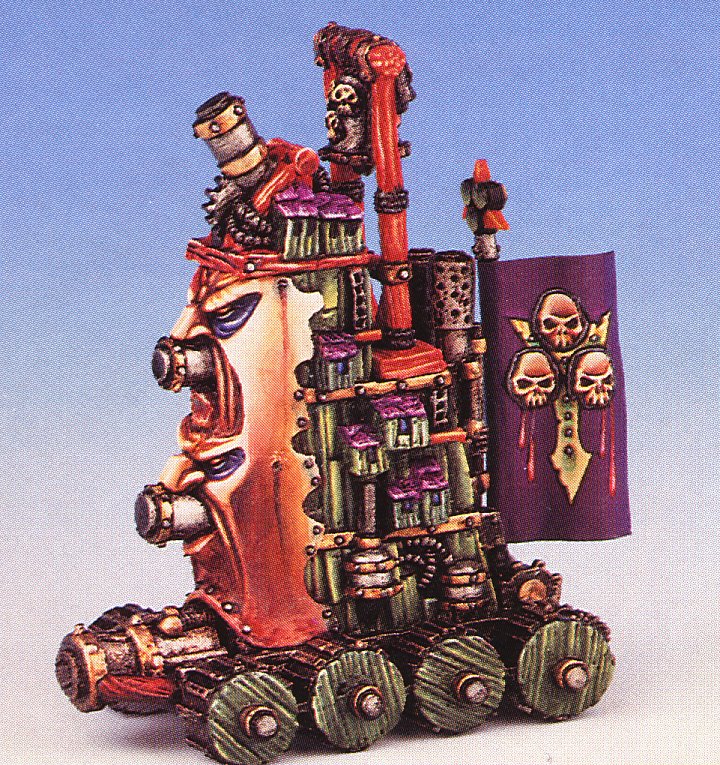 The earliest “Siege” weapon we could trace this one back to was the Nurgle Plague Tower.

Nurgle Plague Tower is a very powerful Daemon Engine dedicated to Nurgle. This foul construction is a medieval siege tower reborn as the enemy’s worst nightmare.

Only the suicidal would dare to attack the Tower in close combat. Not only is the tower defended by swarms of crazed Nurglings but should attackers succeed in destroying the tower they are likely to be drowned in an explosion of pus and filth as the Daemon-machine dies.

Obviously, there are some similarities or at least some shared DNA from this long-lost cousin. But now that we have a sense of where the Origins of the Plagueburst Crawler might of come from, perhaps we can use that info to help deduce some of the weapons/powers of this new incarnation.

The basic hull of the Plagueburst is different from most standard Imperial chassis designs. Check it out compared to a Rhino: 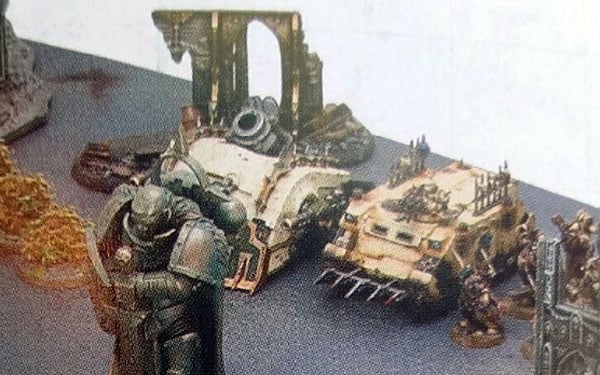 It’s bulkier, rounder and also has a siege shield. And we can’t tell from these pictures, but could it also be open-topped?  It’s a very curious design indeed – it doesn’t look like it’s built for speed but rather for durability.

Another question we have is what battlefield role this tank will fill. Will it be a long range Artillery Piece? An up close and personal line breaker? Let’s see if we can’t look at the guns to find out…

On the hull of the tank we can see 4 weapon so far:

Given that the name of this tank is a “Plagueburst” Crawler – I’m betting the name of the Mortar is where this tank derives it’s name from. However, it’s a Mortar and we know that those typically do things like ignore LoS firing restrictions. We haven’t seen too many weapons with a minimum firing distance but who knows – indirect weapons aren’t known for their close range targeting after-all. Here’s an example of an Imperial Mortar:

Will this “Plagueburst” Mortar have a similar profile? Possibly. No minimum range, however. The Vindicator (on the other hand) hits a bit harder:

Perhaps this Mortar will take a bit of both. We’ll have to wait to find out.

The Tri-barrelled weapon on the front looks very similar in design as Inquisitor Karamazov’s Melta Weapon: 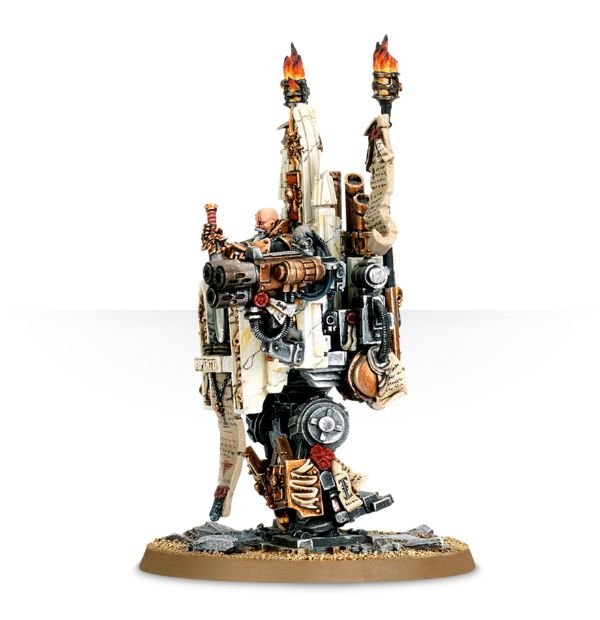 Will this just be another Melta-type weapon? Well this tank does look like it’s designed for some close-support action – but that doesn’t really pair well with a Mortar, does it? Maybe it’s just a multi-barreled ballistic type weapon. Like a Chaingun or something along those lines.

The Sponsons on the Plagueburst Crawler look like they could be Lascannon type weapons. Then again… 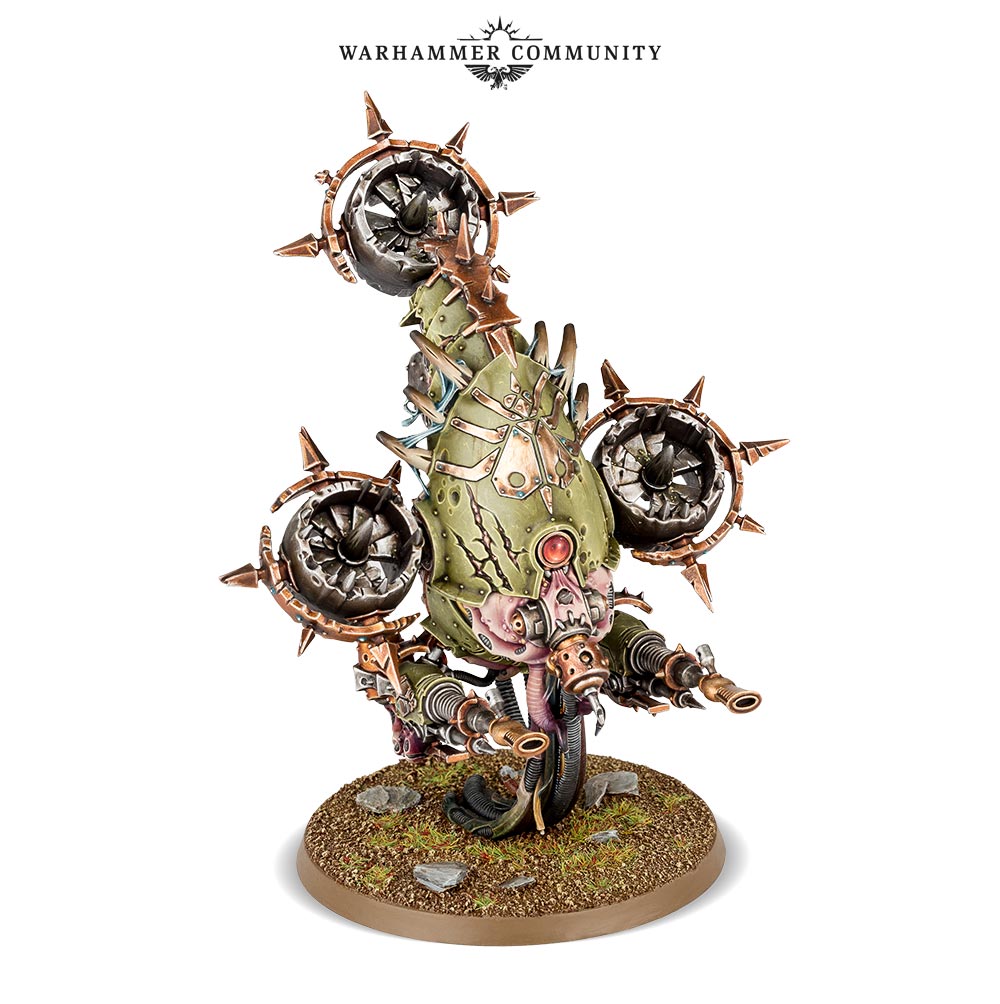 They look like they also have some similarities to the blight drone’s weapons. They look like they have similar coils and the pictures are a bit distorted so it’s hard to tell with the barrels, but they might be slightly slanted as well. It would be interesting if the Sponsons weren’t just Lascannon – or at least had the option for something else.

If they are Lascannons, then this tank is definitely going to be a long-range support platform. But if they aren’t – then maybe they are similar to the Plaguespitters that the Blight Drone has – and if that’s the case, it further supports the argument for a close-support vehicle.

What’s up with the Siege Shield? Will that have an in-game effect or will it just be for looks? Maybe it will ignore terrain movement penalties…for charging? Hmm…Maybe it’s just more toughness or wounds. Or maybe it’s extra attacks in close combat. Who really knows (besides GW, of course).

Will The Plagueburst Crawler be a Daemon Engine? If so, then that means it will also have a ++5 save, just like other daemon units. Bight Drones have the same ability after…

The stat-line on this tank will probably degrade as it takes damage. It’s still a vehicle after all and that’s been a theme in 40k.

Movement – I’m guessing it will probably be slower than a Rhino based on the armor. Plus Nurgle isn’t known for their speed. I’m guessing a 10″ base degrading down to 5″ or something similar.

S – The Chaos Vindicator has a base Strength of 6. I wouldn’t be surprised if it was in the same neighborhood.

T – This one is tricky. It’s probably on par with the Vindicator who also has an 8, but it’s Nurgle…If it has some of the abilities mentioned above, then I’m guessing it stays at 8. If it doesn’t… well maybe it’s just more wound and not Toughness 9 or 10. Regardless, most stuff is going to wound this on a 5 or 6.

W – A Vindicator has 11 Wounds. I really hope it doesn’t have a 9 toughness, but it’s Nurgle so giving it an extra wound over the Vindicator seems like a good compromise.

A – The Vindicator has a degrading Attack stat which starts at 3. Maybe this tank will be in the same ball park, too.

Sv – +3. It’s definitely going to be in the same ball park. A 2+ wouldn’t be shocking, but that would put it Chaos Land Raider Turf. A +4 could also work if it was “open topped” as a tank.

Well Death Guard fans – what do you think about this new Plaguecrawler? Any thoughts or things we missed?

Author: Adam Harrison
Writer, Editor, Texas Native, and Austinite for 15+ years, Adam covers all things Tabletop Gaming. Which includes Warhammer 40,000, Age of Sigmar, D&D, Board Games and everything else that involves dice, boards, cards and a table. A hobbyist, player, and collector of miniatures and games, Adam's current obsession are his Death Armies for Age of Sigmar, his Blood Angels and Tyranids for 40k, and his ever growing Arkham Horror: The Card Game Collection.
Advertisement
Chaos Marines Death Guard Games Workshop Miniatures Tabletop News Warhammer 40k
Advertisement

GW Resets the Squat Clock Themselves