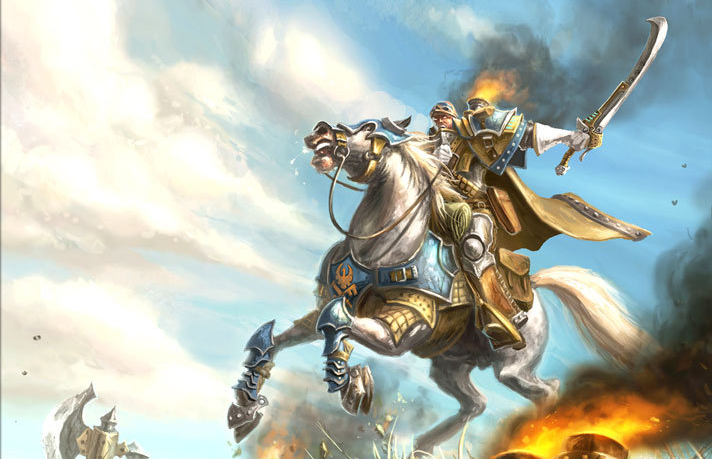 MKIII took a toll on Kraye, he didn’t see much light of day. But no longer.  Come check out the errata rules for Kraye!

MKIII took a toll on Kraye, he didn’t see much light of day with clunky rules and high cost spells on a low resource caster.  Captain Jeremiah Kraye was stuck trying to do to many things.  A fluff that tries to be the emblem of hit and run and scouting but, with only Focus 6 you can’t run to many jacks on a jack caster and cast high cost spells.  This was what Kraye was left going into MK3.  Very clunky and hard to use.  But, his head popped up in the CID forum and hope was seen at the end of the tunnel.  Now Kraye is streamlined to be the hard hitting long distance caster of yesteryear. Lets take a look at Kraye 2.0 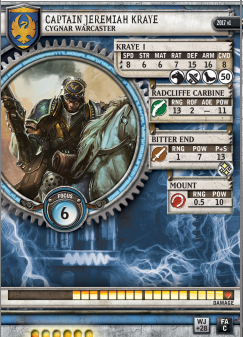 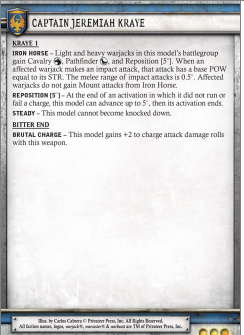 As you can see not only is Kraye a little tankier with ARM16 he also is now STEADY which makes him a really hard target to take down.  With Reposition 5″ he can get into position to shoot and cast important spells while slinking back to safe positions at the end of his activation. With a RNG13 gun and SPD8 he can really threaten deep with 2 shots at RAT7 POW11.  This also synergies well with his feat that makes those shots even dirtier.  The bread and butter though has always been the Iron Horse rule.  Giving his warjacks the cavalr rule.  It has been improved greatly with the addition of PATHFINDER.  No longer are you casting a costly spell to get a 1 or 2 focus jack through some rough terrain to hopefully finish off the enemy.  Your jacks just now have pathfinder!  This is a huge edition to his battlegroup! 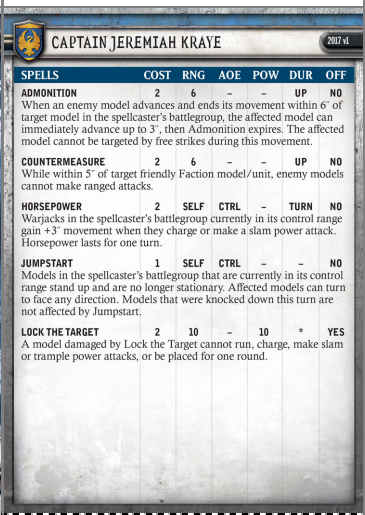 Cygnar and Admonition is finally a thing!  This is a really powerful spell on a battlegroup that is extremely mobile.  A Centurion can Polarity shield and advance 4″, Reposition 5″ and then Admonition away from anything that can charge or threaten its rear arc.

Countermeasure has been classically Drake McBain’s spell but now he is sharing it with Kraye.  This can be a annoying spell on a unit of Kayazy Assassins but, cygnar doesn’t have those really annoying to remove infantry.  I couldn’t pick a favorite but, I was thinking a unit of swordknights might be a good target.  If they can stay base to base they are pretty hard to hit in melee.

Horsepower is a huge threat extender!  Energizer used to be the 3″ battlegroup threat extender but, it was toned down to 2″ in MKIII.  This is a dirty spell on any heavy and it gets crazier when combined with the feat.

Jumpstart is useful to shake effects and is affordable to cast.

Lock the Target can limit lower armor models from charging. It’s risky to cast this on something ARM19 or higher.

Can we say absurdly long threat range?  Can we say easier to hit? Can we combine it all into one? OH YA WE CAN!

Ranged weapons in Kraye’s control gain Beacon and Flare!!!! This means a Ironclad charging with Horsepower and Beacon is moving 5″(Base move)+3″(Charge)+3″(Horsepower)+2″(Beacon)=13″ total movement.  This is not including his 1″ melee reach.  And that is just 1 jack, let alone a whole battlegroup moving that kind of distance!

~Are you excited to see Kraye 2.0 back on the field?  We are!  Please share your comments below.

Author: Revenant
Revenant is a veteran tabletop wargamer with over 10 years of experience. His specialty is Privateer Press' Warmachine & Hordes gamesystem. He began writing for BoLS in 2009.
Advertisement
Cygnar Rules Tactics Warmachine-Hordes
Advertisement 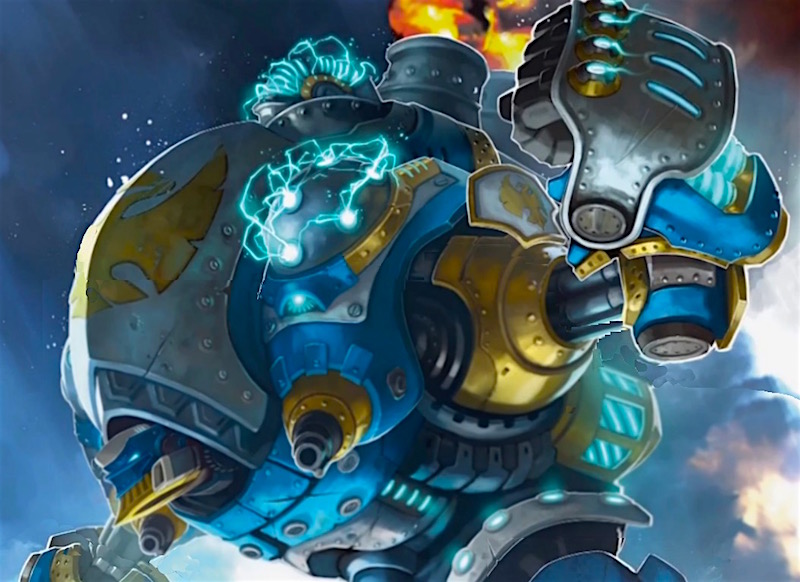