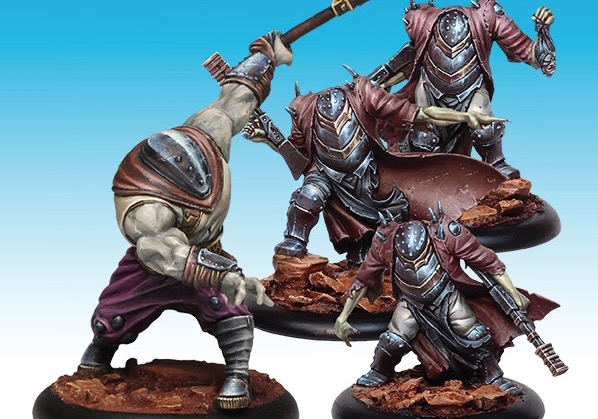 Here’s an unboxing of some of my favorite minis from Gencon50. Time for Raze and his loyal disciples.

Raze is one of the most powerful beings on Samaria. While he is clearly an ally of the Skarrd, he has no allegiance to any Cult. His origins are unknown, but he has been alive and fighting for as long as anyone can remember. Some speculate he may have even been alive before the Collapse. His undeniable might has attracted numerous followers from among the Skarrd. They even have their bodies grafted to match Raze’s distinct and powerful frame. 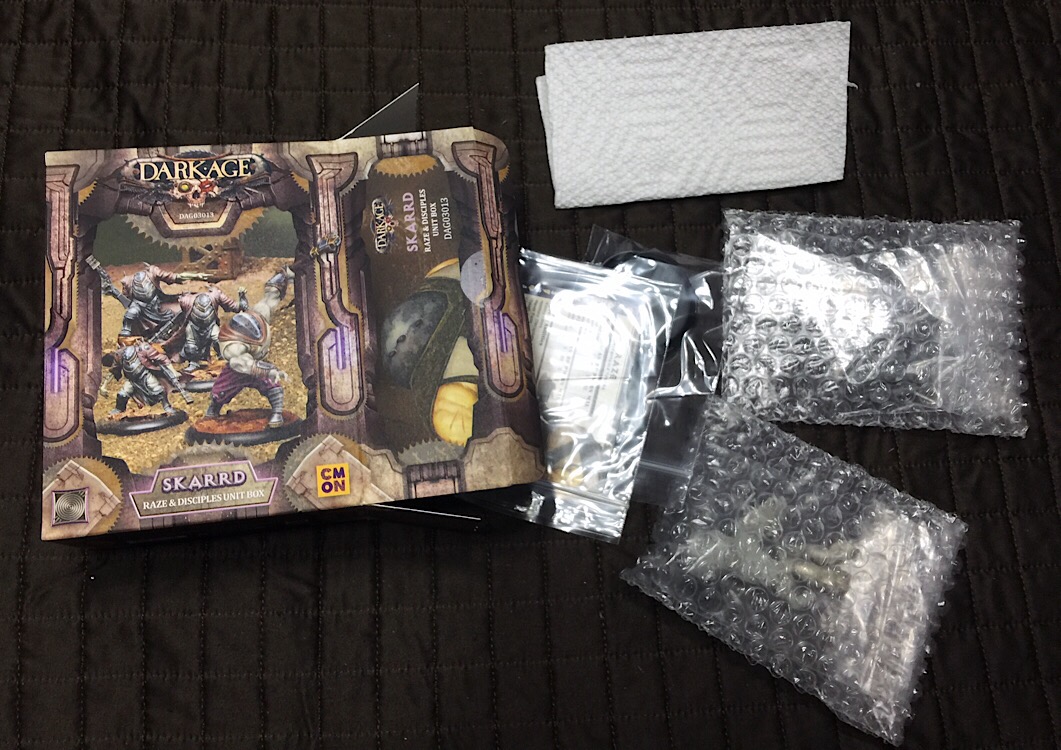 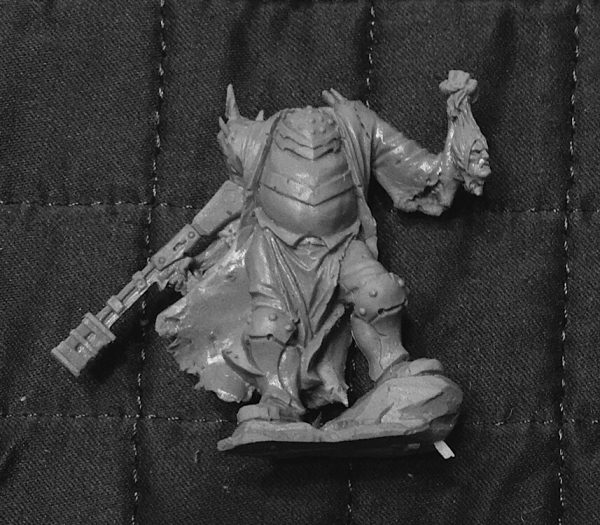 Our first disciple doesn’t even require assembly. That’ll save you some time. 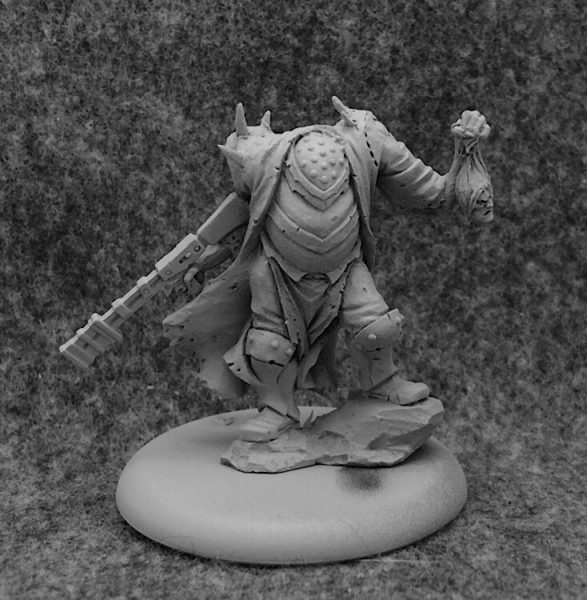 Nonetheless, here he is cleaned up and primed. There was a somewhat tricky-to-deal-with mold line down his gun but this was the only hard part to clean. I was worried I’d snap the resin cleaning such a delicate bit but it held. 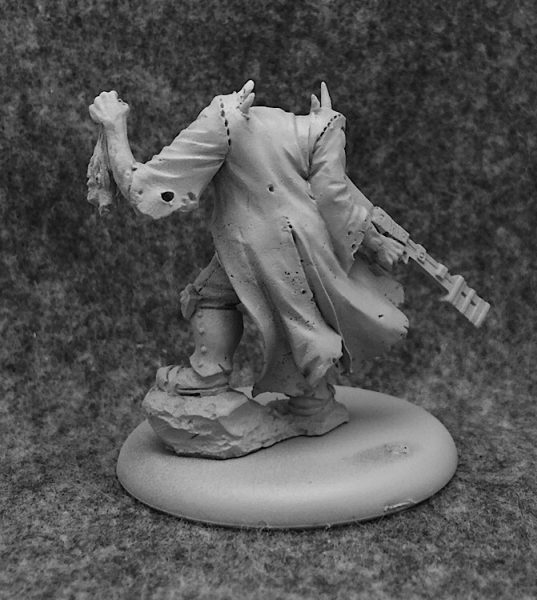 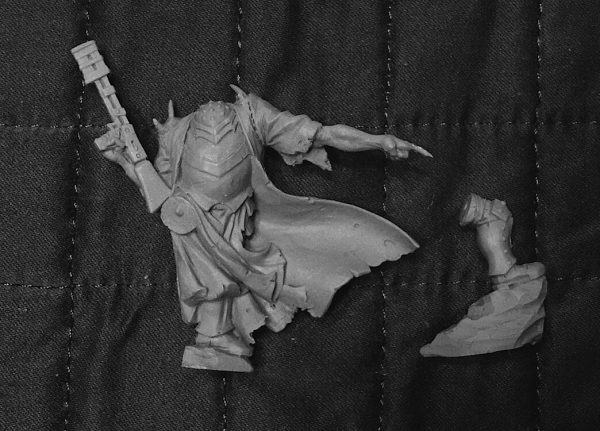 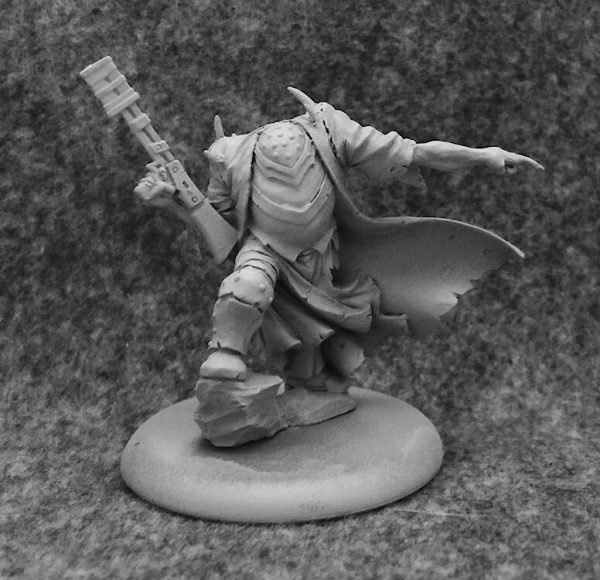 And here he is assembled. 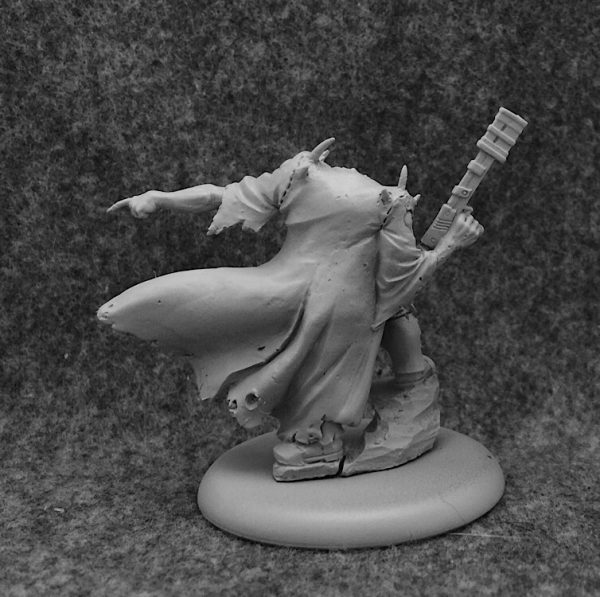 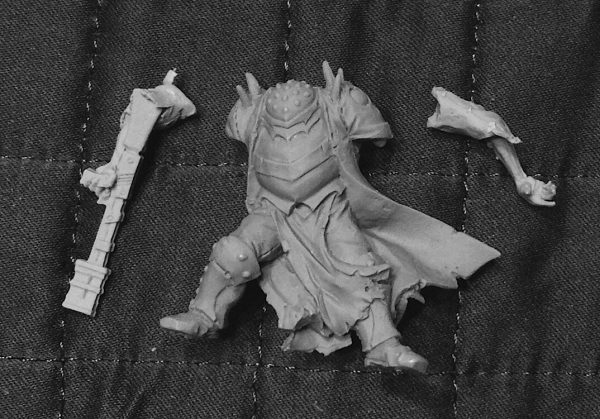 And here’s our last disciple. 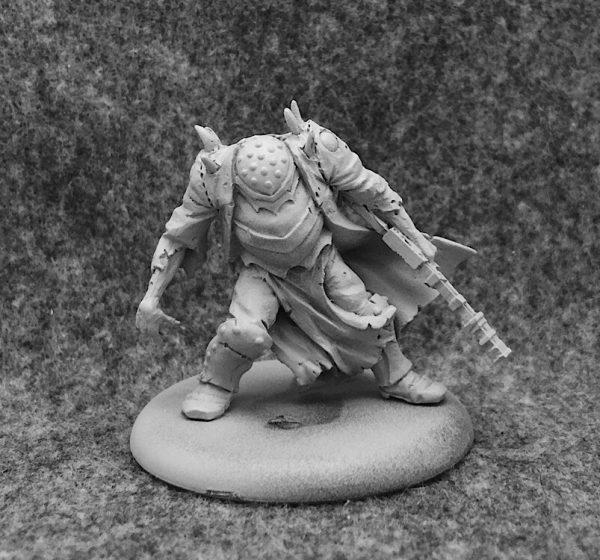 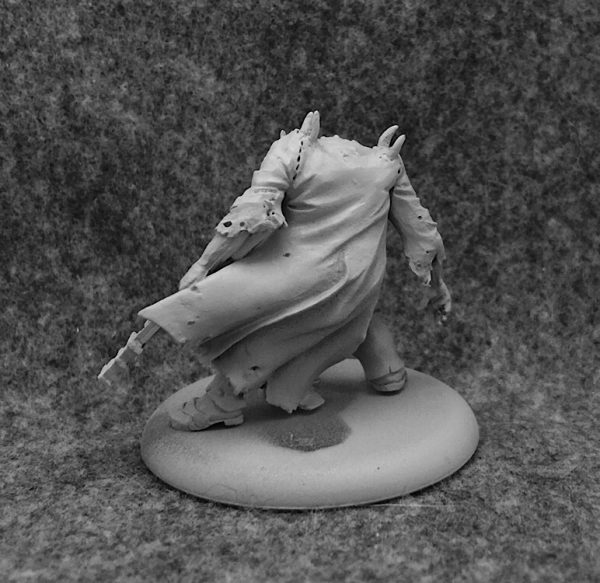 And the reverse again. 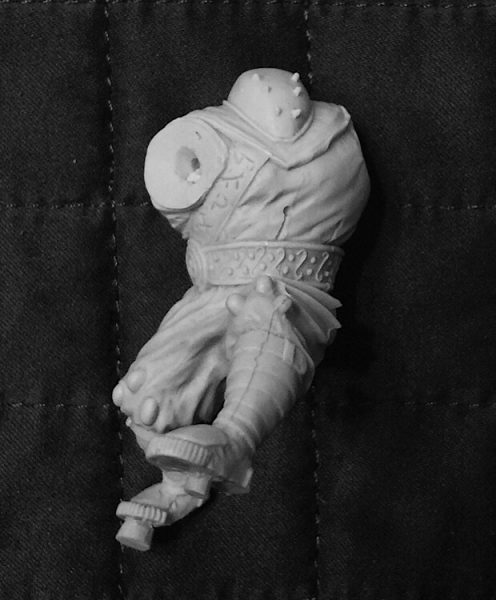 That just leaves the big guy. Raze is another older sculpt I’ve always loved. Like the Warhead from my last Dark Age article, I’m happy to add Raze to my Dark Age collection. Of course I’ll always wonder how awesome a resculpted Raze would have looked. 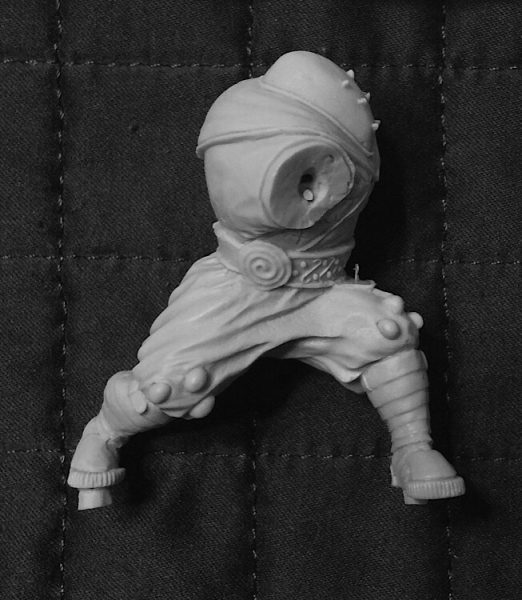 Raze has a very dynamic pose so let’s show him off from lots of angles. 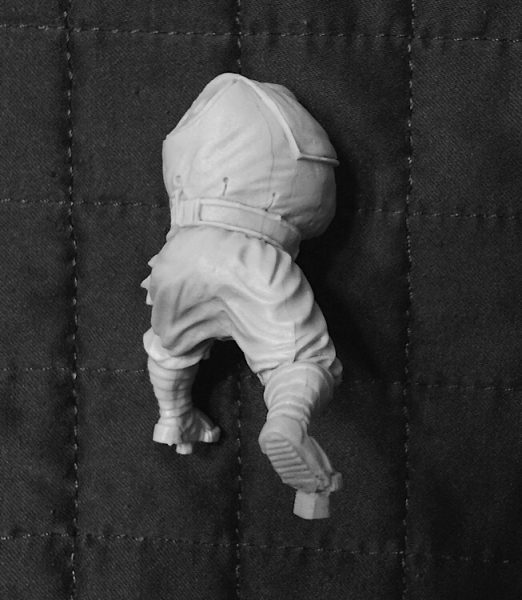 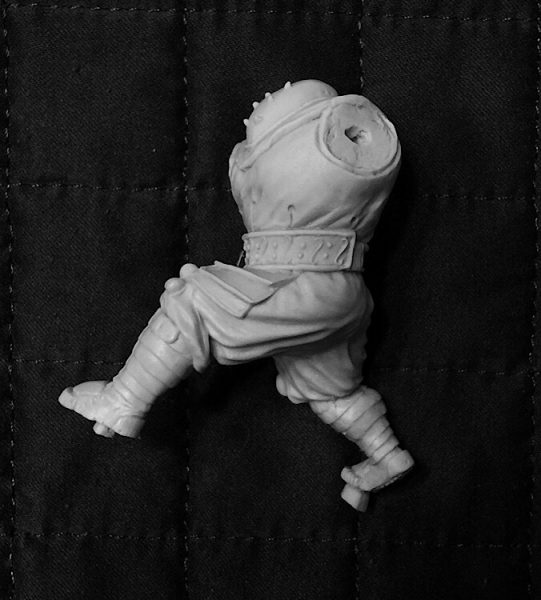 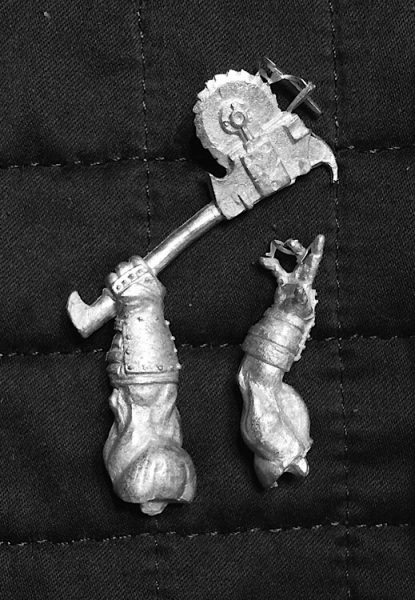 And here are his arms. 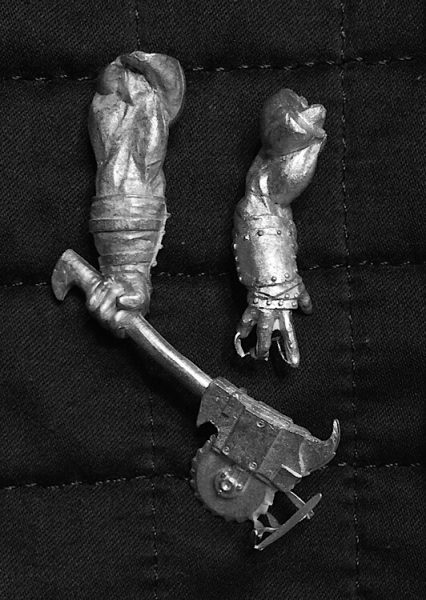 Hey… let’s count those fingers. 1, 2, 3, 4… Wait a minute. Skarrd might be a little abnormal, but they still have 5 fingers. Is Raze even human or does he just have a very strange mutation?

Will anyone ever solve this mystery? 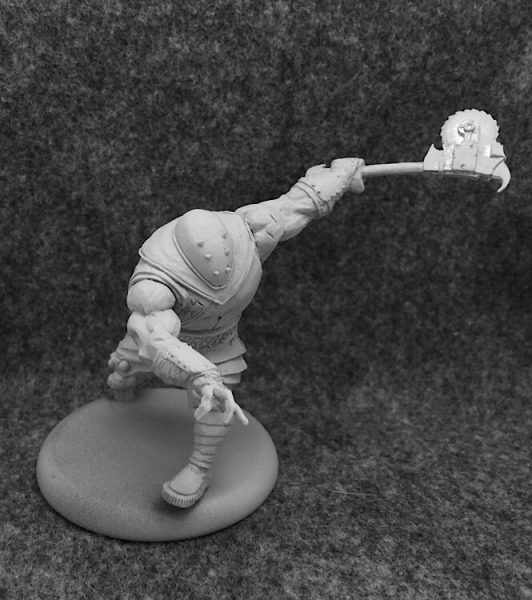 Well here he is all put together. 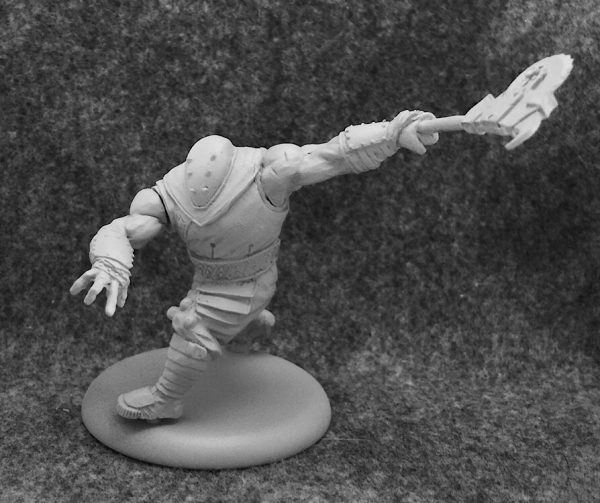 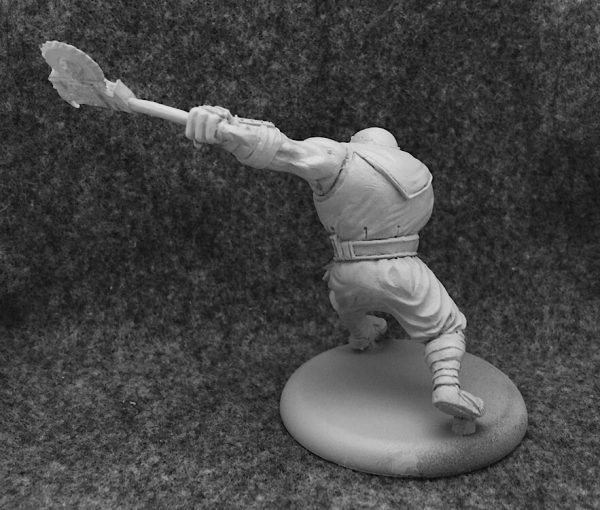 Playing Raze and His Disciples

Raze and his disciples add up to 425 points – almost enough to be a fully playable force on their own. You can download their cards for free at the Dark Age website. Or click this link I made to go straight to them.

If you want a suggestion for a model to add to get to 500 I’d say go with a Grafter or a Sister of Charity. If you don’t own them already you might want to hold off buying them until they’re resculpts are released and they are packaged together. I’m guessing the two of them will be packaged alongside the Bone Doc and Fetish Bearer, but that is 100% speculation.

Back to the box set at hand, the Disciples are not only fairly hard to kill but also have decent ranged weapons. Their Pipeguns pack an above average AS and PW for ranged weapons, and they even have RF 2 so they can shoot twice per round. Most importantly though their weapons have Knockdown which can set up Raze himself to really go to town.

Raze’s main weapon, in addition to having a very high AS and PW, does Extreme Damage (two damage instead of one) against Prone models. Anything Raze hits will also receive a Sunder Armor Counter reducing its ARM by 2 for the remainder of the game. If Raze attacks a Prone model, it’s probably going to die. Of course if it’s not Prone he’ll probably still kill it since he can knock models Prone himself if he has to, but why not stack the odds?

Other than that, Raze is extremely hard to kill with 4 wounds, 20 AR, and the chance to keep fighting and fighting with Unstoppable and a high PS. The models in this set aren’t very subtle but they can do a lot of damage.

That’s just a very basic overview. The helpful folks on the Dark Age: Samaria Reborn Facebook Group can help give you more info.

You can browse previous Dark Age articles on BoLS by clicking this link.

This article first appeared on my own blog toomini.

Follow it to get a look at these articles before they show up on BoLS. There are also a lot of great painting articles there that haven’t made it here yet.

~Hope you enjoyed the article! What do you think of Raze and his loyal Followers?

Author: Ben Williams
Ben Willimans is a Professional Painter and Columnist at Bell of Lost Souls. He has been involved in the hobby and art side of miniatures and the tabletop gaming industry for over 20 years. He has won multiple national painting awards.
Advertisement
CoolMiniOrNot Dark Age Miniatures Unboxing
Advertisement 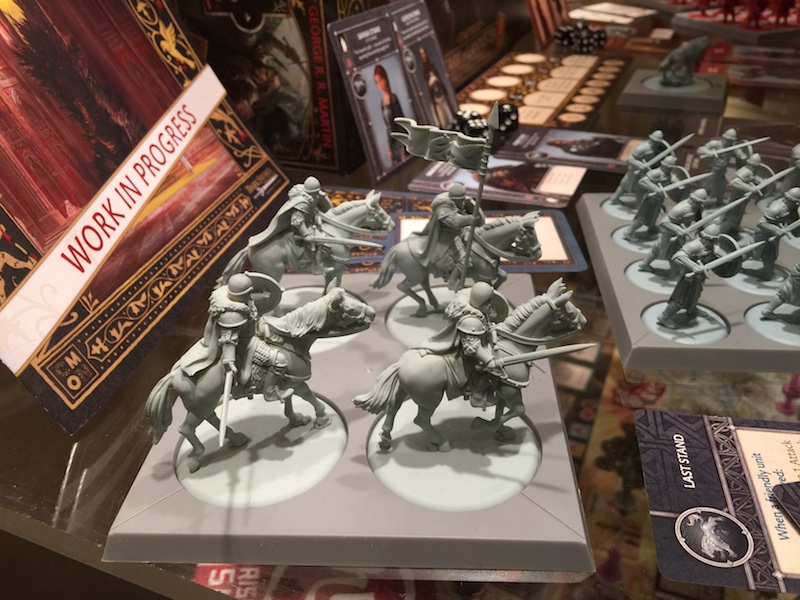