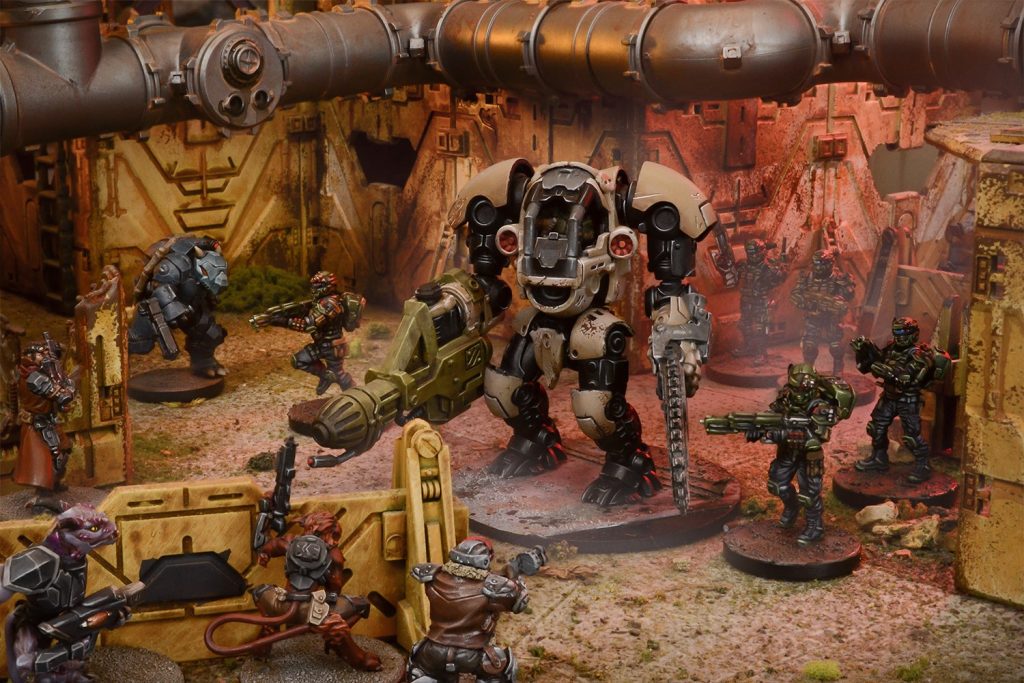 A whole new faction makes its appearance in Deadzone. Come and meet the GCPS.

Mantic is introducing a new faction to Deadzone. Elevating their background players to the centerstage, the GCPS are made up of private militaries backed by Corporations who consider their soldiers to be expendable assets, and who probably place more value on the equipment than the lives that operate it.

Today we’re introducing an entirely new faction for you games of Deadzone. They’ve been featured in the background a lot, but at long last, the GCPS are taking to the field!

The events of the Mandrake Rebellion showed the GCPS’ rulers that aliens cannot be trusted with humanity’s fate. For this reason the various private militaries of the GCPS are almost exclusively human – being simultaneously the first among equals, while also populous enough to be considered expendable by corporate executives. GCPS marine forces are rarely deployed to Deadzones, mostly because no corporation would risk the Council’s ire trying to circumvent a Containment Protocol. In exchange for safeguarding frontier commerce that a Plague incursion, Veer-Myn infestation, or open rebellion would jeopardise, CEOs prefer to let the Enforcer Corps conduct their gruesome work and simply write off any local assets from their ledgers, an exercise in sunk costs versus future investment opportunities elsewhere. Of course, these local assets often include defence garrisons, marine regiments or security details, soldiers with the sheer misfortune of being around when Containment is declared and left for dead.

It is a testament to the courage and resourcefulness of humanity that there are still organised and effective militaries fighting in active Deadzones across the galaxy, although no record will remain of their bravery. The new GCPS Faction Starter and Booster feature the GCPS miniatures well ahead of their Warpath release. These are the rank-and-file troops of humanity, equipped with advanced weaponry, sent out to protect profits and enact hostile takeovers of valuable assets. The core of the new range is the Hard Plastic GCPS troopers frame, which includes enough components to build 5 GCPS Troopers with Laser Rifles, or 5 GCPS Rangers. There’s also components to build a squad sergeant, a communications trooper, and to add either a flame thrower or a grenade launcher. Oh and there’s a variety of helmets, heads and accessories to customise you troopers – that’s a lot of stuff for one sprue!

These are added to with metal upgrade packs that come with both the Faction Starter and Booster. The Starter includes a set of Anti-Infantry heavy weapons teams, which include kneeling legs, heavy weapons platforms and extra arms so you can build two heavy weapons teams and one engineer. The weapons of choice here are the Mortar and Autocannon – you get two of each so that you can equip both squads with the same weapon, or field a combination of the two! The Faction Booster includes not one, but two upgrades for the Rangers. There are Thermal Mines and a Thermal Rifle, allowing you to build Tank Hunters (for Warpath or Deadzone) and a set of the oft-requested Sniper Rifles, which can not only be used by the GCPS, but also ‘appropriated’ by an Rebs Players. There’s also a set of Anti-Tank Weapons Teams, which is the same as the above, except it replaces the Anti-Infantry Weapons with a Missile Launcher and a Heavy Laser Cannon. Again, you get two of each, so you can choose to build whatever combination suits you Strike Team!

The new rules for the GCPS in Deadzone will be included in the box, as a small printed leaflet. This contains the full army list, any extra special rules you’ll need to field the GCPS, and a weapons guide which identifies what each miniature is carrying. These rules will also be available to download from our website for free once the sets are released. If you want to field the GCPS in games of Warpath or Firefight, then you can find their rules in the rulebook and these sets make the perfect starting point for your force! In Deadzone itself, the GCPS are a strong newcomer to the scene. Their core troops are relatively inexpensive, but not for lack of skill or equipment; you can choose to build either a highly specialised list with few miniatures, or have large strike teams made up of reliable core infantry with decent stats. The Heavy Weapons Teams can inflict a lot of damage at range, especially to tightly packed troops, which gives you a good advantage in the early turns of the game. You can focus on only ranged combat and attack your foe from afar.

Alternatively, the GCPS can be played in a very aggressive manner. The Rangers’ Aerial Deployment rule allows these specialists to deploy ahead, perfect for capturing objectives or setting up firing arcs on the enemy. Coupled with the aggressive Leader abilities, such as Overwatch or Eye in the Sky, you can provide covering fire as your Strike Team advances unhindered. Don’t forget, they also have access to the ubiquitous Strider, a monster in both ranged and close combat.

The new GCPS Faction Starter and Faction Booster are available for pre-ordernow and shipping at the end of the month. If you want to get a Strike Team (or army) of these soldiers, then you can pre-order both of these sets, or the GCPS Strike Force Bundle, which includes both the Faction Starter and Faction Booster at a discount versus purchasing them separately!

Author: J.R. Zambrano
Bell of Lost Souls Staff Writer and DM, J.R. covers RPGs of all stripes and on occasion eats sandwiches. You can ask him about either at [email protected]
Advertisement
Deadzone Mantic Tabletop News
Advertisement