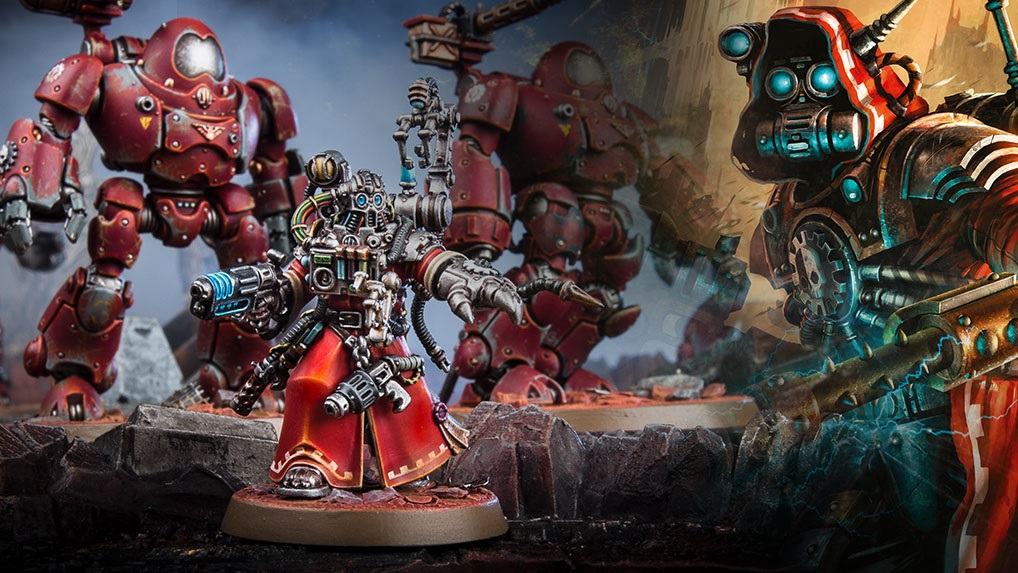 The Adeptus Mechanicus Codex is up for Pre-order along with all the special editions!

Everything you need to get a Adeptus Mechanicus army primed for games of Warhammer 40,000 is in here:

– 22 datasheets containing rules for every Adeptus Mechanicus unit;
– Army abilities reflecting the Adeptus Mechanicus’ methods of war;
– Armoury of the Machine God: wargear both ranged and close-combat used by the Adeptus Mechanicus;
– Points values for all miniatures, weapons and wargear for use in Matched Play games;
– Congregations of War: rules for Battle-forged armies:
– Forge World Dogma for armies with the following forge world keywords – Mars, Graia, Metalica, Lucius, Agripinaa, Stygies VIII, and Ryza;
– 28 Stratagems, 20 of which are unique to this army – 7 are used with specific forge worlds, and 1 is specific to the Questor Mechanicus,
– the Arcana Mechanicus: a selection of rare wargear, some forgeworld-specific;
– 6 Warlord Traits for use by any Warlord, with a further 7 specific to the main forge worlds: Mars, Graia, Metalica, Lucius, Agripinaa, Stygies VIII, and Ryza;
– 6 unique Tactical Objectives. 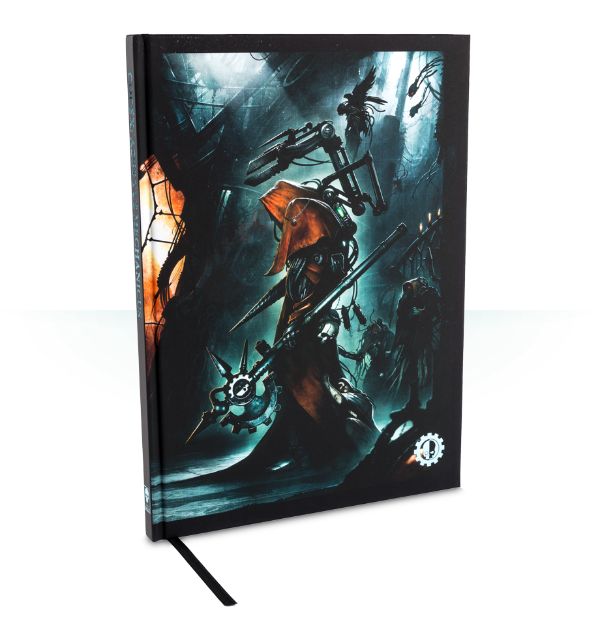 Available while stocks last, this Collector’s Edition is presented as a complete and unabridged soft touch hardback with exclusive cover art, black page edging and a ribbon marker. 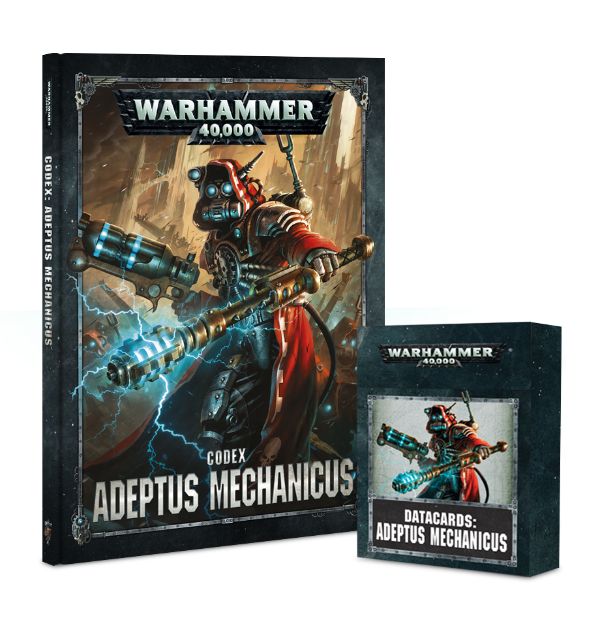 Disciple of the Machine God Collection $95 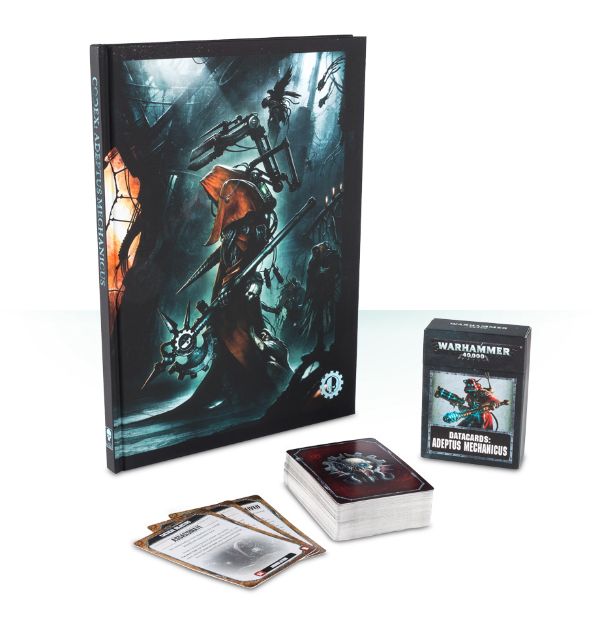 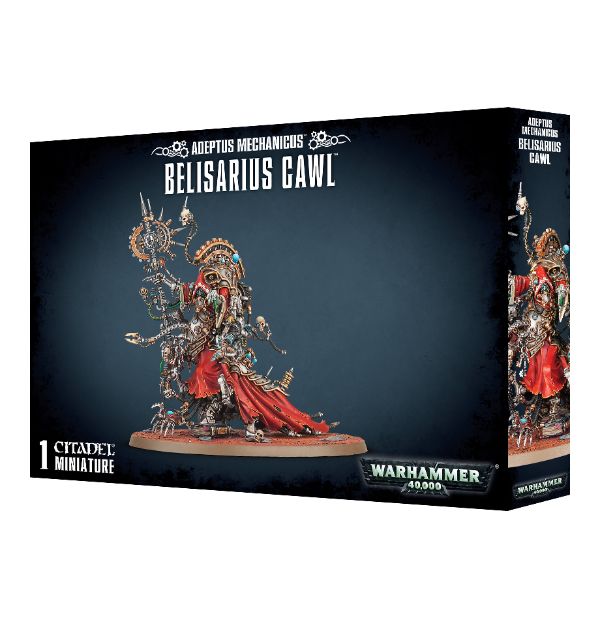 Archmagos Dominus Belisarius Cawl was already old at the dawn of the Imperium, over ten thousand years ago. During that span of ages the Tech-Priest has served as a Forge Lord, a Lexico Arcanus and a renowned Magos Biologis. On the battlefield Cawl is a force to be reckoned with, fearlessly scuttling into the thick of the fighting, assessing threats and broadcasting carefully planned orders to his troops. Most enemy fire is thwarted by his force field; however even when parts of his mechanised body are blown off, cables snake out in a whir of activity to effect immediate repairs, or swarm anything that dares comes close… 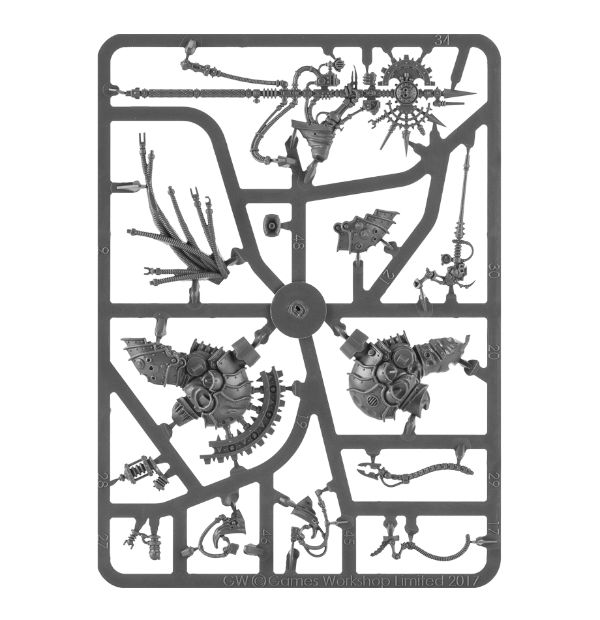 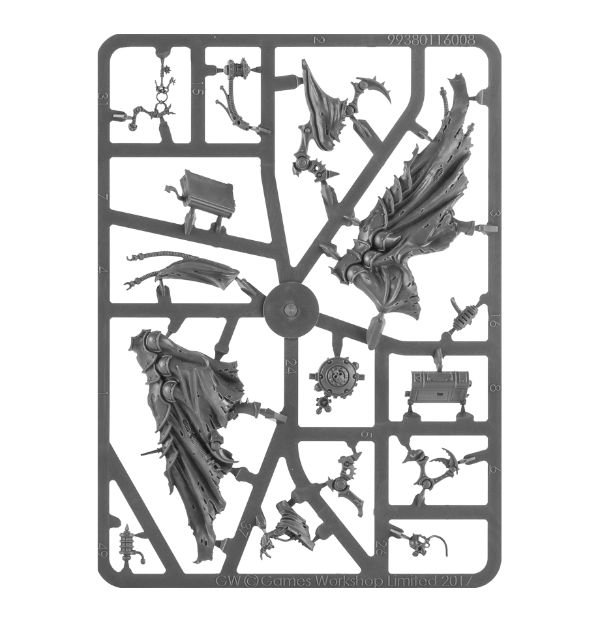 This multi-part plastic kit contains the components necessary to assemble Belisarius Cawl, Prime Conduit of the Omnissiah. Towering over his Adeptus Mechanicus brethren, he stands much taller than even other favoured Tech-Priests of the Omnissiah, with countless augmentations distorting his barely-human frame. He carries an Omnissian axe, which acts as a convenient mounting point for an array of sensors and his voice broadcasting unit, and an arc scourge – this arcane energy weapon is covered in cables, sensors and extra appendages. This theme of augmentation is continued throughout – Cawl’s robes are not-quite covering a massive amount of robotic extensions, with several extra legs, prehensile arms and cables dragging along behind him. A scryerskull hovers above, and there are several symbols of the Machine God dotted about the miniature. 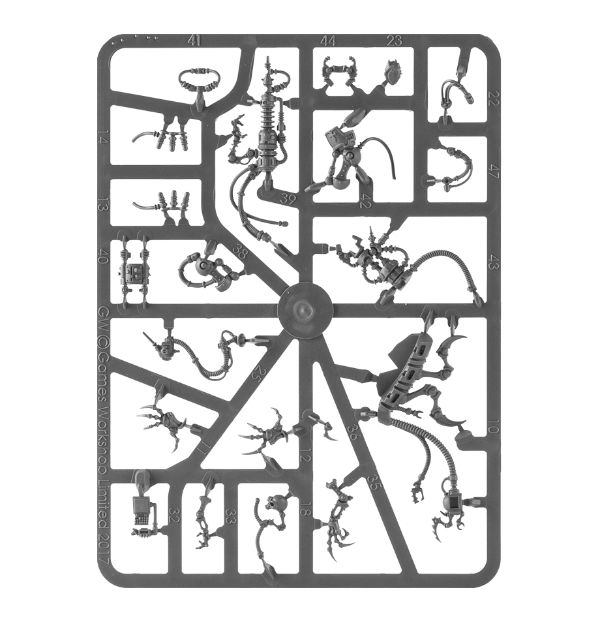 Belisarius Cawl comes as 42 components, and is supplied with a Citadel 105mm x 70mm Oval base. 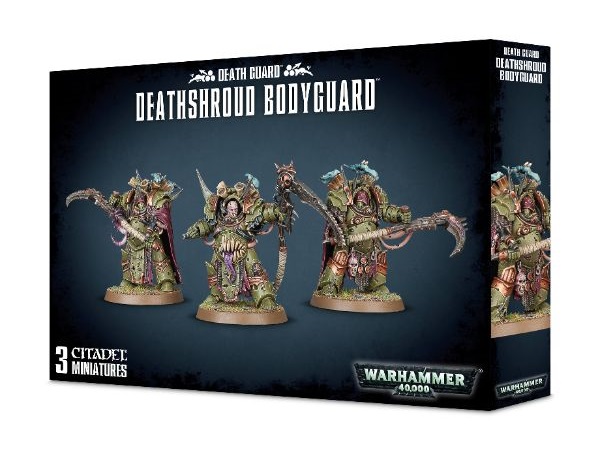 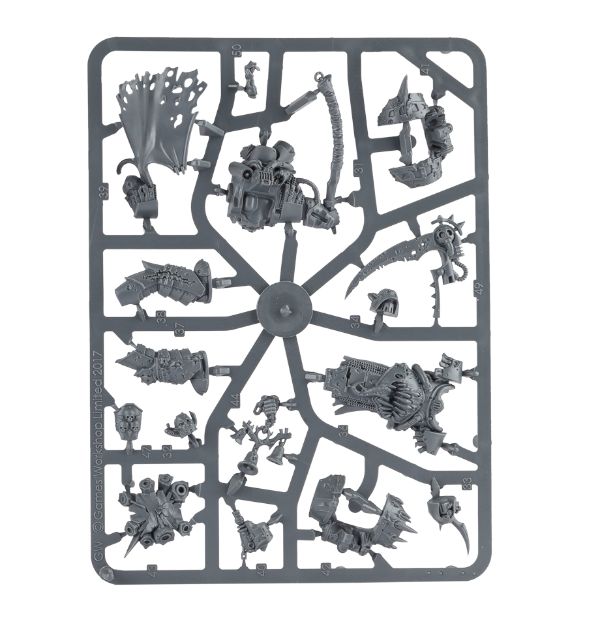 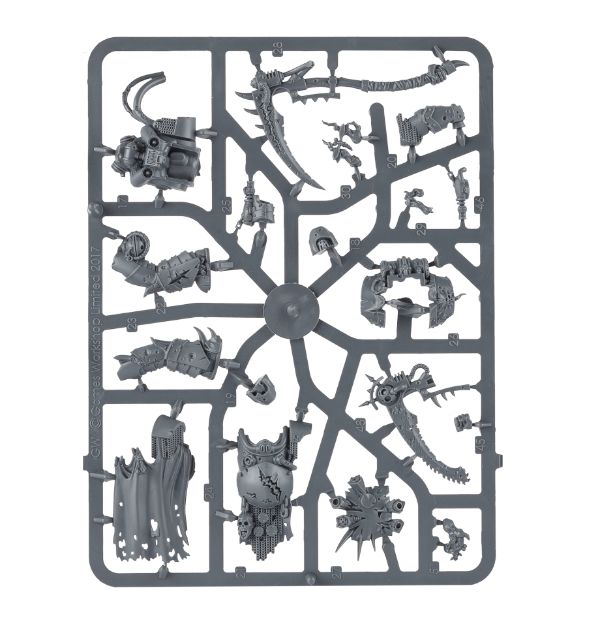 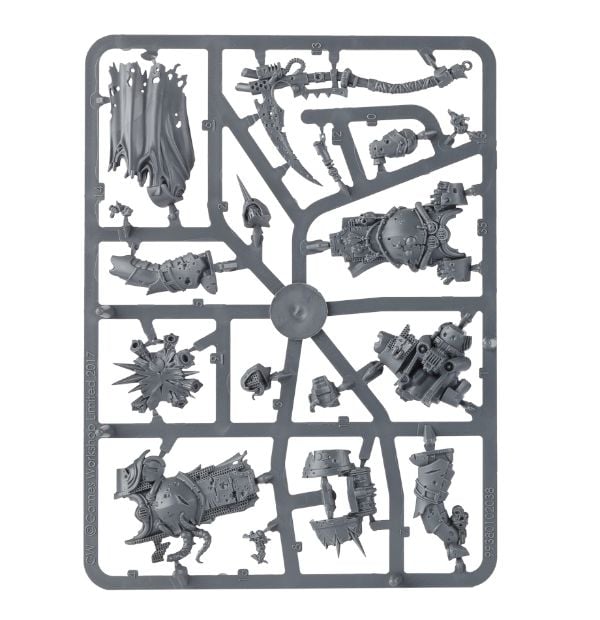 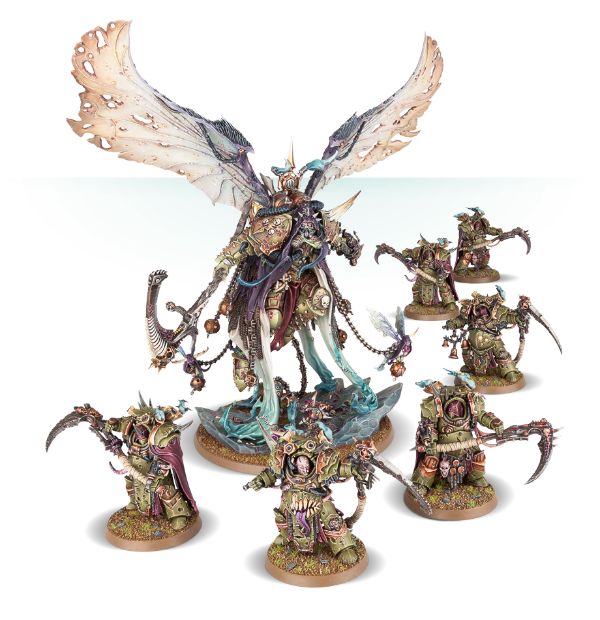 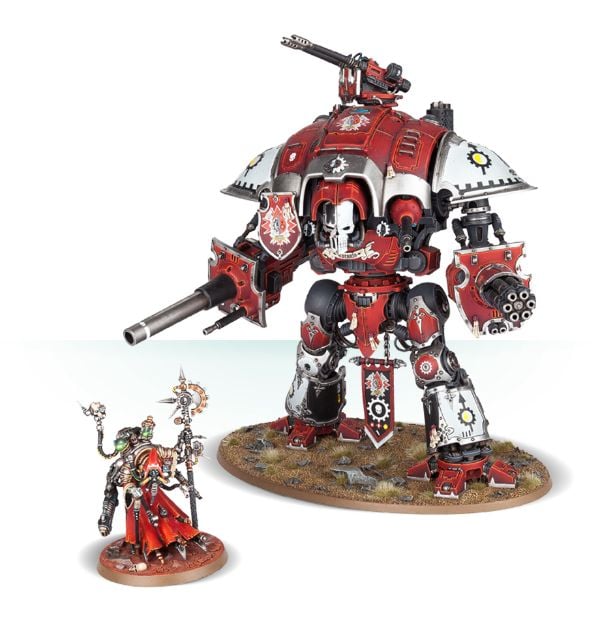 Cogitation and Corruption – it’s a good weekend from Games Workshop!

Author: Adam Harrison
Writer, Editor, Texas Native, and Austinite for 15+ years, Adam covers all things Tabletop Gaming. Which includes Warhammer 40,000, Age of Sigmar, D&D, Board Games and everything else that involves dice, boards, cards and a table. A hobbyist, player, and collector of miniatures and games, Adam's current obsession are his Death Armies for Age of Sigmar, his Blood Angels and Tyranids for 40k, and his ever growing Arkham Horror: The Card Game Collection.
Advertisement
Adeptus Mechanicus Death Guard Games Workshop Miniatures Tabletop News Warhammer 40k
Advertisement