Force Friday has come and gone – but the aftershocks will be felt for decades to come. Or at least until next year. Regardless, it’s a day when fans get to rush to their favorite stores and buy all the latest Star Wars Merchandise is a fervor unlike any other day! Or so I’m told – I avoid the crowds personally. However, there was one product we here at BoLS we were very interested in getting (okay, well there were SEVERAL, but we only sprung for one thing we wanted to show off on camera). Say hello to the new Star Wars Destiny Two-Player Game:

As we’ve mentioned before, you get two starting decks in this boxed set – one for the Heroes and one for the Villains from Star Wars. Clearly, this deck has been inspired by some of the events in Force Awakens and the upcoming Last Jedi movies. 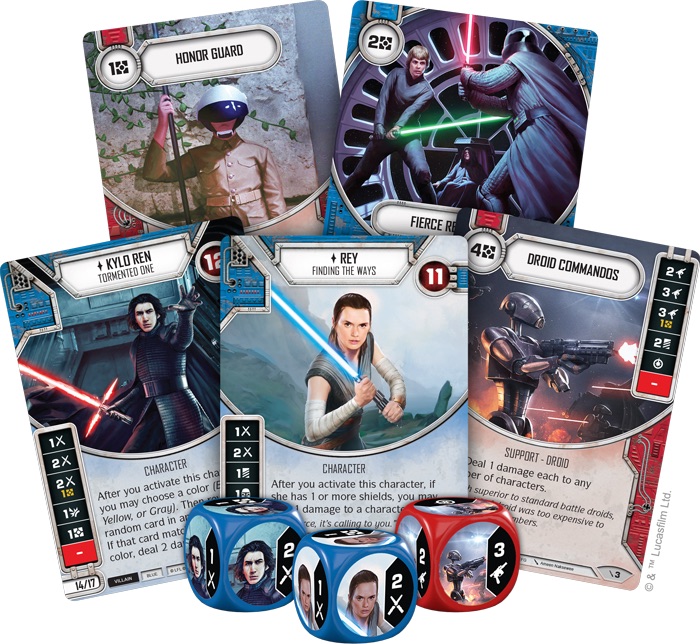 Rey and Kylo Ren are the two “Blue” characters for each pack. They are the force sensitive characters and have access to all the blue abilities and upgrade cards. Also, they each get their own “unique” Lightsaber: 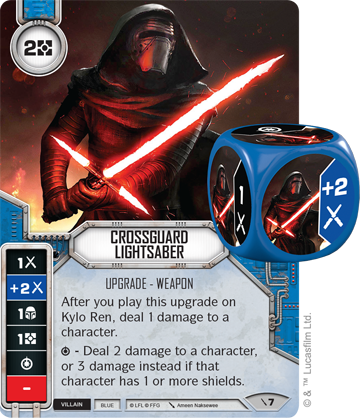 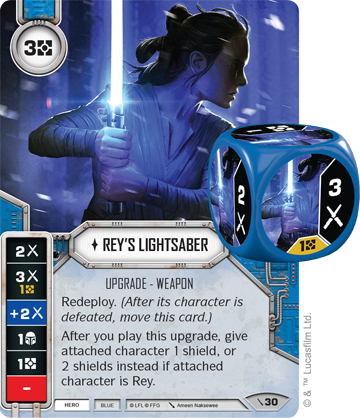 On top of getting new versions with new weapon upgrades we also get new version of Captain Phasma and Poe Dameron: 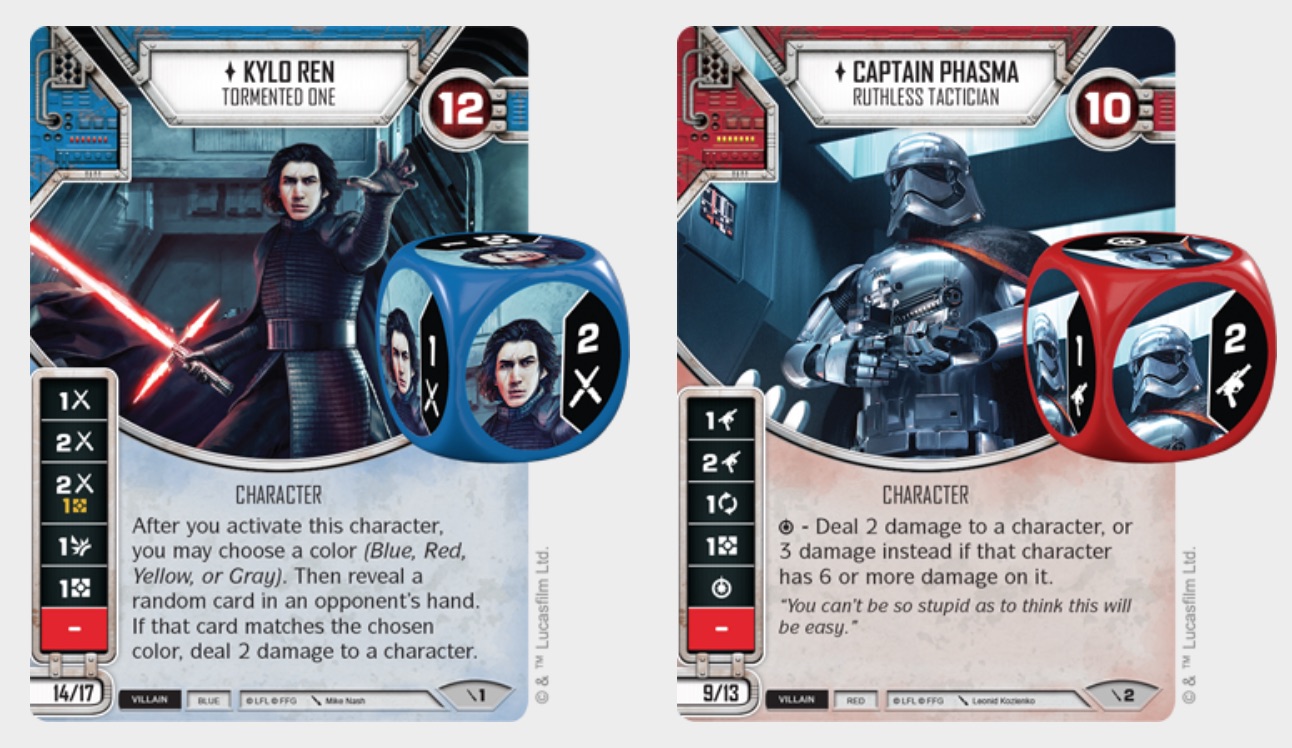 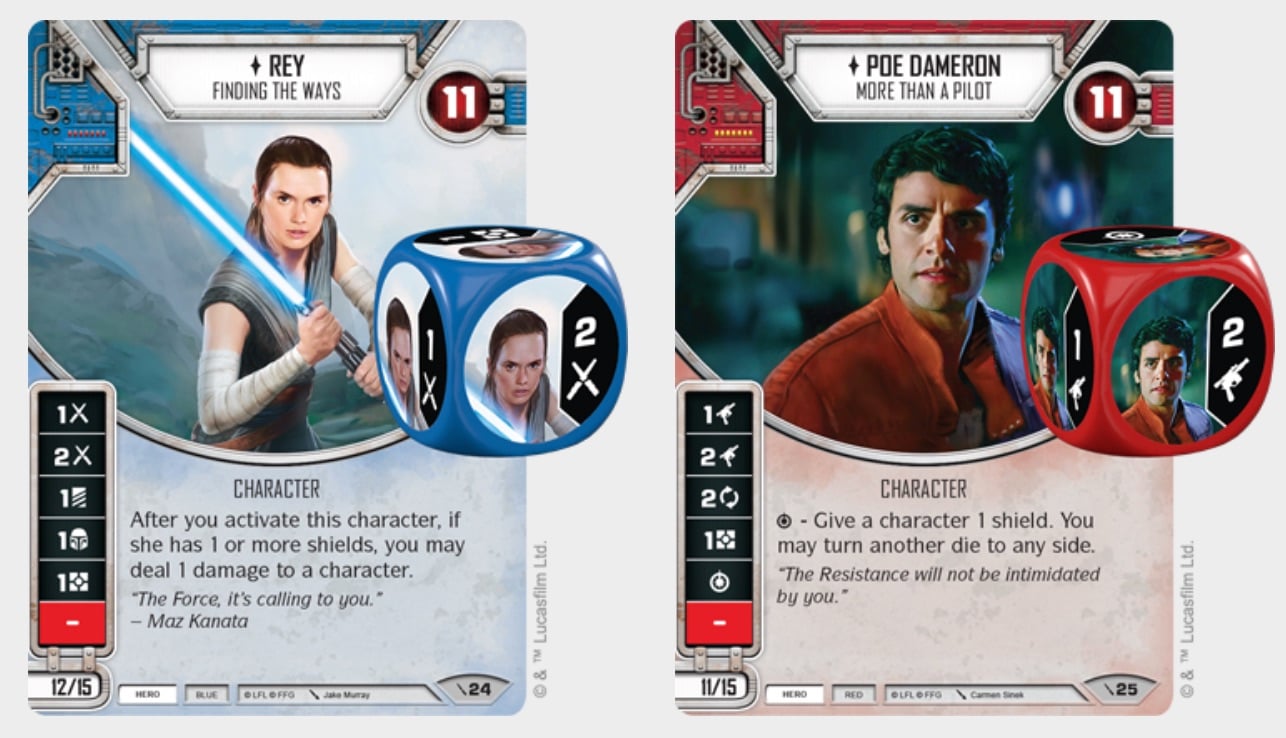 One of the things we noticed from going through the cards in the two decks is that they are “twisted mirrors” of each other. A lot of the cards interact in counter-active ways. Where one deck has a card that attacks a shield on a character, the other deck will have a card that adds a shield. I’ll leave the deck analysis to the pro-card players, but you can see this theme repeated in both decks. Also, I would like to say that each of these starter decks does feel like a “real” deck in terms of being actually worth taking as is. You’ll probably want to add some other cards to the decks and fill them out, but really they are solid starting points.

When we picked-up the game we did have one question and that was concerning the availability of this product. What we didn’t know for sure is if this product was going to be a long-term starting point or if this was a limited edition release purely for Force Friday.

FFG did have this to say about the release:

When we asked our FLGS about the long term plans they didn’t have an additional information on the subject. All we know is that the product was launched on September 1st to be in sync with Force Friday. Could this product be a perennial product? We sure hope so! Star Wars Destiny needed a good starting point and this Two-player box is pretty much perfect for that. We’re really hoping FFG keeps this one around for a long time! 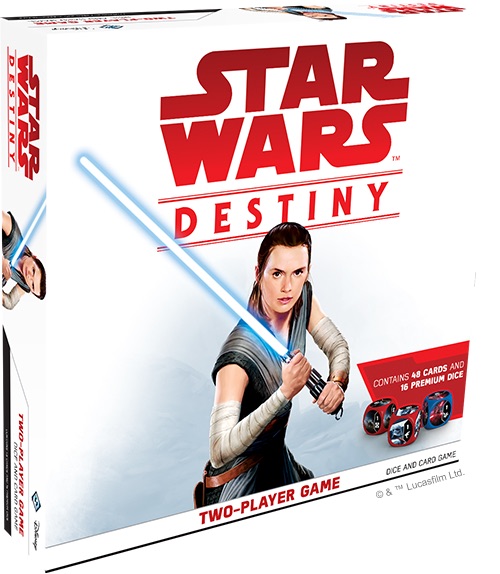 Take control of your favorite Star Wars™ characters and decide the fate of the galaxy! Upgrade your heroes and villains with iconic blasters, lightsabers, Force powers, and more. Use premium dice and cards in a fast and furious duel to defeat your foe! This product contains all the dice, cards, and tokens needed for two players to start playing Star Wars: Destiny!

Are you ready to jumpstart your Destiny with a new Two-Player boxed set?

Author: Adam Harrison
Writer, Editor, Texas Native, and Austinite for 15+ years, Adam covers all things Tabletop Gaming. Which includes Warhammer 40,000, Age of Sigmar, D&D, Board Games and everything else that involves dice, boards, cards and a table. A hobbyist, player, and collector of miniatures and games, Adam's current obsession are his Death Armies for Age of Sigmar, his Blood Angels and Tyranids for 40k, and his ever growing Arkham Horror: The Card Game Collection.
Advertisement
FFG - Fantasy Flight Games Star Wars Star Wars Destiny Unboxing
Advertisement