A Death Curse has befallen the world. The only way to stop it is to venture into the Tomb of Annihilation. Do you dare?

Our friends at Dragon’s Lair Comics & Fantasy are no strangers when it comes to RPGs. They are fans of play almost as much as we are – that’s why when Evan showed up with a copy of Tomb of Annihilation, the latest Adventure book from Wizards of the Coast, we were both pretty giddy with excitement:

Let’s go over some hard facts before we dive into the meat of this one. First off, this is a 256 page hardback book that also has a full pull-out poster/campaign map. It’s designed in a way that you can take a group of level 1 adventurers up to level 11 (if you go straight by the book). Alternatively, because it’s very well detailed, you could also run this as just a part of your world. You could visit the different locations in a “non-linear” order if you really choose to – it’s really up to how creative your DM is and what your group wants to do. Personally, I would love to just have this book as reference or an “idea” book. If you’re running a custom campaign you should absolutely pick this up and “borrow” locations, ideas, NPCs and plot hooks to spice up your own game and world.

From here on out I’m going to be talking about some of the events and story about this book. If you don’t want it spoiled, skip the rest of this one. If you’re going to run this as a DM feel free to keep going but if you’re going to be a player in the game do yourself a favor and head-on out.

One of the biggest “big bads” from way back is back – Acererak the Lich is here to cause problems again. He has created a Death Curse which is preventing NPCs from being resurrected. On top of that, if anyone was brought back from death, they are starting to get weaker and eventually they degrade and die as well! The souls of the dead aren’t just moving on either – something is devouring them and utterly destroying them. The Adventurers have to find out what is causing this terrible curse and must put a stop to it before more damage is done.

That’s the short version of this adventure book. We already love it! After getting to flip through it, the Tomb of Annihilation is more than just a massive dungeon crawl – it really is a fantastic adventure to play through. It’s really multiple adventures in a massive story arc. Basically the first half of this book is the adventure to find this “Tomb” of Annihilation. And the last 1/2 is basically a 6 level deep dungeon crawl which is as epic as it sounds!

The majority of the adventure takes place in the land of Chult which is new for 5th edition. The main city is the Port of Nyanzaru which is a massive place. The real kicker is that it’s not just big and empty either. There are lots of NPCs and locations. We counted roughly 50 pages of very detailed notes on the cities, locations, and NPCs you’ll encounter. It really does feel alive with a cast full of colorful characters.

There is an evil soul-eating baby the size of an elephant called an Atropat who is bound to a huge crystal called the Soulmonger. There’s lava, snake people, a Zombie-spewing T-Rex. The land of Chult is insane in all the best possible ways and their is the dungeon which is a character all by itself. The whole package is just fantastic.

We really liked that this adventure because of how it can work with pretty much any DM or group. New players, old vets, even really powerful high-end groups can utilize this one. If you’re wanting to explore the land of Chult as the DM we suggest you sit down and read this one straight through. You’re going to want to know all the ins-and-outs before your group goes traipsing through the jungles. But once you’ve read it, you’ll be so full of ideas that running it or another game is going to be one of the easiest and most enjoyable experiences you’ve had. We’re excited about this one and can’t recommend it enough! The Tomb of Annihilation is in stores now. 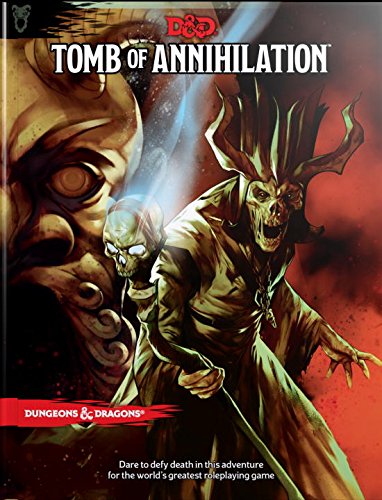 Dare to defy death in this adventure for the world’s greatest roleplaying game.

Are you ready for an adventure where PC death just might be permanent?

Author: Adam Harrison
Writer, Editor, Texas Native, and Austinite for 15+ years, Adam covers all things Tabletop Gaming. Which includes Warhammer 40,000, Age of Sigmar, D&D, Board Games and everything else that involves dice, boards, cards and a table. A hobbyist, player, and collector of miniatures and games, Adam's current obsession are his Death Armies for Age of Sigmar, his Blood Angels and Tyranids for 40k, and his ever growing Arkham Horror: The Card Game Collection.
Advertisement
Dungeons & Dragons Tabletop Spotlight Videos Wizards of the Coast
Advertisement