The Eldar are getting 13 new Remnants of Glory (aka relics) and we’ve filtered through them to pick out 5 that we can’t wait to try out!

The Remnants of Glory are unique for the Eldar. There are 5 unique Relics and there are 8 more “generic” relics, too. They are an ancient race and so it makes sense that many of their relics have lots of backstory and history to go along with them. We picked out a handful of our favorites from the codex. Some we chose based on the lore and some we picked because we just liked their rules! That said, let’s dive in: 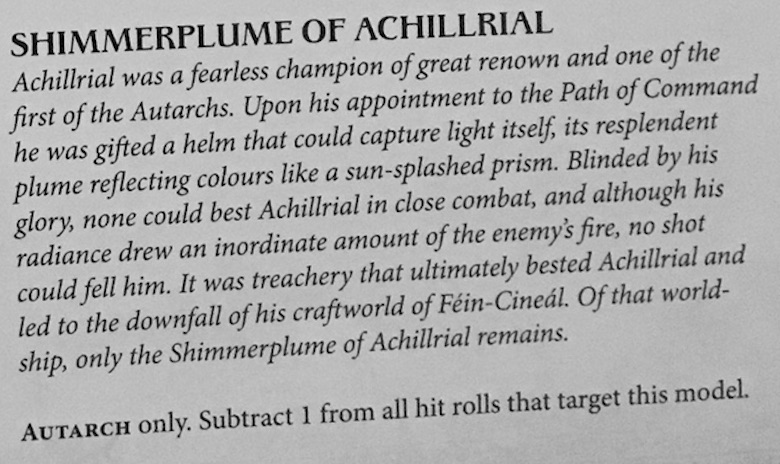 The Shimmerplume of Achillrial has a massive block of text yet the actual rule benefit is a single line. That just seemed very “Eldar” to us. At the same time this actual rule is really simple and effective. A -1 to be hit. Note that it works in both the Shooting and Fight phase! If you stack your cards right, you can end up with a -2 to be hit in the Fight phase and a -4 to be hit in the shooting phase (Alaitoc + Conceal + Lightning-Fast Reactions)!

The Spirit Stone of Anath’lan 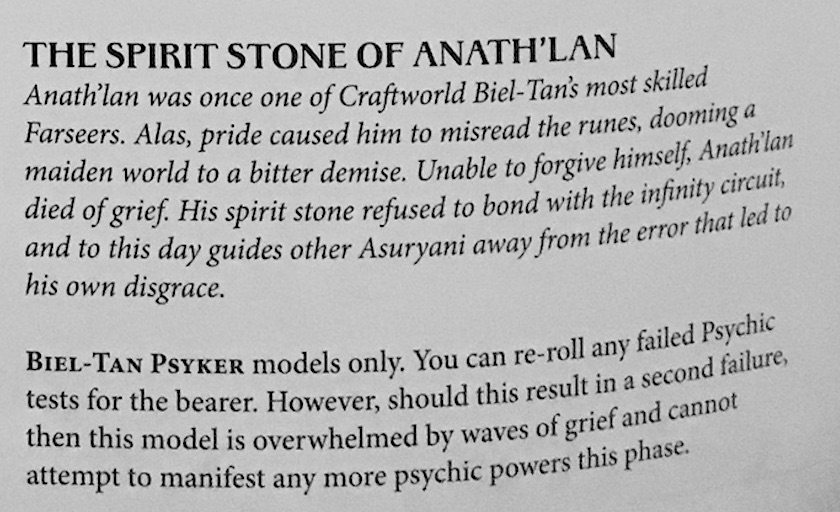 No one knows what it’s like to be the sad gem… Unless you bring the Spirit Stone of Anath’lan. Honestly we just though text was entertaining and the reason that it stops you from casting is because of sadness. Now, here’s the thing – most Psykers that can take this can probably only cast one or two powers anyways…So is it really that much of a penalty? It only lasts for the rest of the phase. 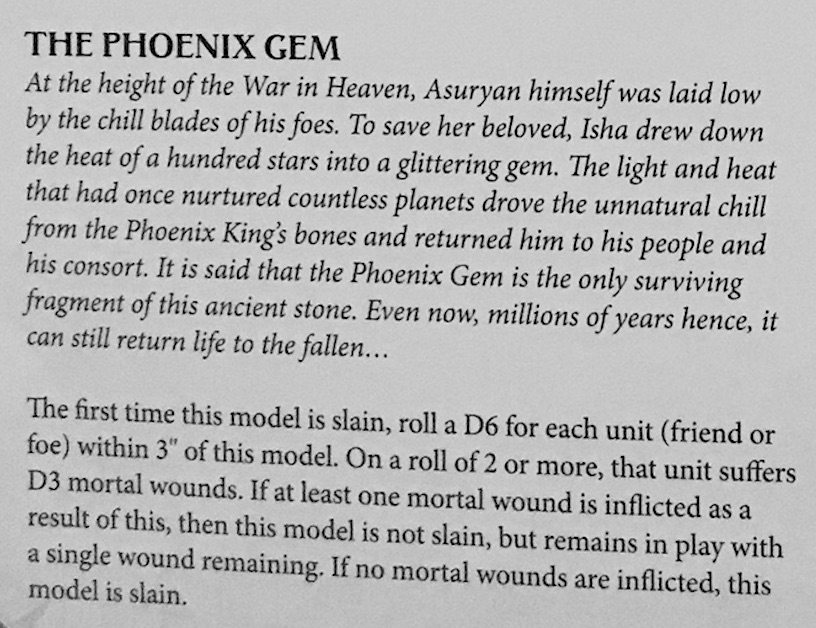 Speaking of gems…The Phoenix Gem is a get out of jail card. Or maybe it’s closer to the reset button. Metaphors aside, when the bearer “dies” for the first time you instead explode causing D3 mortal wouds to each unit within 2″ of you. If at least one mortal wound is inflicted then the model sticks around! 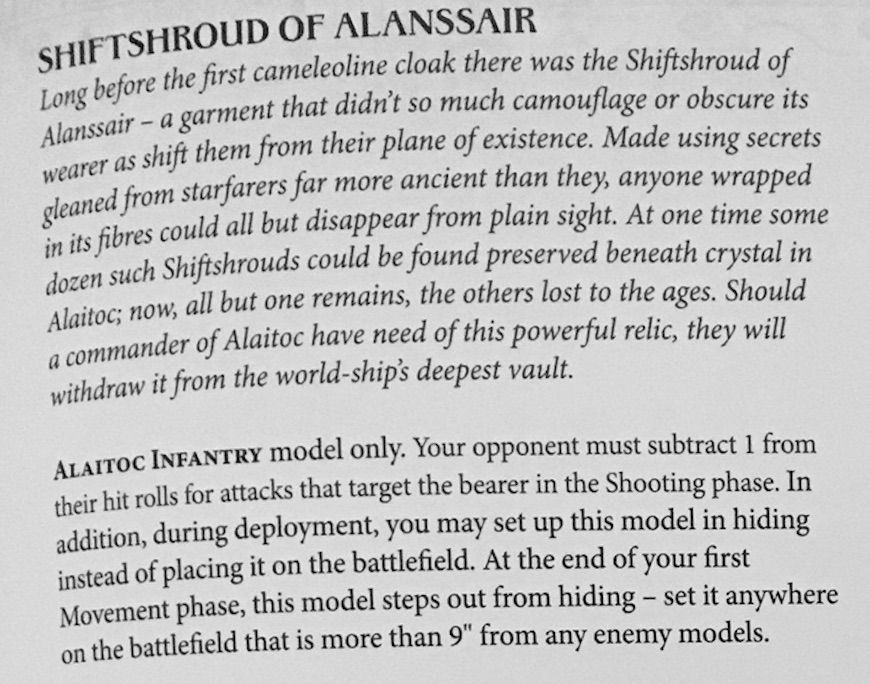 Hey look – an Alaitoc version of the Shimmerplume! Wait – does that mean you can take both in a single army and have two characters running around with an additional -1 to be hit? Yes. However, this one “only” works in the shooting phase. Which…I mean, awesome! You could still run around with a -2 to be hit by shooting over 12″ away (you’re already Alaitoc). Oh and you’ve got a neat re-deploy trick. 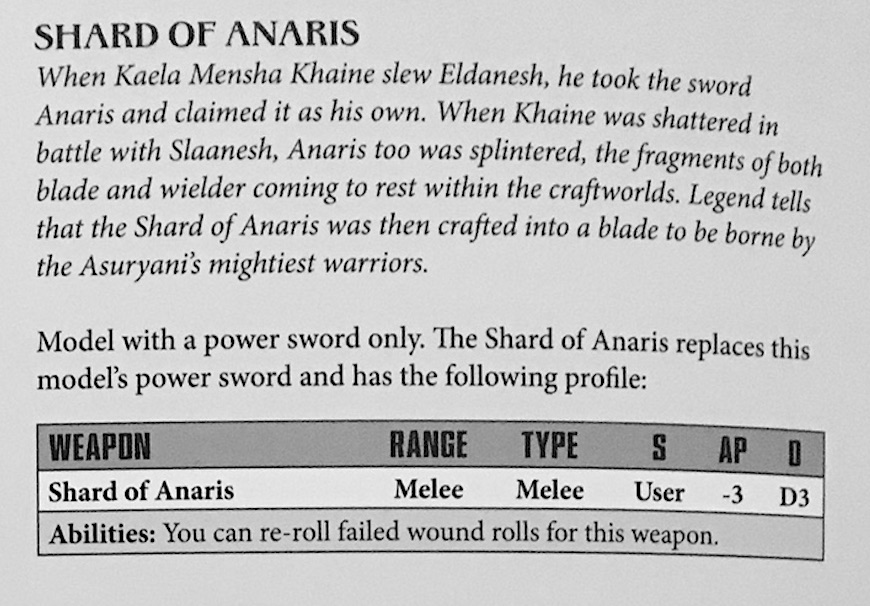 We didn’t want to skip out on the fact that the Eldar also have some pretty cool weapon options. The Shard of Anaris is back and just as deadly as ever. It’s a -3 AP, D3 Damage attack that allows you to re-roll all failed wound rolls for this weapon. This one is kind of a big deal because most of the Eldar models that can take this only have a base strength of 3. That re-roll is going to come in handy. Now there are other weapons that boost your strength. There is a Saim-Hann lance weapon that can allow you a str 8 charge for example. But we went with the Shard because we happen to like the lore about the weapon more.

Those are our picks for our favorite Eldar Relics. We’re really looking forward to causing a -4 to be shot at by a unit with plasma weapons…