40K: Our Favorite Heirlooms of the Astra Militarum

Who brings Heirlooms to battle? The Astra Militarum does – because these are the Heirlooms of Conquest!

We’ve been digging into Codex: Astra Militarum all week and we’ve been impressed/terrified by them so far. The pack a mean punch even before you start adding in their Relics. We’ve gone through their list and picked out a few that we really liked. We think a few of these are going to be regulars on the tabletop where as some of them we picked just because we liked the concept more than the execution. And others just had some great flavor text. So with that said these are our favorite Heirlooms of Conquest for the Astra Militarum:

The Laurels of Command 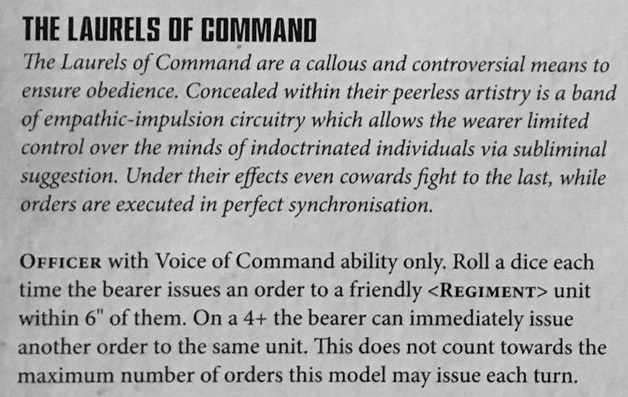 Sometimes you just need to stack orders. The Laurels of Command allow you to to issue more orders to a unit on a +4. This is a really powerful relic for the Astra Militarum and if you’ve been keeping track of the Orders they can issue, the Stratagems they have, their Warlord Trait options, and the unique Regimental abilities, I’m pretty sure you’ll understand why it’s our first pick. 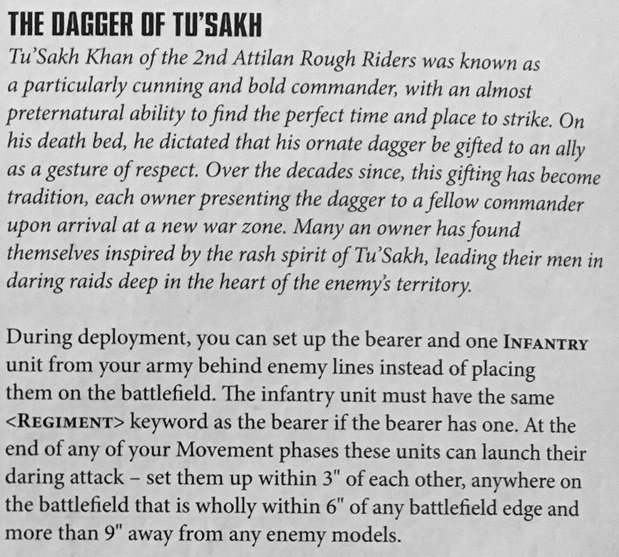 This might sound like a pretty typical “outflank” ability – and it is…for the most part. However, we felt like the Astra Militarum can optimize the heck out of this thing. Melta Vets + a Company Commander seem like an obvious choice. But don’t discount Plasma as an option. Heck, even a squad of 30 Conscripts showing up and doing “First Rank, Fire! Second Rank, Fire!” could be pretty bad for a LOT of armies… 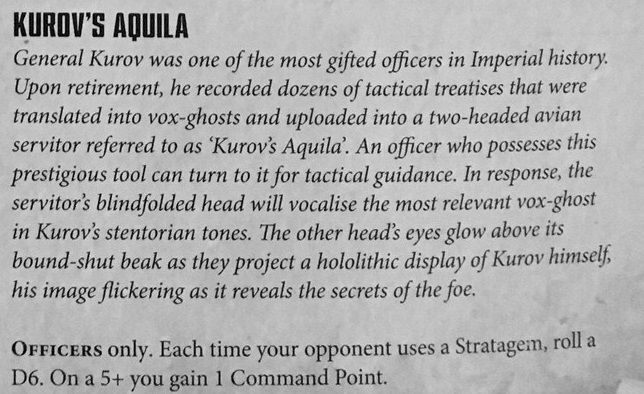 There is a particular Warlord Trait that allows AM Warlords to get back spent Command Points on a 5+ and if you bring this with you to battle, you could really extend your Command Point count. When the Astra Militarum can spend Command Points their Stratagems it can go south for their opponent really quick. 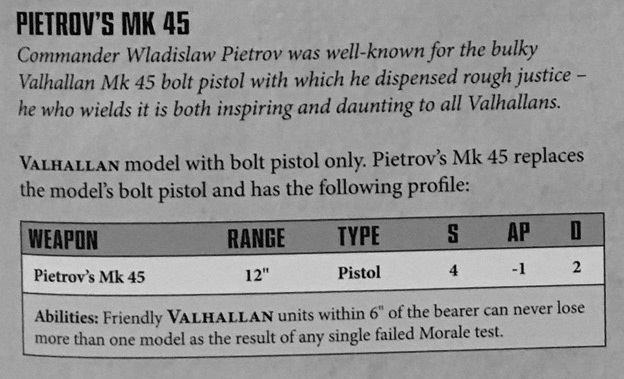 A pistol that is AP -1 and 2 damage is nice. But a Pistol that lets you replicate a Commissar’s ability is even better! This is probably going to end up with an officer who can issue orders anyways – why not double up on their effectiveness. 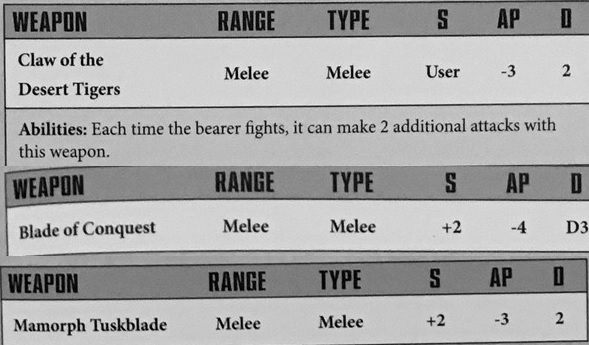 Let’s be honest – you never really expect much from a Guardsmen in close combat. That’s why we’re lumping all their Melee Weapon Relics together. There are restrictions on who can use which – but that doesn’t really matter. The fact is that if these are on a character like a Company Commander they have a good shot at slaying an enemy character in a fight. We liked them for the surprise factor and because they each have their own flavor. The Blade of Conquest pairs particularly well a few of the more Close Combat oriented Warlord Traits.

The Astra Militarum have quite a few more relics to choose from and each one definitely has it’s uses. There are more than a few combos we spotted when going over this book and we’re looking forward to seeing them on the tabletop.

Do you have a favorite relic already? Let us know in the comments below!