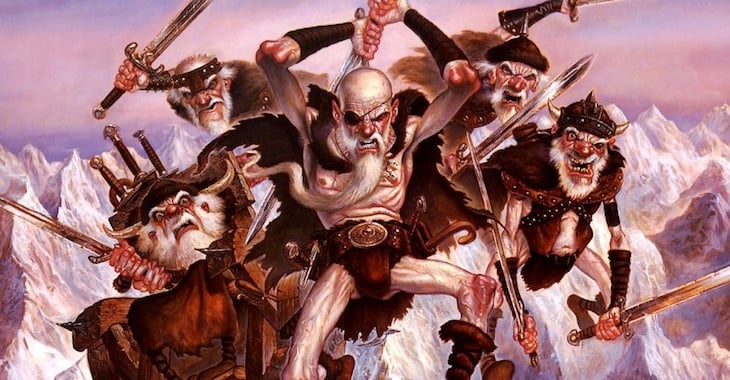 Ancestral Barbarians rage in as one of the new Subclasses in Xanathar’s Guide, and they bring along the whole family.

Joining the ranks of the Storm Herald and the Zealot, the Path of the Ancestral Guardian is the second of three Barbarian Paths appearing in Xanathar’s Guide to Everything. They are the protectors of their family, clan, or tribe, depending. They are the expression of the collected wisdom (and wrath) of their ancestors. They have a host of spirits that they can call on, using this power to aid their allies and smite their foes. Take a look:

Now, we’ve seen the Ancestral Barbarian before. A couple of times in fact. They underwent a fairly significant overhaul between their first appearance in Unearthed Arcana, and their most recent one. The most recent version of the Ancestral Barbarian, is pretty potent. They have the ability to call on their ancestors to protect themselves. You can summon spectral warriors while raging (you’re basically giving yourself over to those that came before), and as you fight spectral warriors will distract a foe you attack, giving you resistance against the target’s damage and disadvantage to the creature if it attacks a target other than you.

This alone is a powerful defensive ability, but then you also get the ability to reduce incoming damage with a reaction, consult with the spirits for a Clairvoyance spell once per rest, and eventually mitigate damage while harming foes–it’s a pretty solid class. And given how much it changed from its first version, I wouldn’t be surprised if we still see a few more tweaks to this one in the final version, but it feels like a fun class to play.

Especially since, for my money, there’s only one proper way to represent the ancestral guardians of one of these barbarians.

After all, you don’t get to be an ancestral protector by being a barbarian and FAILING to have descendants. I cannot tell you how much I’m looking forward to the idea of a barbarian flying into a rage and hearing:

“So that’s what passes for a rage these days, is it?”

“Oh yes, very angry. Frothing at the mouth. Not half as angry as your grandmother was when you didn’t write.”

“I WILL AS SOON AS SHE’S FINISHED HELPING ME KILL THIS OWLBEAR.”

“Owlbears used to be bigger, back in my day.”

“That’s the spirit! Now… when are you going to settle down and continue the family line…?”

And so on. This is the subclass that keeps on giving. 12/10 best Barbarian. Would play again.

Which of the subclasses we’ve seen so far are you interested in playing?